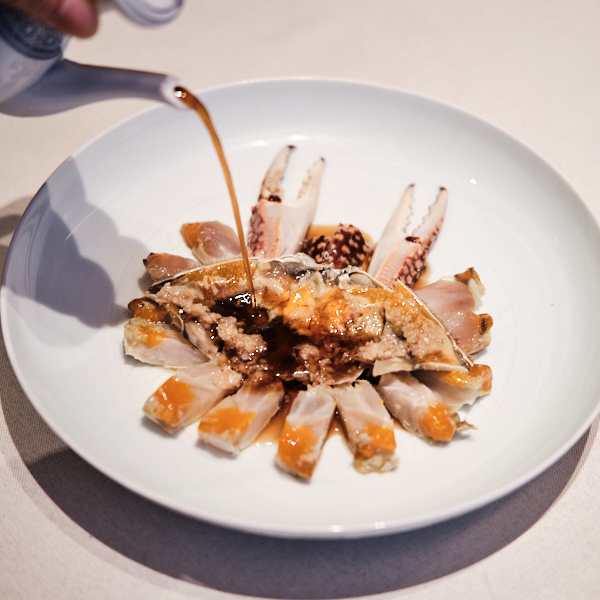 Rating: 4.25/5
One of the hottest new table in town is definitely Wing Restaurant - the new Chinese restaurant by Chef Vicky Cheng of VEA! For years the chef has paid tribute to his Chinese roots with his signature French x Chinese cuisine and now at his new venue, the focus is solely on Chinese cuisine where he will reimagine Chinese classics while combining Western techniques. Located just one floor below VEA, guests can expect the same level of service and hospitality that VEA is famous for at Wing. The menu will change seasonally and only a tasting menu is available now at HK$1780 per person.
We started our meal with 4 beautiful seasonal appetizers:
- Firefly Squid with Yunnan chili and bull kelp
- Mala Aveyron Lamb Belly with celtuce
- Snap Peas with house preserved pork belly
- South African Abalone with Hua Diao wine 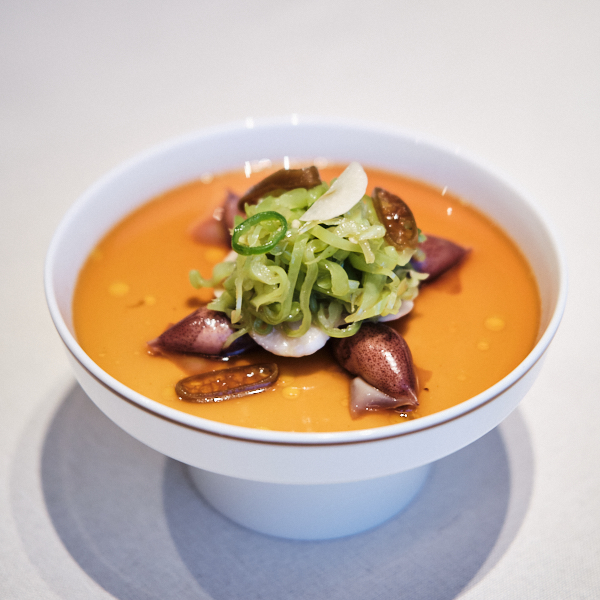 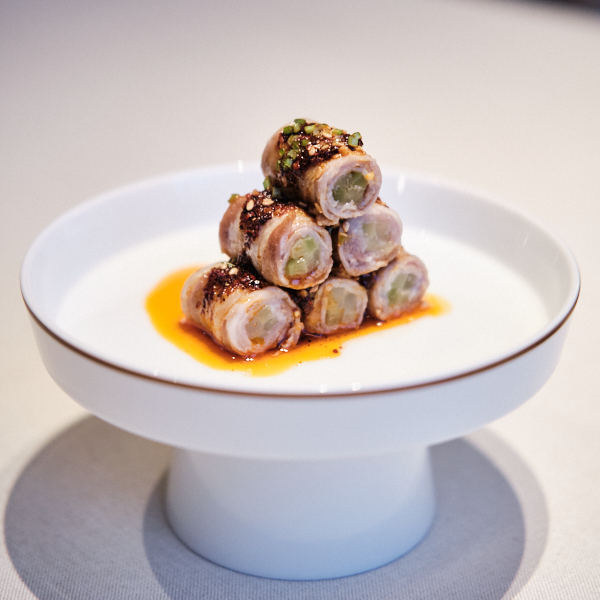 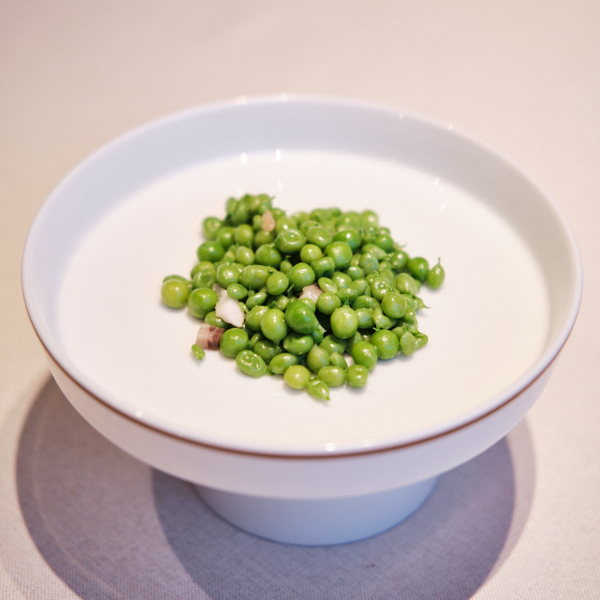 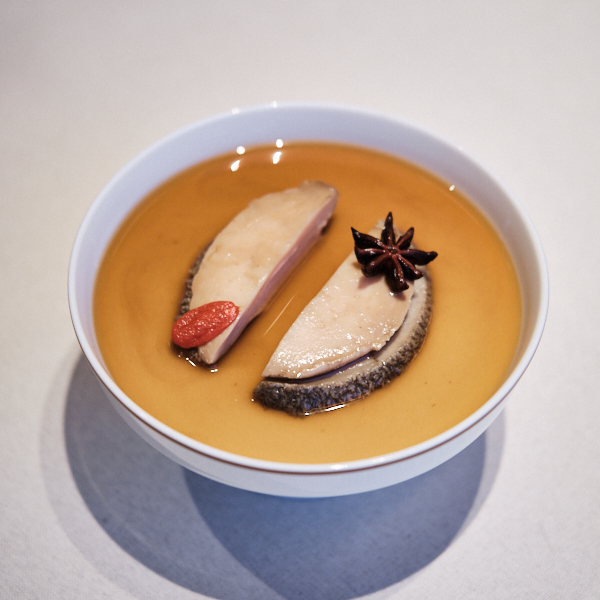 Then there was the showstopper Raw Salted Crab (add-on dish) which had been treated in ultra low temperatures to kill off any unwanted bacteria. Served with garlic and vinegar, the crab was full of decadent orange roes with the fine texture of ice lollipops.

Next was the Wing Fish Soup with Taiwanese cabbage, Japanese sweet prawn, and Tai O dried velvet shrimp. The super flavorful broth was made with 4 different types of fish and served piping hot. 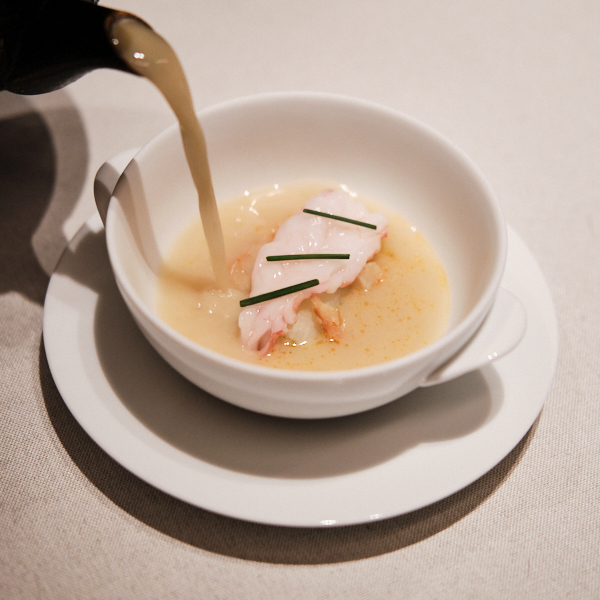 The last of our starters was the Wild Yellow Croaker with truffle honey which turned out to be my favorite dish of the meal! The fish had been deep fried where even the bones were edible but the flesh remained juicy. It was then drizzled with a black truffle honey which lent an irresistible hint of sweetness to the dish. 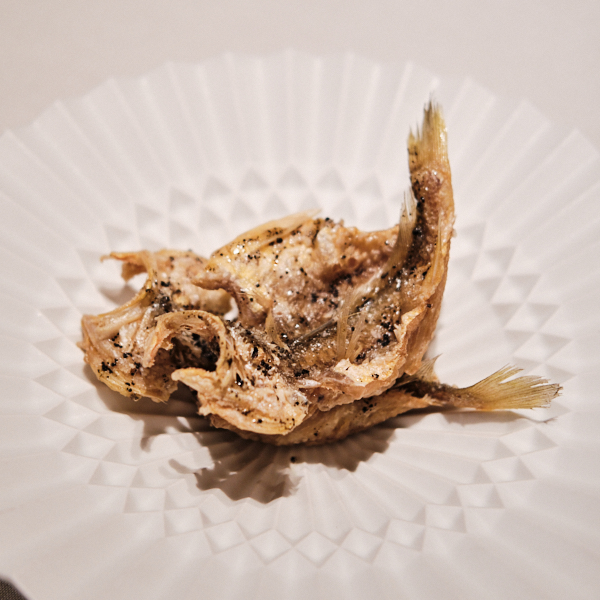 Our mains started with a soothing Chicken Oil King Crab Congee which was served table side and topped with crab meat, preserved vegetables and fried dough stick. 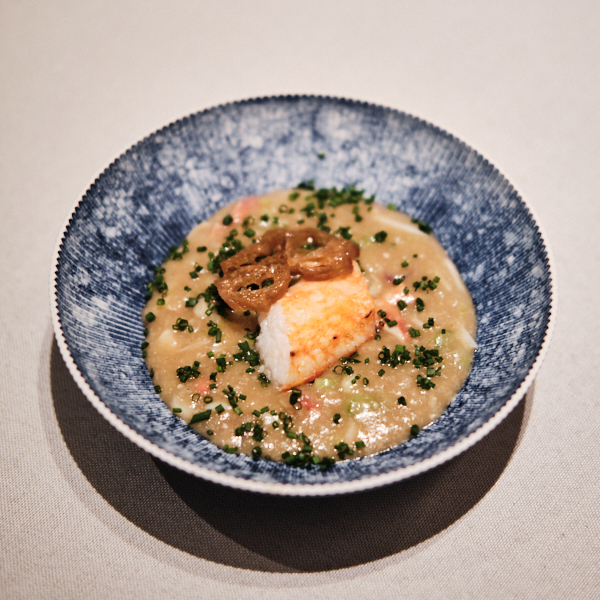 Followed by the Crispy Tilefish with leek and soy sauce which was first steamed and then fried resulting in a perfectly crispy skin and tender interior. While I loved both of the fish courses, I did feel that having two in the same meal was a bit too much. 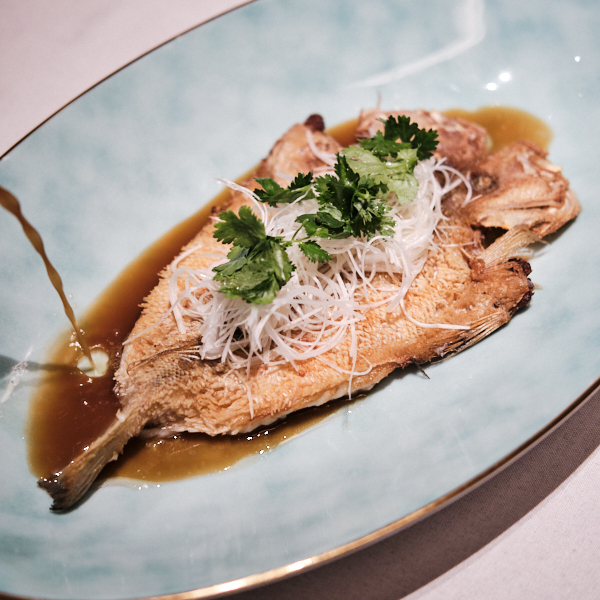 We then had a refreshing palate cleanser - Longan with hawthorn sorbet. 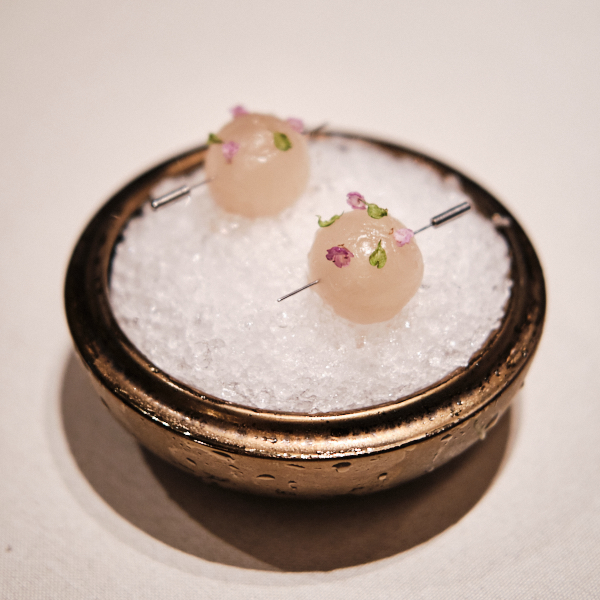 Then it was the Baby Pigeon with cane sugar where the pigeon had been aged for 3 days, then marinated and smoked with sugar cane for an elegant layer of fragrance and sweetness. 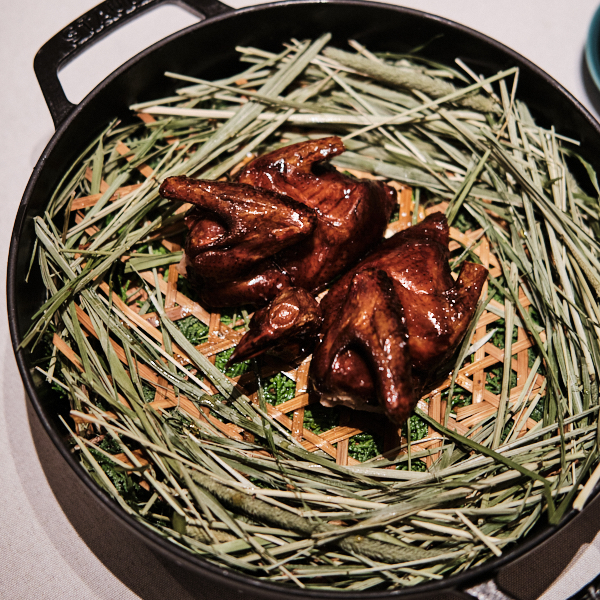 The Seasonal Vegetable with salted pork may seem simple at first, but the pork had been dry aged in-housed using Western techniques with a German-made machine. 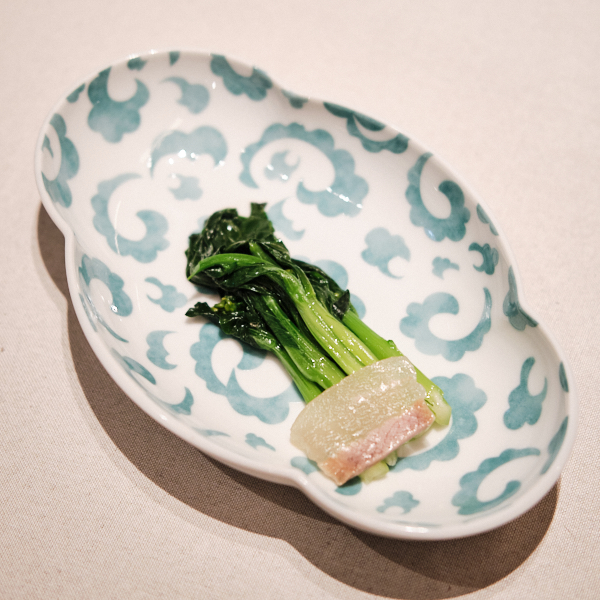 Most Chinese meals end with rice or noodles, and our mains ended with a Fish Maw with chopped chili and rice! For those who don’t eat spicy, there’s an abalone sauce version as well. 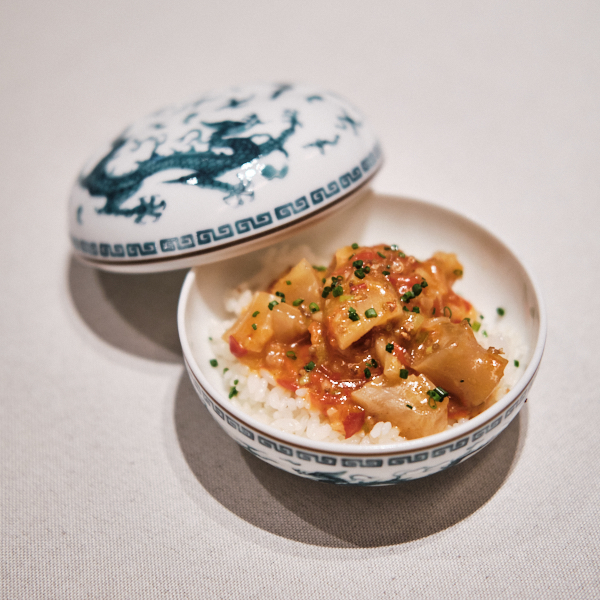 For desserts, the chef gave us one of his new creations to try - a nostalgic popsicle called 鳳仙 that is no longer in production! It is made with a banana flavored shell, vanilla ice cream and mango jam in the center. 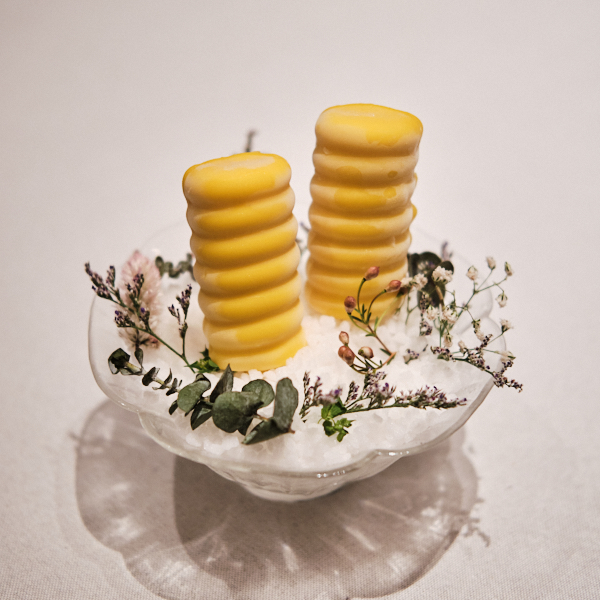 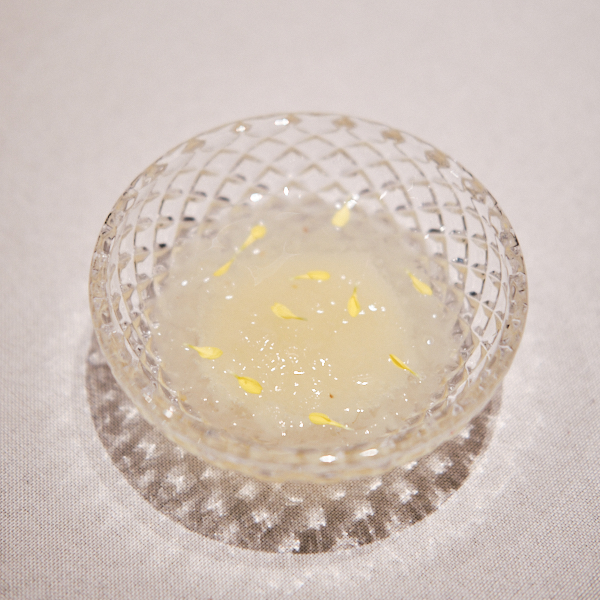 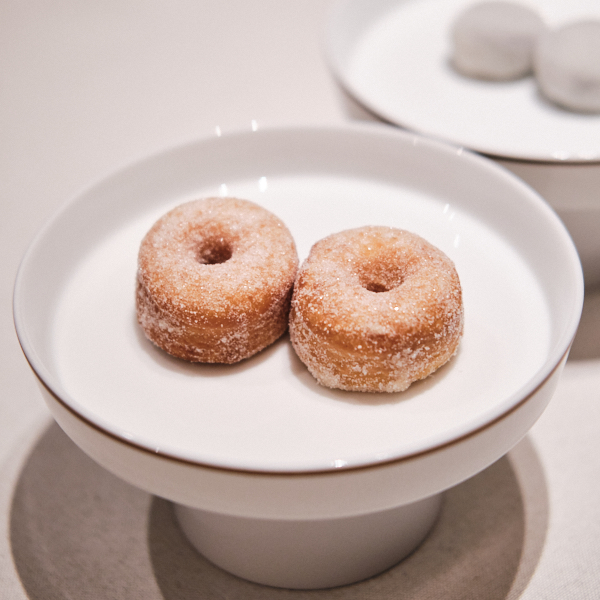 The last dish of the meal was seasonal fruits that were wheeled out on a trolley. So somewhere in my guest profile, the team noted that I don't like bitterness and they were concerned that the skin on the Kyoho grape would be bitter so they peeled off the skin for me - now that's service! Chef Vicky and his team at VEA had just won the Best Hospitality Award from Asia's 50 Best and obviously this high level of service is extended to Wing as well. 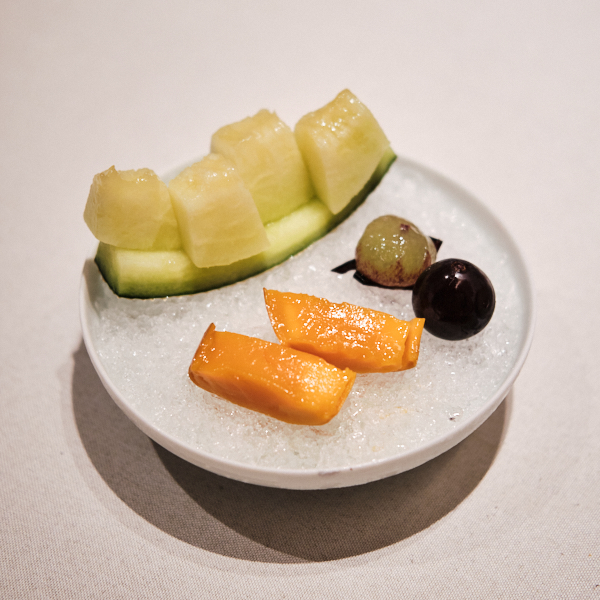