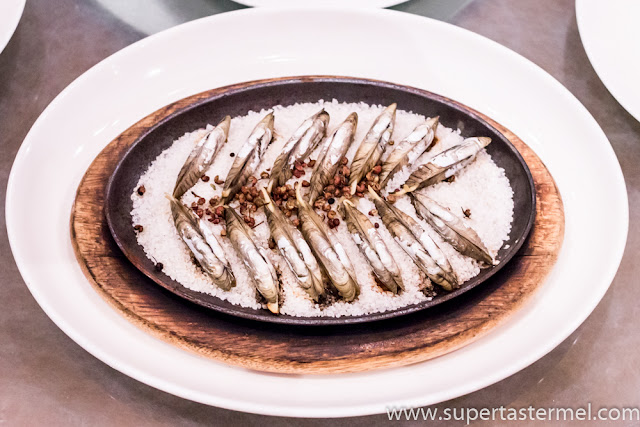 Doutou clams (哆頭蟶子) festival is happening at Putien 莆田 with 7 new dishes to showcase this golden shell delicacy until the end of August! What's so special about Duotou clams you ask? These clams are a specialty from Duo Tou village in the Putian area with over 600 years of history, and they are of superb quality due to the rare black mud in which they are bred which has lots of nutrients and little sand particles. They may look small compared to razor clams but this species is only supposed to be 6cm long with plump and meaty flesh. The restaurant originates from Singapore (which just received 1 star in the Singapore Michelin Guide by the way) with several branches in Hong Kong now and serves Fujianese (福建) cuisine which I've never had before, so I was excited to try the new clam dishes along with some of its classic signatures as well. 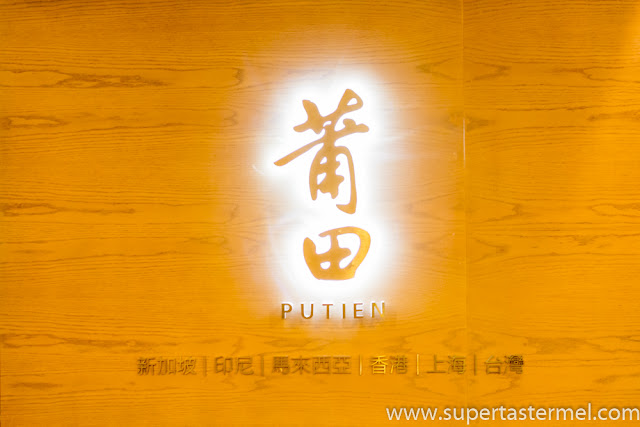 We started with drinks first and I fell in love in love with this Infusion by Mr. Qu which is a combination of two drinks and created by one of the restaurant's loyal patron Mr. Qu. The mixture of soursop, pineapple, green vegetables and plums was so delicious and refreshing that I ended up drinking 3 of these during the night! 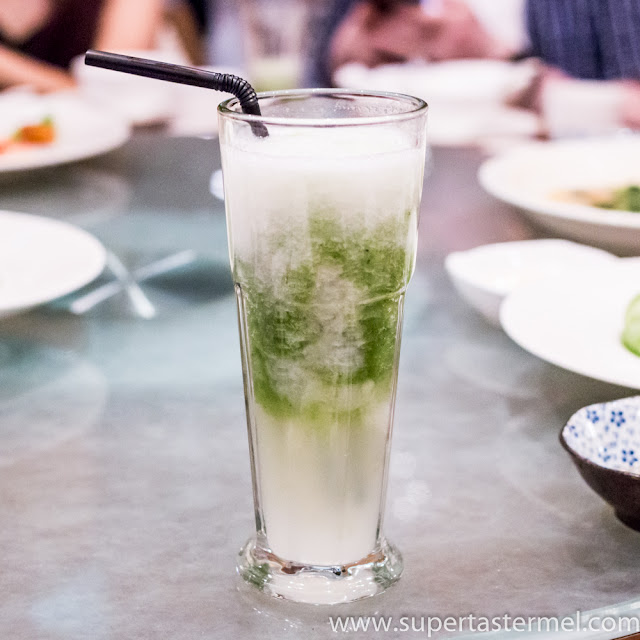 The Braised Pig Intestine is one of the signature dishes here where 12 inch-long intestines are meticulously washed, looped and braised with a house sauce containing 12 kinds of spices. Using only the delicate part between the large and small intestine, it is hand folded manually loop after loop before being braised for at least 45 minutes. This intricate and complex method ensures a springy texture with every bite and it is only available in limited quantity on a daily basis - I highly recommend trying this dish! 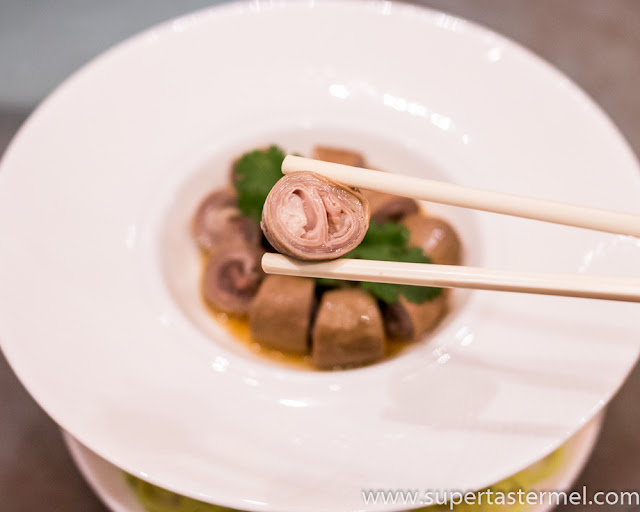 The Iced Bitter Gourd is an interesting way to serve bitter melon with crunchy strips that is served chilled and with a honey dip. I'm not a fan of bitter melon but it should be great for those who love it to be able to eat it in such a refreshing way. 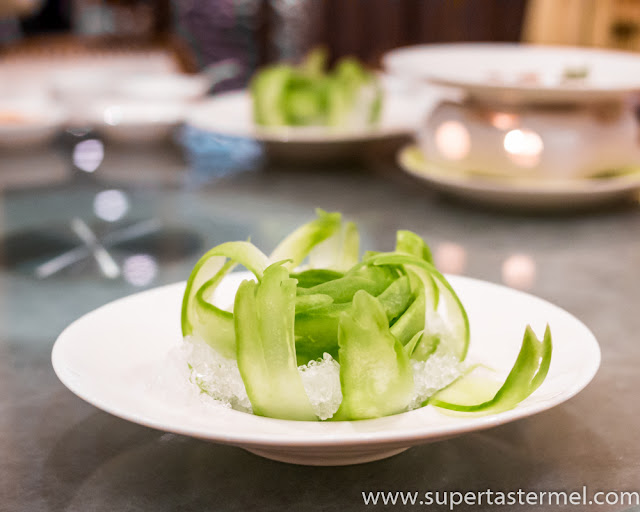 The Seaweed with mini shrimps was surprisingly delicious as the restaurant only uses 15cm-long top-grade seaweed that is harvested within 30 days after cultivation. 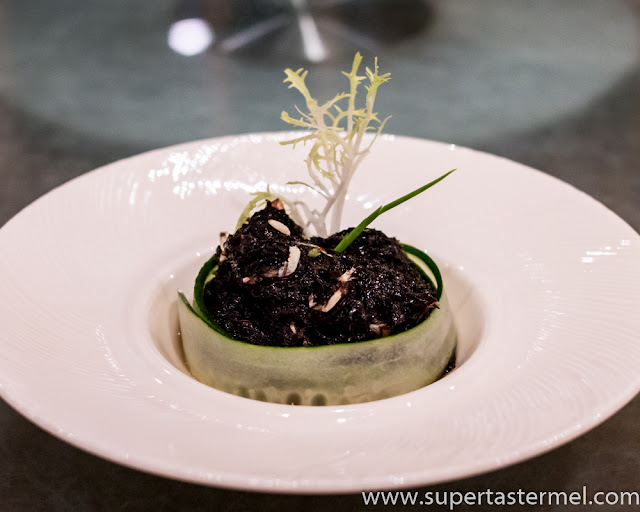 We then started our Duotou clams feast starting with the Stir-fried Duotou Clam ($98) which had been cooked traditionally with ginger and spring onion. 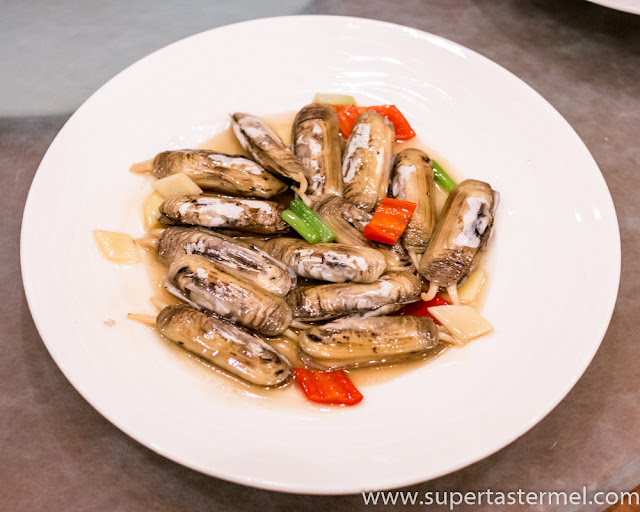 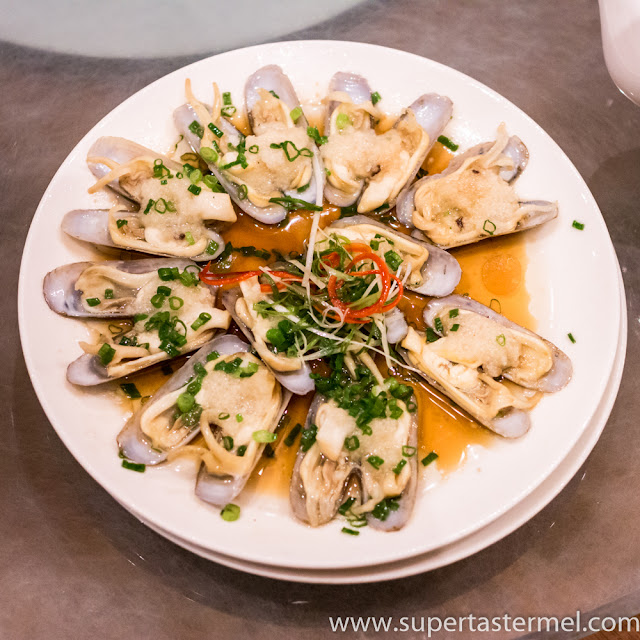 The Baked Duotou Clam ($98) served on hot plate with sea salt is highly recommended by the restaurant where you can dip the clam into the sea salt to eat. 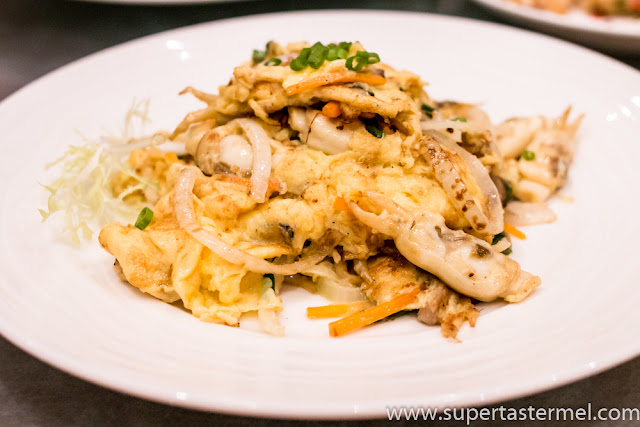 The Salted Spicy Duotou Clam ($108) which had been crisp and lightly battered with spring onions and diced chilies. 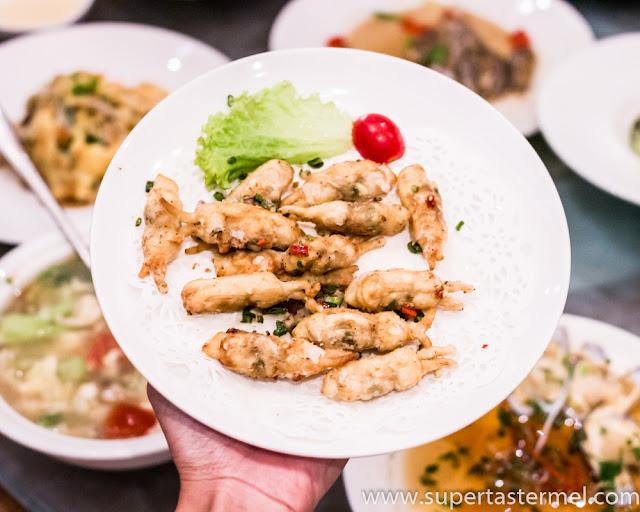 The Steamed Duotou Clam ($98) with the traditional Chinese Hua Diao wine turned out to be my favorite as the clams had absorbed the wine broth which was very delicious and soothing to drink! 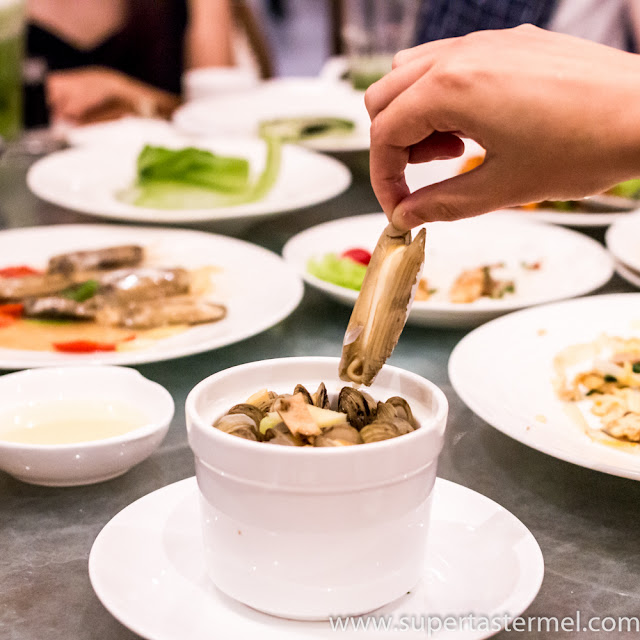 The Cereal Prawns was impressive as the prawns had been deep fried to golden crisp with egg floss, sliced chilli, curry leaves and cereal. It was interesting to use cereal as the crispy batter which added a distinct taste to the prawns. 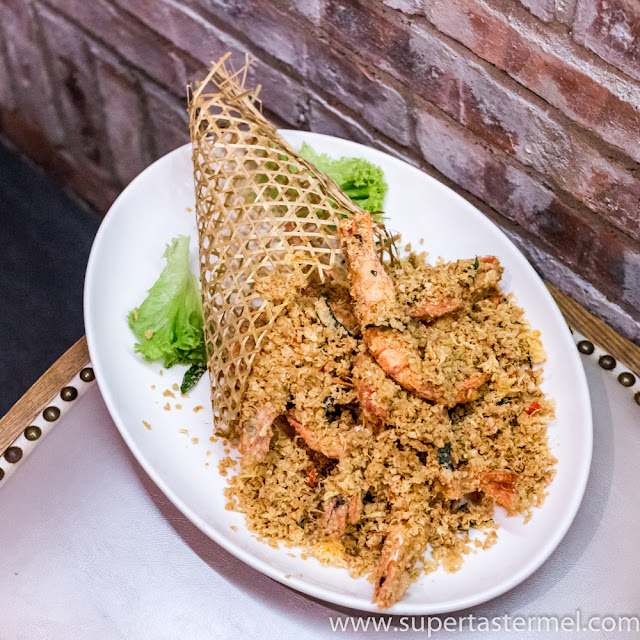 The Chinese Mustard Porridge was a crowd favorite and highly recommended by fellow foodies I was eating with! 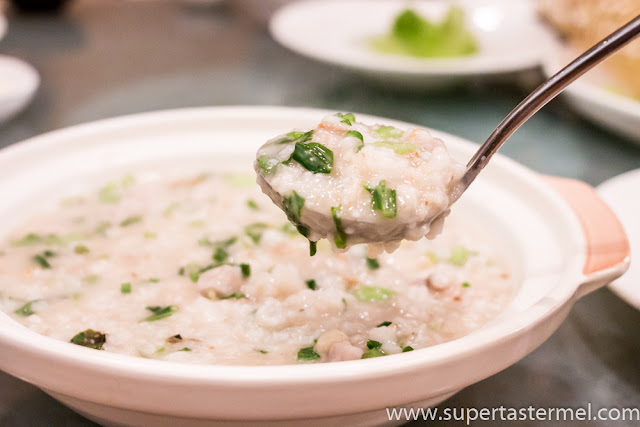 We went all out with the desserts as well as we tried some of the classics here including the Golden Rice Cake, Sweet Potato Balls and Putien Rice Cake. The Golden Rice Cake was probably my favorite of the bunch as it was like sticky rice cake with a deliciously chewy texture. 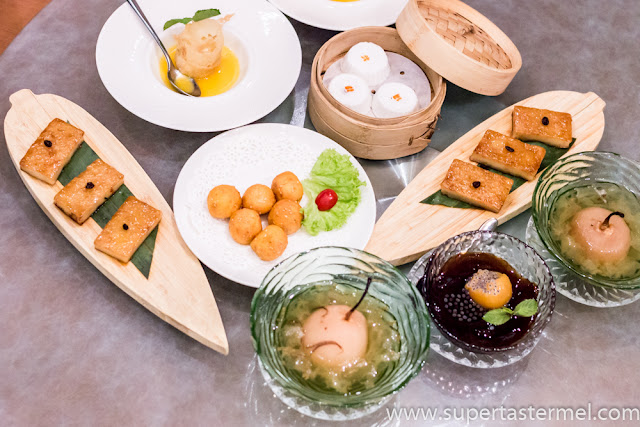 This dessert is for the durian lovers out there - Deep-fried Durian! 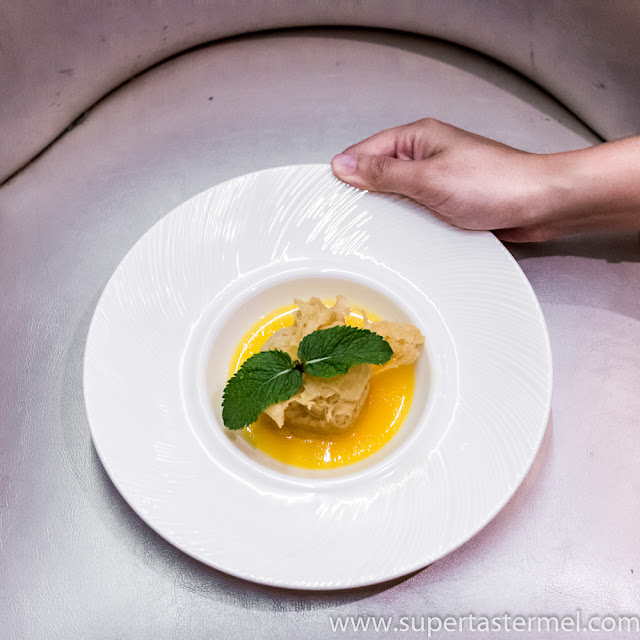 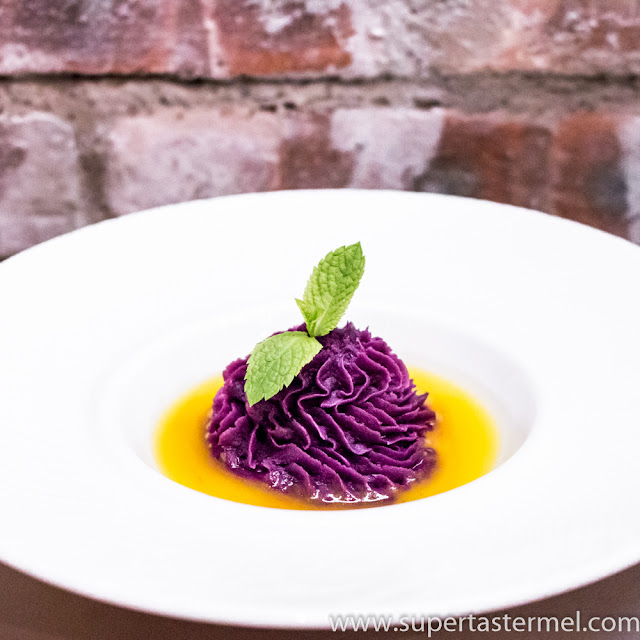