One of the hottest new opening in Amsterdam is Restaurant 212 which is opened by the former head chef and sous chef Richard van Oostenbrugge and Thomas Groot of 2* Bord’Eau. There are no tables at the restaurant; instead guests are seated at the counter surrounding the open kitchen to watch the action. The restaurant employs a ticketing system where you have a pay a deposit of €50 per person when making a reservation, and apparently they have been full every night since opening a few month ago. Two menus are available during both lunch and dinner - 5 courses for €108 and 8 courses for €138. We had the latter, and while not all dishes were a home run, we felt like there was a lot of potential and that Restaurant 212 is one to watch in Amsterdam. 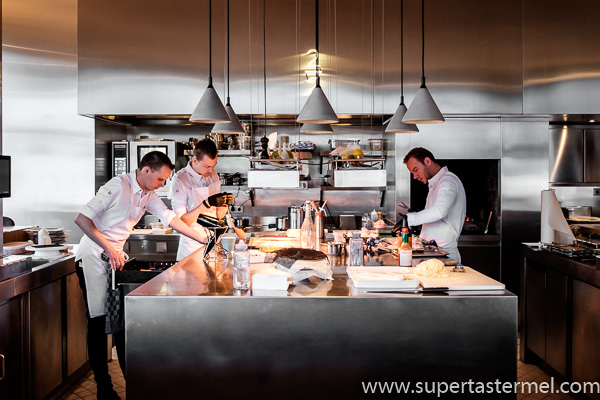 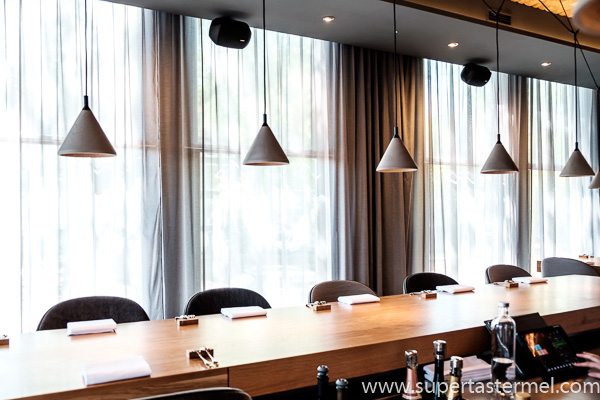 So the idea about the restaurant is to keep it simple and eliminate rules for fine dining; hence the tableware are tucked into a drawer at your seat so you can get whatever you need for each course. 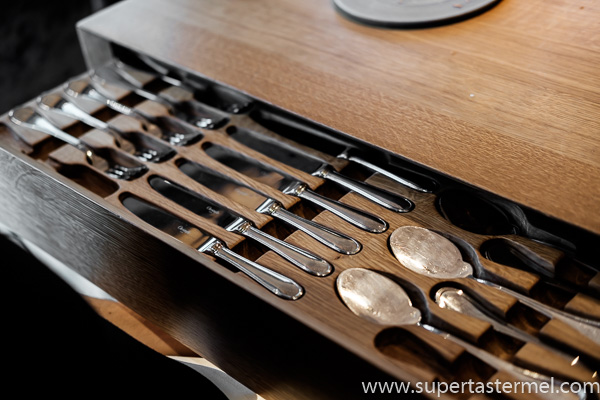 We started the meal with two delicious bites of fried chicken skin filled with sauce royale and salad of celeriac with cream of dill, XO sauce and shrimp. 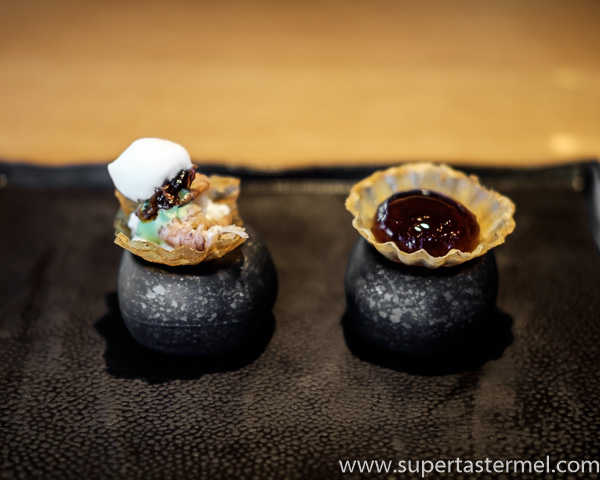 The next dish was an interesting play on bone marrow except that the "bone" was made of potatoes and the insides were filled with veal tartare while topped with cream and caviar. 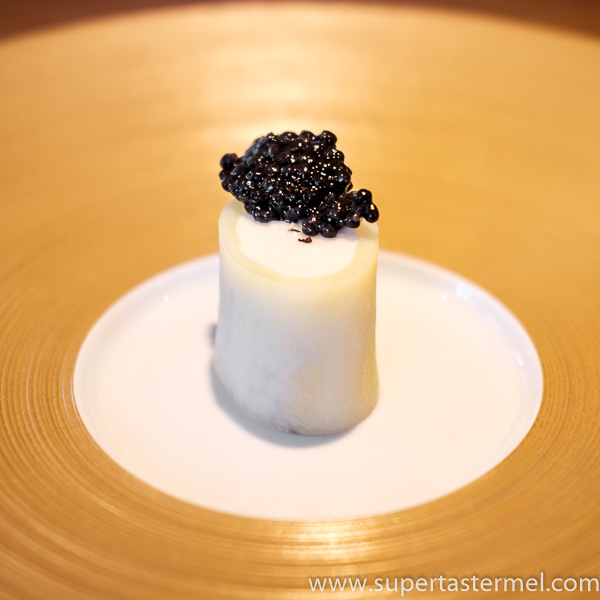 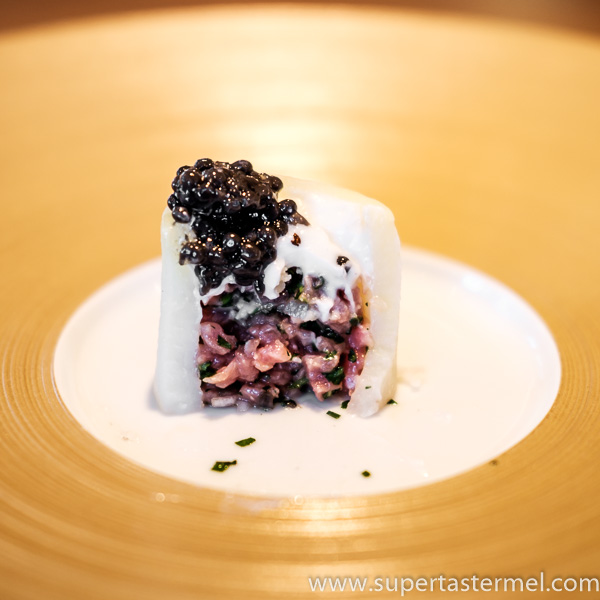 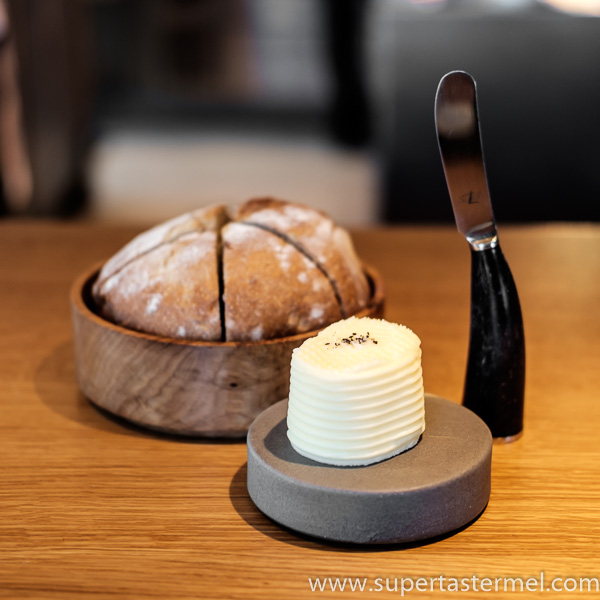 The first course was a Crab Salad with white asparagus and combat, bisque in egg yolk, and asparagus-bacon broth. The flavors needs some work here as it was a bit bland but what was most intriguing was the technique of injecting a broth into the egg yolk which was eerily similar to Eneko Atxa's famous Truffle Egg dish at Azurmendi. I mean I guess there's no copyright for techniques or a dish itself even but it just made me wonder if there was a connection there (by the way I did ask if they were inspired by Eneko's dish but they said they came up with it on their own). 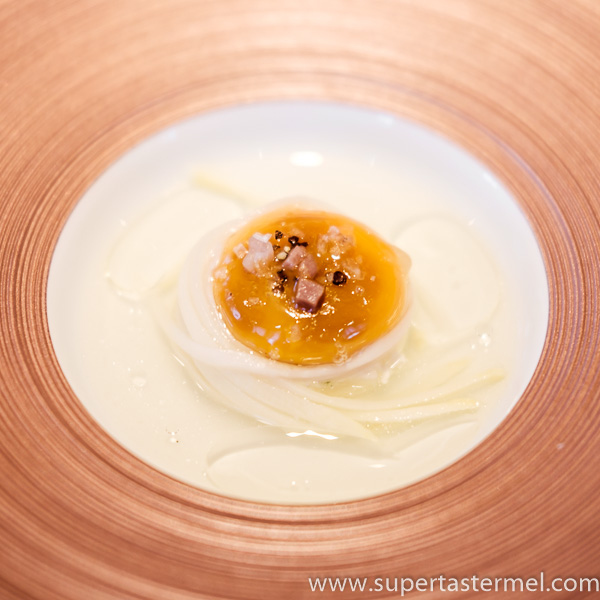 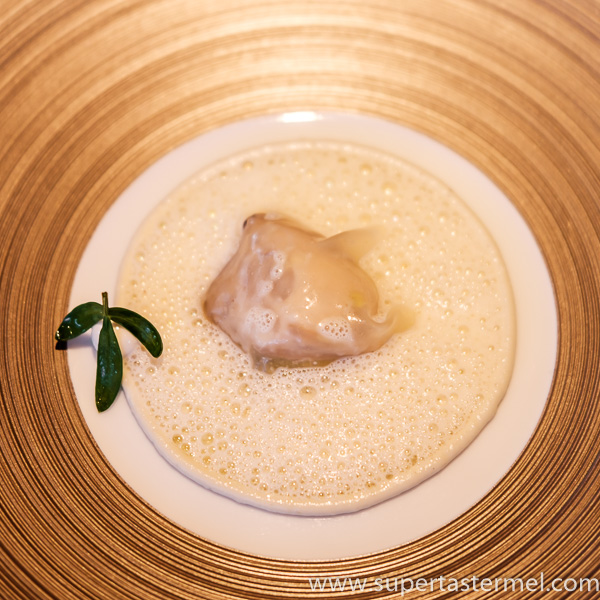 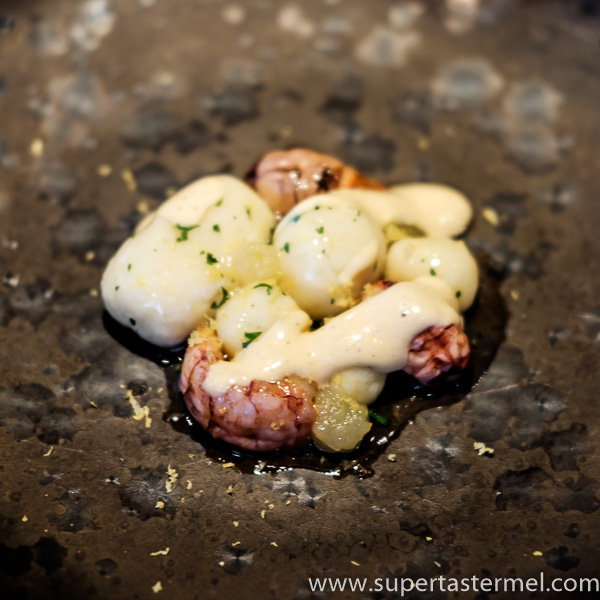 The Langoustine poached in duck-fat, dashi albufera, coffee, and katsuoboshi was the best dish of the meal! The coffee really shined through here and elevated the flavors of the langoustine. It was also the most mature and well-balanced dish on the menu so we were not surprised to learn that it was derived during the chefs' time at Bord'eau. 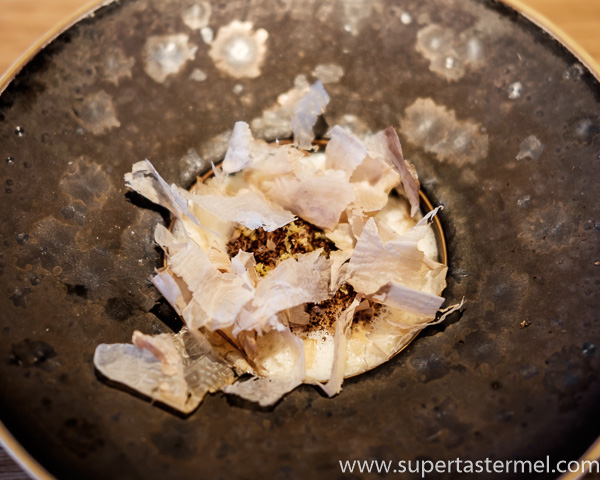 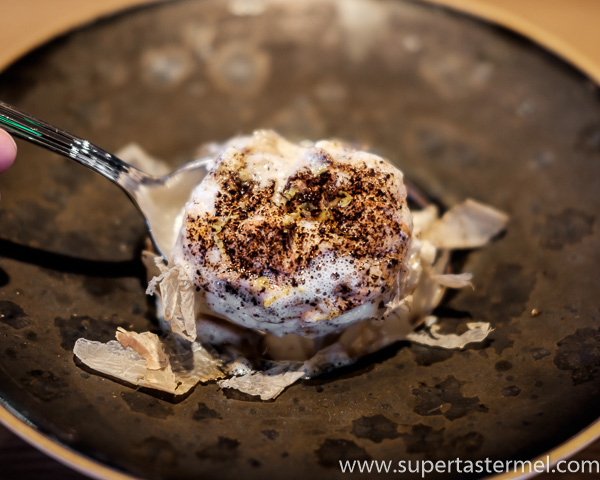 The Monkfish with bacon, onions, and black truffle rub, oxtail vinaigrette, BBQ aubergine, and monkfish liver would have been better if the rub wasn't so overpowering - it was too salty and ended up overshadowing the natural flavors of the fish. 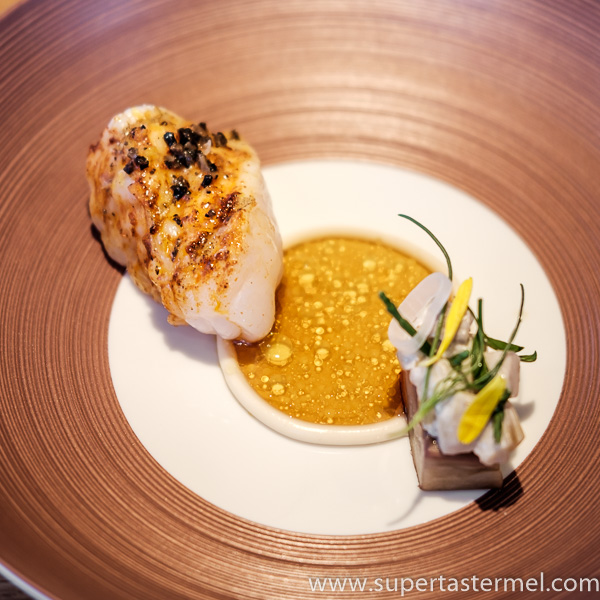 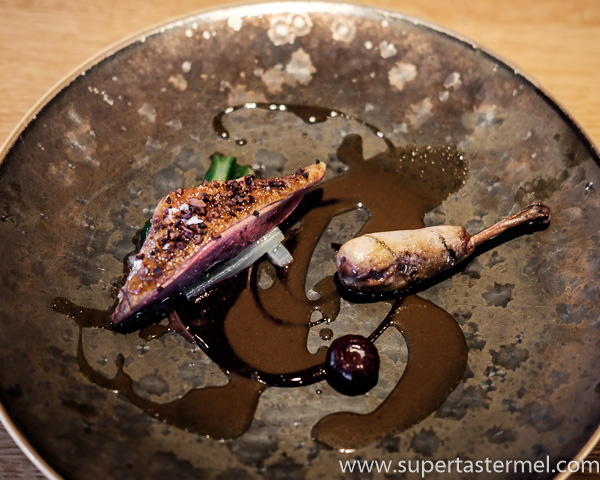 We didn't order the cheese course but had to admit it was impressive when they started unveiling all the cheese they had in stock! 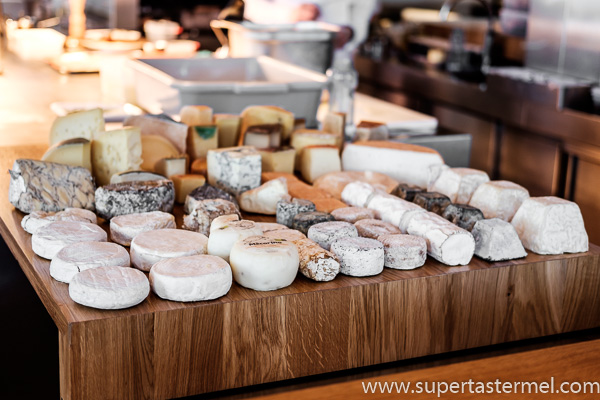 The first dessert was the Frozen Souffle with avocado, jalapeno, and spruce. I thought that the ingredients used were very creative and bold, and they managed to make the spiciness work nicely in a sweet course. 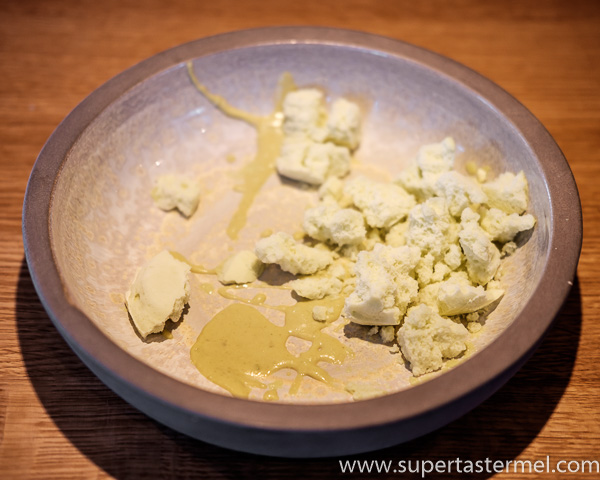 So we have been watching one of the staff make numerous candy shells throughout the meal and finally found out what it was for in the final dessert... 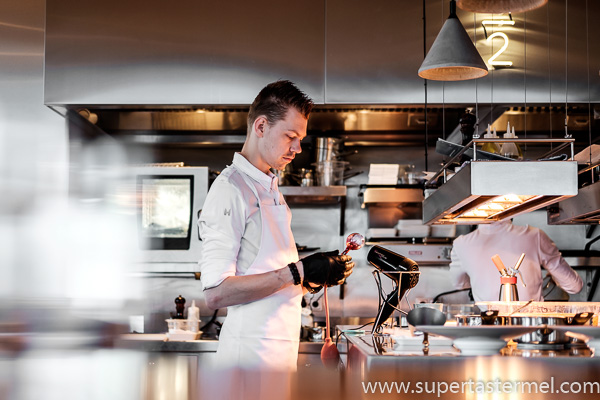 The first part of Cherry's was the candy shell filled with cherry-umeboshi foam and crumble of black olive and crispy walnut while the sorbet of whisky sour and Amarena cherries made up the second. Cherry is not exactly my favorite ingredient for a dessert as it ends up tasting like cough syrup most of the time, and I didn't really like the flavors here especially with the whisky (though it probably has to do more because of my personal bias than their execution). 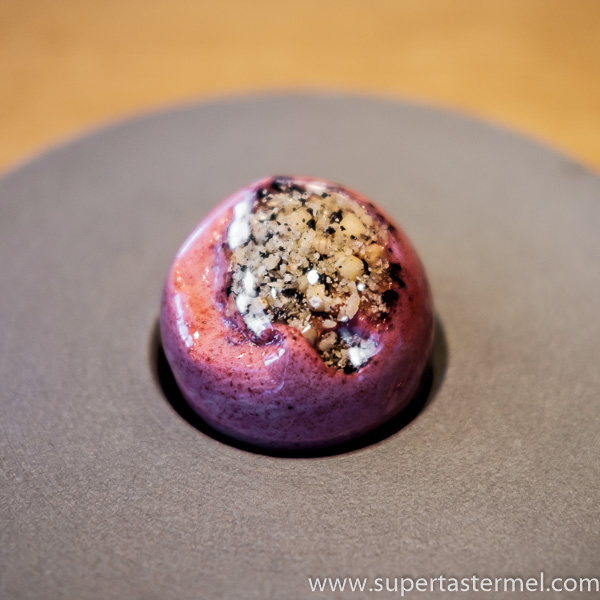 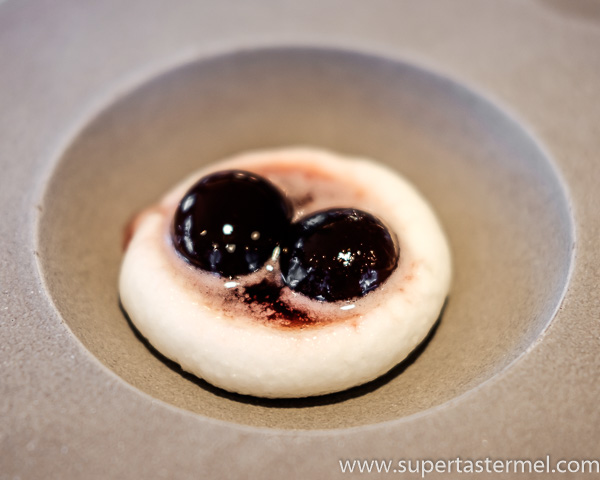 Lastly they offered us a sweet treat of chocolates in 5 different flavors (and yes I tried all of them)! 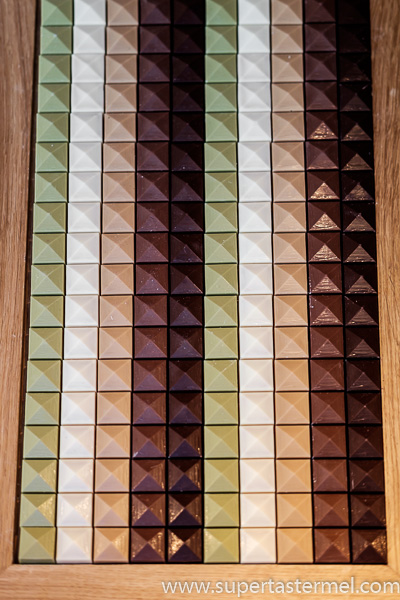 Overall we had a great time at Restaurant 212 and I especially enjoyed the warm and friendly interactions with the chefs in the kitchen. Some of the dishes just needed some more tweaking and in due time I'm sure the food will become even better given the raw talent that we saw during our meal.