After Singapore, we're headed to Europe and our first stop was Copenhagen to check out Noma 2.0 for its ocean menu! Whenever I tell people that I’m going to Noma, I always get asked “how did you get a reservation?” Well there’s no secret really - you just have to plan and book in advance! For the seafood menu which ran from January to June, the reservations opened back in October so I had booked my table 8 months in advance. Noma usually announces when reservations will open on social media, and if you subscribe to their newsletter, you can also get early access. If you don't get a table at first, sign up for the waitlist - cancellations happen more than you think so who knows, you may just get lucky!
Noma currently serves 3 seasonal menus depending on the time of year - Game season during winter, Ocean season during spring, and Vegetable season during summer. According to the latest newsletter from the restaurant, this vegetable season will be its last in Copenhagen this year with plans to travel to another part of the world for a pop-up. Next year will be the 20th anniversary of the restaurant and supposedly the last year of Noma as we know it. Big changes are coming and as always, all eyes will be on them to see what they will do next! 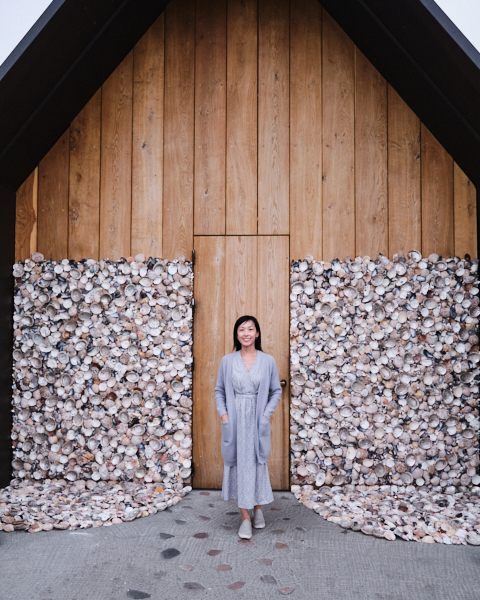 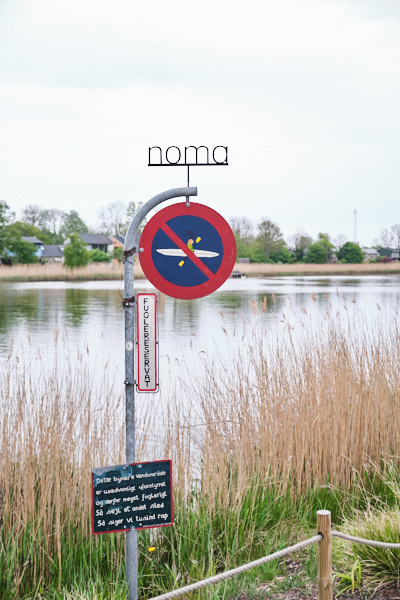 The seafood season menu started with an aromatic warm Crab Broth served in its own shell! We had to drink the broth straight from the crab’s mouth (you can watch a video of me drinking from the crab here). In continuation with the crab broth, we then had the meat from the bodies and claws of the Stone Crab which was paired with Scandinavian shrimp and fresh salted hazelnut milk - the crab meat with the hazelnut milk were a fantastic match. Much to J’s dismay though, we were told not to eat the bed of seaweed holding the crab meat. 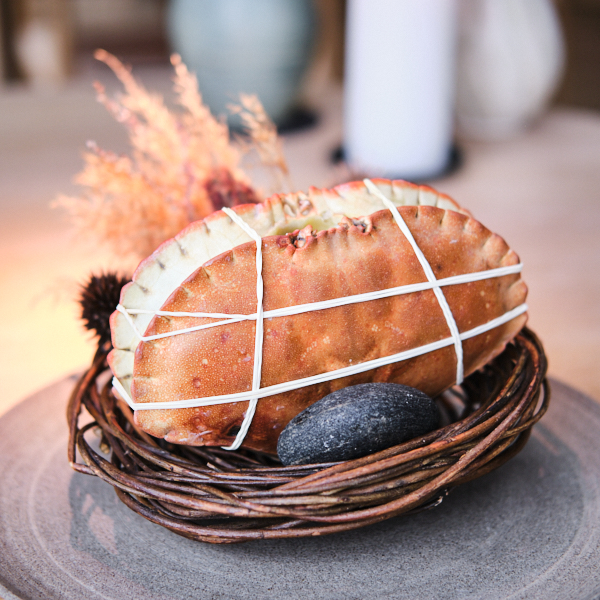 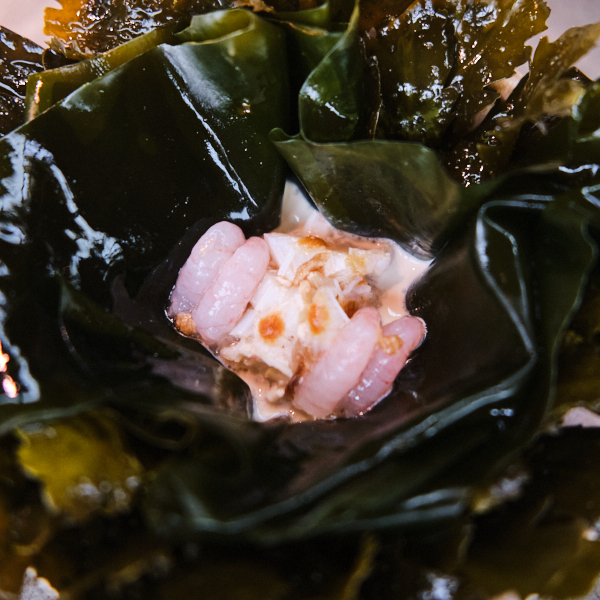 Continuing our meal with a gorgeous Danish Blue Mussel which was lightly cooked in a smoked Lapsang tea, stuffed with a pickled & smoked quail egg, and served with a bit of chili! The flavors were lovely here and I loved the presentation which looked like an eye. 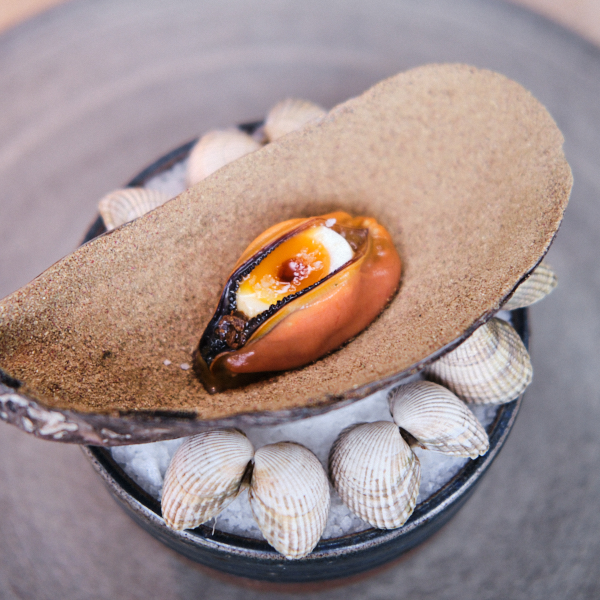 One of my favorites was this Scallop Steak featuring a Norwegian diver scallop which was dressed in seaweed butter. On the side, we had the adductor muscle and coral from the scallop plus horseradish paste, and we were told to eat the scallop like a steak by pairing each bite with a good amount of horseradish. The scallops were kept in a tank right before serving so they were as fresh as it can be! 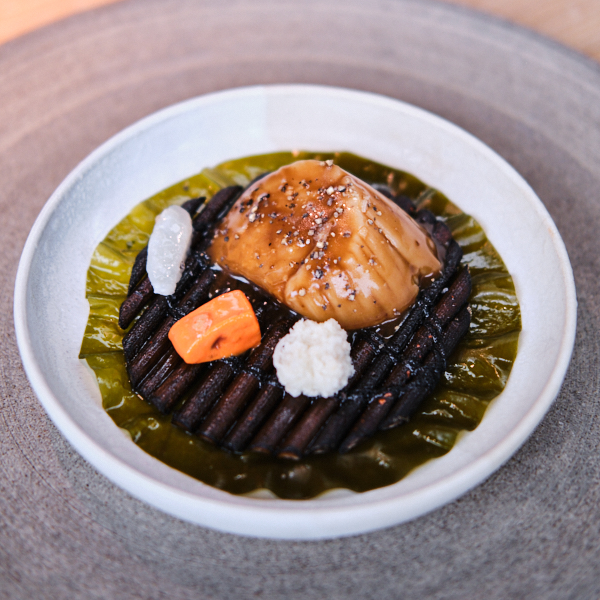 Seaweed Salad marinated in white currant juice and served with frozen shrimp mousse - an airy bite where the mousse immediately dissolved on our tongue. 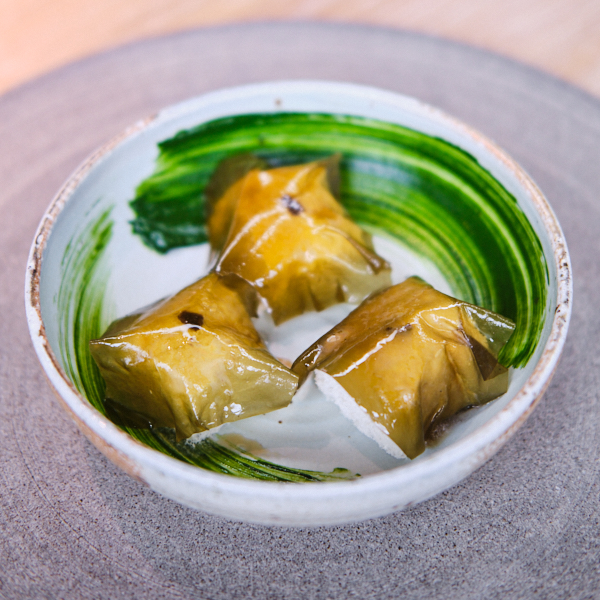 The next dish was from this unique looking lumpfish commonly found in the waters around Denmark. Its danish name translates to rock fighter since it has a suction cup underneath its mouth where it can grab on to a rock in water currents. From the fish, we had Cured Lumpfish Roe with ramson shoots in a beautiful sauce made with roasted yeast and last summer’s roses. Fresh Oyster covered with a slice of apple cooked in sloe berry gel and served with sauce made with jasmine tea and gooseberry - while I liked the sauce, the flavor of the oyster kind of got lost amongst the other ingredients. Another highlight was this Danish Squid cured with kelp sediments, lightly poached, and dressed with a spice mix made from smoked pumpkin. On the side, we had dried poppy pods to shake for seasoning (like salt and pepper) and added texture! 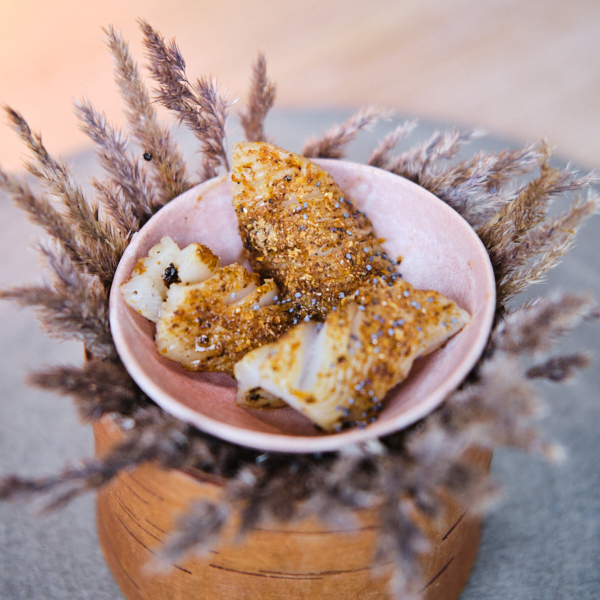 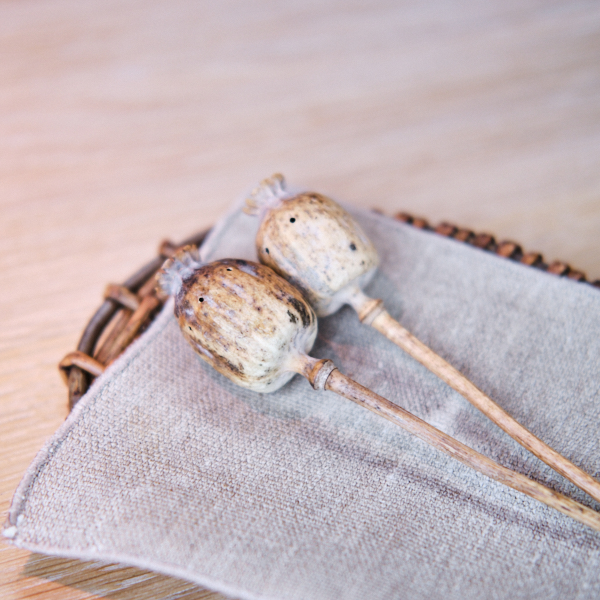 Up next was this amazing Sea Snail Skewer where the shell had been carved into a skewer! On the skewer was black truffle, sea snails that had been cooked in koji oil, venus clams and sauce made of saffron. 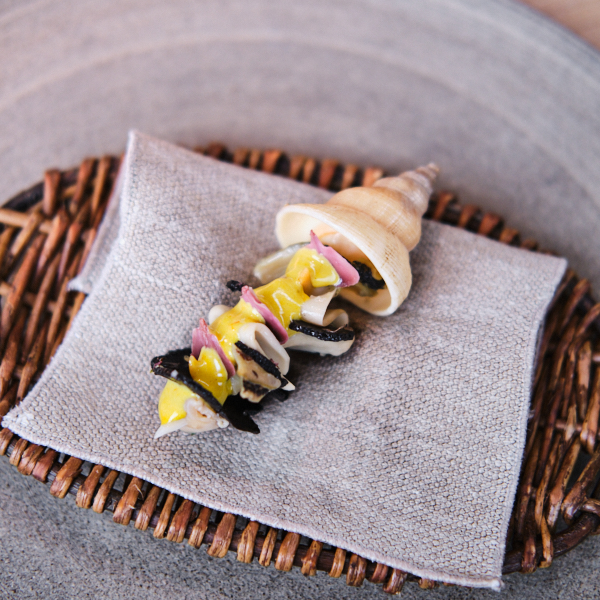 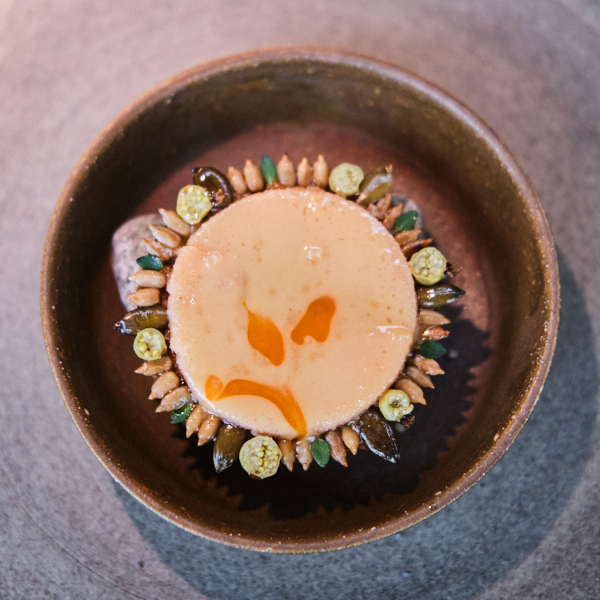 Danish Sole Soufflé stuffed with cod mousse and dressed on top with a paste made of chili, tomatoes, Madagascar pepper and smoked pumpkin. Paired with cabbage and sauce made with butter and mustard seed oil, this was easily another favorite with its exciting spicy flavors and smooth buttery texture. 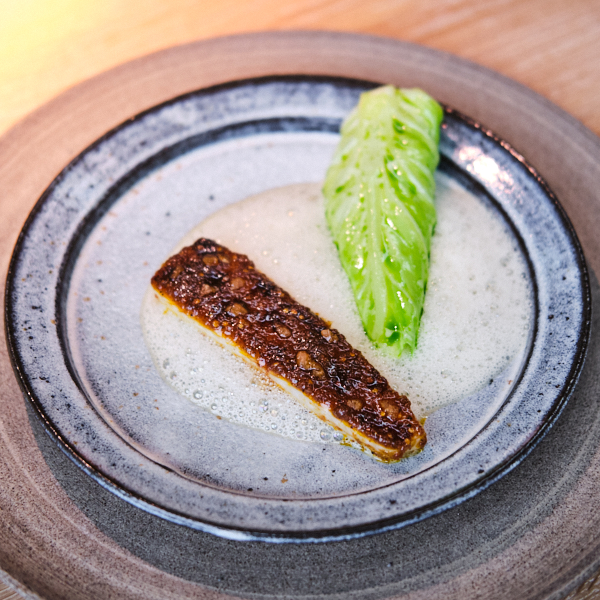 A whimsical savory Eclair dressed with an emulsion of oyster and parsley, and topped with sturgeon caviar. Unfortunately the flavor balance was off here and saltiness of the caviar overwhelmed each bite. 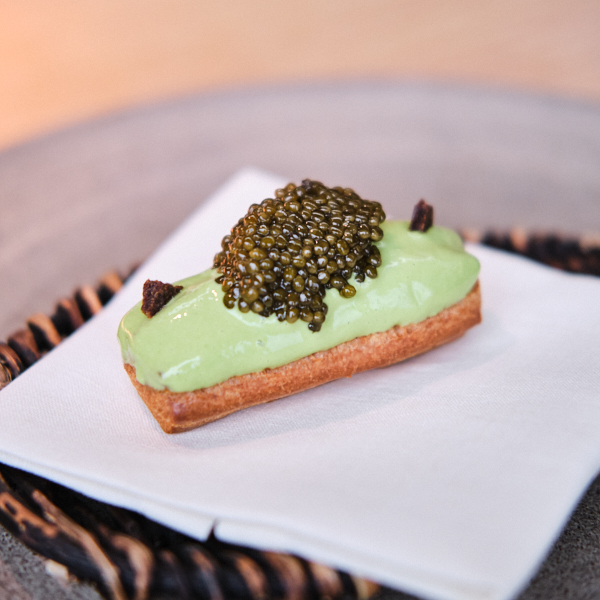 Finally the main course was this Norwegian Langoustine cooked whole with each part of the body dressed differently! The head is dressed with seaweed butter and chili oil, the claws with pine salt, and the tail (plus the little legs) with butter and salt. On the side, there was a butter sauce infused with mussels in a conch shell and a wedge of Japanese quince for acidity. It's not the best langoustine I ever had (that honor goes to Los Marinos Jose), but the langoustine was cooked nicely nonetheless. 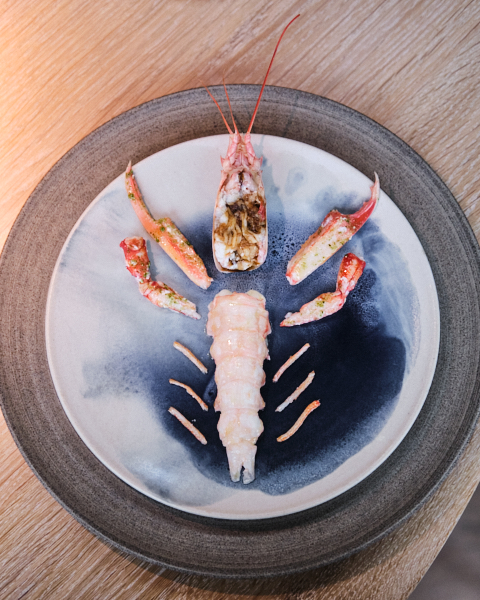 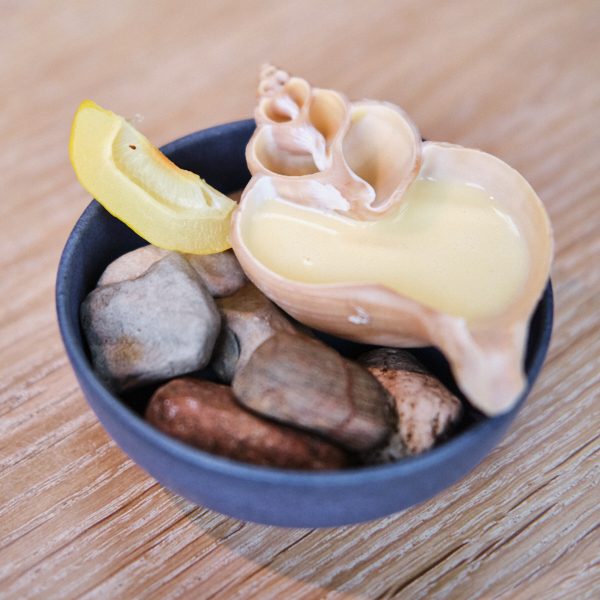 For desserts, we started with the Shell made with kombucha, kiwi and roses with herb and seaweed in the middle. 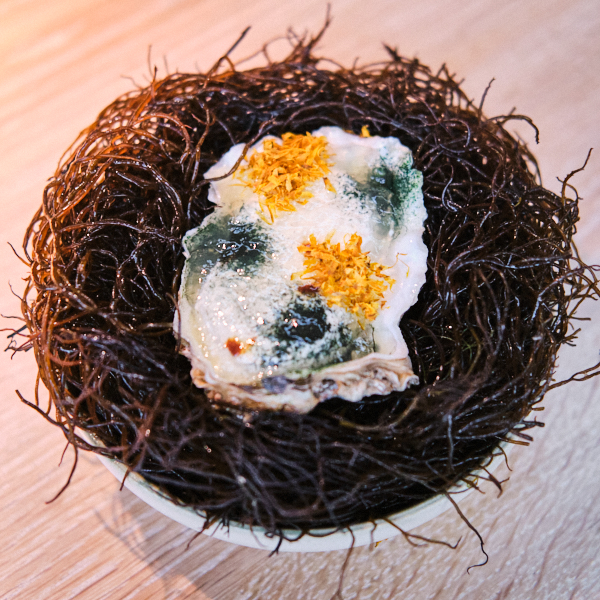 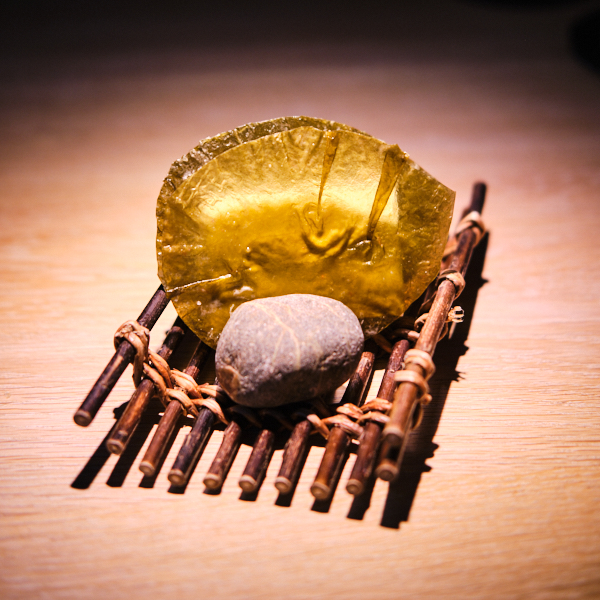 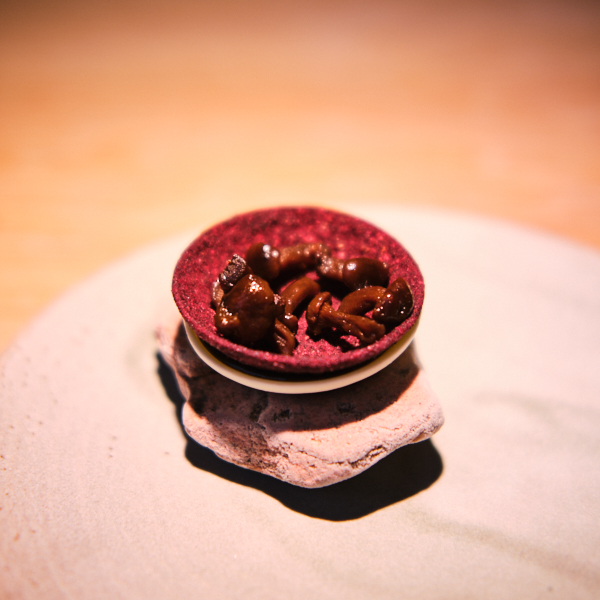 Towards the end of our meal, we were treat to a sight of double rainbows from our table - what a great way to end the night! 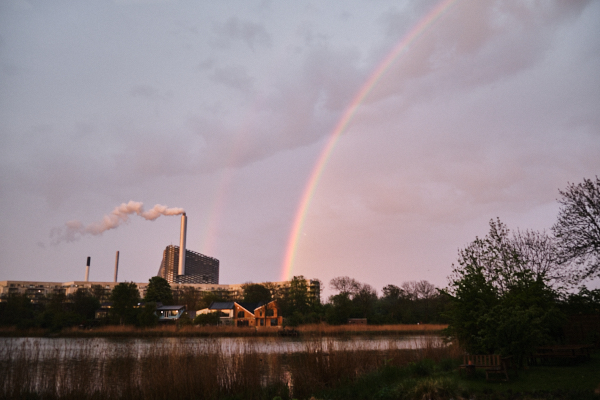