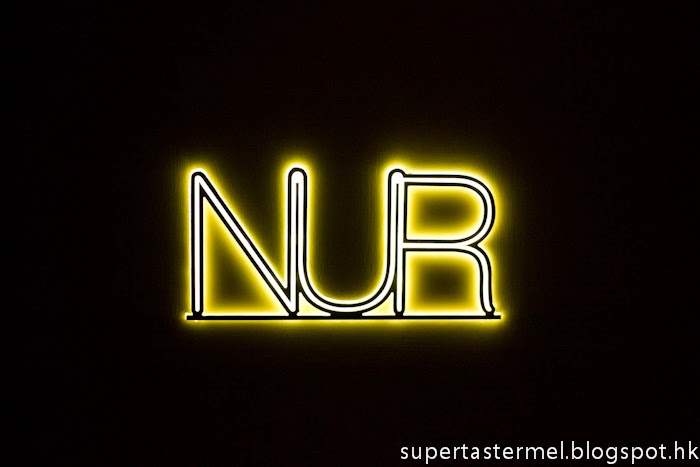 NUR is here to deliver nourishing gastronomy to Hong Kong! Nourishing gastronomy is the art of gastronomy from selecting ingredients to eating while intertwined with a respect for nutrition. Having worked at Noma (one of the top restaurants in the world), the head chef Nurdin Topham believes that food should not only be tasty but also nourishing to our bodies. The restaurant name NUR takes after the chef's name and means light in Arabic. It’s the feeling that the chef wants his customers to experience while eating at his restaurant.
The restaurant has only opened a few weeks ago and I hear it can get booked up to a 2 weeks in advance - probably since they only do dinner with one seating only. Luckily, one of our friends snagged a reservation a few weeks ago and we all enjoyed a lovely dinner with great company! 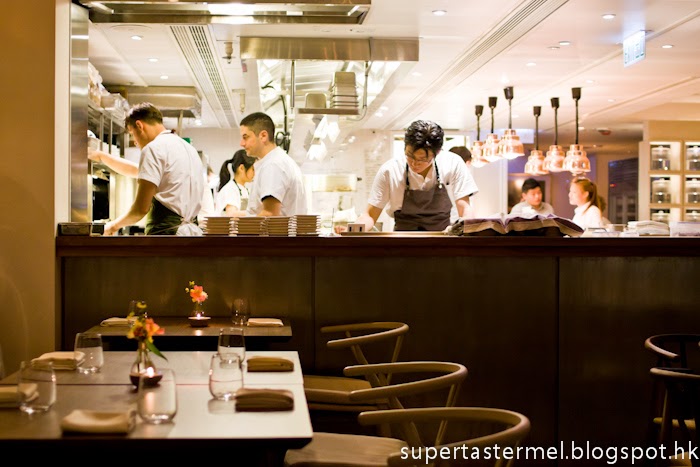 Upon entering the restaurant, we were greeted with the sight of a vast open kitchen which allowed us a glimpse into the actions of the chef and the staff. The decor was casual with white, teal and blue furnishings with strategic low lighting. Plants surrounded the restaurant which made us feel like we were sitting in a garden (plus there is an actual garden on the patio). 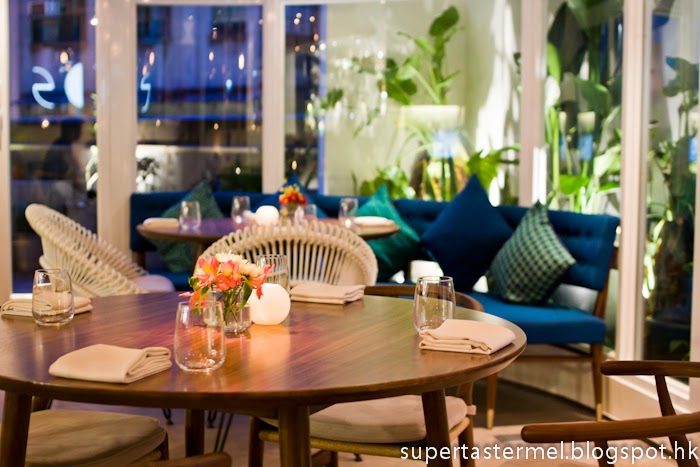 For dinner, there were only 2 choices with a LIGHT 6-course set at $788 per person and a FEAST 9-course set at $988 per person. Since it was only a $200 difference, we all decided to get the FEAST, which ended up being an excellent choice as we got to sample more of the chef's mastery.

Before our dinner officially commenced, we were treated with a few starters including a beetroot taco, slow-cooked carrots, and cucumbers. All of them were refreshingly delicious, especially the unique combination of the beetroot taco with watercress emulsion. 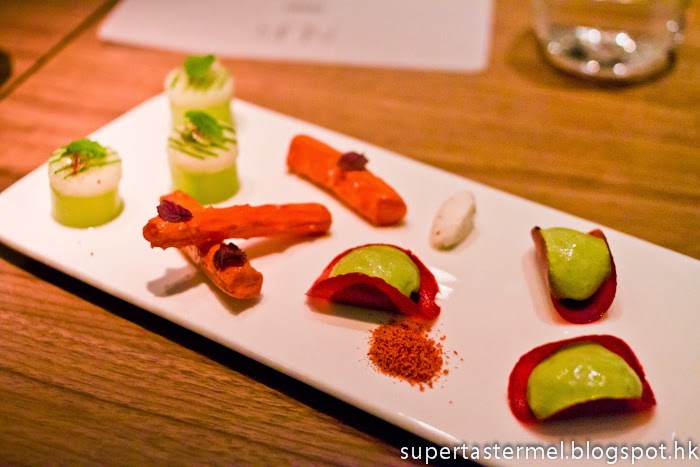 The palate cleanser of Jasmine kombucha with pear, roselle and mint was absolutely thrilling to drink with its tart and acidic flavors! 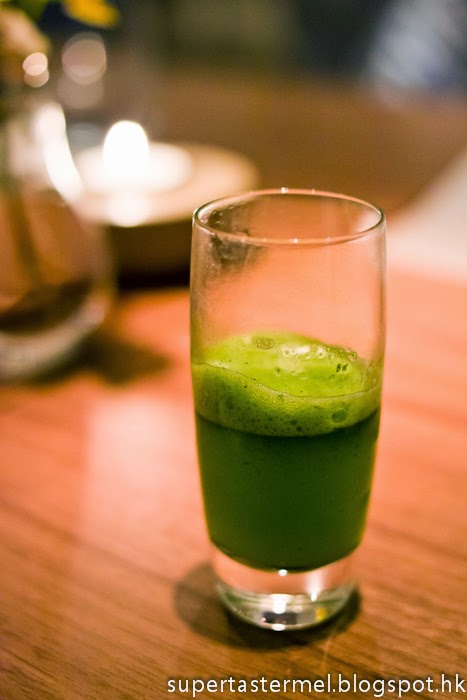 OYSTER (5/5) - the Gillardeau oyster was served with a wasabi foam and pearled cucumbers. As it was slightly poached, the texture of the oyster remained tender while the flavors of the ingredients came together in an amazing way. The warm rocks under the oyster shell was a nice touch and showed the attention to detail of the chef. 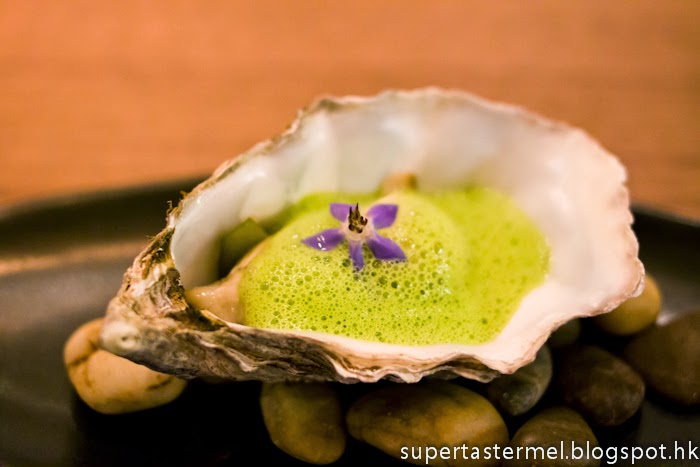 TOMATOES (5/5) - the Zen heirloom tomatoes, king crab and herbs came with a tomato water that was poured at the table. The tomato water was just scrumptious to drink while the tomatoes were delectably sweet! The flavor of the crab was subtle and blended in with the rest of the dish nicely. 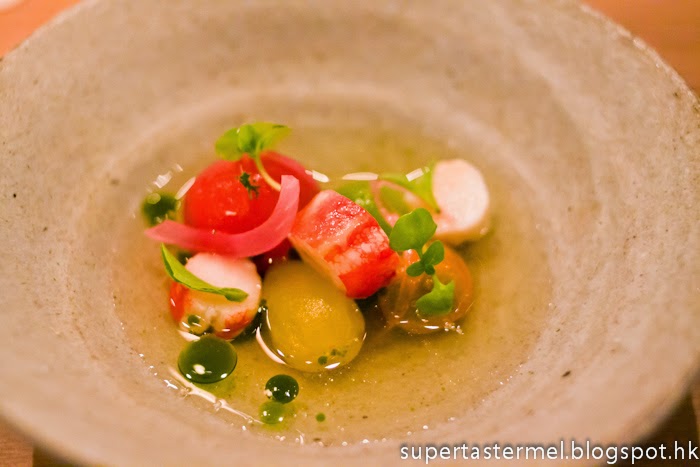 SALMON (5/5) - the salmon was out of this world! The cured Irish organic salmon was especially tender which made us feel like we were eating toro! The flavors were just remarkable while the accompanying beetroot and smoked buttermilk complimented the dish as well. 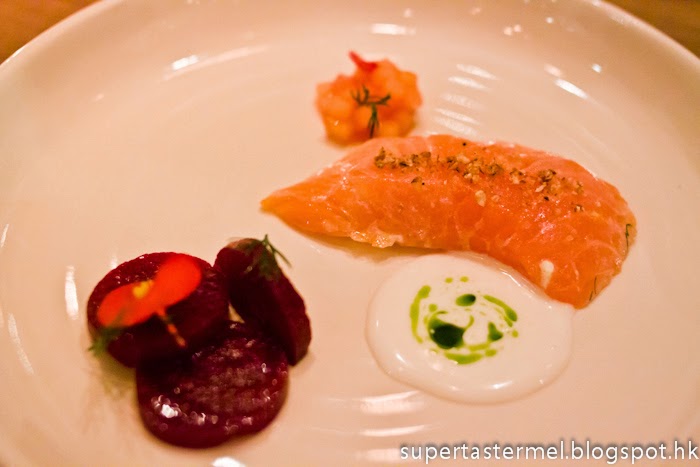 SALAD (4/5) - the salad was impressive with 24 kinds of Zen organic vegetables, garden herb butter, and aged Parmesan. It was a delight to look at - like a vegetable bouquet almost - while each vegetable had its own distinct taste. I especially liked the sprinkled Parmesan cheese which really brought out the flavors of the vegetables. 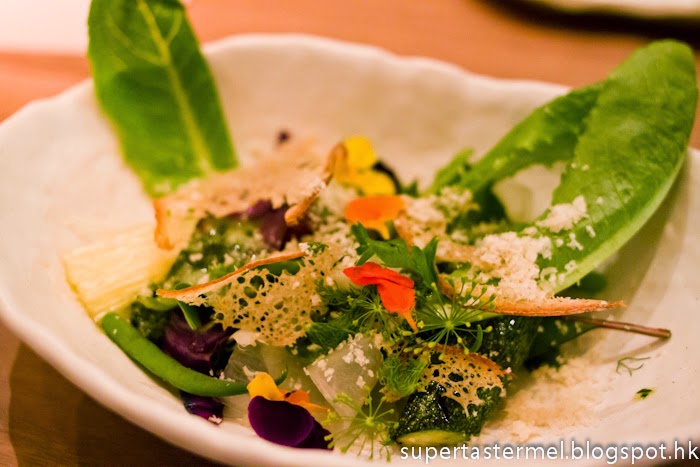 EGG (5/5) - the egg was a Taiyouran egg which is a type of Japanese free range egg where the chickens are reared on a special healthy diet of leaves. As I cut into the half-poached egg, the thick and rich orange yolk spilled out gently. The egg was deliciously sweet to eat which went exceedingly well with the mixed grains, quinoa, shiitake mushrooms and garlic chive sauce. 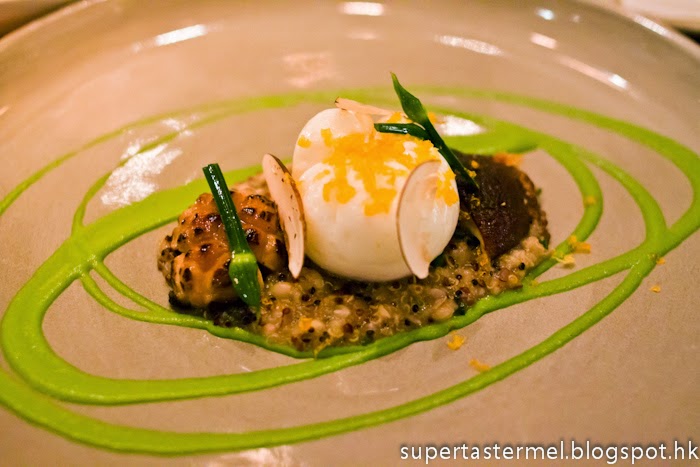 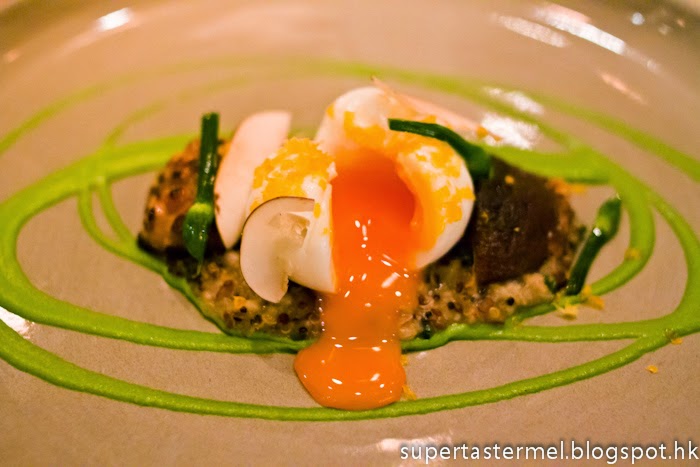 The course also came with house-baked rye sourdough bread and mushroom butter as well. It did seem strange to get bread in the middle of our dinner instead of at the beginning but we were told that we could eat the egg with the sourdough bread if we wanted to. The bread was actually really good - on par with the ones at Serge et le Phoque - while the mushroom butter smelled incredible. At one point, the aromatic smell wafted through the entire restaurant. 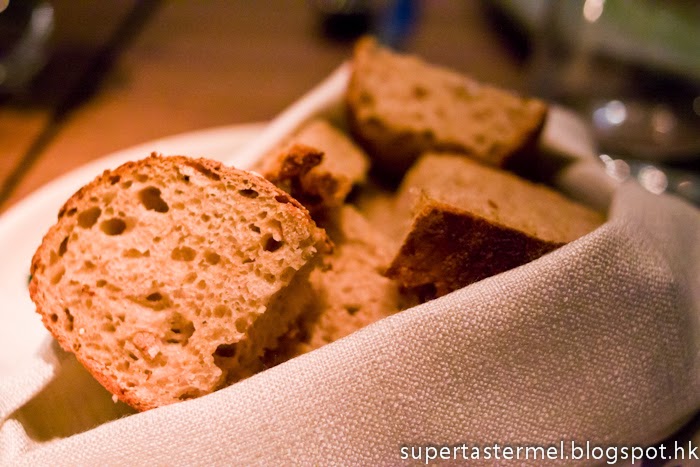 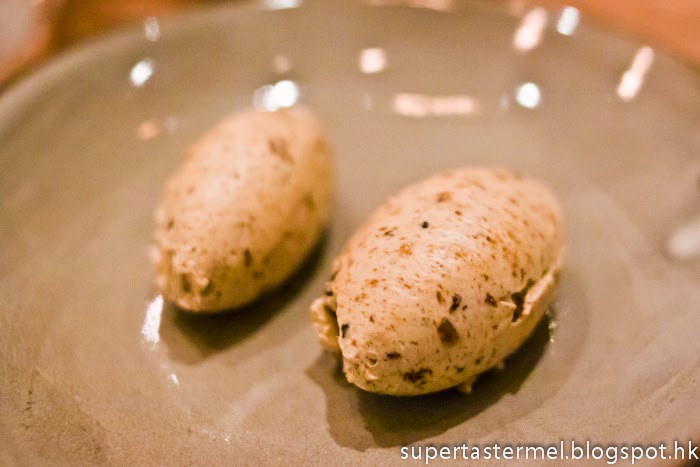 CHICKEN (4.5/5) - this was another astounding dish where the roasted chicken was surprisingly juicy and succulent to eat! A layer of crispy skin surrounded the red meat of the chicken while the white meat nestled in the center. The oyster emulsion was also rich and delicate, which I felt was an interesting pairing with the chicken. 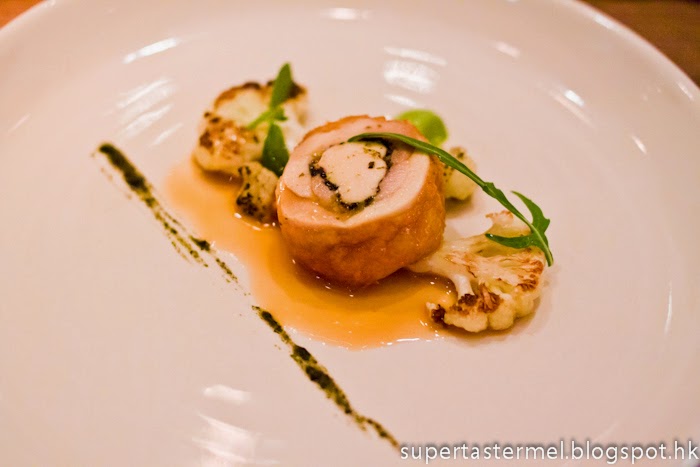 BEEF (5/5) - I love the strong contrasting colors of this dish which reminds me of a Chinese water painting! The smoked wagyu beef cheek was incredibly soft and tender while rich and flavorful. The wild bamboo roots and black garlic sauce balanced out the flavors in a wonderful way. 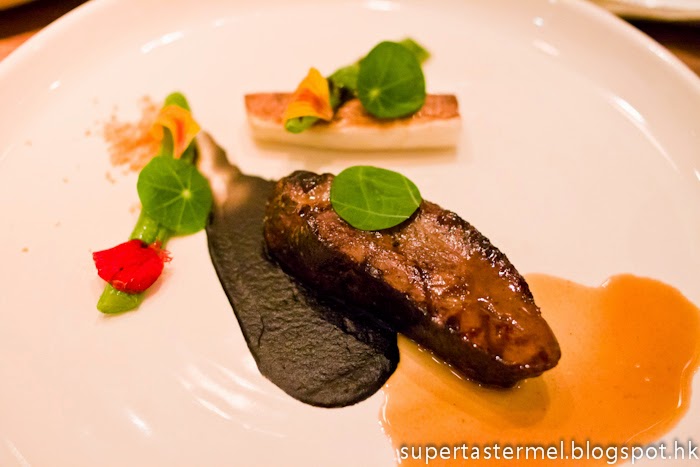 GUAVA (5/5) - the guava was delectable with its sweet and tart flavors while the coconut and lime sorbet was scrumptious! I love the bits of candy and the white chocolate film which enhanced the textures and flavors of the dessert as well. 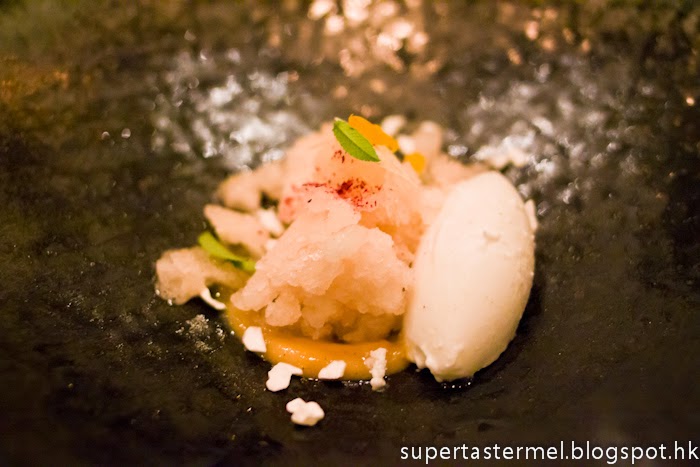 CHOCOLATE (4/5) - finally, we ended our night with the last dessert of our meal - a bitter chocolate ice cream with orange and hazelnut wafers. I liked how it was not too sweet with the use of bitter chocolate while the wafers were a nice touch as well. 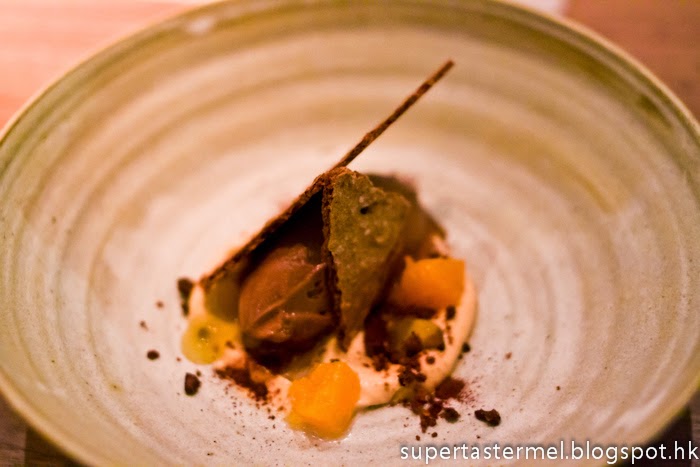 True to its motto, we were full from our meal but did not feel overly stuffed. Overall, the food at NUR was exceptional while the price was quite reasonable for the quality of the dishes! It was simply one of the best meals that I've had in Hong Kong yet as every single dish was impressive! While the dishes came out fairly quickly, it still took us about 2.5 hours to finish our 9-course meal. The service could use some improvement though - especially with the explanation of the dishes as it was hard to understand what the staff was saying sometimes. Otherwise, we were all excited to come back again! We did ask them if they will be changing the menu any time soon and they said while they won't be changing the menu, the chef is thinking about adding a new one. Time to start getting your reservations in!