Battle of the Burger - Burgeroom vs. Caliburger | Hong Kong

I visited both Burgeroom and Caliburger recently and tried their burgers for the first time. Read on to see who won this round of Battle of the Burger!

Burgeroom: Located on Caroline Hill Road in Causeway Bay, Burgeroom was rather small and cramped as the tables were placed in close proximity of each other. You could barely walk between the tables without bumping into others. I was sitting at the counter along the wall which arguably was more spacious given no one was sitting next to me. 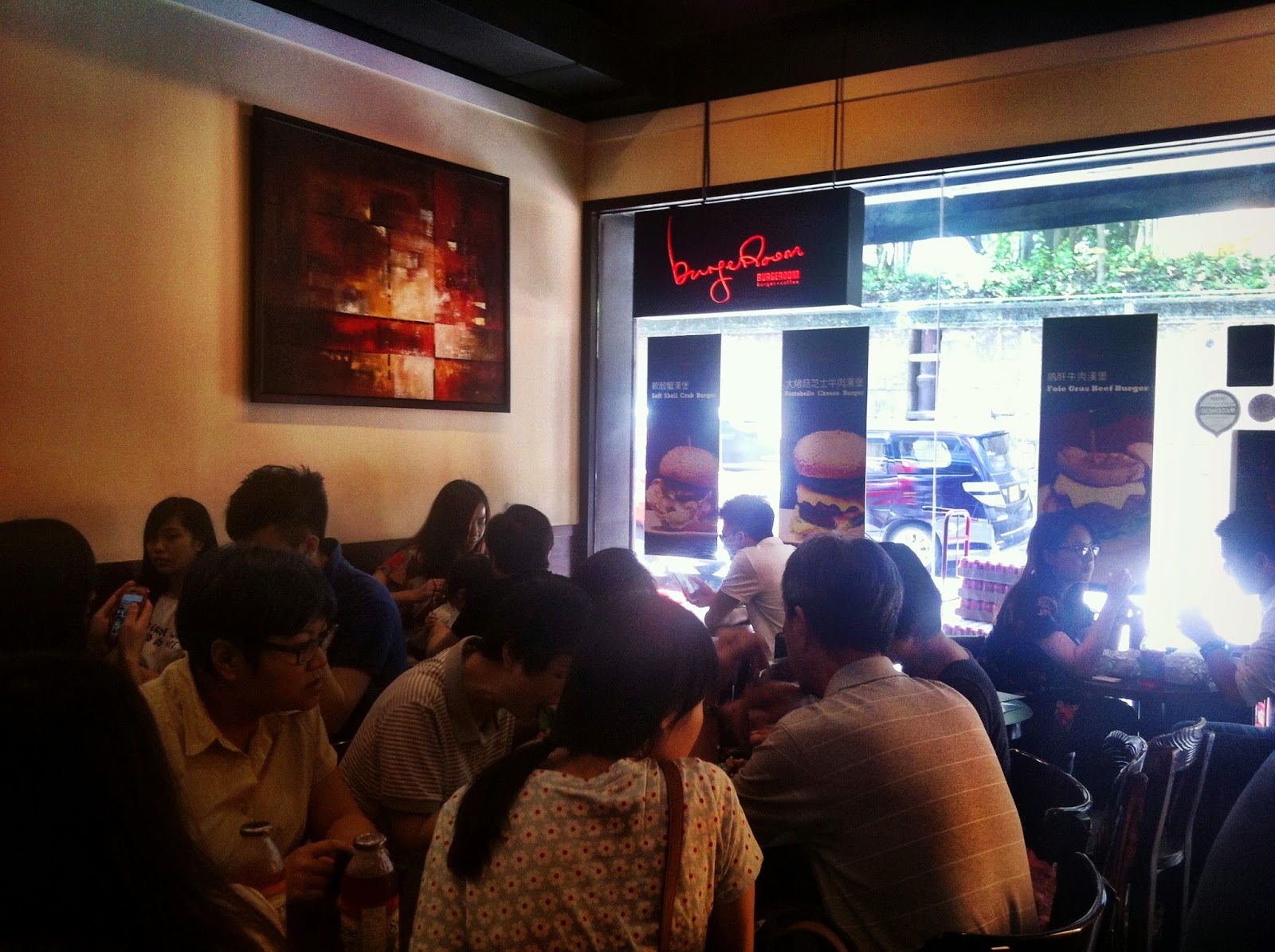 Caliburger: Caliburger is the In-N-Out imitator that has opened on Hennessy Road in Wan Chai. As I grew up in California, I was eager to find out if this local burger joint can match up to the US original. The fast food restaurant was bright and colorful with stereotypical SoCal decor like surfboards and posters of pretty people in beach wear. For a second, I thought I was in a Hollister store if not for the smell of burgers. The seating was definitely more spacious here compared to Burgeroom. 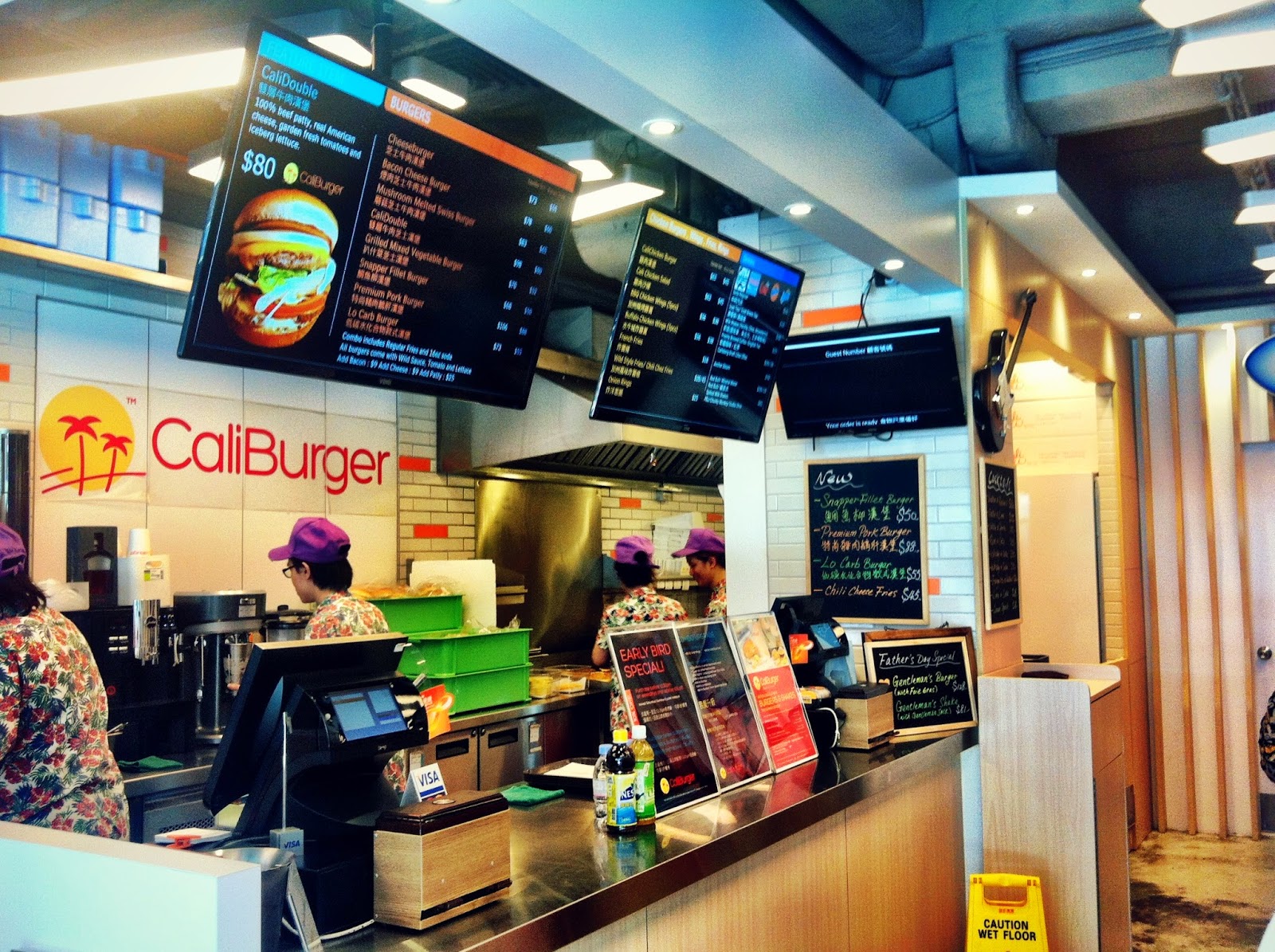 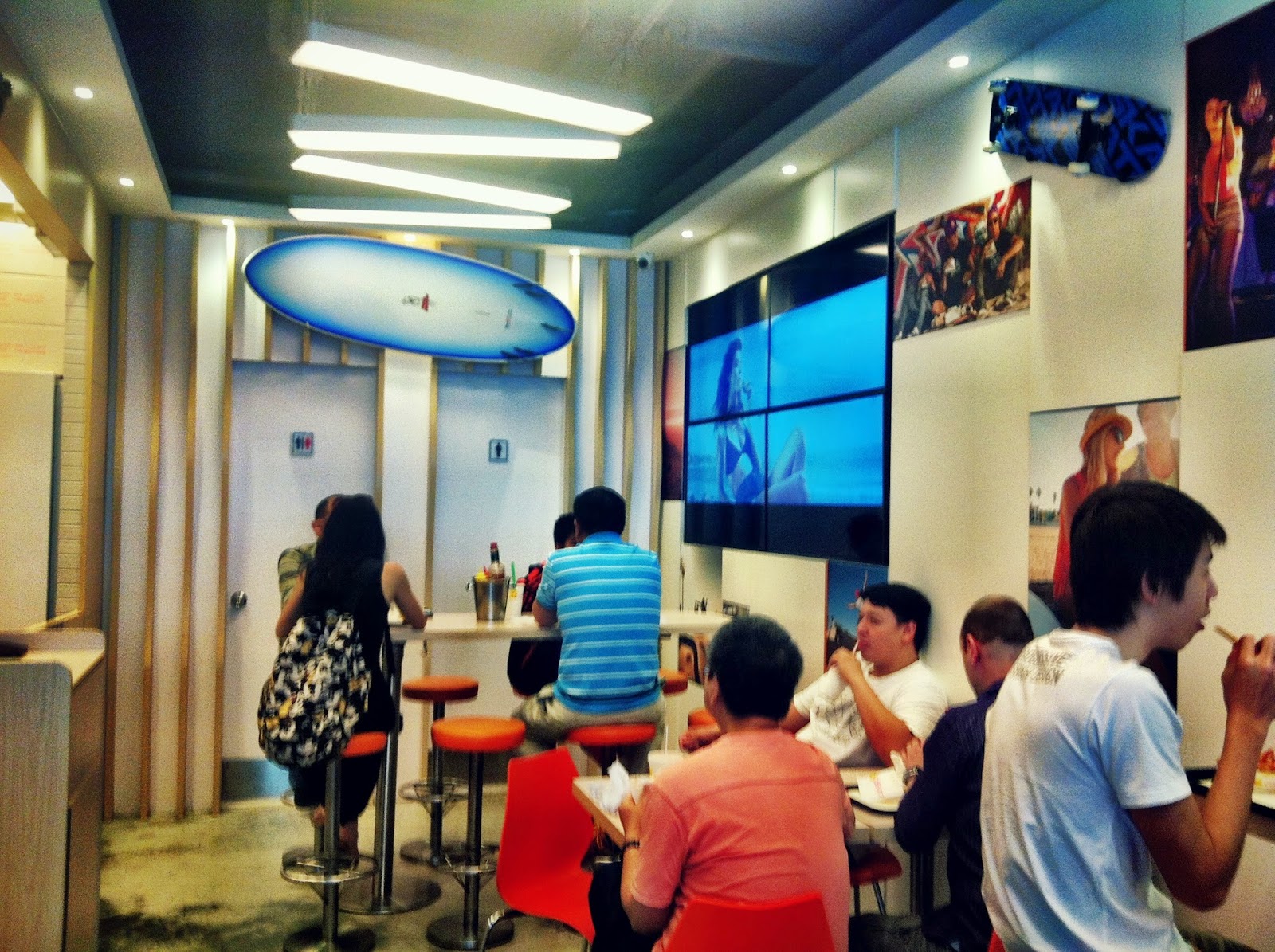 Burgeroom: For some reason, Burgeroom employs a half self-service model where you have to order at the counter but the burger is delivered to you at your seat. What's confusing was that they led me to a seat first and when I raised my hand to order, I was told to get up and order at the counter. Everyone who sat around me had the same reaction where we thought we could order from our seat given there were so many staff walking around. Which brings me to my next point - given the restaurant is so tiny, I don't get why they need 3-4 staff to deliver the burger to the tables instead of asking the customers to collect their food like a true self-service model. I think they should either streamline their service model to be entirely self-service or have the staff take orders like a real restaurant. They were polite enough though as they would open the doors for customers as they enter and leave.

Caliburger: Caliburger is entirely self-service like any fast food restaurant. No confusion there. You can see where they make their burgers on the spot in an open area right next to the cashier. The only thing I didn't get was the hideous color-clashing-psychedelic uniforms the staff was wearing. 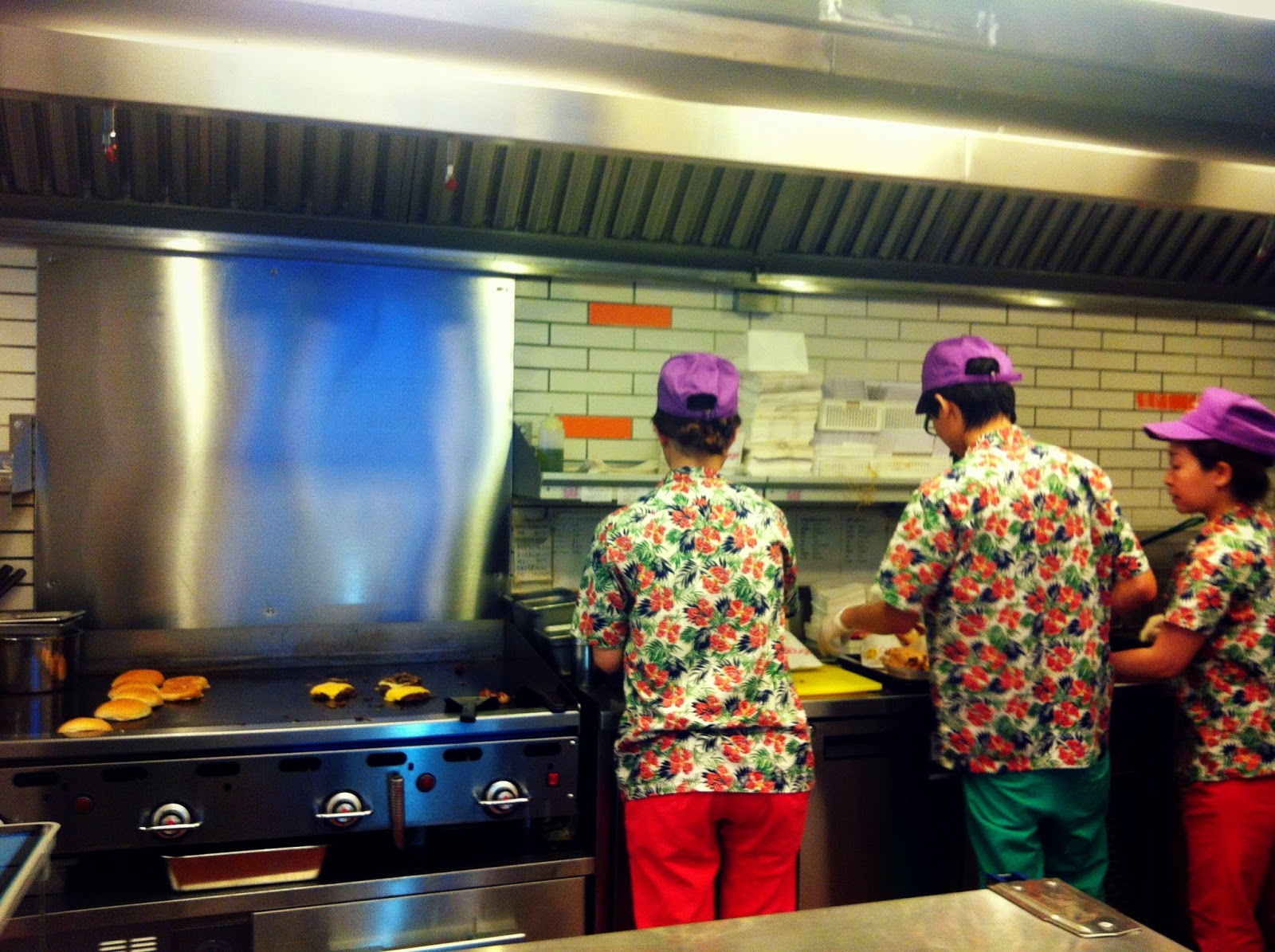 Burgeroom: The burger menu was creative and extensive at Burgeroom with signature gourmet choices like Foie Gras and Soft Shell Crab burgers. Prices range from $65 to $200+ for the burger alone with the option to add on fries and drinks for $22 during lunch. I decided to order the Bacon Cheese Burger ($80) - something more classic so I can taste the real flavors of their beef patty. 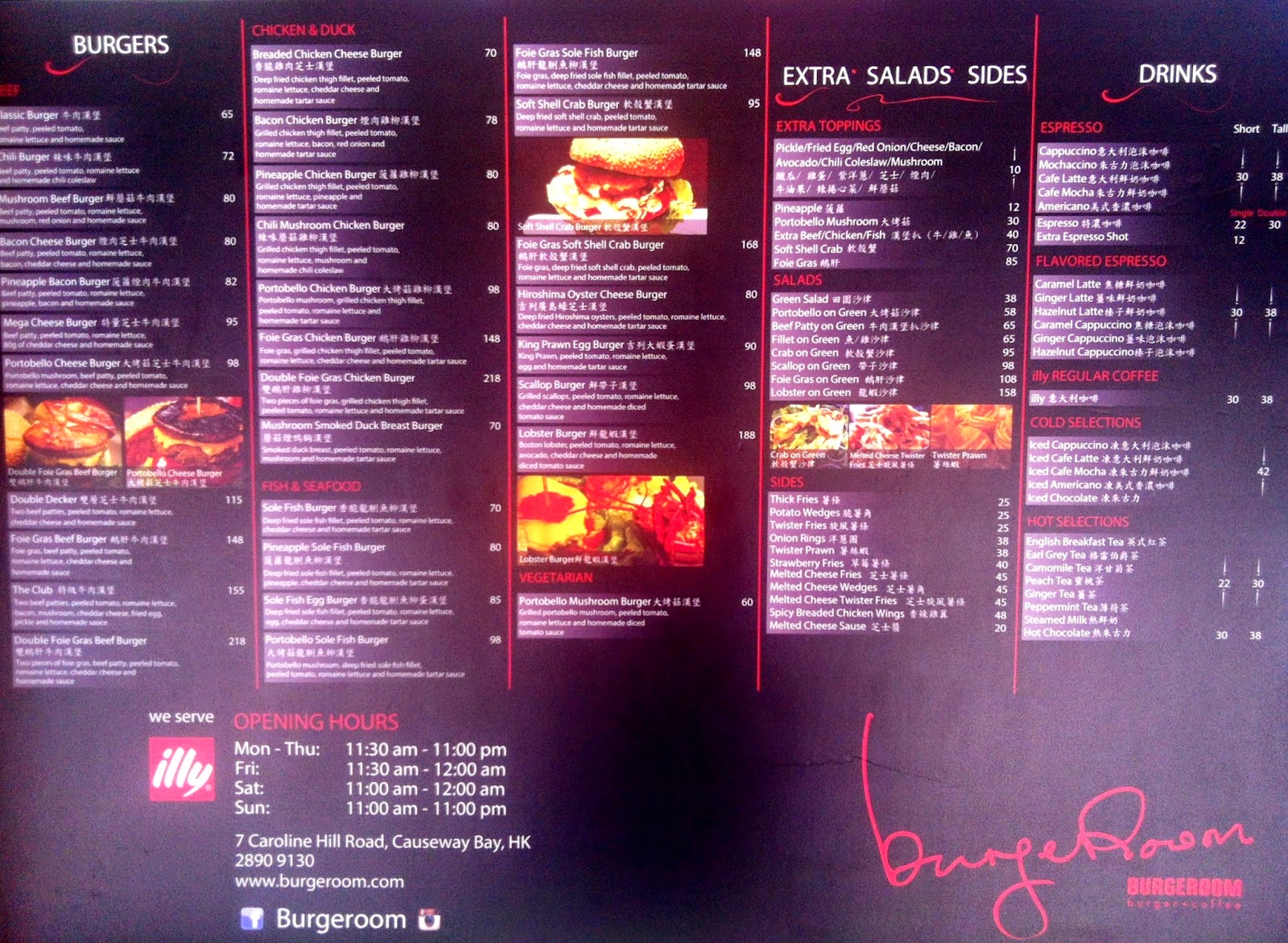 Caliburger: The menu at Caliburger was more concise with lower prices - burgers here range from $55 to $88 plus an additional $18 for a combo. Also notable is that they have spiked milkshakes! I also got the Bacon Cheese Burger ($60) here and with the Early Bird Special discount (20% off if you order before 1PM on weekends), my meal here was much cheaper compared to Burgeroom. 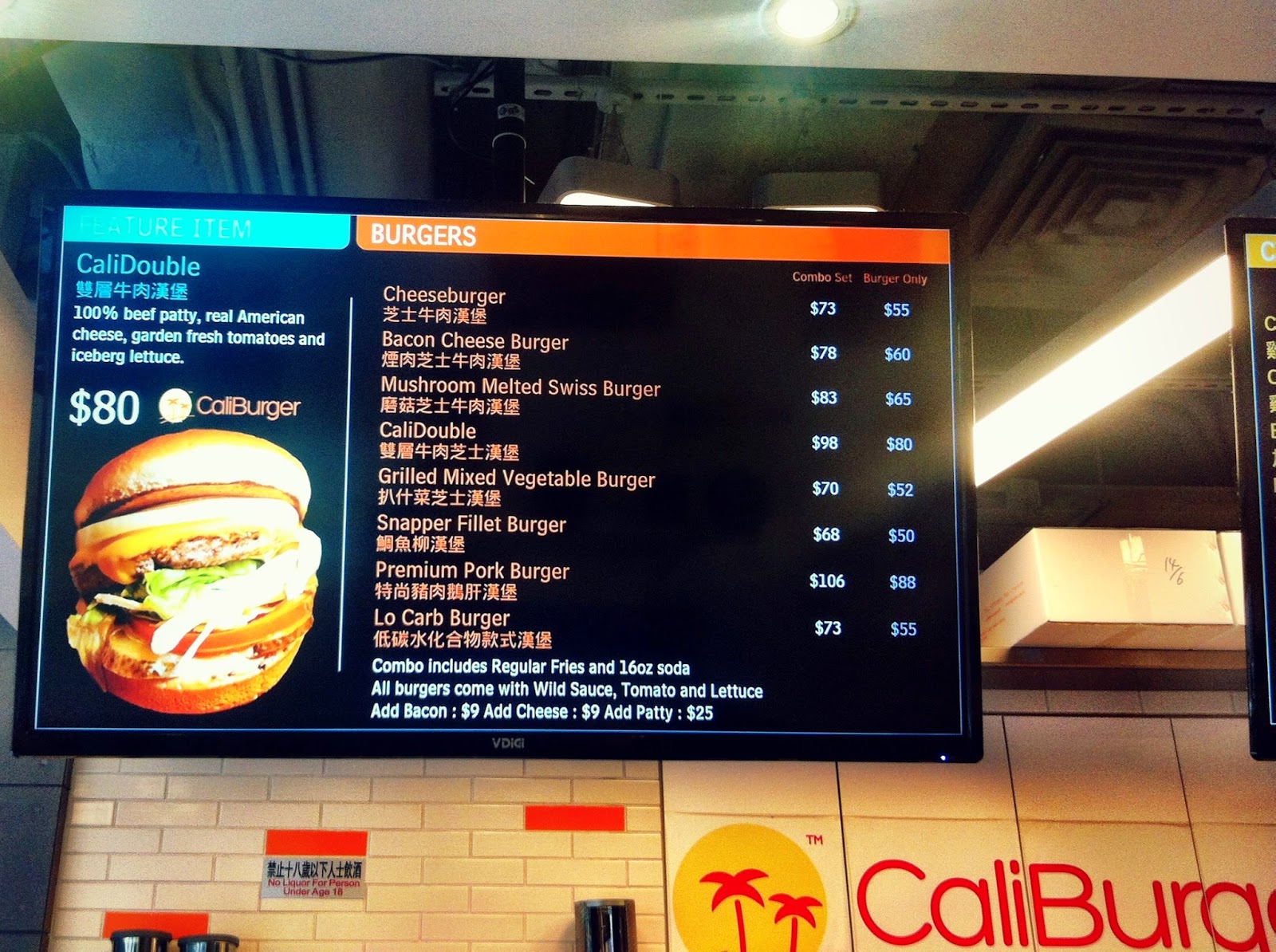 Burgeroom:  The Bacon Cheese Burger arrived already cut in half, which was appreciated given the huge size of the burger. The burger was fantastic as the beef patty was thick and juicy with chewy bits of tendon here and there while the bacon was caramelized so it was slightly sweet. The buns were also nicely toasted with adequate structure and texture. My only qualm was that the food arrived in a tiny little tray with no space for me to squirt ketchup for my fries. 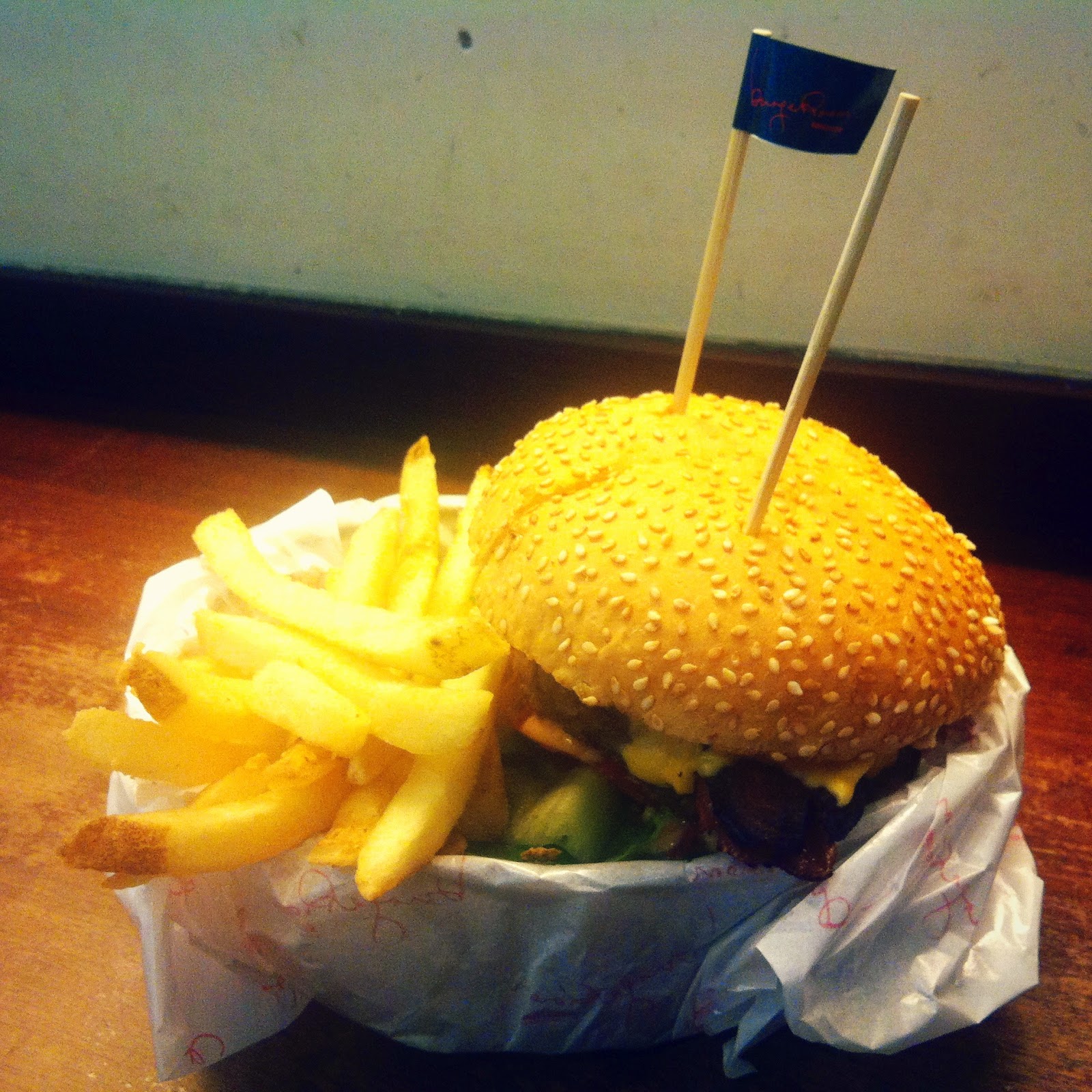 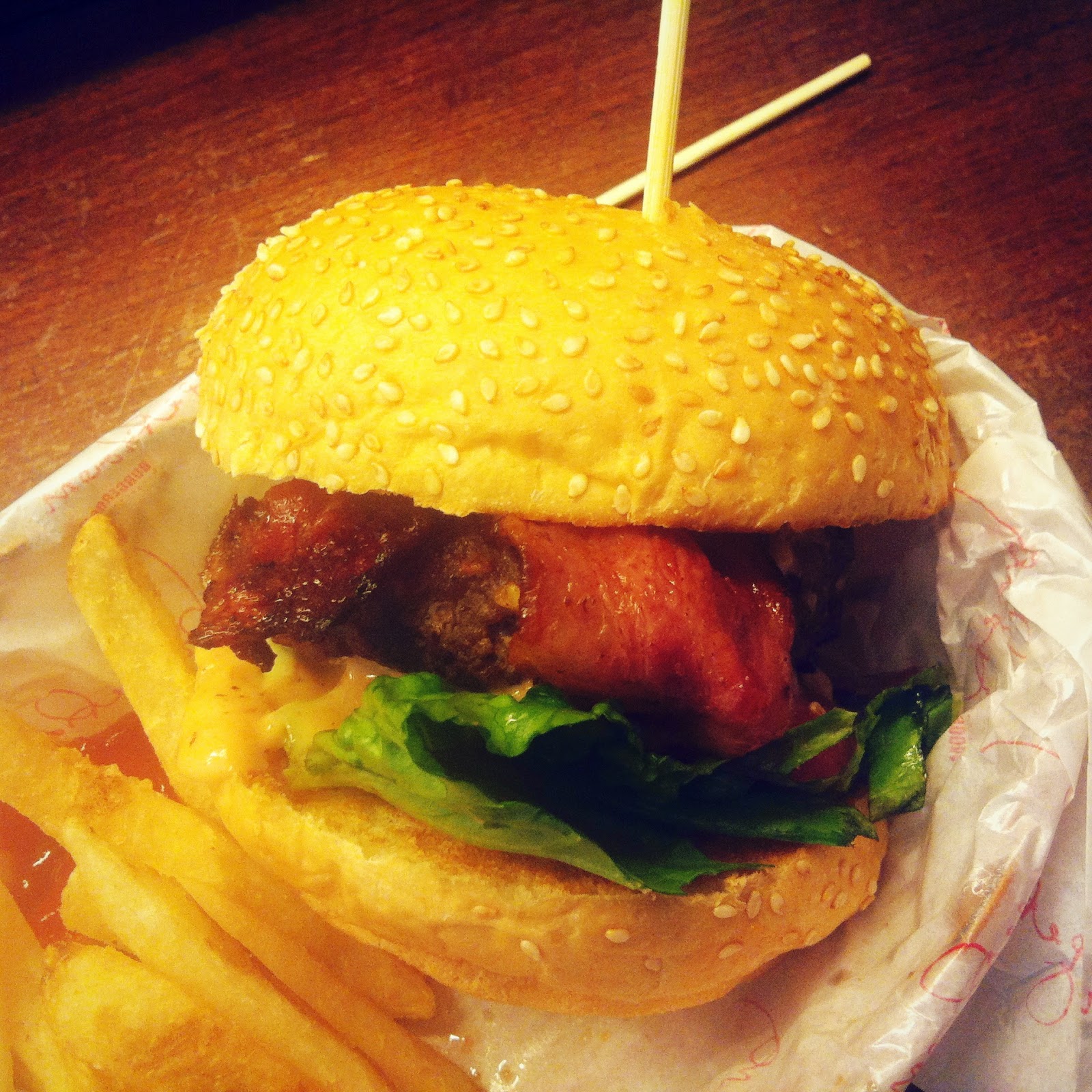 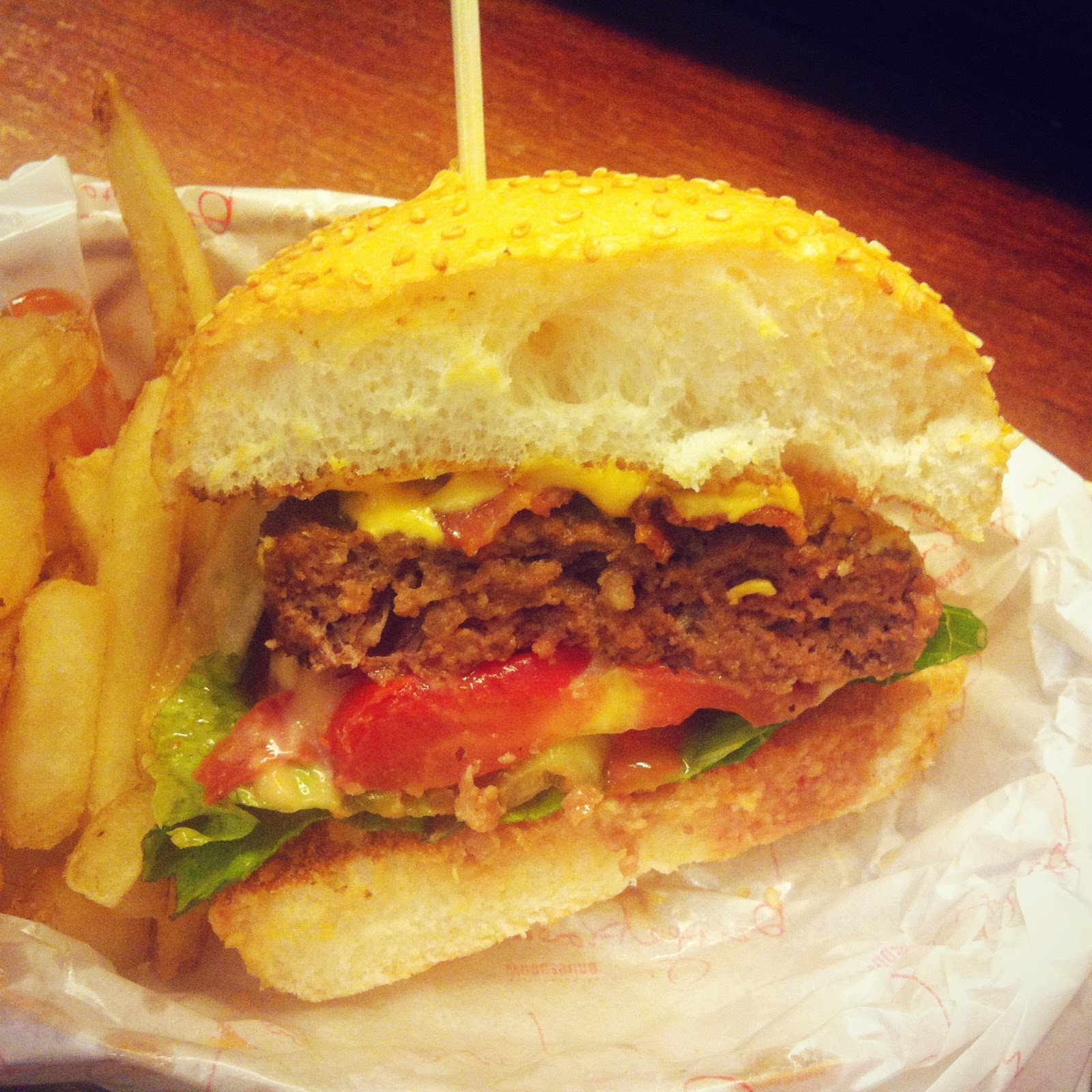 Caliburger: The burgers at Caliburger were much smaller and well, rather sad-looking compared to the ones at Burgeroom. The buns were limp and stale while the patty had no seasoning at all. The bacon was too salty as it wasn't caramelized.. Even with the Wild Sauce, the Bacon Cheese Burger at Caliburger was pretty bland to eat overall. We had upgraded our fries to Onion Rings and even that was disappointing as the batter was way too thick. 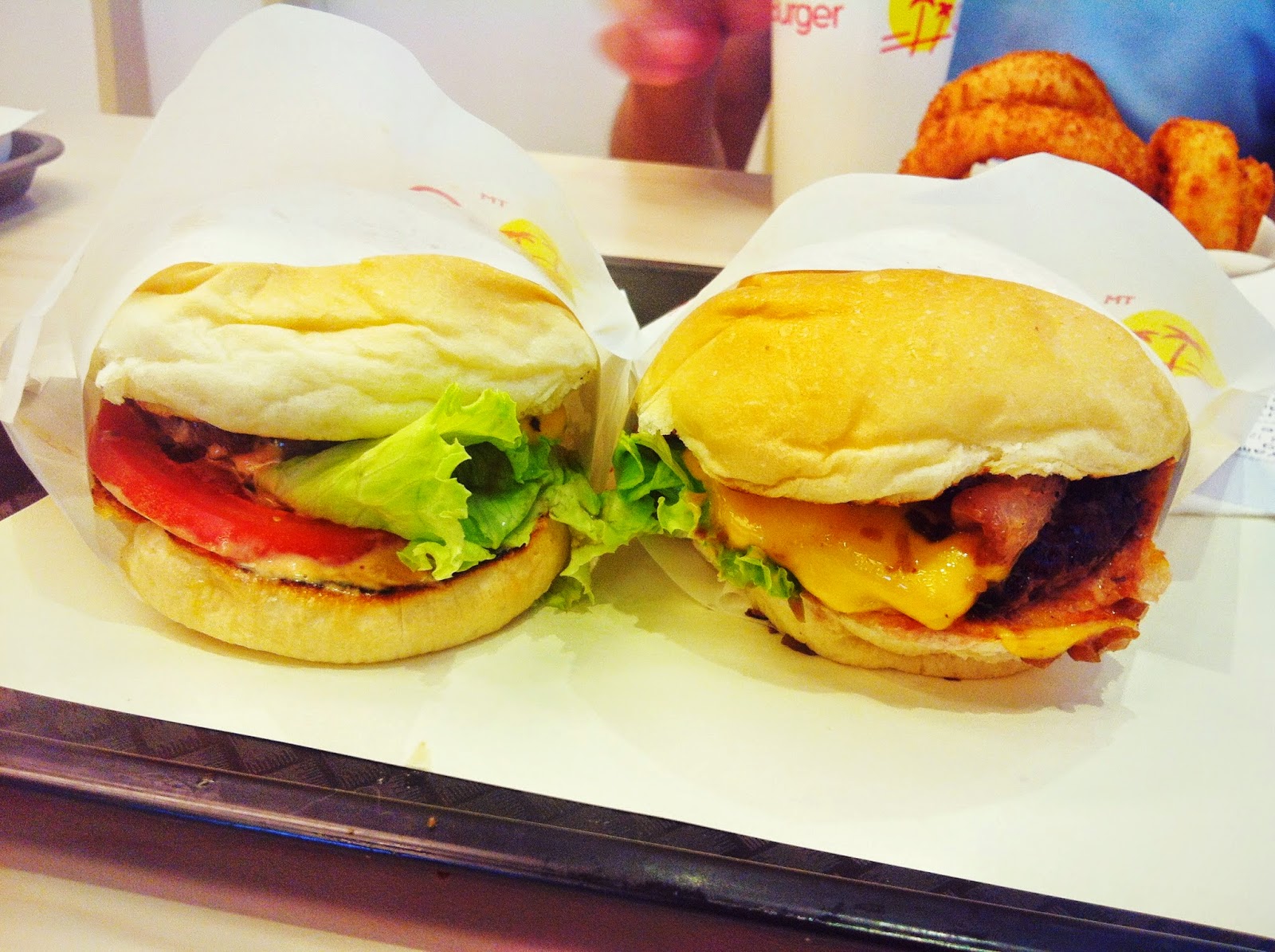 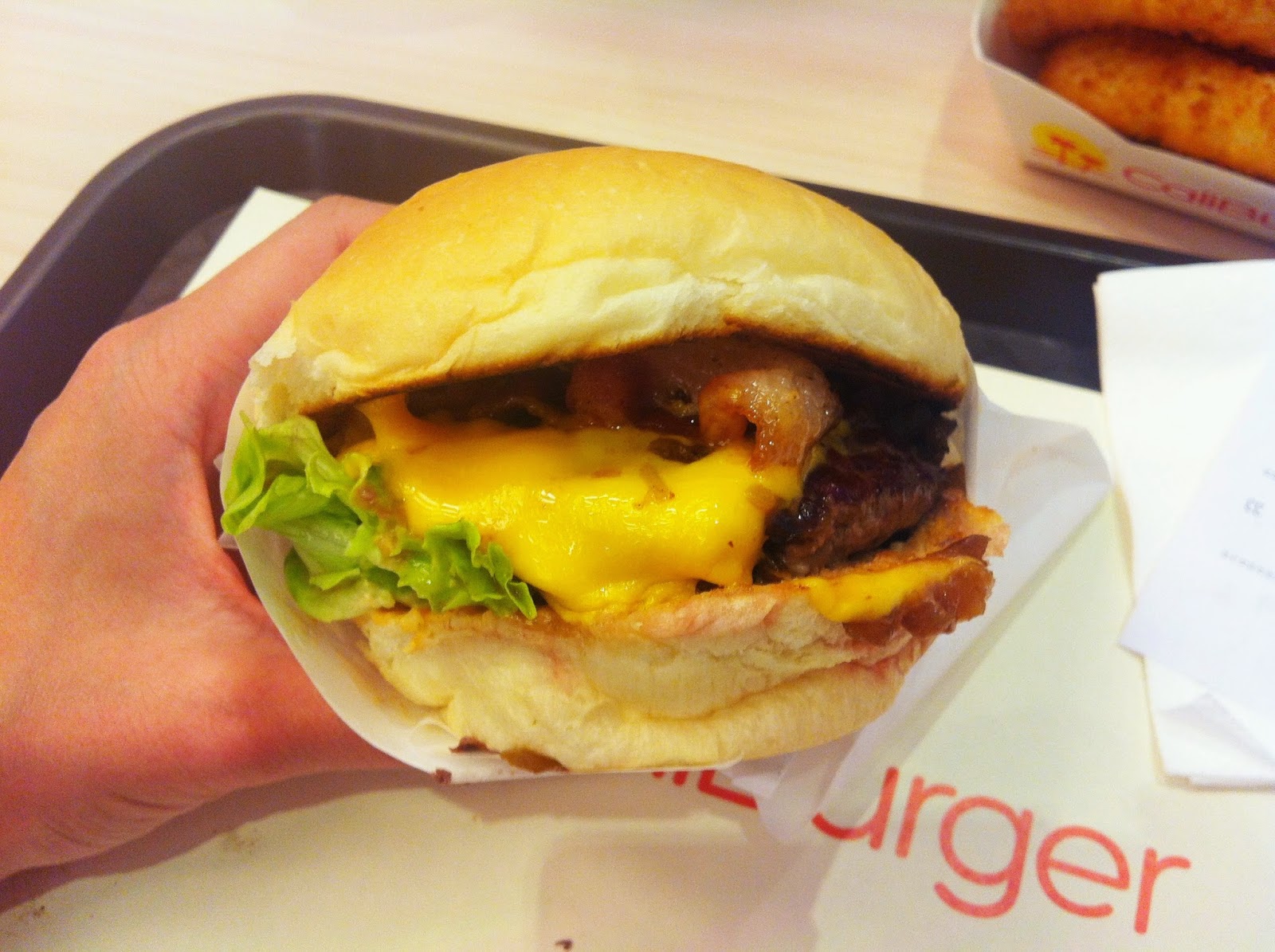 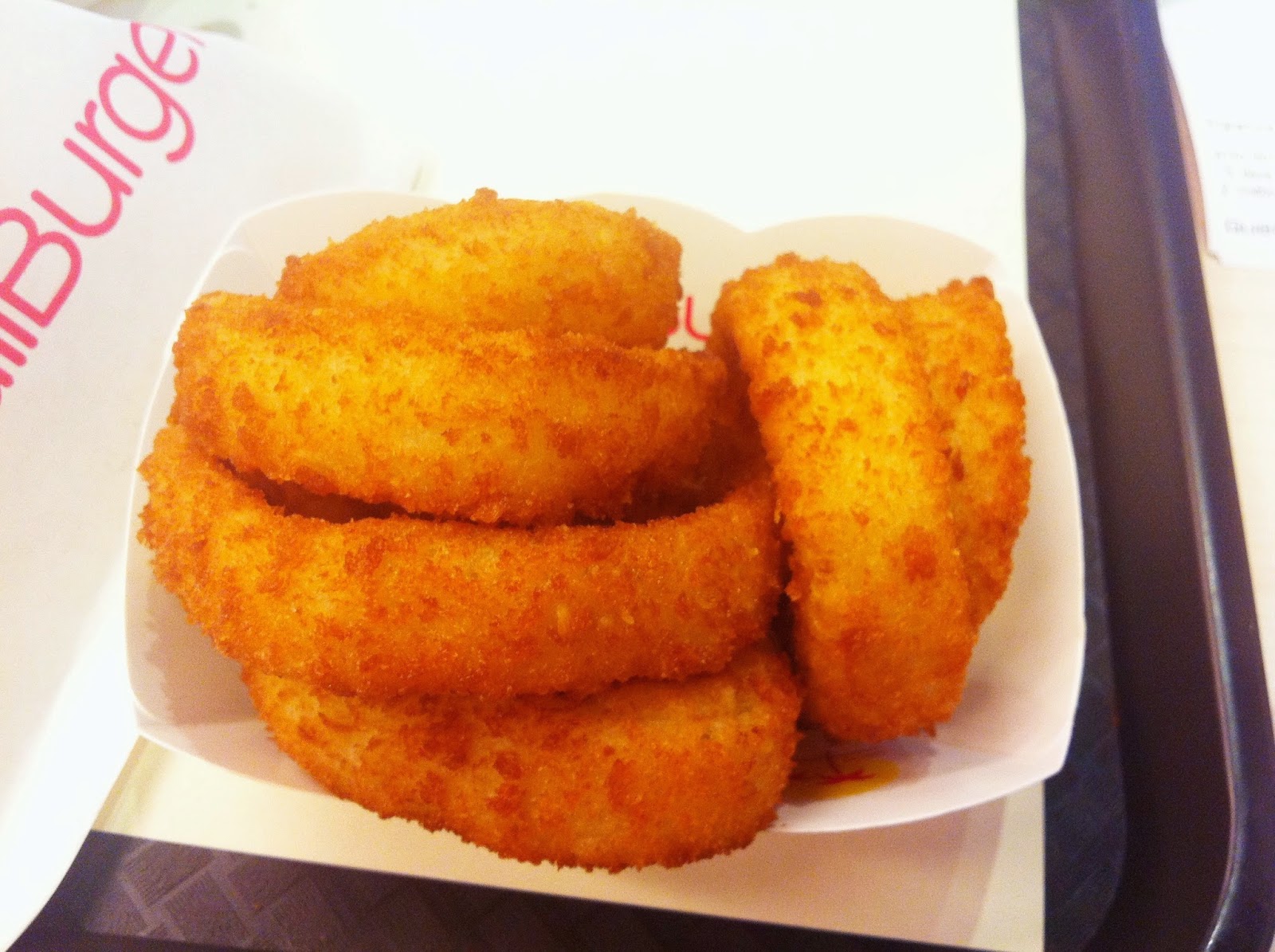 Verdict - Burgeroom wins this round against Caliburger for me as their burger was much better in terms of quality and taste! I'm impressed and I can't wait to go back and try their more gourmet burgers. As for Caliburger, they've got nothing on In-N-Out at all!