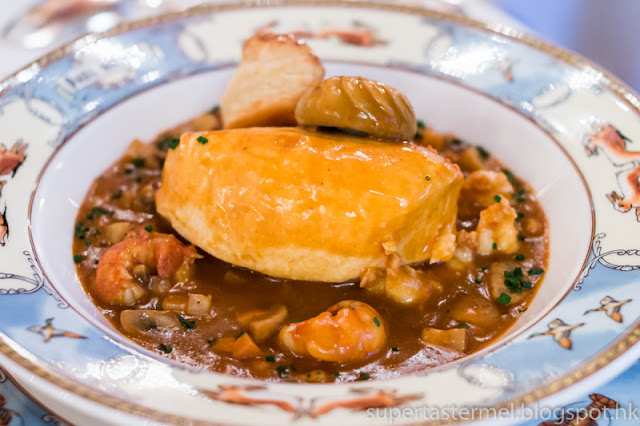 The reason we stopped by Lyon on the last leg of our Europe trip was because we were always told that it is the food capital of France and what better place to try traditional Lyonnaise cuisine at its best than at the 3* L'Auberge du Pont de Collonges by Paul Bocuse - a legendary figure and culinary god in Lyon! Bocuse is now 89 years old and he's considered to have made prominent contributions to French gastronomy while receiving numerous awards for his culinary achievements. His flagship restaurant on the banks of Saone has held the coveted 3 Michelin stars since 1965 and serves a traditional menu that hasn't changed in decades so while you may not find the most innovative dishes here, you will be able to experience and appreciate the techniques that made this a 3* to begin with!

The menu comprised of a la carte dishes and 3 tasting menus with the 4 course Classique for 165€, 6 course Bourgeois for 220€ and 8 course Grande Tradition for 255€. It was not our first meal in Lyon and knowing how rich and heavy Lyonnaise food can be, we both opted for the Classique menu for our dinner. 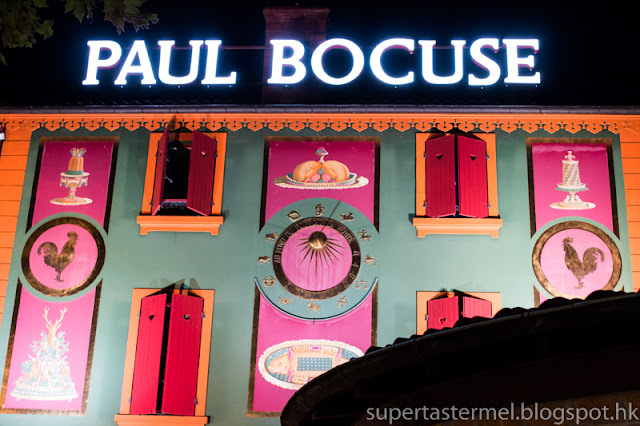 When we sat down at our table, we noticed that all of the plates and cutlery had either Paul Bocuse's name or initials on it which was very interesting. We started off with some bread and butter and unlike most fine dining restaurants which will offer a variety of bread basket, the only choice here is a classic French baguette which was very crispy on outside yet fluffy soft on the inside. 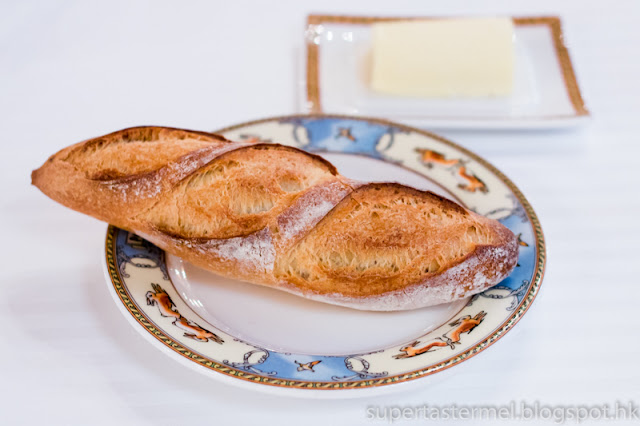 Our amuse bouche was a Cold Tomato Cream with Parmesan Cheese which I adored since I love tomato soup. Making it into a cold version was very refreshing in the summer time especially with the heat wave that was hitting Lyon when I was there. 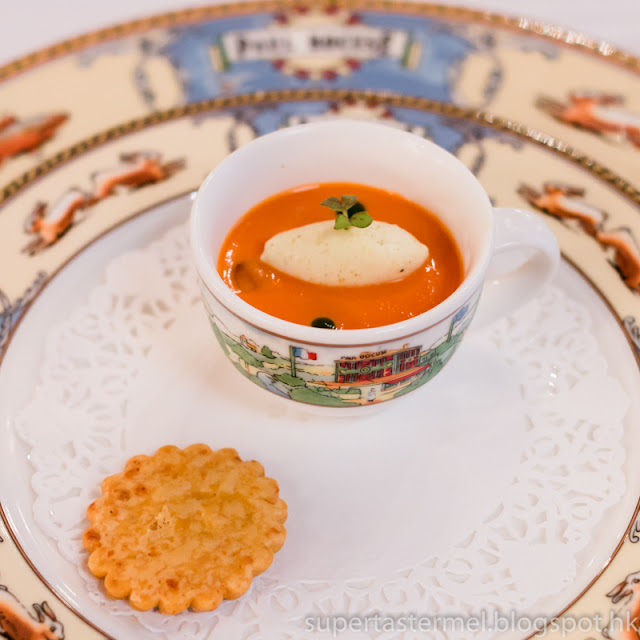 We decided to add an extra starter on top of our tasting menu because we wanted to try the Burgundy Snails with Traditional Herb Butter (45€) since escargot is one of the best known French dish and our tour guide in Barcelona told us that the biggest snail that she has ever eaten was in Lyon! Burgundy snails are the most prized out of all varieties as they are bigger, plumper and sweeter than most, and usually served in the France's finest restaurants. I couldn't really tell how big the snails would have been given they were served in a ceramic shell, but they were bigger than what I have tried in the past while the herb butter was solid but not spectacular. 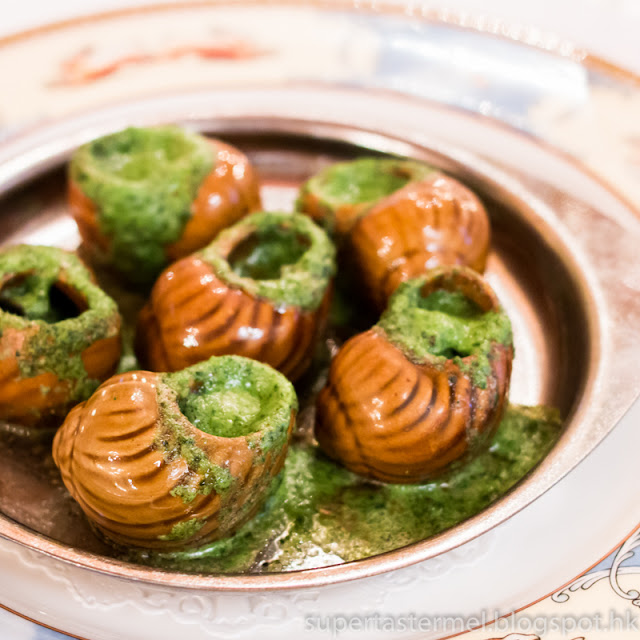 The Traditional Lyon Quenelle of Pike with Crayfish and Nantua Sauce is a must-try since Lyon is most famous for quenelle which is a mixture of creamed fish with a light egg binding and poached in slightly salted water. The result is a delicate mousse texture with a subtle taste of fish that is uniquely Lyonnaise as there is no close equivalent of this dish in other countries (not even other cities in France)! The rich and flavorful sauce was also what elevated this dish heads and shoulders from others we've tried in the city.

The Frog Soup with Cresson was thick and creamy with an abundant amount of tender frog meat. It was delicious to drink with its velvety texture but I found the flavors to be rather singular. 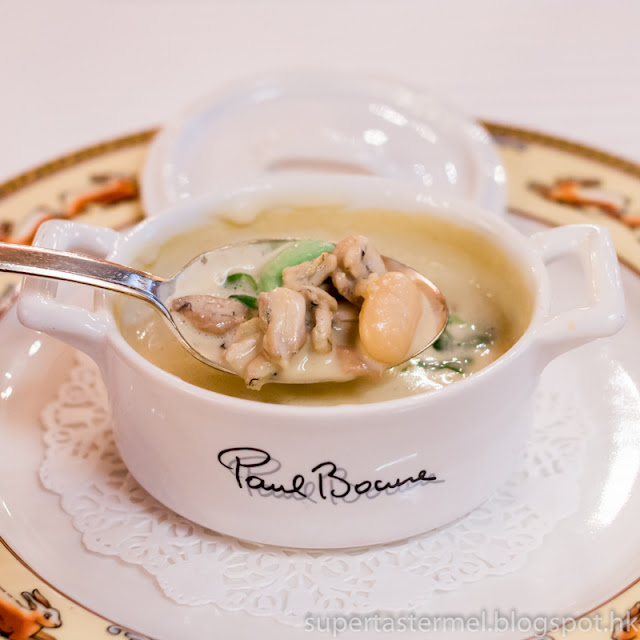 Our main dish was this impressive classic Sea Bass Stuffed in Puff Pastry Shell with Choron Sauce whose intricacy and execution demonstrated why this is a 3* restaurant. The beautiful creation was paraded around our table before the waiter expertly dissected the dish - removing first the layer of puff pastry, dividing the sea bass and lobster mousse into two portions, placing a section of the puff pastry back on top of the fish and finally drizzling the sauce onto the serving plate. Everything was cooked to perfection from the crispy puff pastry to the flaky sea bass to the silky smooth lobster mousse. The portions were quite big and I was stuffed midway through but it would be a sin to let this deliciousness go to waste. 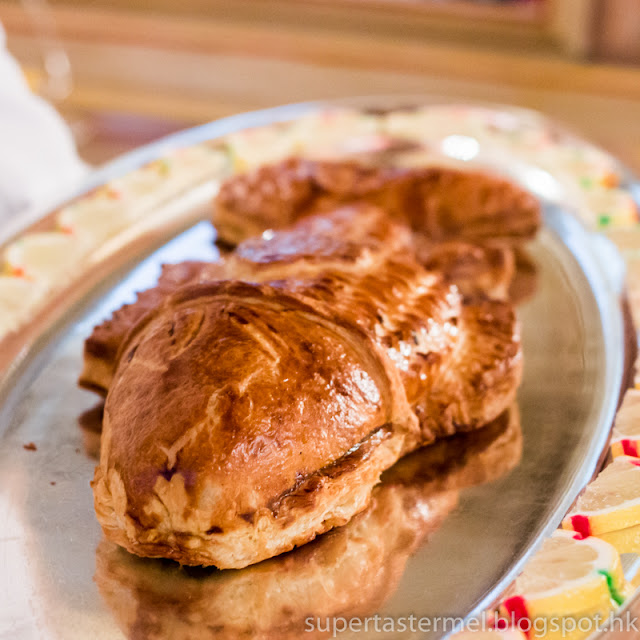 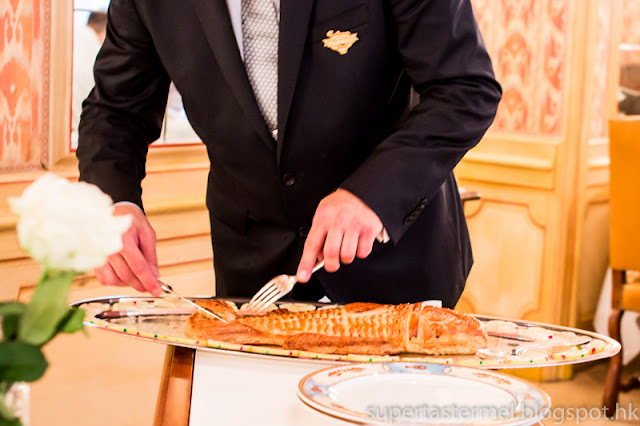 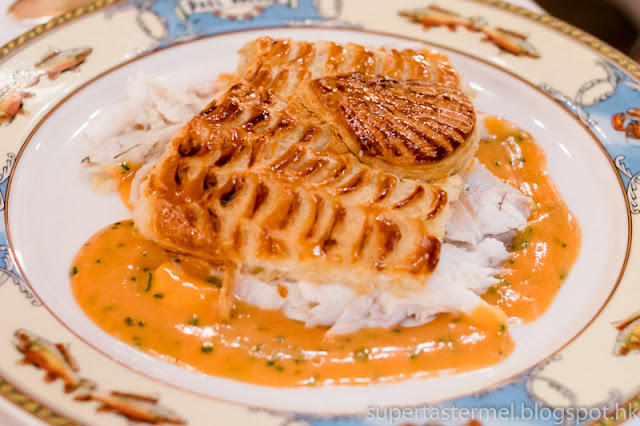 The Selection of fresh and matured cheese from 'La Mere Richard' is where cheese lovers died and went to heaven. Honestly, this was the largest selection of cheese I've seen in a restaurant and you can choose as many as your heart desires. 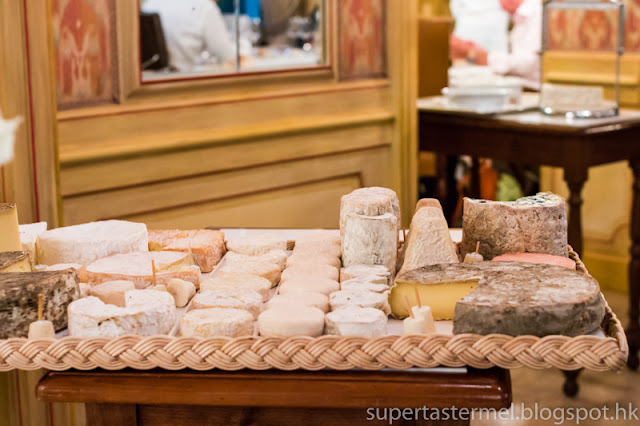 The petit fours came first and I thought this was the main dessert with chocolate mousse, chocolates and delicacies which I should have guessed from the cheese selection that it would not be this simple. 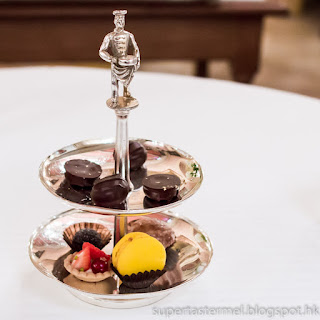 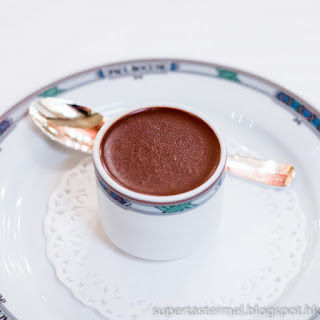 Because the desserts would turn out to be a full fanfare with 4 to 5 tables of different desserts for us to choose from like:
Traditional baba au rum • Floating Island as Grandmother Bocuse made it • Seasonal fruit tarts • Fresh fruit salad • Sirio Creme Brulee • Beaujolais fruit cup • 'President' chocolate cake by Maurice Bernachon • Ice cream and sorbets • Assorted Cakes 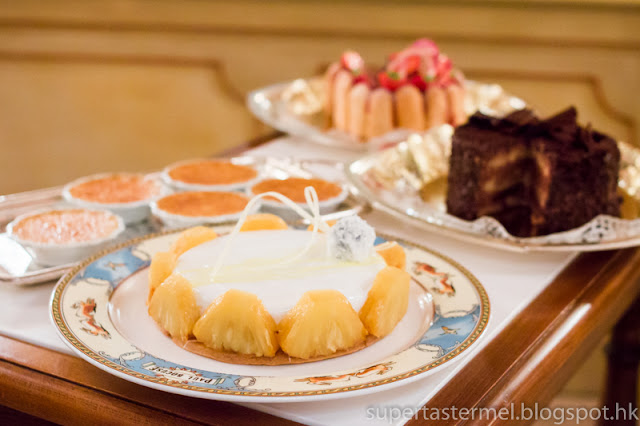 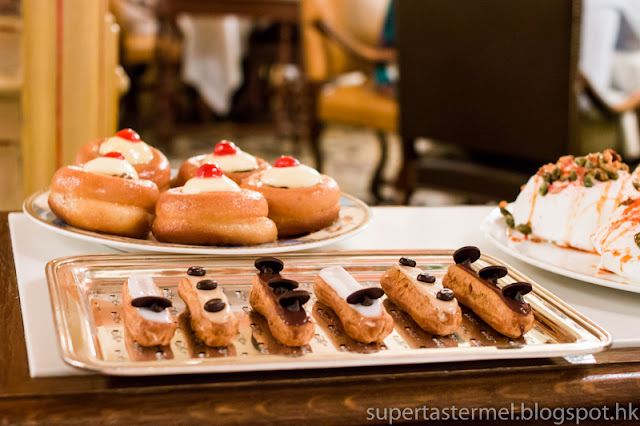 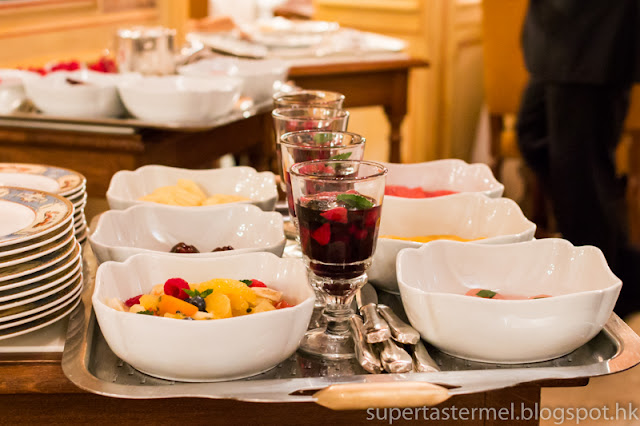 One of the desserts I chose was the raspberry sorbet which was gorgeously plated on the spot. 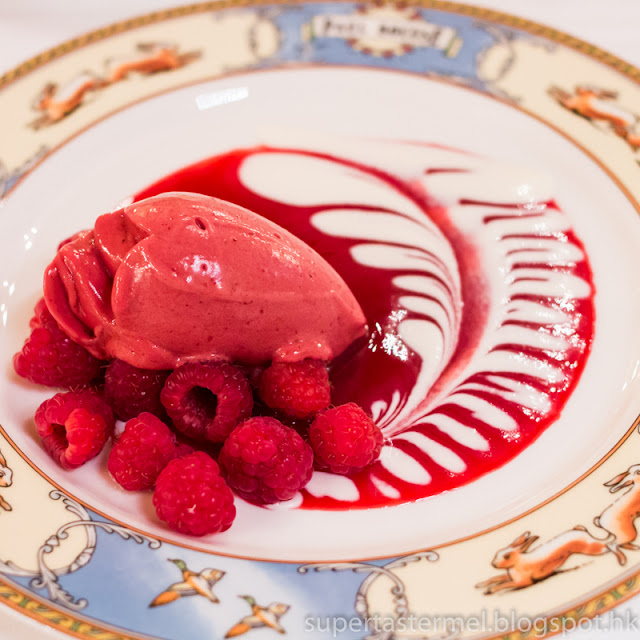 Verdict - by the end of the meal, I was stuffed beyond belief and while the food is excellent and a great way to get a taste of traditional and classical French cooking, I'm not sure that I would go back again. Personally I'd prefer more modern and finer cuisine that wouldn't leave me feeling so stuffed after a meal. The service was impeccable though with many well-trained waiters that did not hesitate to make sure everything served on the table was delivered at the utmost professional level. In the end, I was glad that I went and I think everyone who loves French cuisine should experience this restaurant at least once in their lifetime.