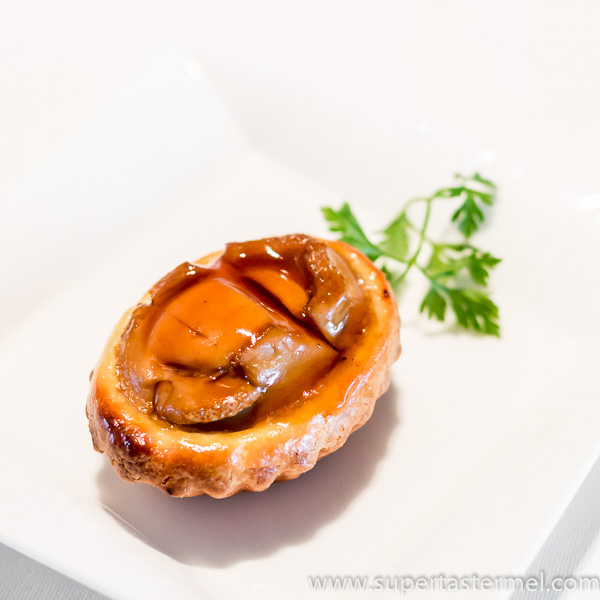 It took me about a month to get a lunch reservation at Lung King Heen - the first Chinese restaurant to be awarded 3 Michelin stars in the world! When I called to make a reservation, I was told that the first availability for weekend lunch would be 3 months later and the wait would be even longer for window seats, so we decided to do weekday lunch instead. Located on the 4/F at the Four Seasons Hotel, the restaurant boasts expansive views of the Victoria Harbor with spectacular food to match. The weekday lunch menu had limited dim sum to choose from compared to the weekend, so we ended up getting the Executive Lunch set for $560 per person instead so we can try a bit of everything. 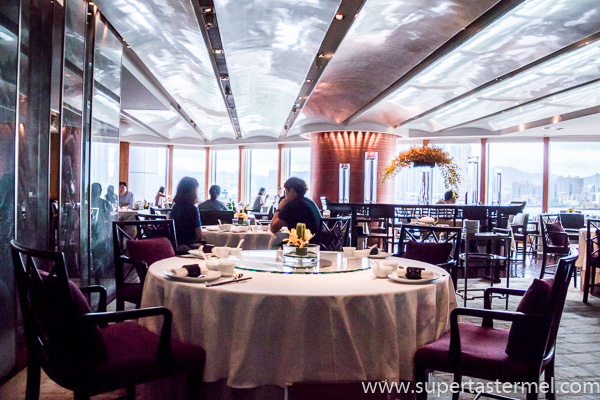 We didn't think much of the condiments at first until we tried the sauce in the middle which tasted like an XO sauce but without any of the usual seafood ingredients. When we inquired with one of the staff, he told us that the chef had created a vegetarian version of the spicy seafood sauce to accommodate diners who wanted a more healthy option. 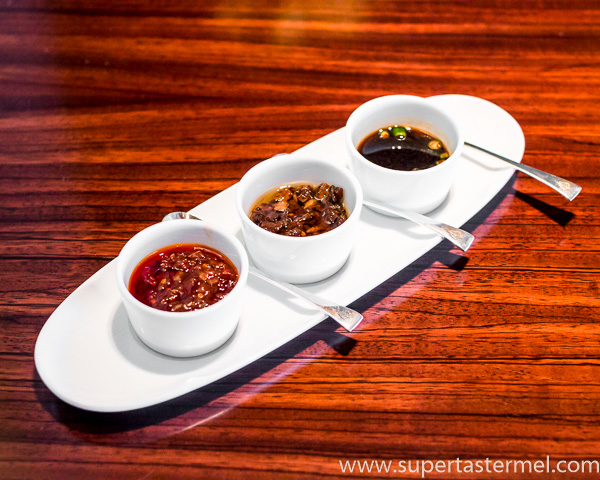 The Executive Lunch came with 3 Chef's Dim Sum Selection which included the Steamed Shrimp Dumplings with Wild Mushrooms and Steamed Assorted Mushroom Dumplings with Lettuce. The shrimp dumpling lacked the strong fresh prawn flavor that is usually present in har gow but it was still flavorful while the dumpling skin was nice and thin. I liked the mushroom dumpling more as it had a myriad of different vegetables that seemed to have been sauteed which brought out the flavors. 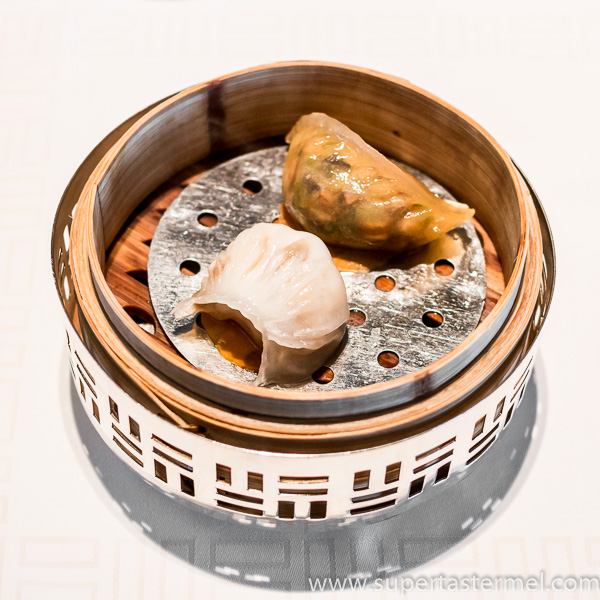 The last of the dim sum trio was this cute Baked Barbecued Pork Pineapple Bun with Pine Nuts. The pineapple bun crust was perfectly crispy while I loved the addition of pine nuts in the barbecue pork filling. 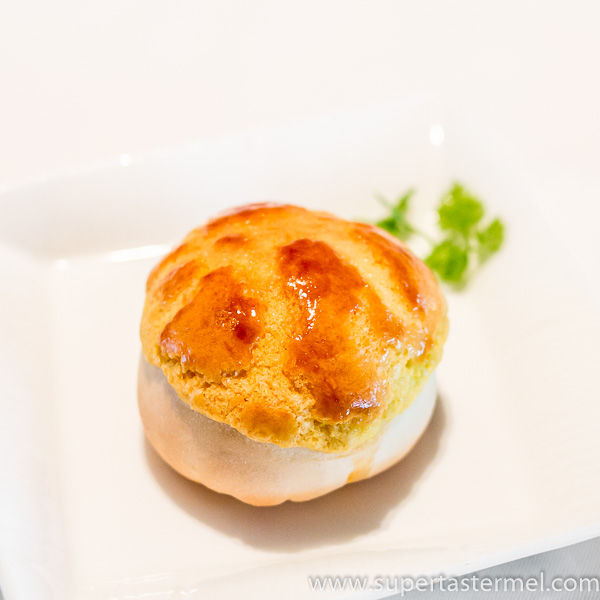 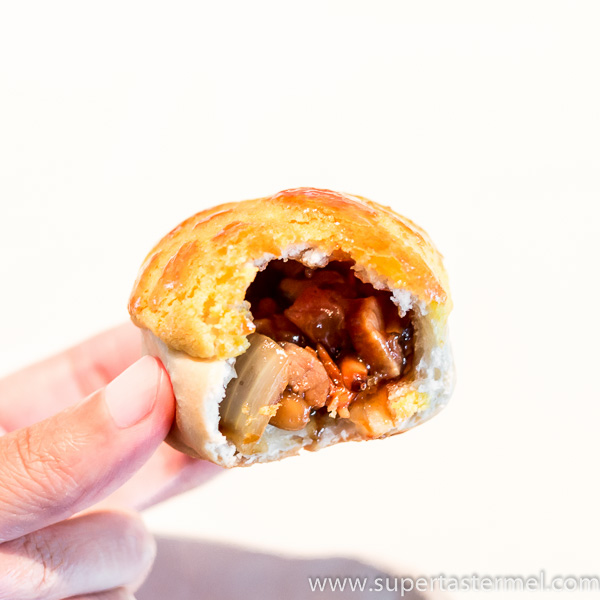 We ordered the signature Baked Whole Abalone Puff with Diced Chicken ($68) on the side and the puff pastry was finely made as it was super flaky and crunchy with many thin layers.

We continued our lunch set with the Soup of the Day with pork and corn which was soothing to drink with light and sweet flavors. 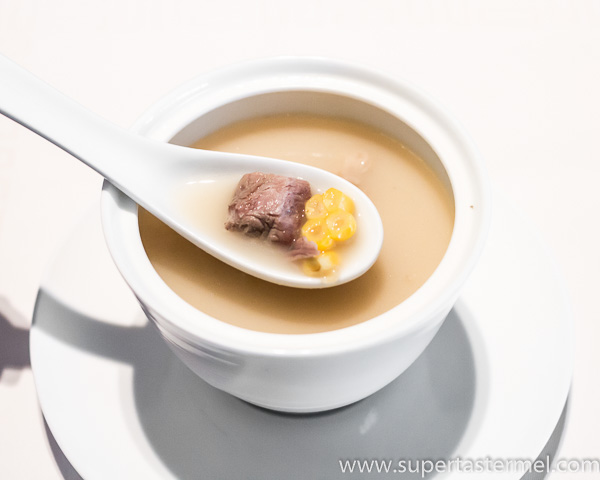 The Barbecue Combination contained barbecued pork with honey, marinated fragrant chicken in soy sauce, and marinated jellyfish. I've had better marinated chicken and jellyfish elsewhere while the barbecued pork was the most impressive of the selection with its honey flavor and meaty texture. 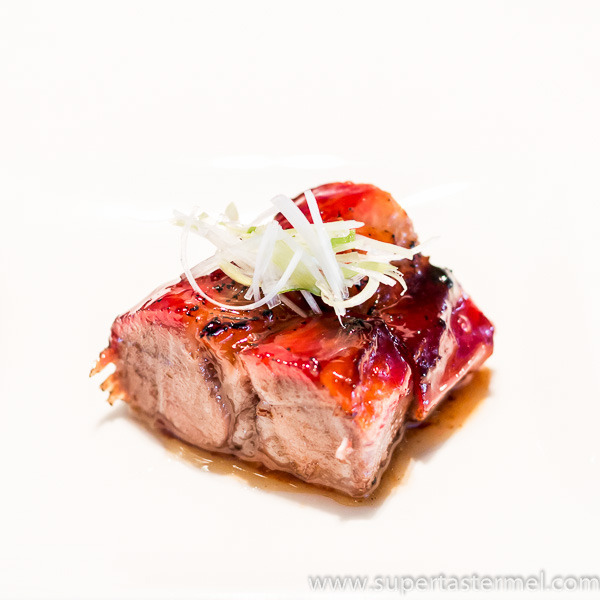 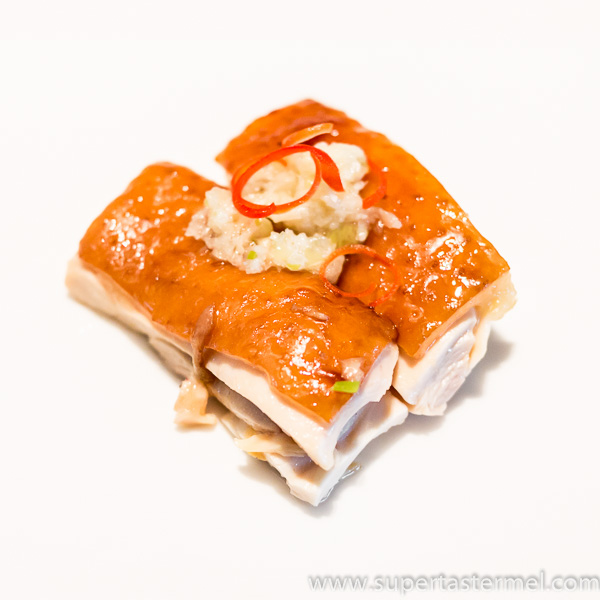 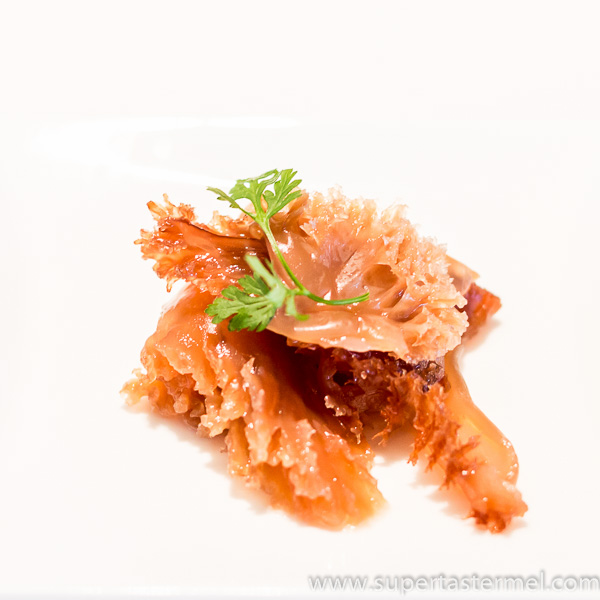 The Sauteed Australian Beef Chuck and Mushrooms in Fermented Bean Sauce was flavorful enough but J thought the beef was a bit too oily with too much sauce. 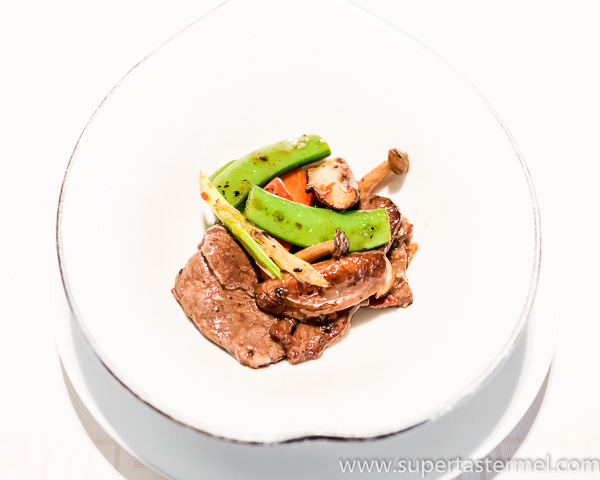 The Fried Rice with Seafood was a bit too "wet" as well as the gold standard for fried rice should be dry enough to the point where you can taste each grain of rice separately. 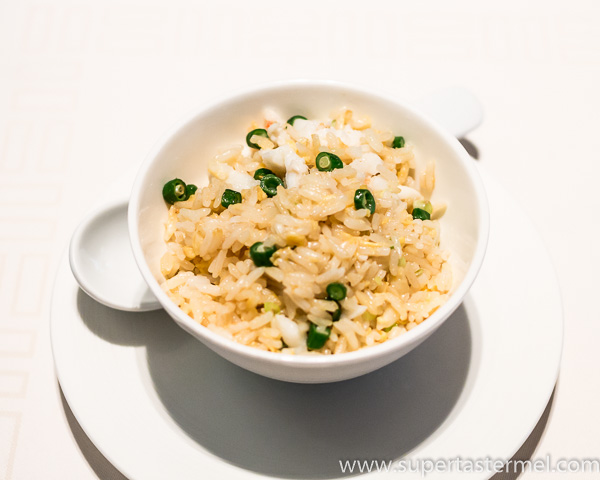 The Shrimp Wonton with Noodles in Soup was probably the fanciest wonton noodle I've ever had and while I liked the egg noodles and the broth, the wonton had the same issue with the shrimp dumpling in that it lacked the fresh prawn flavor. 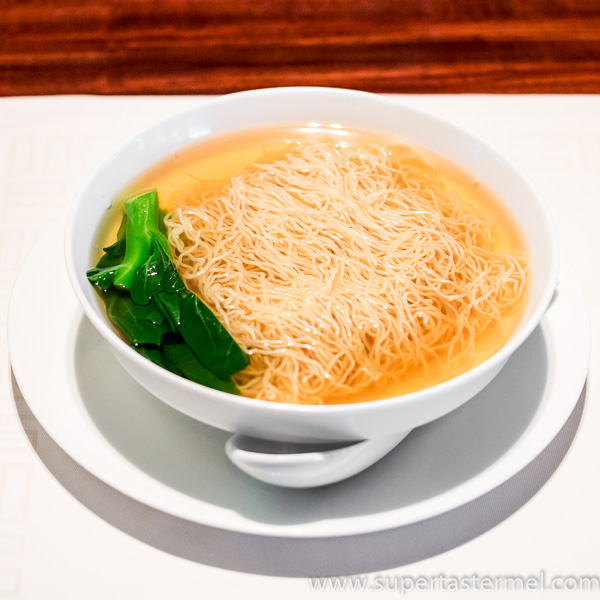 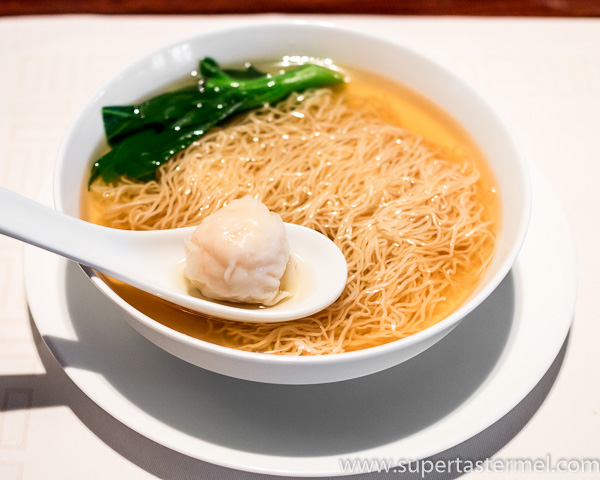 For dessert, the Chilled Red Date Soup with Longan was appropriate for the humid summer weather in Hong Kong with its refreshingly chilled soup and delicious osmanthus jelly. 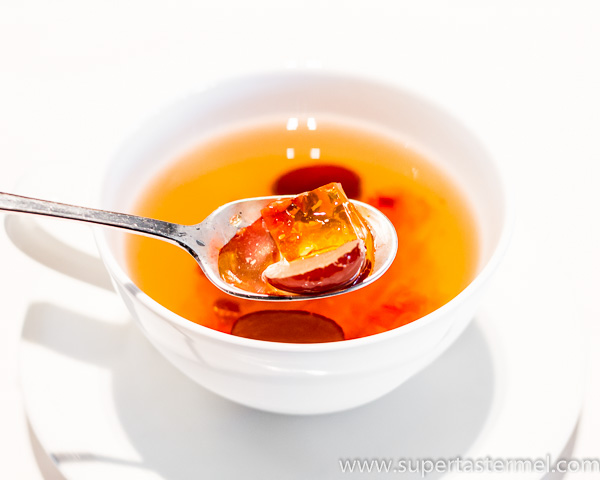 The Petit Fours with red bean cake and green bean puff pastry marked the end of our lunch. 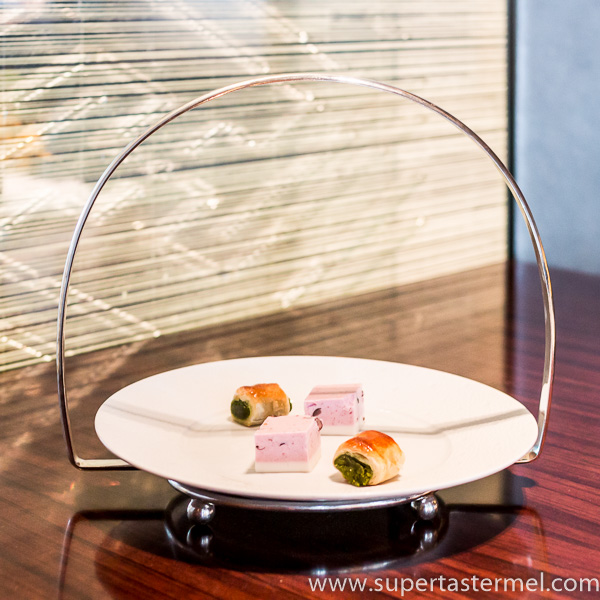 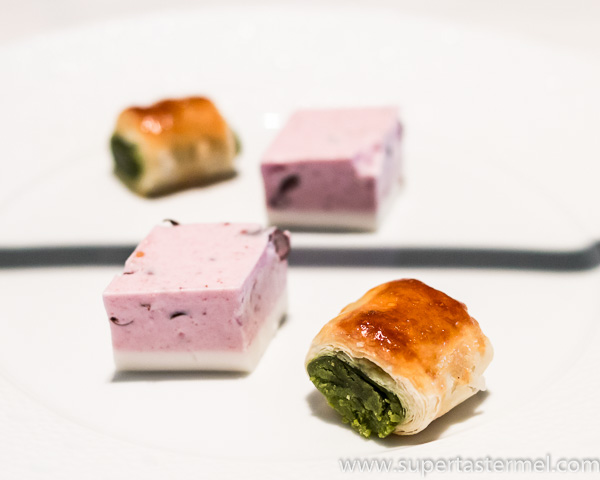 Verdict - the meal wasn't cheap at Lung King Heen but you certainly get what you pay for in terms of food quality and service. I think the 3 Michelin stars is well-deserved and I already make a booking to come back in 2 months to try more dim sum on the weekends!