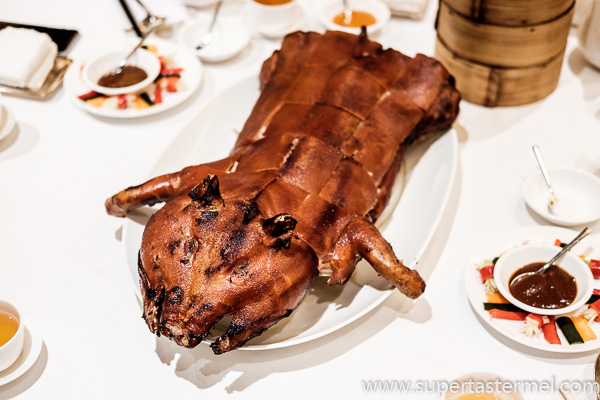 Continuing our exploration of Chinese restaurants in Hong Kong, we dined at Seventh Son Restaurant (家全七福酒家) with our parents one night. There's almost always some interesting drama about traditional Cantonese restaurants and Seventh Son is no exception as it is an offshoot from Fook Lam Moon (福臨門) where a family dispute led to the creation of Seventh Son a few years ago. If you're not familiar with Fook Lam Moon, it's famous for its quality traditional Cantonese cuisine and is frequented by many of the tycoons in the city so it has the nickname "Cafeteria for the Wealthy (富豪飯堂)". Many of the dishes and staff here came from Fook Lam Moon so comparisons are inevitable but unfortunately I haven't been to Fook Lam Moon yet so I can't compare. The quality of the food at Seventh Son was definitely really high though and one of the more impressive Chinese restaurants I have eaten in HK to date. 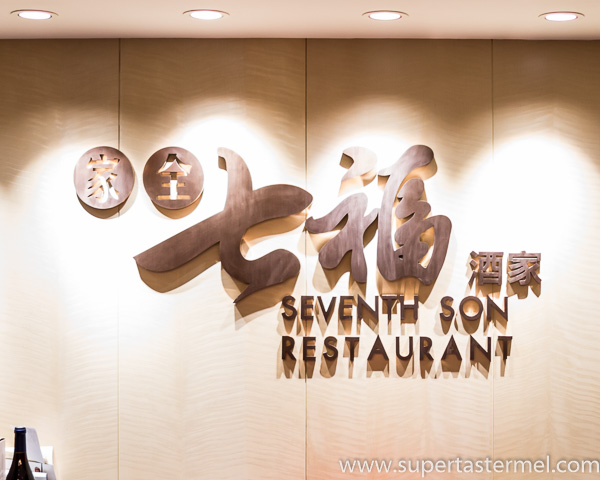 One of the most famous dish here is the Roasted Whole Suckling Pig that needs to be ordered in advance. You can have the suckling pig in one of two ways - with skin only first and the meat torn up afterwards or skin and meat together. We had the former and I loved being able to enjoy the crispy skin along as well as the tasty meal along the ribs.

The Golden Coin Chicken is a traditional Shunde dish that is hard to find in restaurants nowadays because of the amount of work required to make it. It's comprised of a layer of lean pork, chicken liver, and pork lard where a string of layers are skewered and covered in honey while cooking - hence resembling a stack of coins. 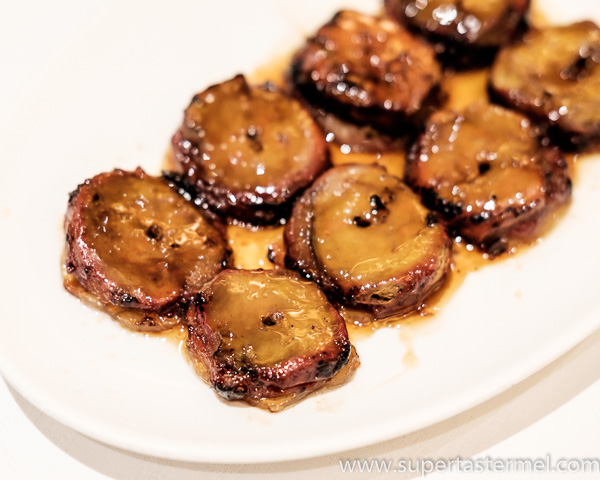 Chargrilled Crispy Pork Belly and Barbecued Pork with Honey Sauce ($200) - the pork belly was the more impressive one out of the two with its super crispy skin while I've had better barbecued pork elsewhere. 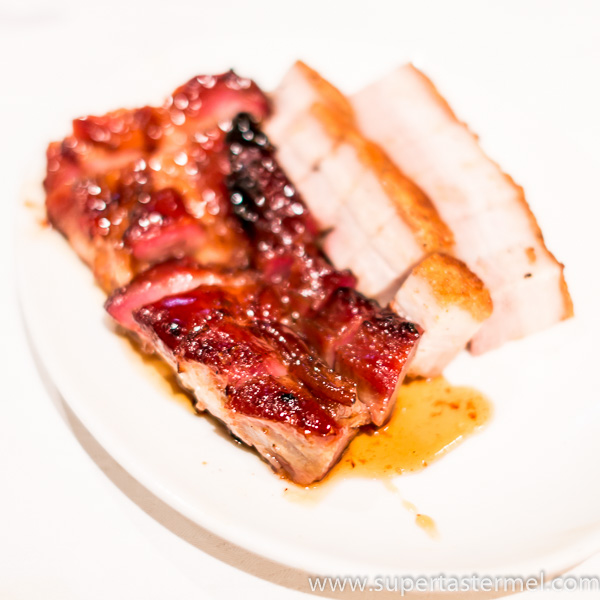 While I've never been a big fan of century eggs in general, the Century Eggs with Pickled Radish ($140) was really good here especially when eaten with a piece of the flavorful pickled radish. 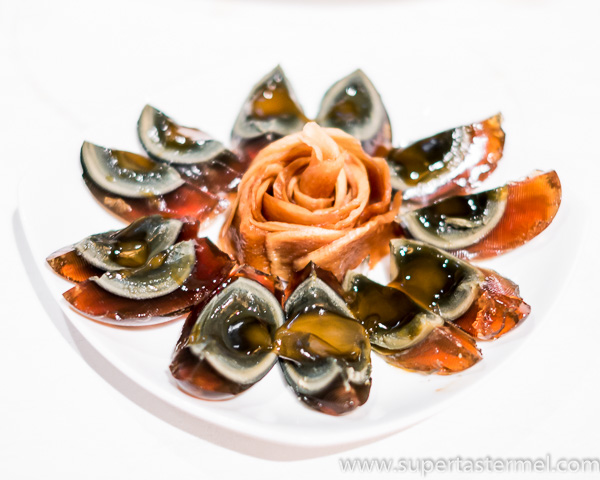 The Honey Glazed Barbecued Chicken Liver ($180) is apparently one of its specialities here and it was really as good as chicken liver could taste. 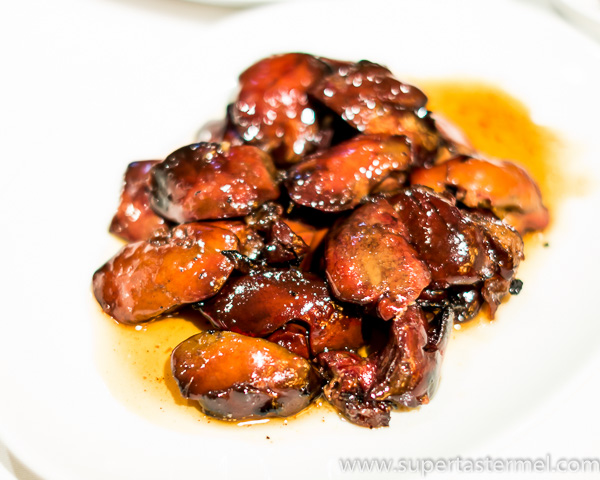 The Deep-fried Chicken Kidney Mixed with Egg Custard ($180) is another traditional dish that's hard to find and while there are some versions that uses chicken testicles, kidney is used here instead resulting in a smooth custard-like filling. It was certainly interesting with a subtle sweet savory flavor but it's not the best version I've had. 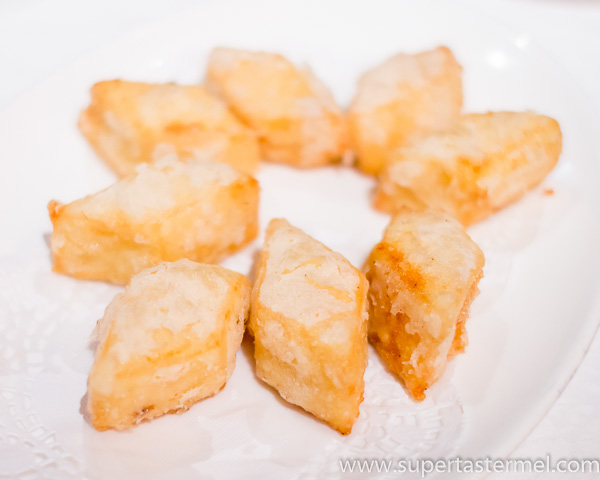 Our vegetables of the night was Pea Shoots with Fried Yuba (tofu skin). 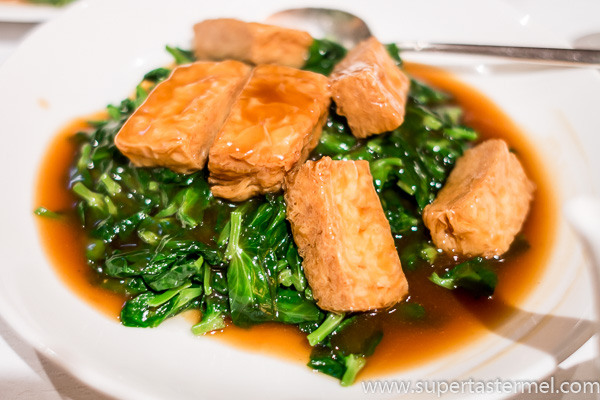 The Sauteed Fillet of Pigeon with Crispy "Kam Wah" Ham ($260) is another specialty here that requires 45 minutes of waiting due to the long preparation time. I've had roast pigeons before but not pigeon prepared in this way so it was quite unique to me. The Kam Wah (or Jin Hua) ham is a type of Chinese-style cured ham and I've always thought it would be too salty to eat standalone but the way it was prepared here was really nice and went perfectly with the pigeon. 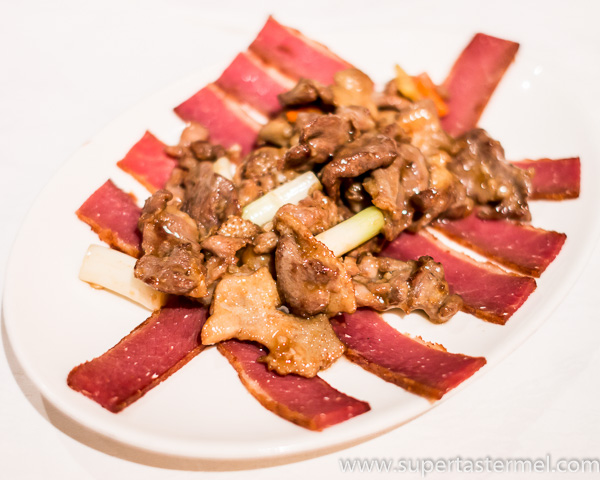 The Seventh Son's Famous Crispy Chicken ($230/half) was a bit of a let down though as the seasoning seemed uneven (J had pieces that were really salty while mine were quite bland). 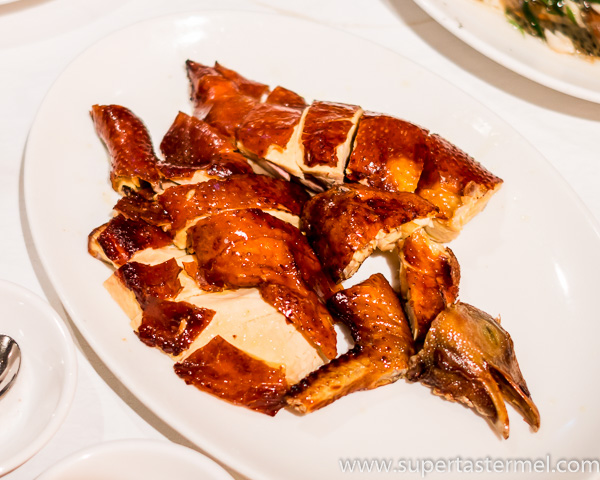 The cool weather recently was perfect for Clay Pot Steamed Rice with Preserved Meat ($120/2 people) where the preserved meat and the rice (which I forgot to take a picture of) were served separately. The preserved meat included quality Chinese sausage, liver sausage, preserved pork belly and preserved duck leg while the rice had deliciously crispy edges - I highly recommend getting this dish! 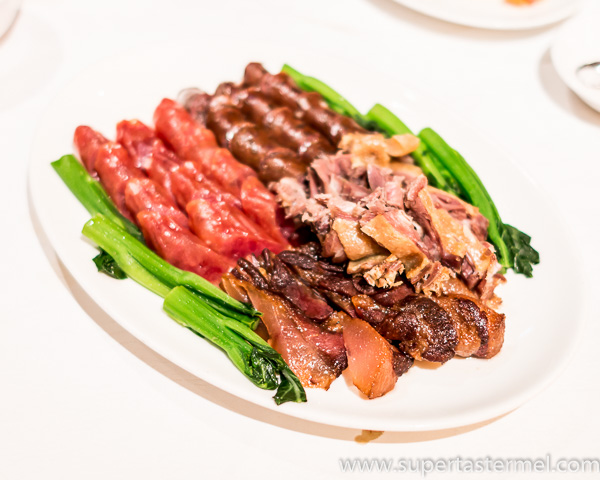 Desserts continued to impress with this traditional Chinese dim sum Black Sesame Roll ($45) that has been nicknamed film roll because it looks just like one. It's also a dish that's pretty hard to find in restaurants now so it was good a get a familiar taste from childhood. 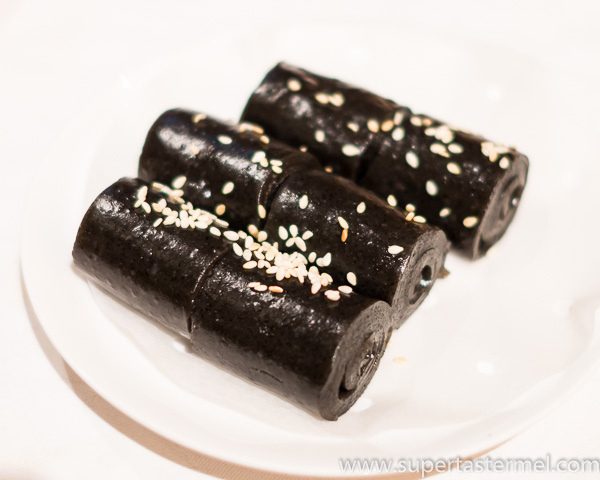 The Leaf Wrapped Glutinous Dumpling with Red Bean ($45/3 pcs) was also delicious as I loved the soft and chewy mochi skin wrapped around the red bean filling! 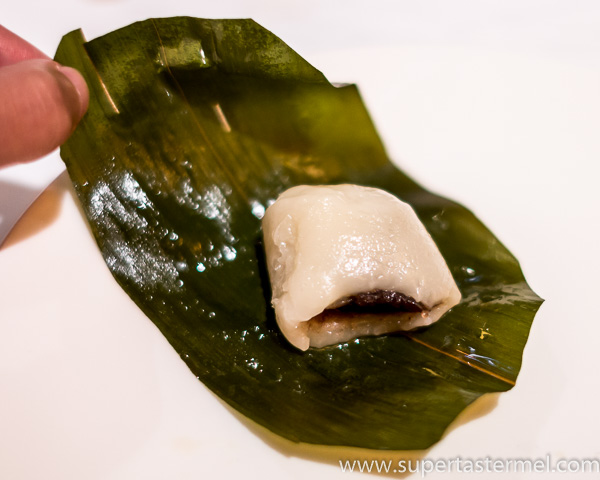