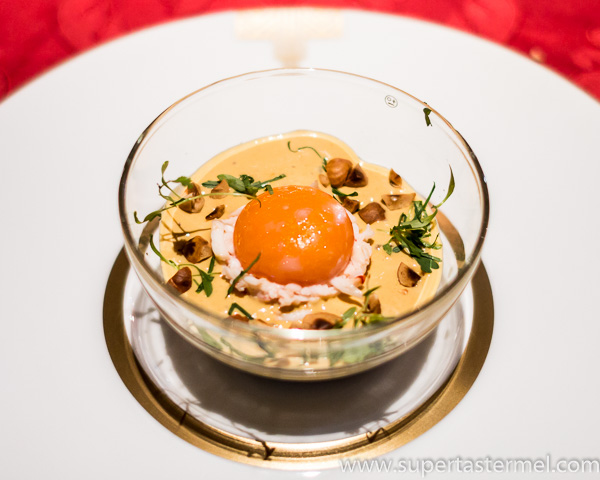 I was thrilled to attend the Michelin & Robert Parker Wine Advocate Gala Dinner last week at Studio City in Macau which featured an extravagant 12-hands gastronomical line-up of 6 esteemed chefs from top Michelin-starred restaurants around the world including Alvin Leung of 3* Bo Innovation in Hong Kong, Hideaki Matsuo of 3* Kashiwaya in Osaka, Bjorn Frantzen of 2* Frantzen in Stockholm, Shinji Kanesaka of 1* Sushi Kanesaka in Tokyo, Guillaume Galliot of 2* The Tasting Room and Tam Kwok Fung of 2* Jade Dragon in Macau. We also had a very special guest - celebrity Nicholas Tse who has been recognized as the first "Friend of Michelin" - and desserts by one of my favorite pastry chef Pierre Herme! 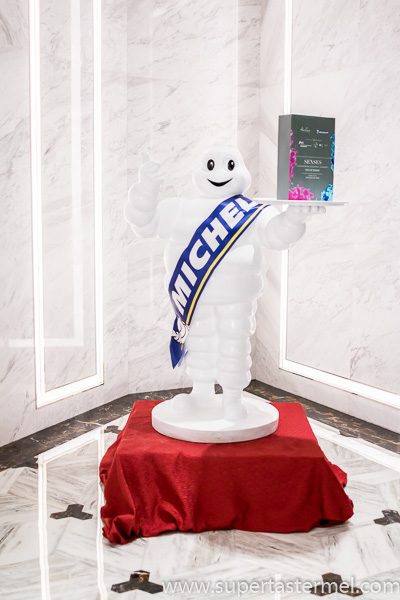 The gala dinner was held at the Grand Ballroom in Studio City with opulent decor that seeks to pay tribute to Hollywood's legendary golden age complete with a little golden man as the table holder at each table. 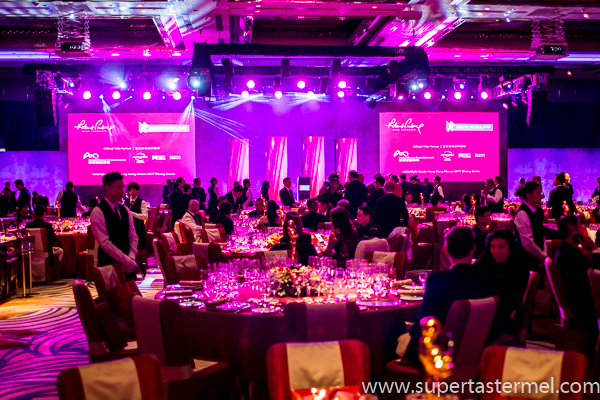 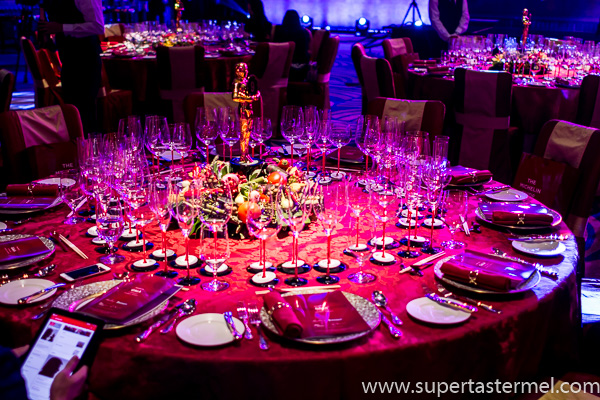 The brochure at the table included the menu for the night as well as short interviews with each of the 6 Michelin-starred chefs. 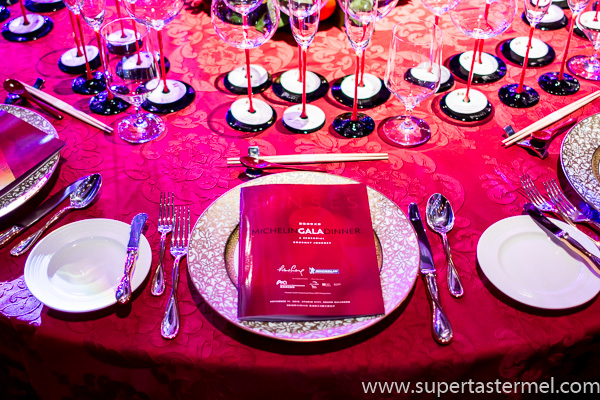 Good food is incomplete without good wine of course so we had wine pairing with some of the world’s most sought-after wines including the 2004 Champagne Pol Roger, 2006 Chateau Latour à Pomerol, 2006 Chateau Hosanna, 2006 Chateau Trotanoy, 2006 Chateau La Fleur-Petrus, and 1888 ABF Old Tawny Port from Quinta do Vallado. 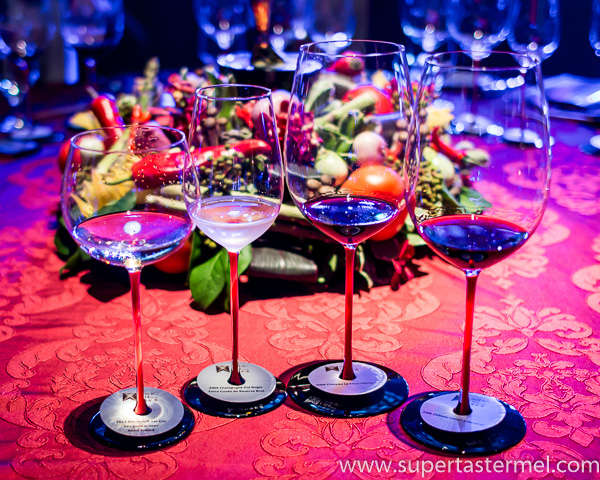 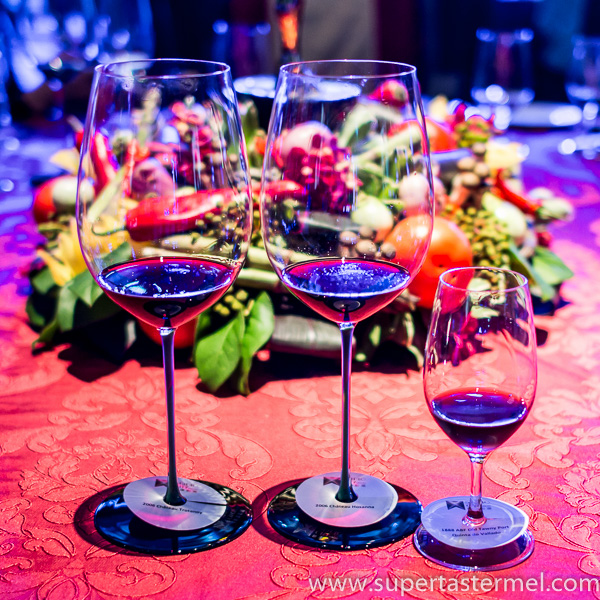 The amuse bouche of the night was by Hong Kong celebrity Nicholas Tse and we got to watch him introduce his dish before it came out! I knew that he had his own cooking show and cookies shop but I was still pleasantly surprised that he can cook this well (and especially for 700 people in one setting which must have been a lot of pressure). Watch the video below to see him in action and explain his vision for his creation!

Chef Nic's Senses of Fall was beautiful to look at with a light, vibrant gazpacho of roasted bell peppers, tomatoes and cucumbers paired with combinations of freshly basked crisps. The twig was not edible and we were instructed to use it to break the maple leaf crisp into the gazpacho which was refreshing to drink. The crisps were more impressive with a 0.3mm thickness and came in 4 flavors (sweet, sour, bitter and spicy) to represent all the pleasures and pains we experience in life. 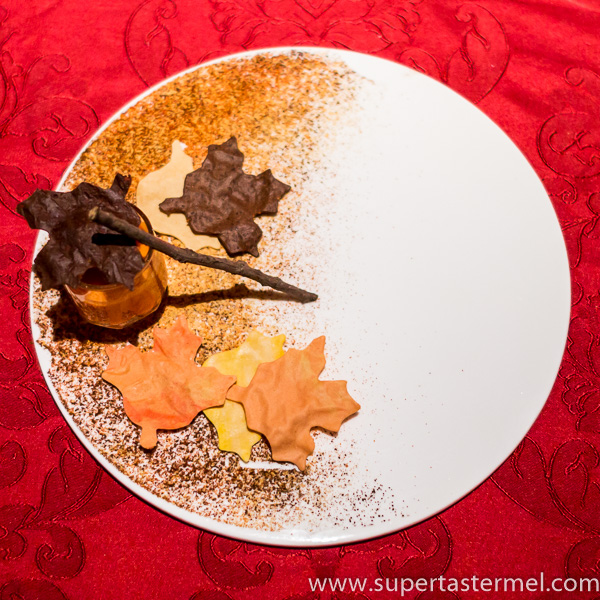 Next up was a decadent Japanese appetizer of Otoro Fatty Tuna Belly, Sea Urchin and Hokkaido Ikura by Shinji Kanesaka. 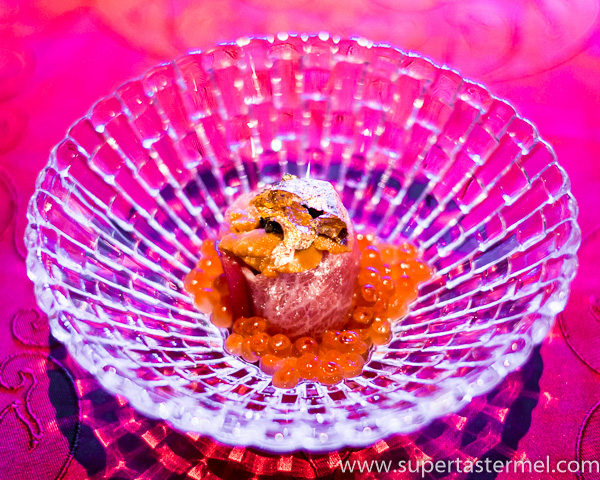 The Alaskan Snow Crab Salad with Laksa Foam by Guillaume Galliot featured a unique combination of Asia-inspired flavors with the freshness of Alaskan crab meat. 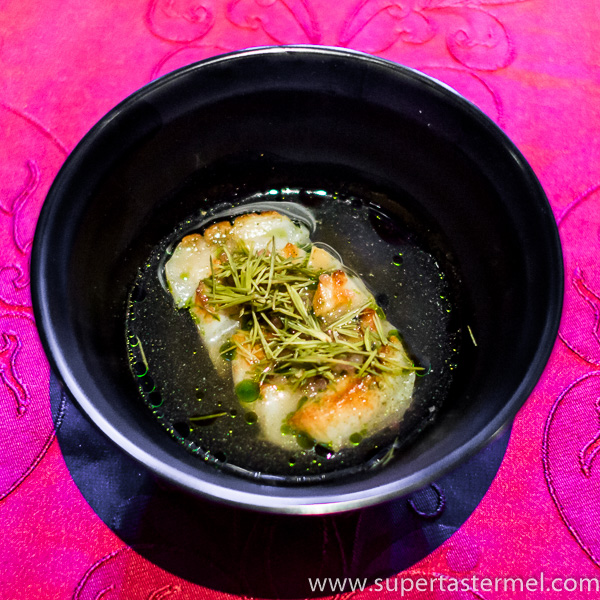 The Osmanthus-Smoked Racan Pigeon baked on charcoal with Chinese herbal tones by Tam Kwok Fung was an ambitious and interesting integration of the French bird with the aromatic osmanthus fragrance. 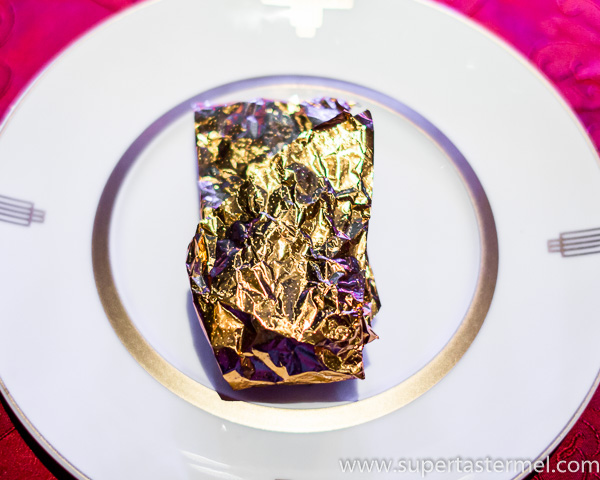 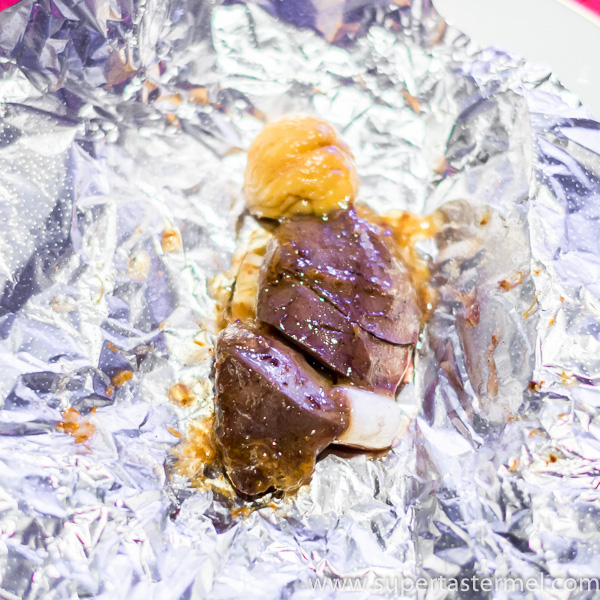 The Soft-poached Ise Lobster, Shiitake Mushrooms and Layered Seaweed by Hideaki Matsuo arrived as presents waiting to be opened. I liked the box of seaweed a lot which came in a myriad of shapes, colors, textures and flavors. 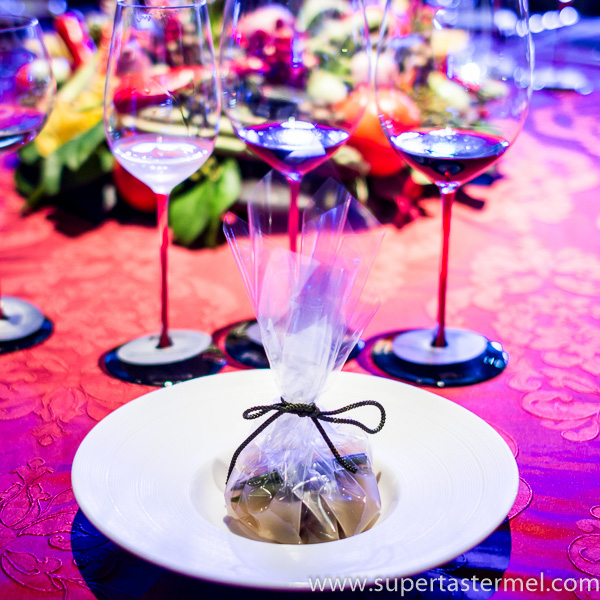 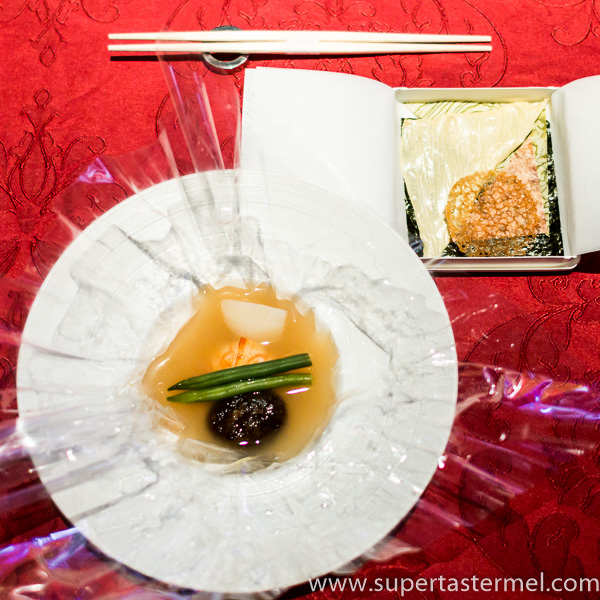 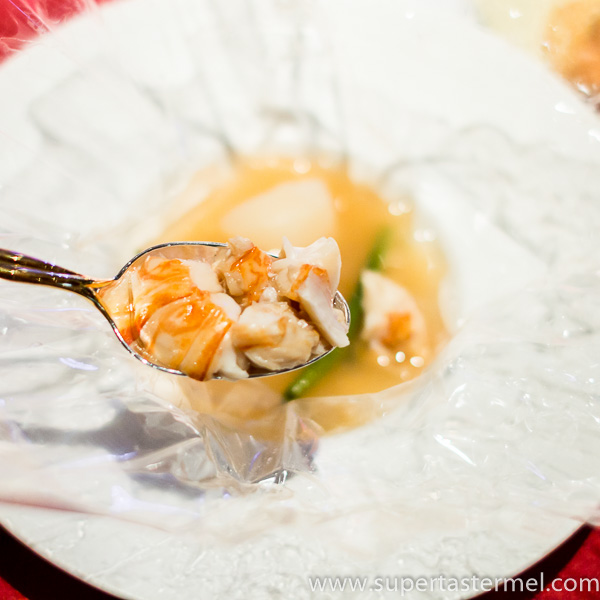 The Demon X-Treme Beef by Alvin Leung was the last savory dish of the night and it seemed to be his take on Cantonese-style beef brisket that had been dressed up for the occasion with a few slices of white truffle. 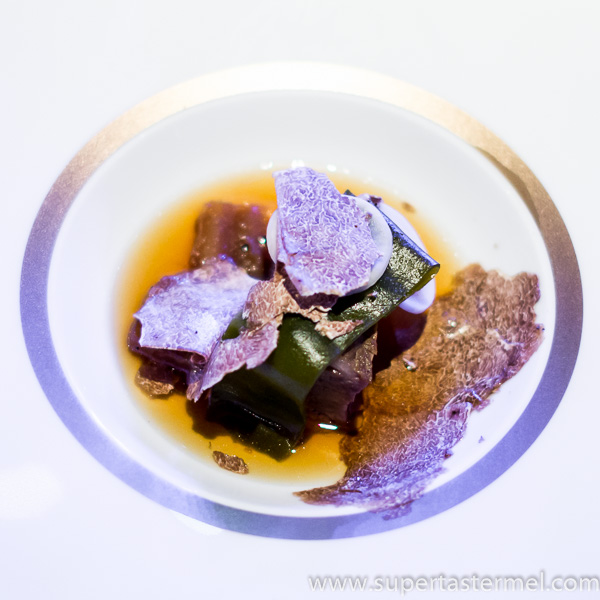 For dessert, we were treated to A Sensational Single-Origin Brazilian Bitter Chocolate Experience by Pierre Herme which arrived in smoke and transformed in front of our eyes with a pour of warm chocolate. 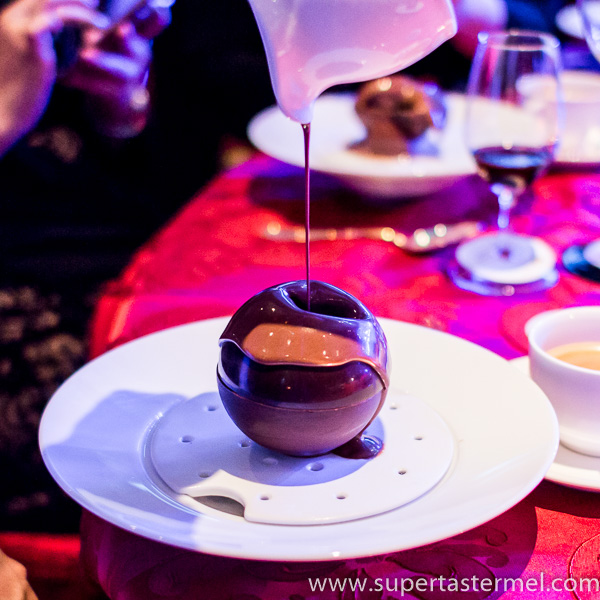 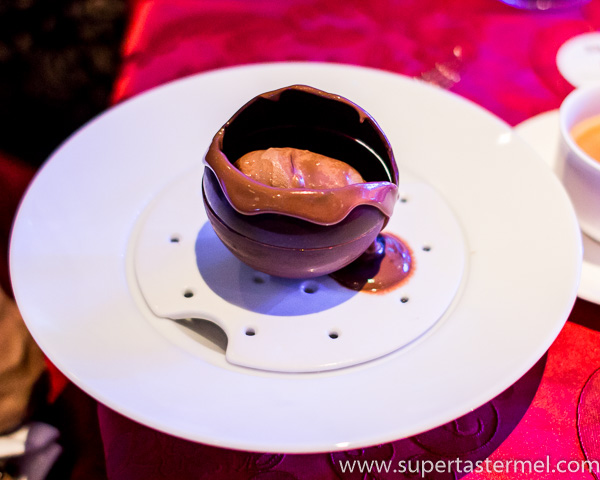 The Petit Fours by Pierre Herme included his signature macarons and chocolates. 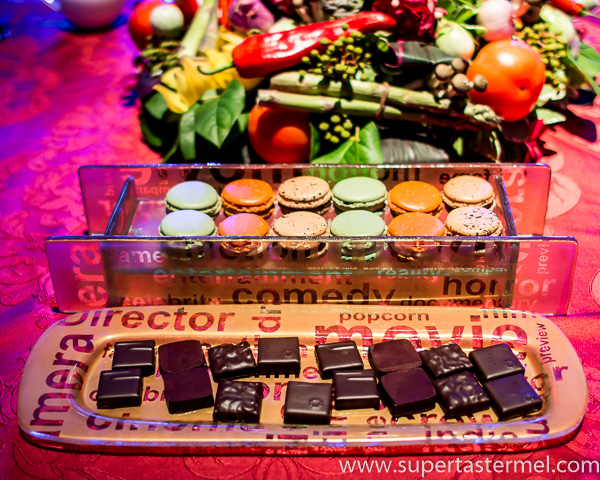 A big thank you to the Michelin Guide, Robert Parker Wine Advocate and all the chefs for the sensorial gourmet journey in Macau! 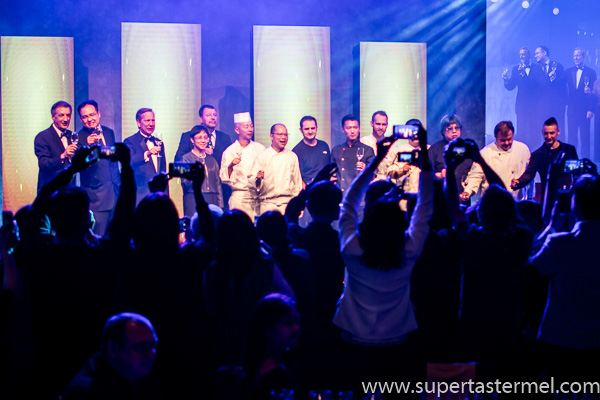