The first ever overseas branch of Tokyo's 3* Sushi Saito has finally opened in Hong Kong! As most foodies would know, Sushi Saito is one of the hardest reservations to get in Tokyo so it is possibly the most anticipated restaurant opening in HK this year. To ensure the same food quality as the Tokyo branch, Chef Takashi Saito personally selects the seafood at the Tsukiji Market every morning to be flown into HK before lunch service. Even the soy sauce, rice and red vinegar are identical to the original Sushi Saito.

So how can you get a reservation here? Unfortunately reservations are not yet open to the general public at the moment; priority is given to VIPs of Four Seasons Hotel and Global Link restaurants including Tenku Ryugin, Ta Vie and La Bombance (I hear the restaurant is already fully booked until June). The restaurant is currently open 7 days a week with 1 lunch service at noon and 2 rounds during dinner starting at 6:30pm. The full omakase including tsumami and nigiri is served at dinner for HK$3280 (+10%) per person while a shorter version is available at lunch for HK$1480 (+10%).

The chef at the helm of Sushi Saito in Hong Kong is the talented 29-year-old Ikuya Kobayashi who was Saito-san's second-in-command and has worked at the original restaurant for 8 years. 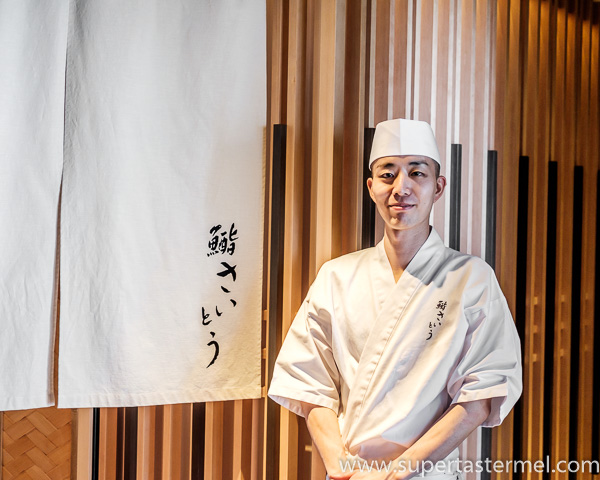 Located on the 45/F of Four Seasons Hotel, the restaurant has two counters which can accommodate 16 guests in total but currently only one is opened at the moment. The beautiful wooden counter is made from a 400-year-old cypress tree and the smell was so strong I could smell it all the way from the entrance. 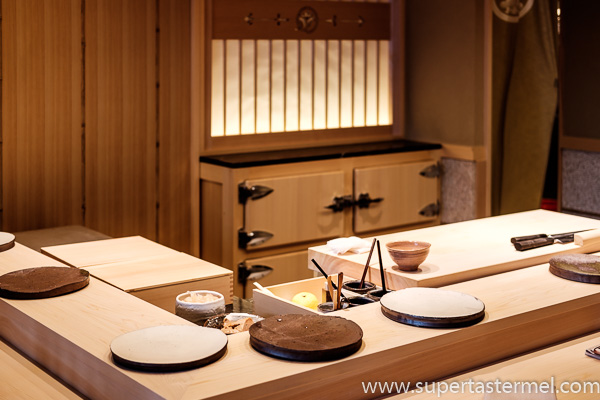 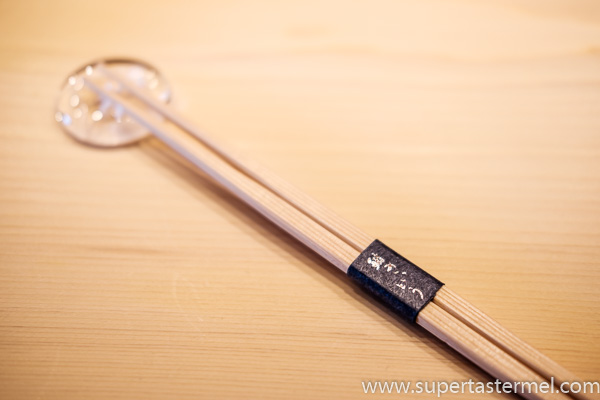 I was here for lunch with J and we started with 2 tsumami (appetizers) before moving onto the nigiri portion of the meal. The first tsumami was the ankimo (monkfish liver) and it was luscious with a super smooth texture like a chocolate mousse. 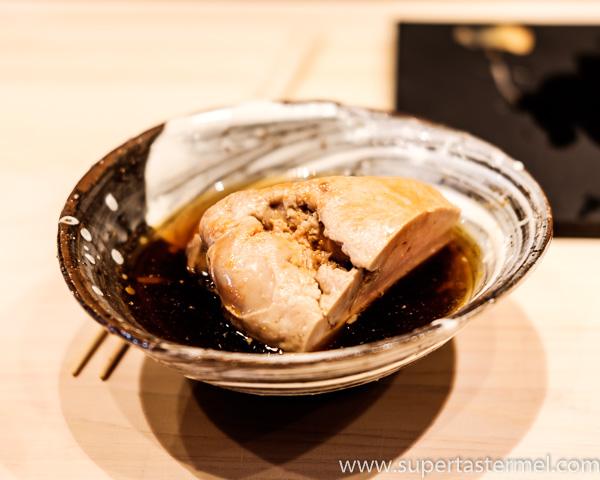 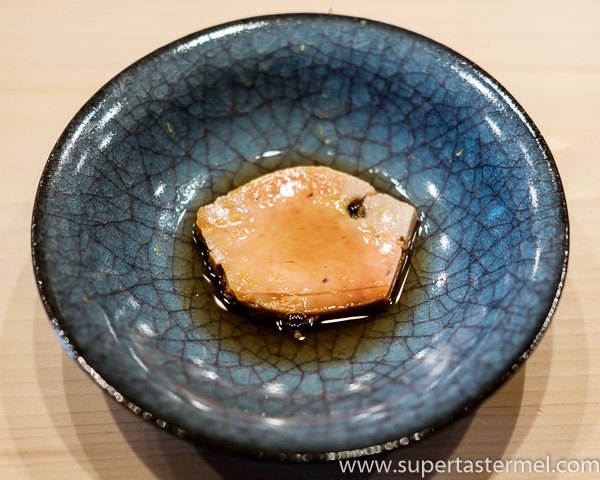 The grilled nodoguro (blackthroat seaperch) was plump and juicy while the pickles on the side were fantastic as well. 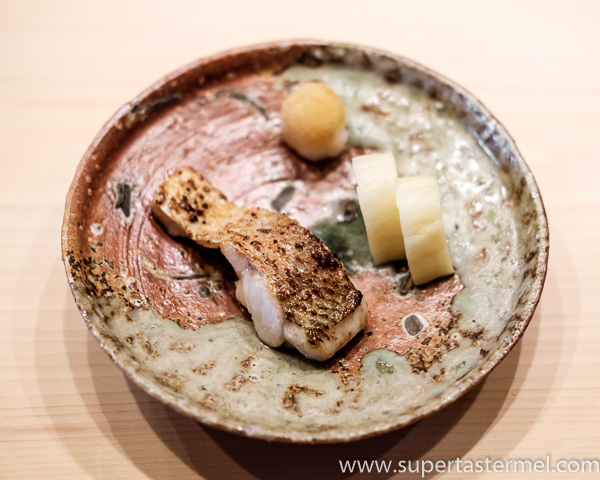 Then it was time for the nigiri portion of the meal. 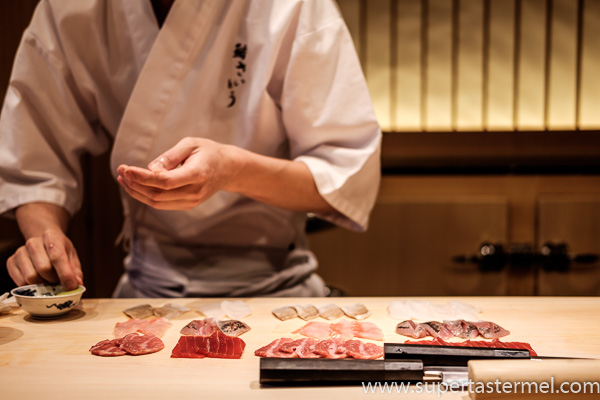 Sushi chefs all have different styles, and I think Saito-san is known for preparing all the neta (fish) first and laying them on the counter before starting the nigiri service. I'm told that Saito-san places a lot of emphasis on the shari (rice) and he uses different temperatures of rice to pair with different types of fish. 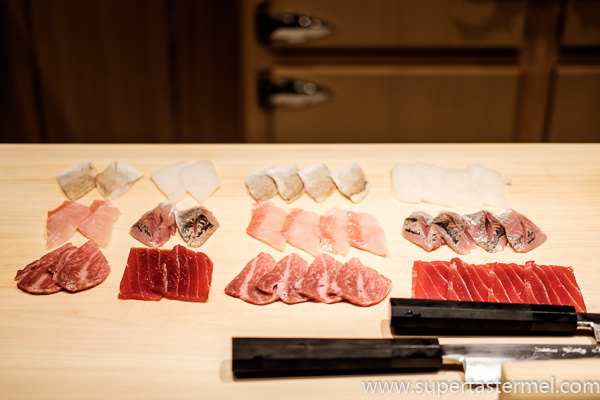 It's always fun to observe how sushi chefs make nigiri as they all have unique styles and rhythm. Koba-san tends to squat down a little bit before launching into his routine. He flicks his right hand with the neta a few times and uses one finger on his left hand to shape the nigiri. From what I hear (since I haven't been to Sushi Saito in Tokyo), Koba-san's style is softer compared to Saito-san's and hence his nigiri (and his shari) tends to be looser. 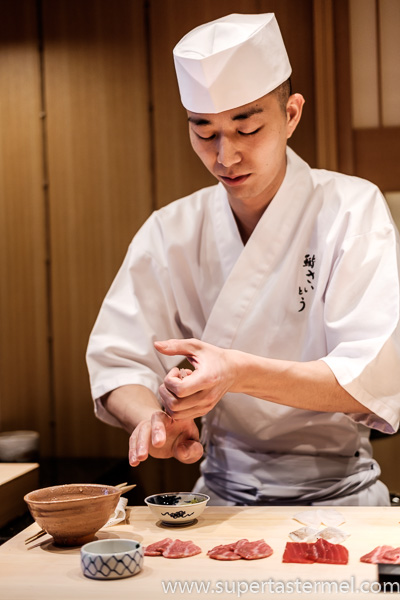 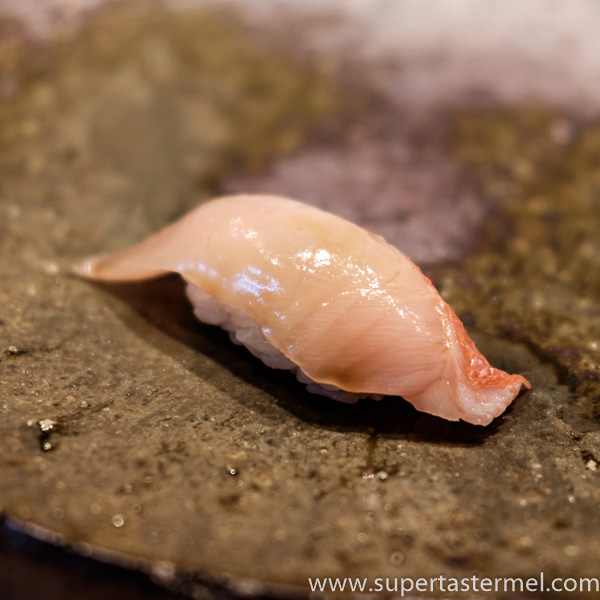 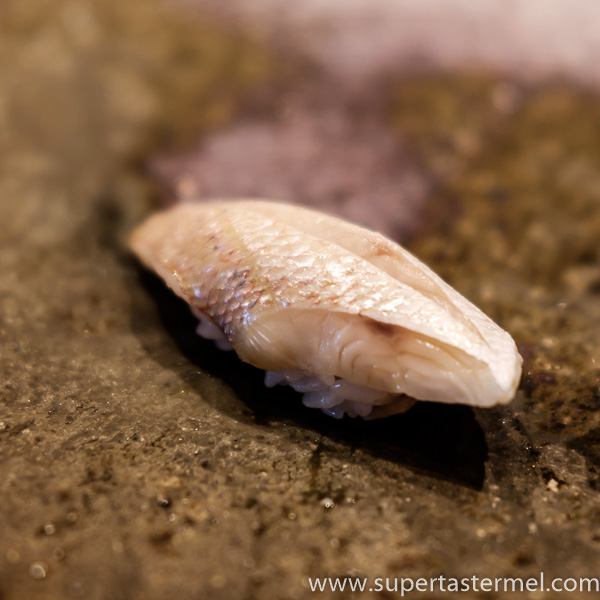 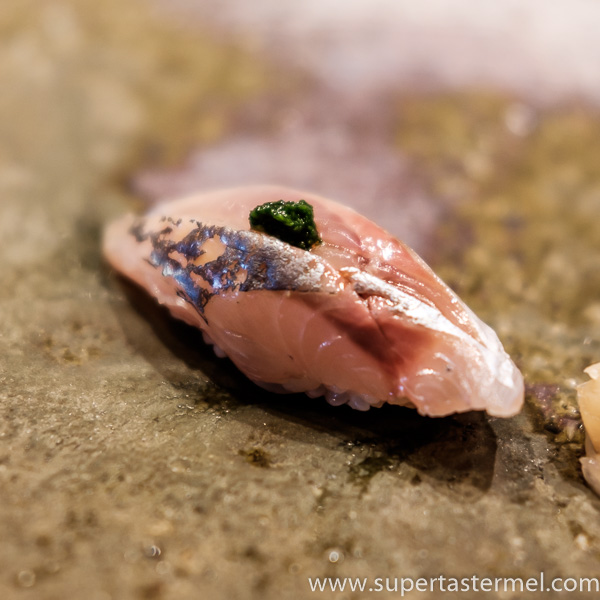 The Akami was one of the best pieces in the meal. The tuna was briefly marinated in soy sauce at the counter and it was really flavorful. 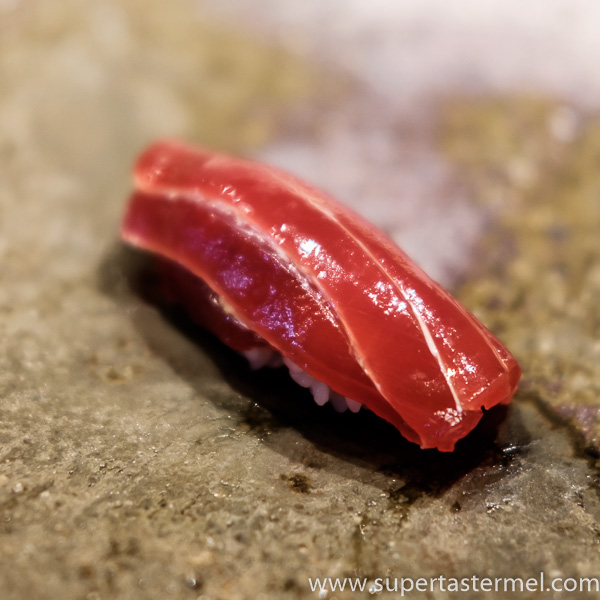 The Otoro had a chewier mouthfeel than what I'm usually used to; I'm told that's because Saito-san prefers the area near the tendon for fatty tuna. 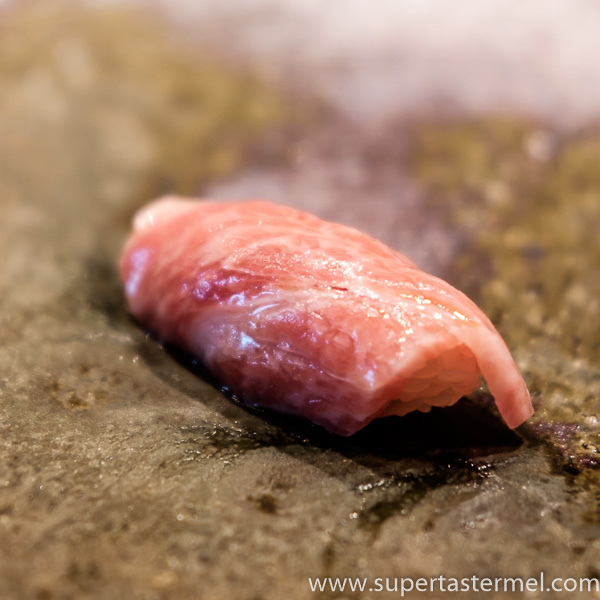 The Sumi-Ika (Cuttlefish) was served next and we were a bit curious about the order of the nigiri as it tends to be served in the beginning (due to its lighter flavors). Koba-san said that's just the style of Saito-san but he also thinks that perhaps the refreshing flavors will help to cleanse the palate after the tuna courses. 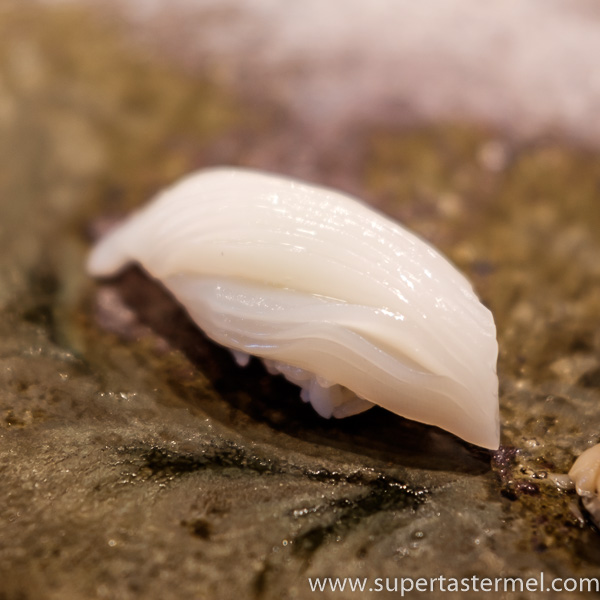 The Kuruma Ebi (Japanese Tiger Prawn) was boiled and then peeled in front of us. It was a lovely piece where we can taste the richness of the prawn's liver which had been placed between the prawn and the rice. 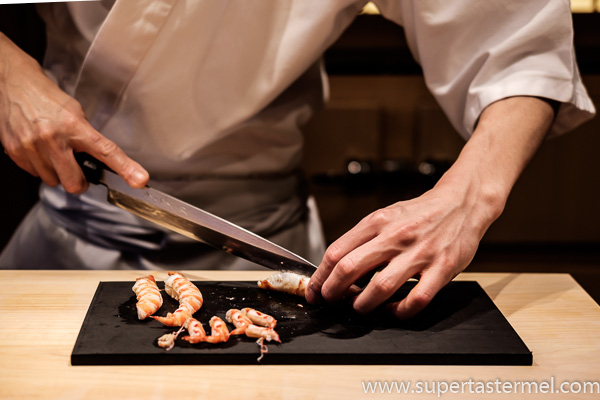 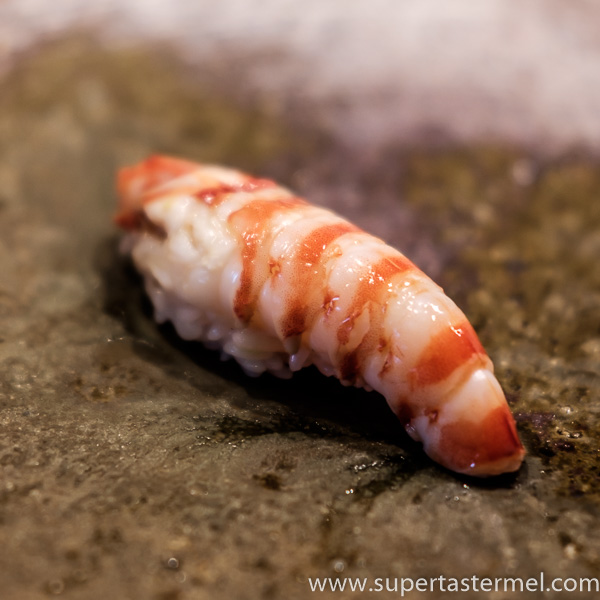 The Hamaguri (Common Hard Clam) was another highlight of the meal with its deliciously sweet flavors. 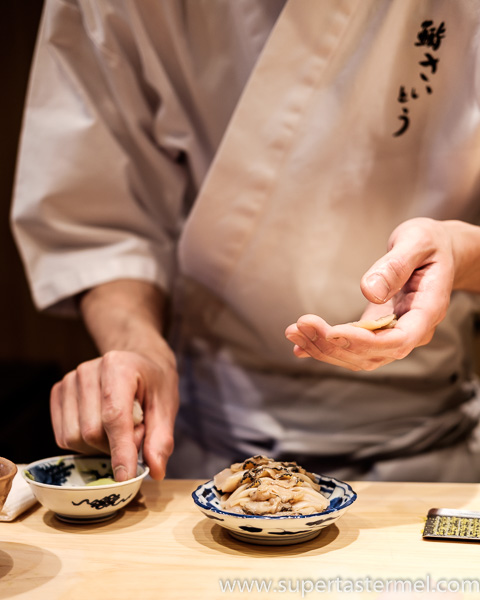 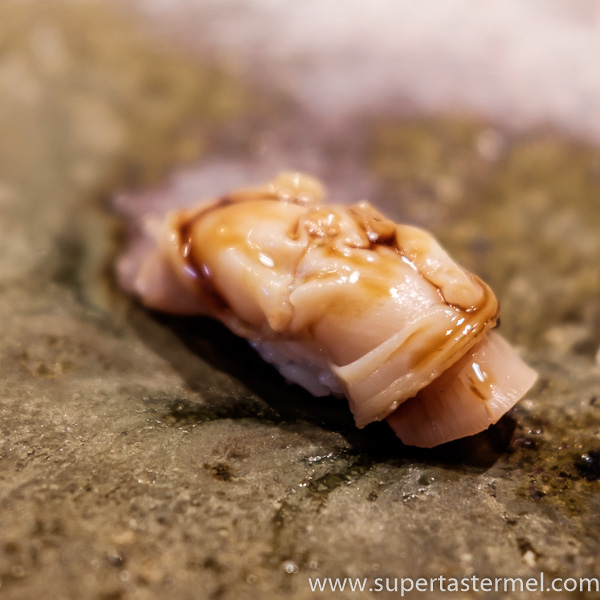 The Bafun Uni from Hokkaido would have been another highlight if it wasn't for the temperature of the sea urchin - it was too cold which stunted the flavors a bit. 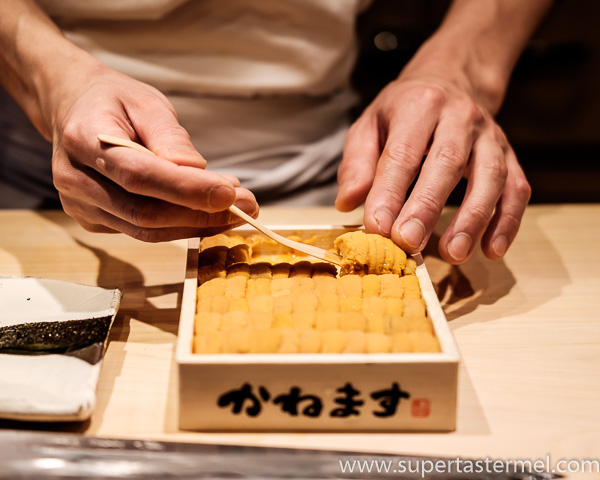 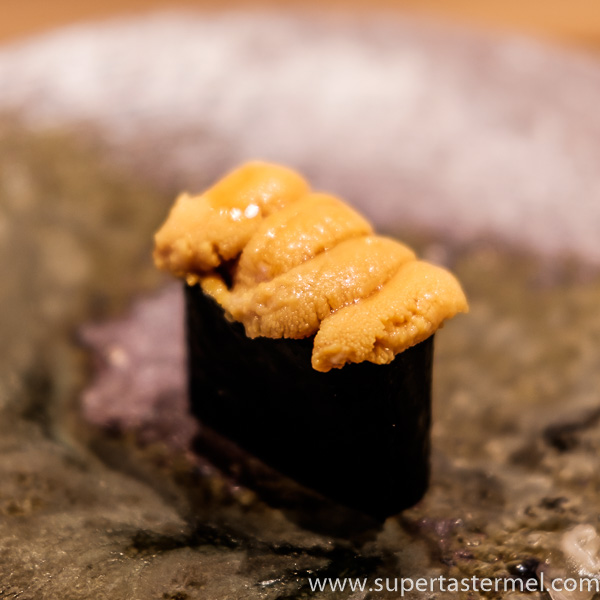 The Anago (Sea Eel) was served with tare sauce. 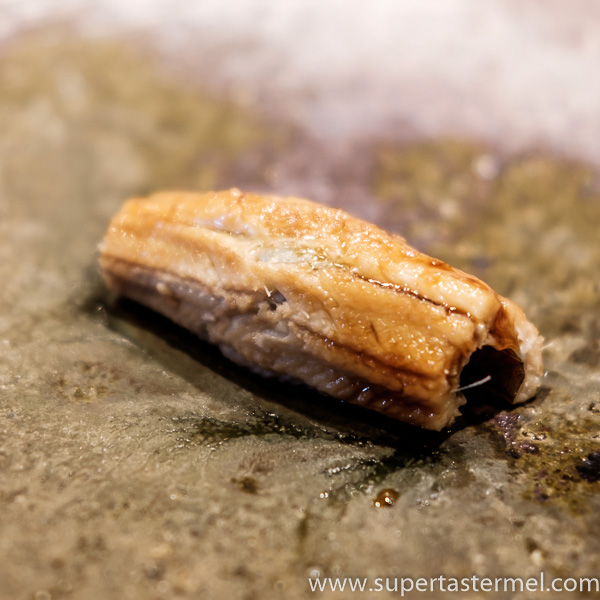 Lastly, we were served a futomaki with kanpyo (dried gourd), prawn, cucumber, egg and anago. 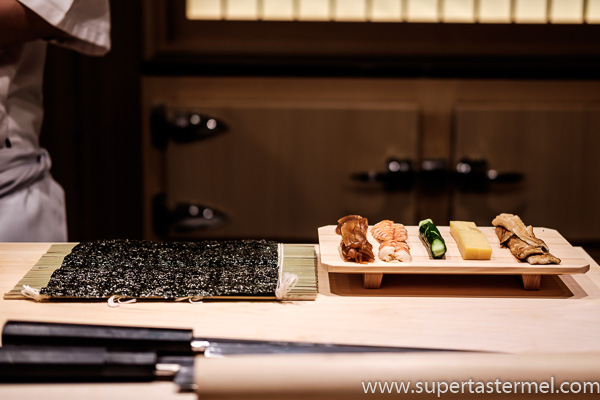 The Tamago (Egg) served as the finale of the meal and it was amazing! I've long heard about Sushi Saito's famous tamago and it was like a custard almost. It's all down to personal preference and I've had many different versions - spongy, savory, steaming hot - but I think this may be my favorite yet. 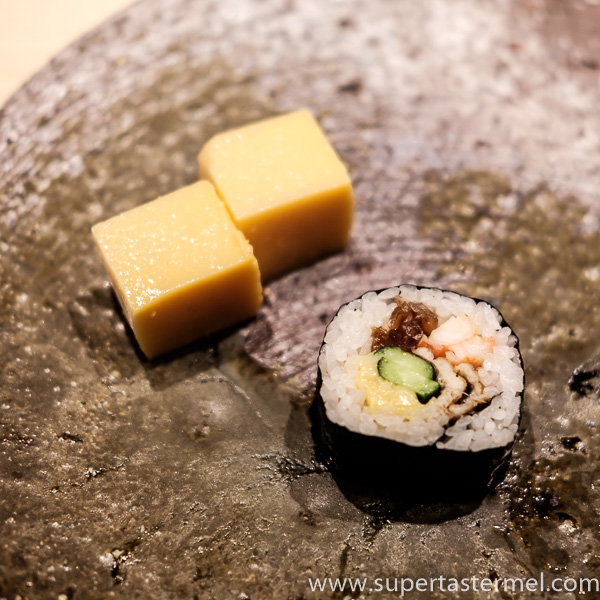 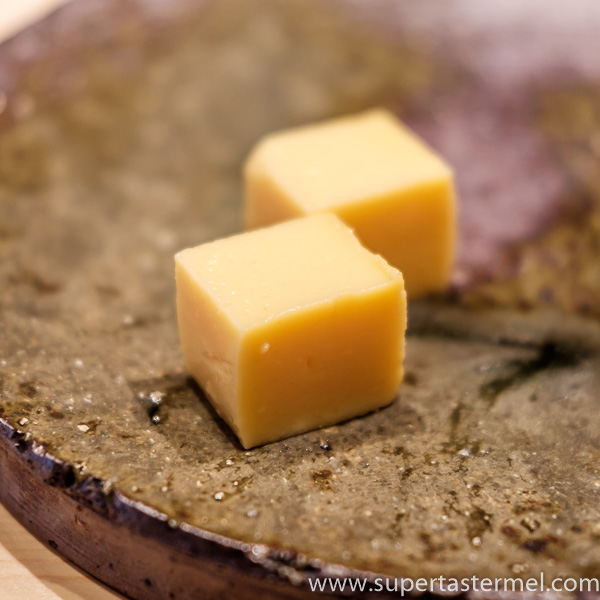 So the question I got asked the most about Sushi Saito in Hong Kong is "is it worth going"? My answer is definitely - I think it's like eating sushi in Tokyo without having to fly there. Although I haven't been to Sushi Saito in Tokyo, I have been to many others in Tokyo and the quality of the food here is on par and up there. My only feedback would be regarding the service. There were a few times where we almost ran out of gari (pickled ginger) and green tea before they were replenished. It got better towards the end of the service so hopefully with more experience, they can be more attentive and improve in this area.