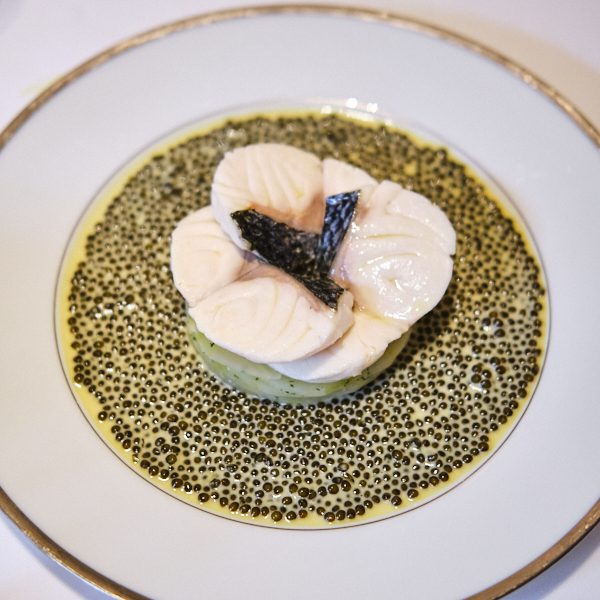 Rating: 4.5/5
A meal at L'Ambroisie in Paris - a French institution which had held 3 Michelin Stars since 1988. Chef-owner Bernard Pacaud trained at the famous La Mere Brazier in Lyon and Vicarois in Paris which shaped his cooking philosophy. Using only the best ingredients, the chef’s cooking is classic and flawless. Only a la carte is available and like most 3 star restaurants in Paris, it comes with a premium price tag with savory dishes ranging from €95-€170 each.
I had put off coming here because of the polarizing reviews that L'Ambroisie gets. The most common complaints are that it's too expensive and the cuisine is too classic and even boring. It is indeed pricey - the average price per head is at least €300 and that's without wine. While that's in line with other Michelin-starred restaurants in Paris, you'd usually get a tasting menu where you can try a variety of dishes as opposed to here where you will get just 2-3. As for the cuisine, I believe there's a time and place for classic French cuisine and you just have to have the right mindset going into the meal.Before our visit, I had studied the menu and poured over copious reviews to decide which dishes to get since the menu is only in French. I had also braced myself for the cold and stiff service that I had heard so much about but to my surprise, the staff were quite friendly and even bantered with J about his rusty French. We had a wonderful time here celebrating J’s birthday and it was definitely one of the highlights of our France trip! 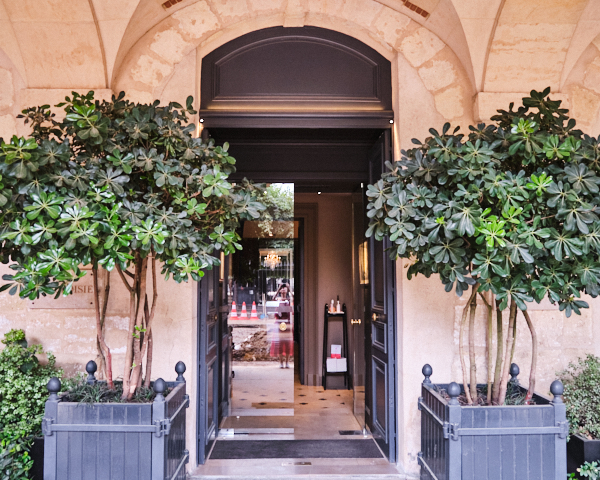 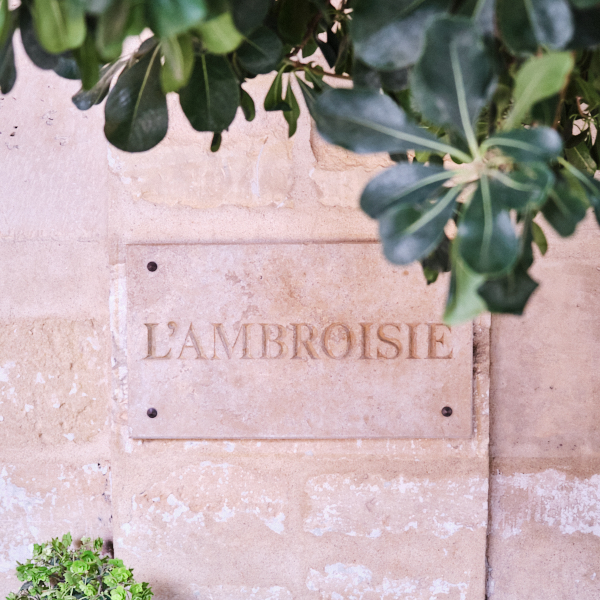 Upon entering the restaurant, we were led past the first dining room with regal decor to be seated in the second one which was more contemporary with stark red and white panels. 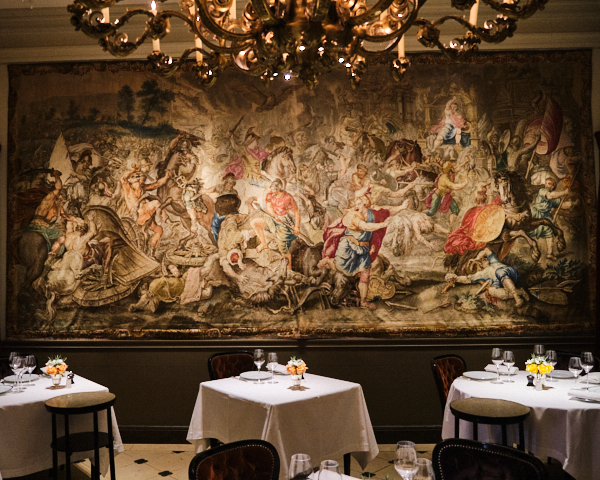 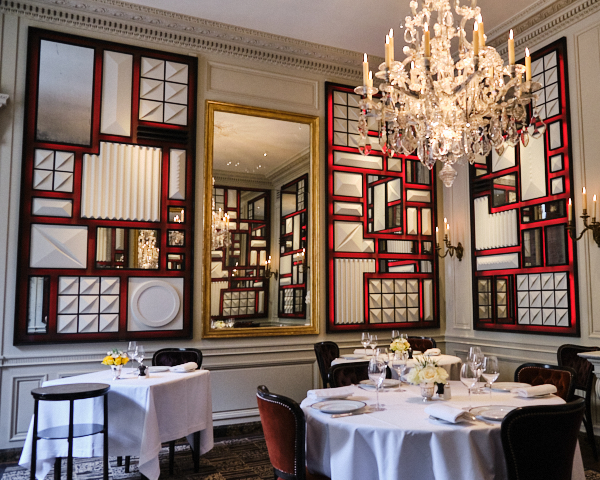 A glass of champagne to kick off the meal! 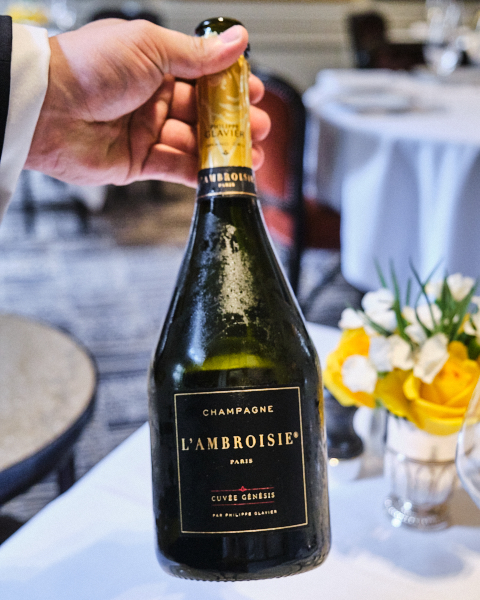 The menu at L'Ambroisie is a la carte only and one usually orders a starter, main and dessert. After ordering, our meal started with a small Kugelhopf brioche to share followed by a plate of amuse bouches - tart with carrot mousse & fennel, roasted leek with caviar, and shortbread with cheese & red pepper. 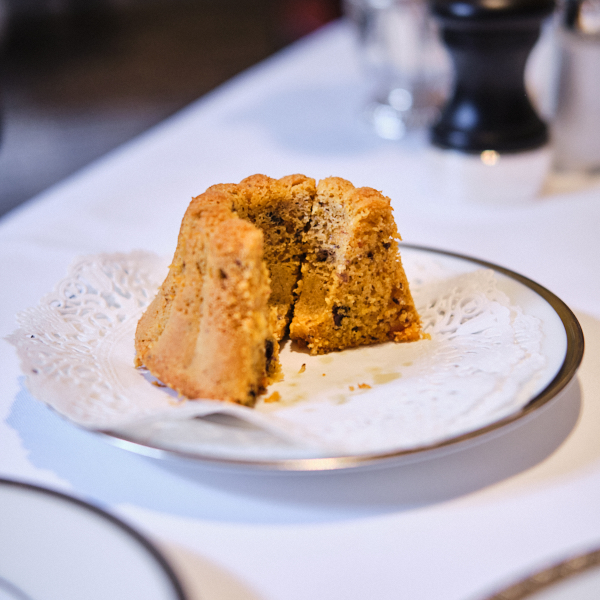 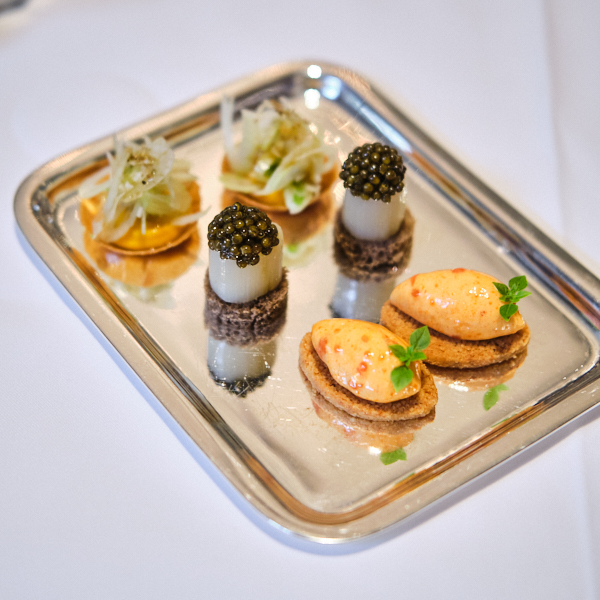 Chaud-froid d'œuf mollet à la moscovite, caviar Kristal (€140) - for my starter, I had the iconic Hot-Cold Soft-Boiled Egg with caviar and cucumber gazpacho. The egg was perfectly cooked with a warm liquid yolk in the center which paired wonderfully with the caviar and gazpacho. The flavors were a bit mild for me but it was refreshing for the summer weather. Inspired by a Moscow dish, it also came with a shot of vodka on the side! 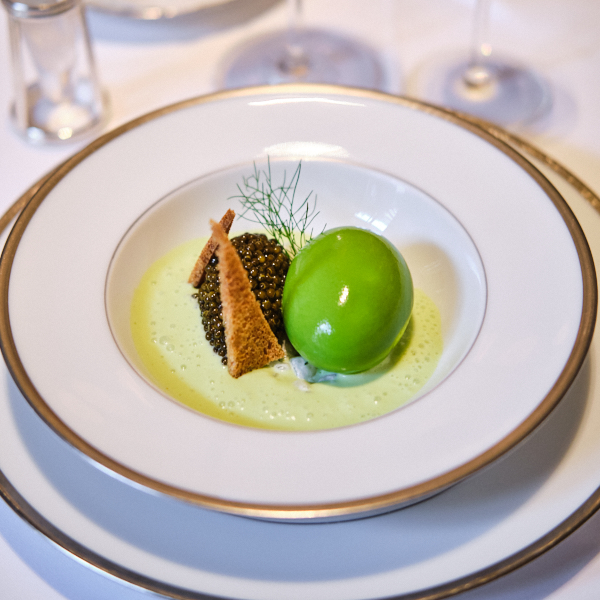 Feuillantine de langoustines aux graines de sésame, sauce au curry (€120) - J had the signature Langoustine with sesame feuilletine and curry sauce as his starter. The sauce was exceptional and well-balanced with a light curry flavor so as not to overpower the langoustine - this was my favorite of the two starters. 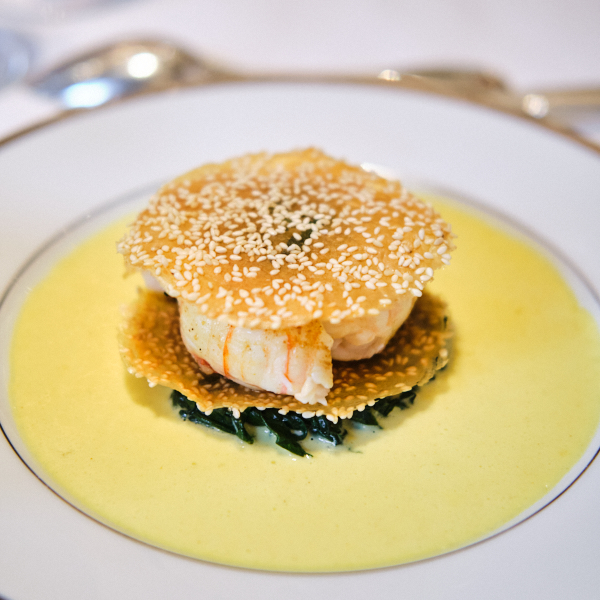 Escalopines de bar à l'émincé d'artichaut, caviar Kristal (€170) - For main, J had the renowned Sea Bass with artichoke and Kristal caviar. The sea bass was stunning to look at with a sea of caviar around it; the fish, however, had a tinge of metallic taste which unfortunately detracted from the dish. The sauce with the caviar though was superb.

Interlude de homard aux pousses de légumes, nage à l'anis étoilé (€150) - I had the Lobster with star anise and vegetable shoots as my main course. The lobster was beautifully cooked of course but again it was the glorious buttery sauce that stood out to me. 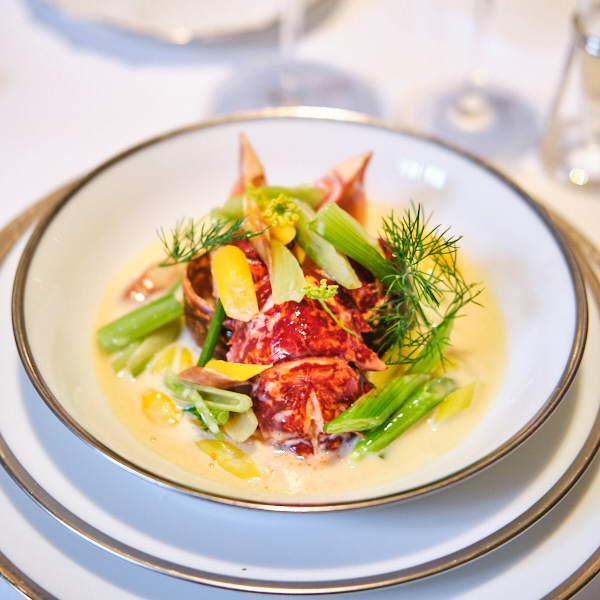 Before our desserts, we had a palate cleanser which was a lovely white cheese sorbet. 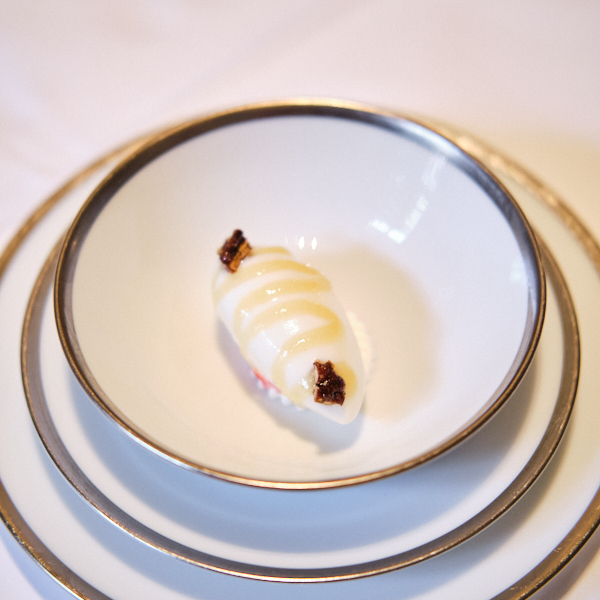 Tarte fine sablée au cacao amer, crème glacée à la vanille Bourbon (€38) - the must-try dessert here has got to be the famous Chocolate Tart with bourbon vanilla ice cream! If you’re from HK, you may have tried Daniel Calvert’s version at Belon which was based on L’Ambroisie’s recipe. Daniel’s version was very good of course but the chocolate sabayon here was even fluffier and lighter - simply amazing! I can eat this everyday! 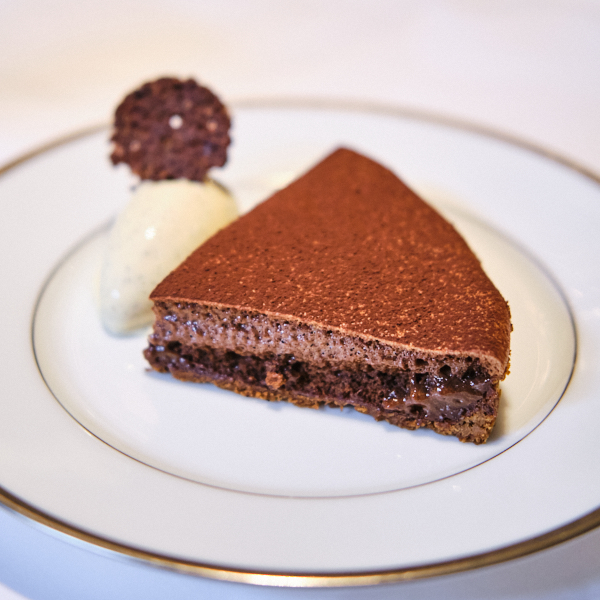 Soupe de pêches au côte de nuits, glace à la verveine, pain de Gênes (€38) - the other dessert we tried was a chilled Peach Soup with verbena ice cream. As you can imagine, this was perfect as a summer seasonal dish as it was super refreshing. 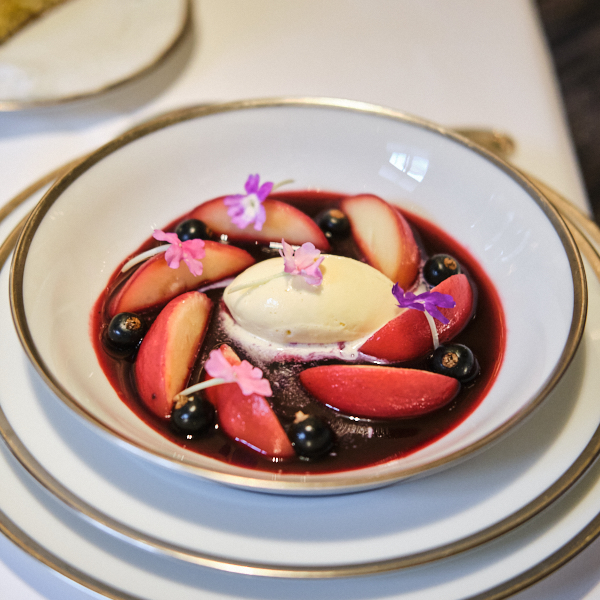 The staff also surprised J with an almond cake for his birthday! 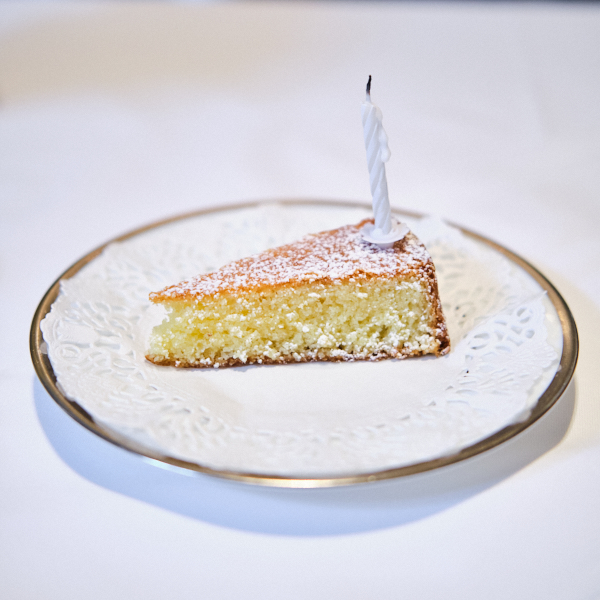 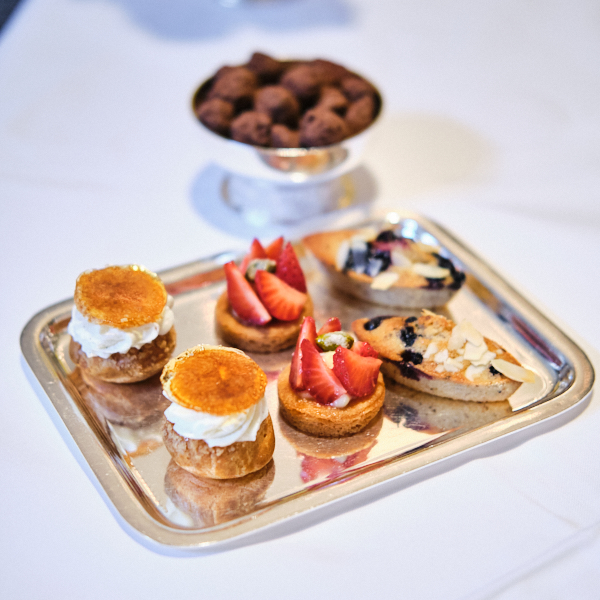 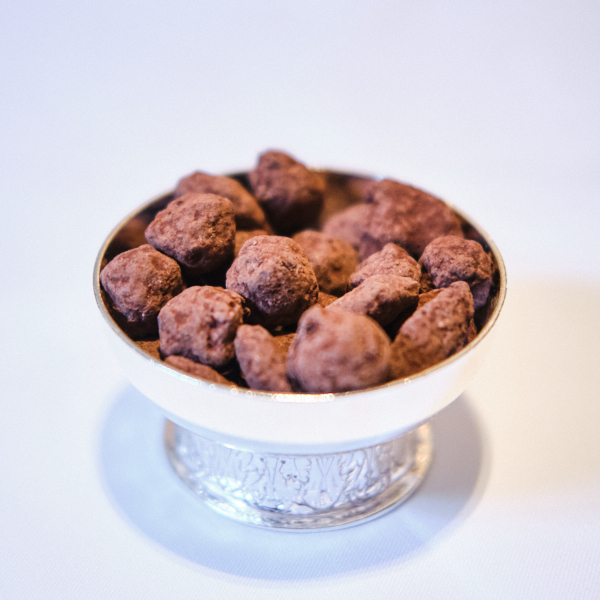