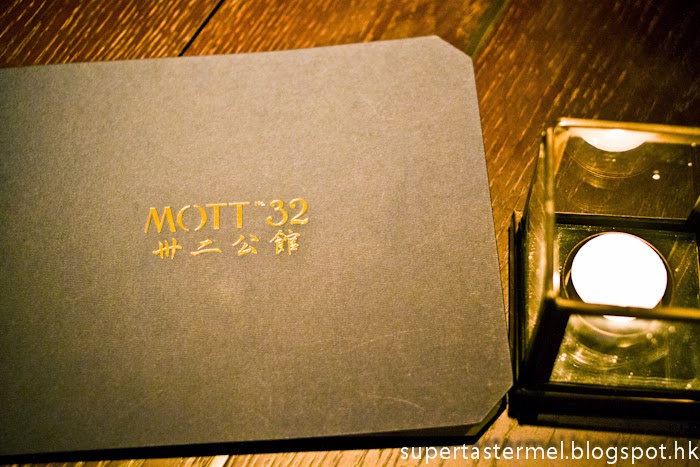 Everyone around me has been buzzing about the newest restaurant by Maximal Concept, the same group that brings us Blue Butcher, Fish & Meat, Brickhouse, etc. Named after Mott Street in Manhattan Chinatown, Mott 32 serves modern Chinese food with a focus on prime ingredients such as Iberico pork and Wagyu beef. In a collaboration with award winning designer Joyce Wang, the restaurant boasts 7,500 square foot with five private rooms - each with its own unique design.

Located in the Standard Charter building, the entrance was impressive from the start as we descended down a flight of stairs surrounded by mirrors on all sides, reminiscent of the Hall of Mirrors in Versailles. The lighting in the restaurant was really dark while the decor differed vastly depending on where you were seating. One area had elegant vases housing fresh fragrant flowers while another was surrounded by wooden dividers and cushion sofas. The overall theme looked like industrial chic though with lots of metal structural elements and graffiti on the concrete walls. 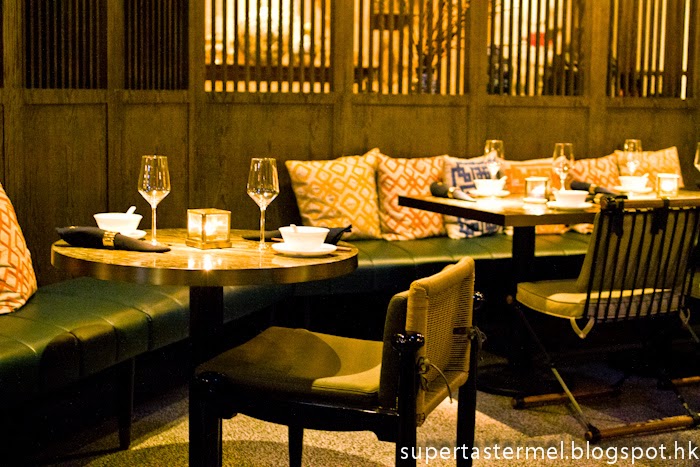 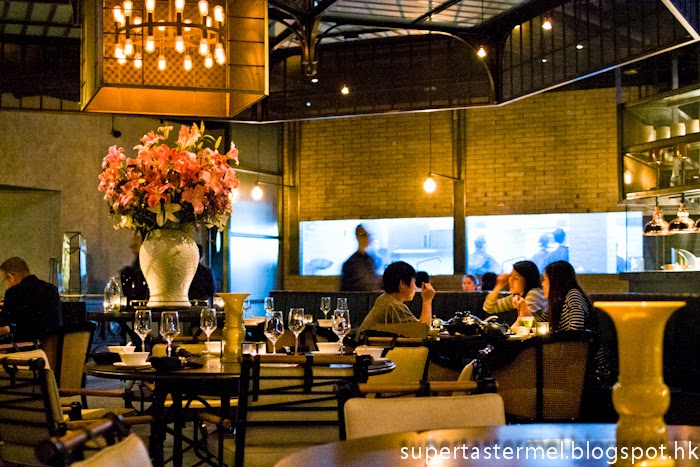 I came here during the soft opening for a friend's birthday dinner and since there were 8 of us, we ordered many dishes to share including the Peking duck, which had to be pre-ordered ahead of time. As the first round of cocktails was complimentary during the soft opening, we all started the night with that! I ordered the Five Points Perry ($120) with rum, cognac, pear and lemon. I found the drink to be a bit strong while there was no pear flavor - much to my disappointment. My friends also tried the Anna Wong  and The Milk Tram, and the general consensus was that the drinks were all pretty strong (at least for us girls anyways). 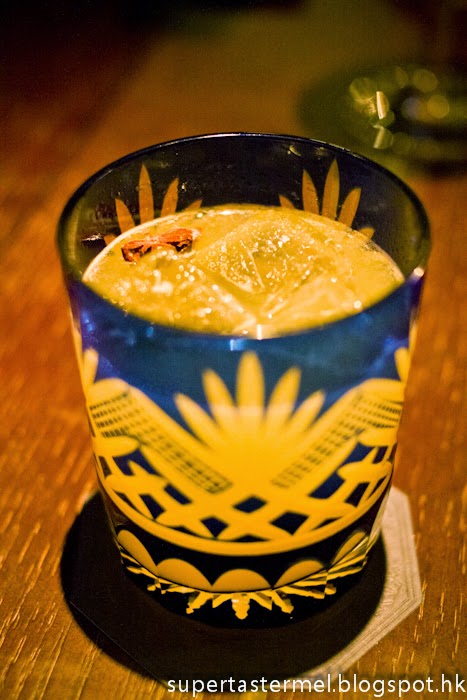 Our starters came out first, starting with the Deep Fried Diced Cod Fillet ($165) prepared "typhoon shelter" style with golden garlic and spiced salt. While the cod was soft and flavorful, I felt that the flavors could have been even spicier. [4/5] 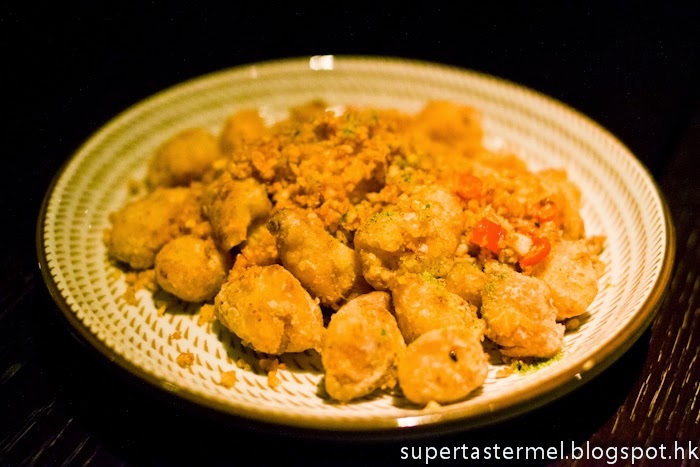 We were all looking forward to the Barbecue Prime Iberico Pork with Yellow Mountain Honey ($295), and it did not disappoint! The pork was very tender and succulent while the honey glaze was delectably sweet! The portion was tiny though for the hefty price, and I'm not sure if it was really worth 3-4 times the premium over Lei Garden or Fu Sing which produces quality char siu as well. [5/5] 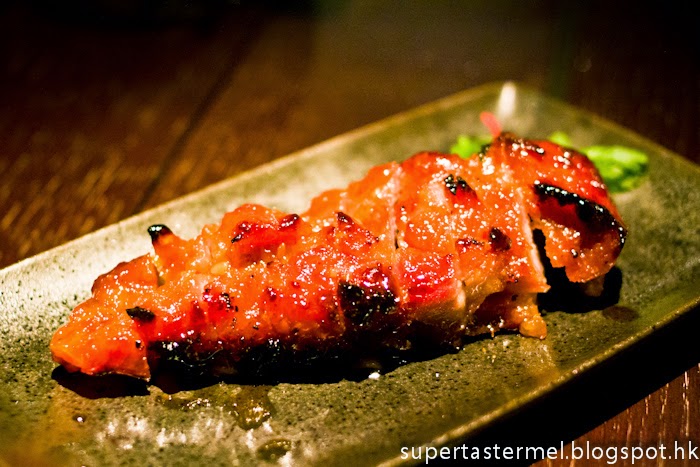 The Cold Free Range Chicken with Szechuan Pepper & Chili Sauce ($155) was another impressive dish as the chicken was tender and luscious while the dish was deliriously spicy! [5/5] 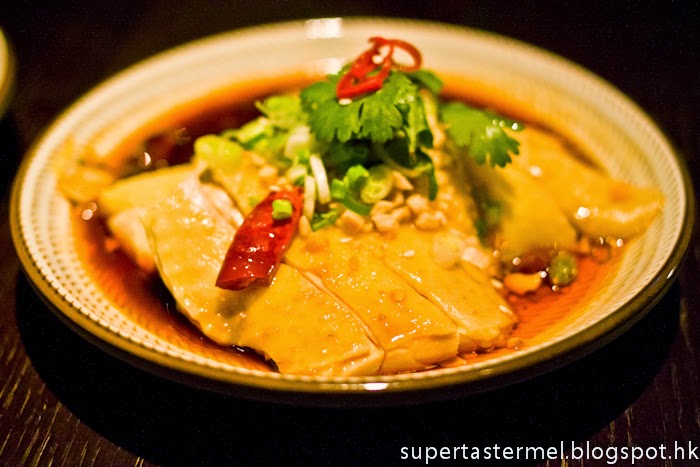 The Marinated Jellyfish & Cucumber with Aged Balsamic Vinegar ($180) was appetizing and refreshing to eat - especially the jellyfish with its crunchy and snappy texture. [4/5] 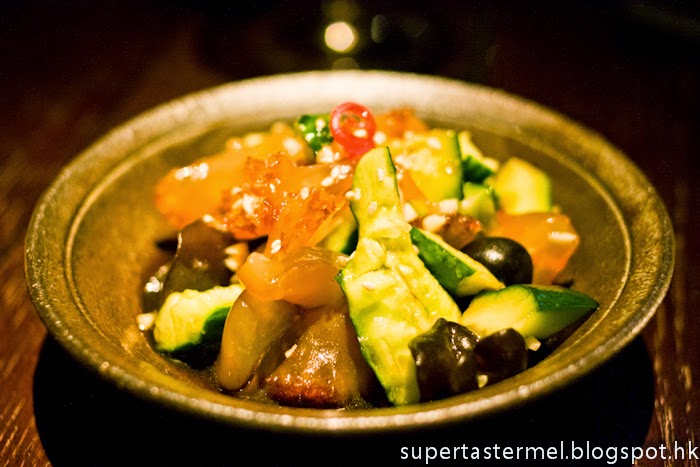 At this point, the star of the night came out as the whole Apple Wood Roasted Peking Duck ($580) was showcased to us before being carved alongside our table. As we waited anxiously for our duck, sauces were brought out with instructions on the pairing of the sauces with different parts of the duck. [4/5] 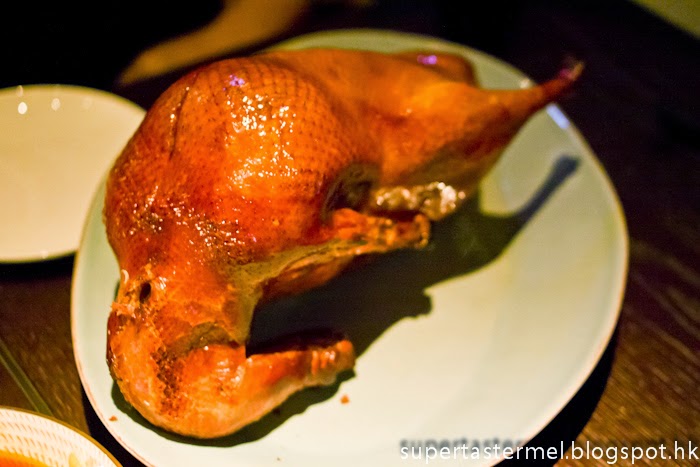 First, the crispy duck skin was paired with fine sugar. 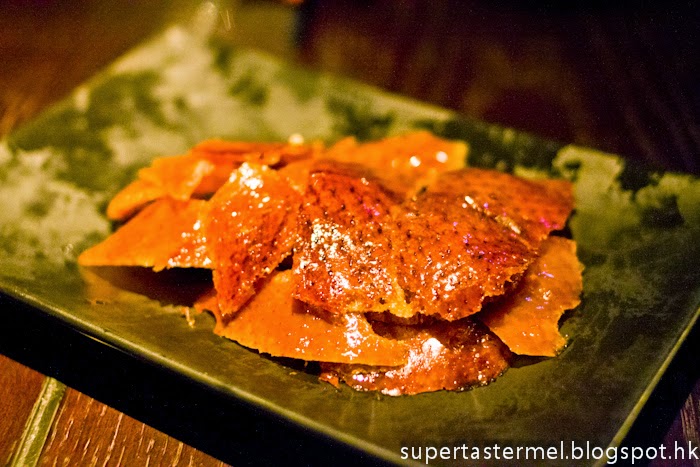 The inner duck meat was paired with a garlic sauce. 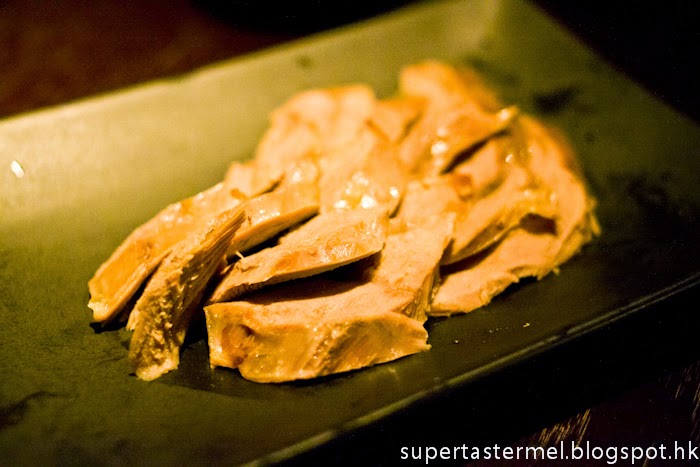 Finally, the best part of the duck with both skin and meat was paired traditionally with hoisin sauce and steamed pancakes. The duck was very delicious and not oily at all, so it was hard to stop eating it! We wondered what happened to the rest of our duck though. Usually the duck carcass is re-used in another dish, but we never saw our duck again. 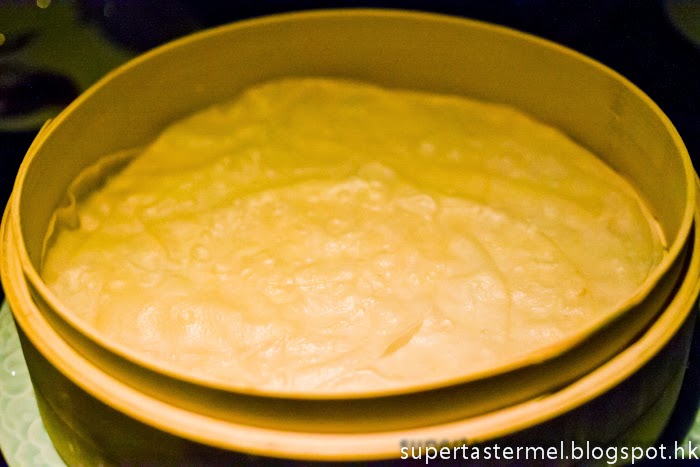 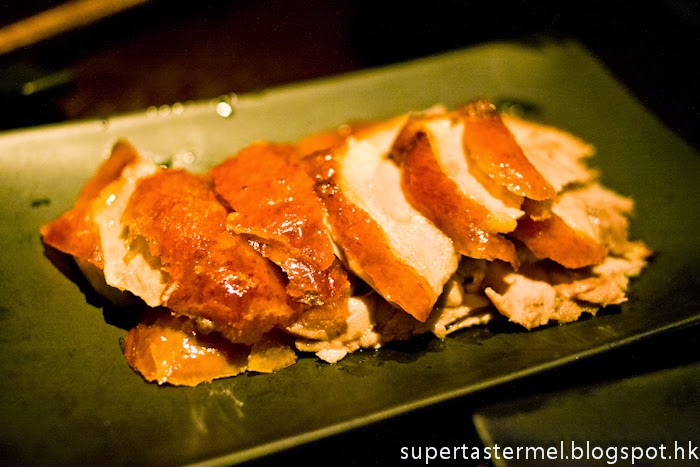 The Aged Black Vinegar Sweet & Sour Pork ($180) was scrumptious with its tender pork and vinegar glaze that was perfectly balanced in flavor. Dragon fruit was used in lieu of pineapples, which went surprisingly well with the pork. If only the pork was crispier on the outside, this would have been one perfect dish! [4/5] 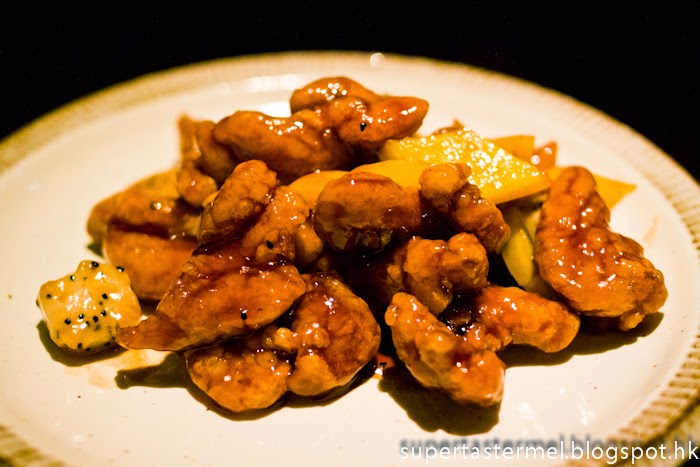 The Steamed Eggplant with Preserved Vegetable ($120) was less flavorful than I'd thought it would be. There was no sauce with the eggplants while the preserved vegetables didn't have much flavor either. [3/5] 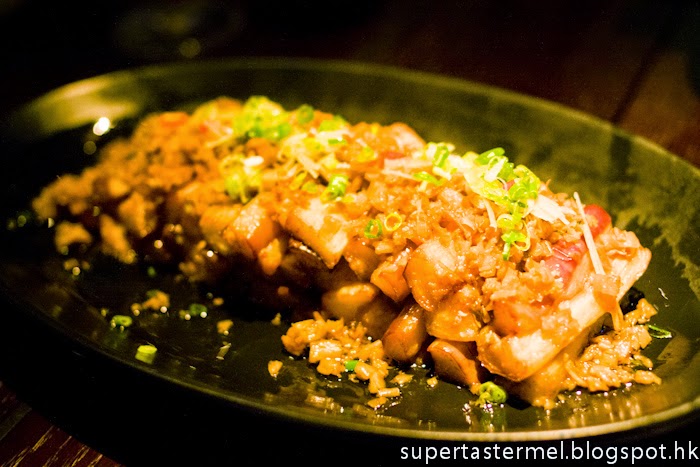 The Clay Pot with Black Cod ($220) arrived sizzling and unleashed an appetizing aroma as the lid was removed. While the fish was nicely cooked, the flavors were just average and not really memorable. [3.5/5] 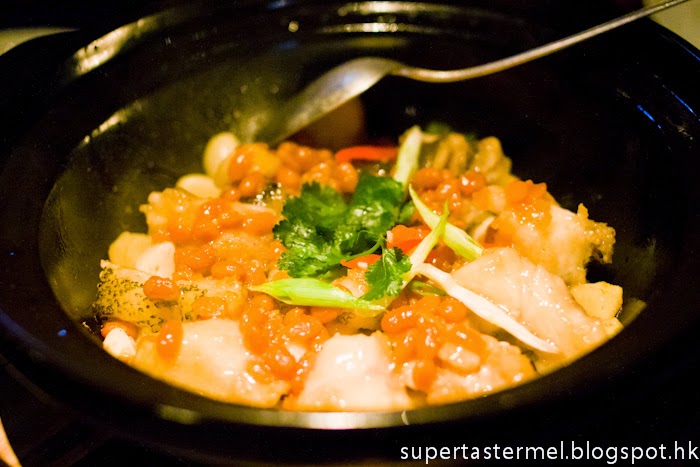 The Casserole of Baby Napa Cabbage and Pork Belly ($140) was a simple dish that was solid and packed with subtle flavors. [4/5] 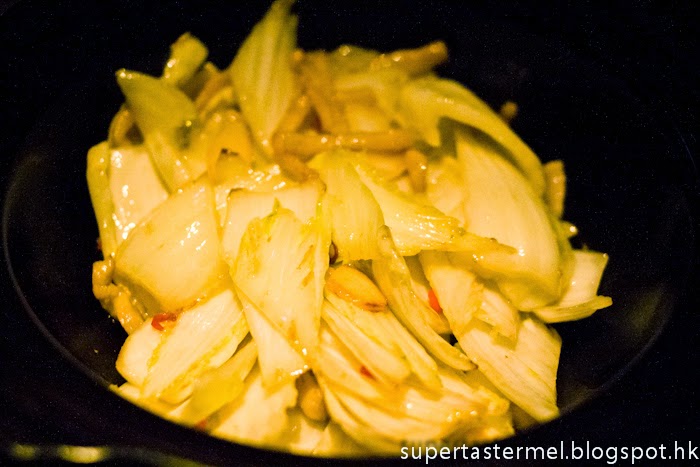 Finally, we ended the night with Fried Rice with Crabmeat, Conpoy & Egg White ($230) which was split into separate bowls for us. The fried rice was impressive as the texture was perfect with each grain of rice separated. It was full of flavors and one of the more noteworthy dishes of the night. [5/5] 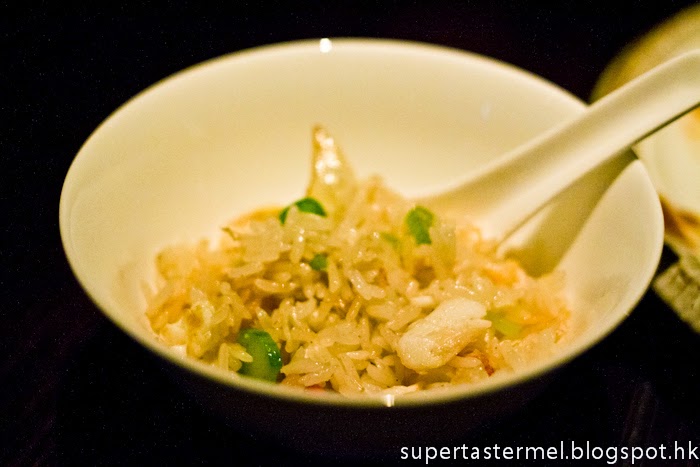 Verdict - our tab came out to about $500 per person excluding drinks and dessert since we had brought our own birthday cake, which wasn't too bad except I didn't feel that full given the rather small portions. No doubt the quality of the food at Mott 32 is high but the main question is if the premium prices are actually worth it. I guess if you've got the money to spare and you want to eat Chinese food in a hip and trendy New York style setting, I'd say go for it and give it a try!