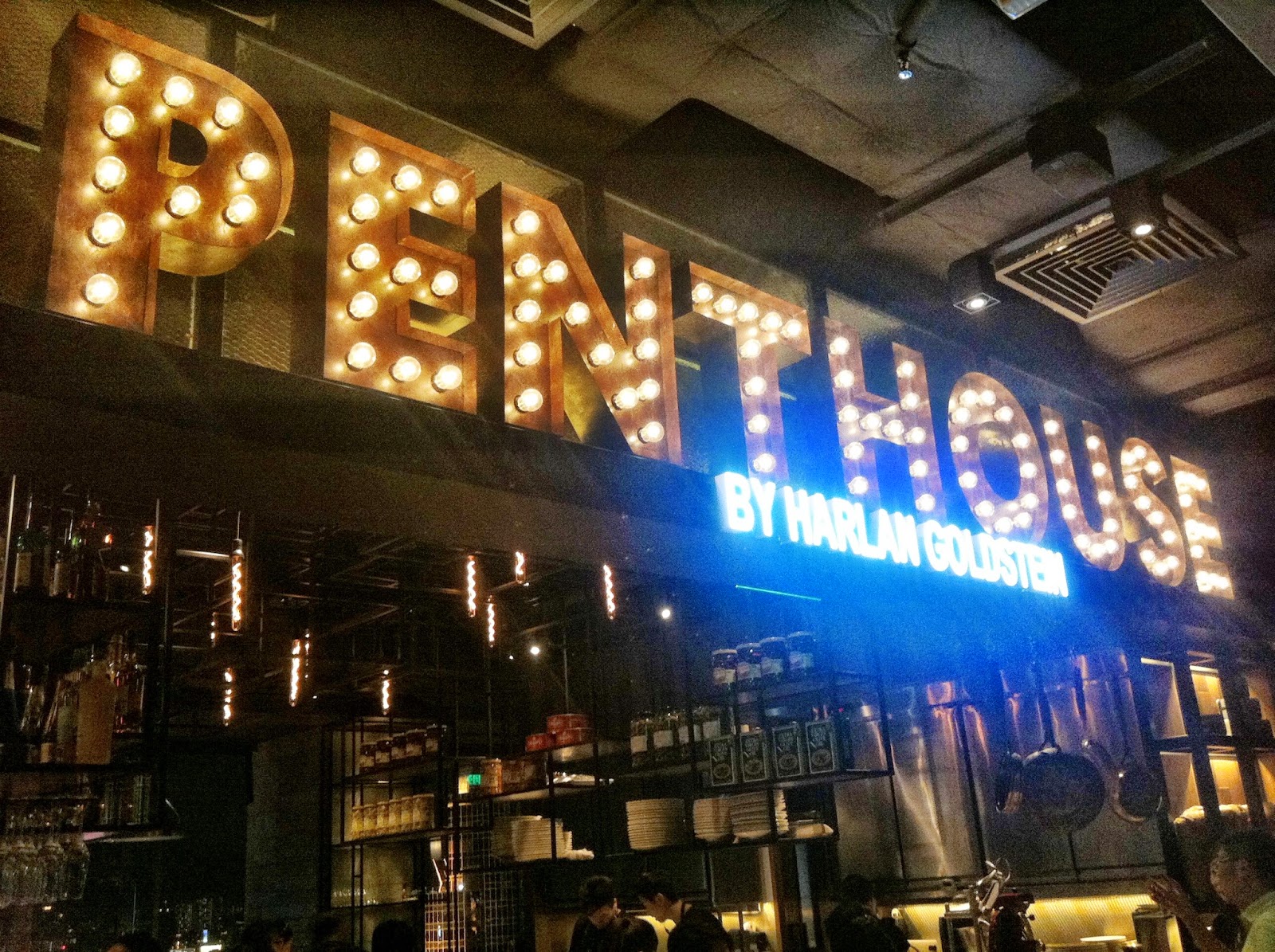 I've never been to any of Harlan Goldstein's restaurants before so I wasn't expecting much when one of my friends organized a dinner at his latest restaurant Penthouse on top of the new and hip Midtown building in Causeway Bay. My friend said that the restaurant has been booked out for the past couple of weekends and it was packed when we were there on Saturday night. The decor was pretty casual with seats at the bar and simple wooden furniture but the eye-catching view of the harbor through its large windows all around was the main focal point of the restaurant. Most of the dishes were great for sharing and since we had 6 people, we just ordered a bunch of starters, pastas and mains to share! 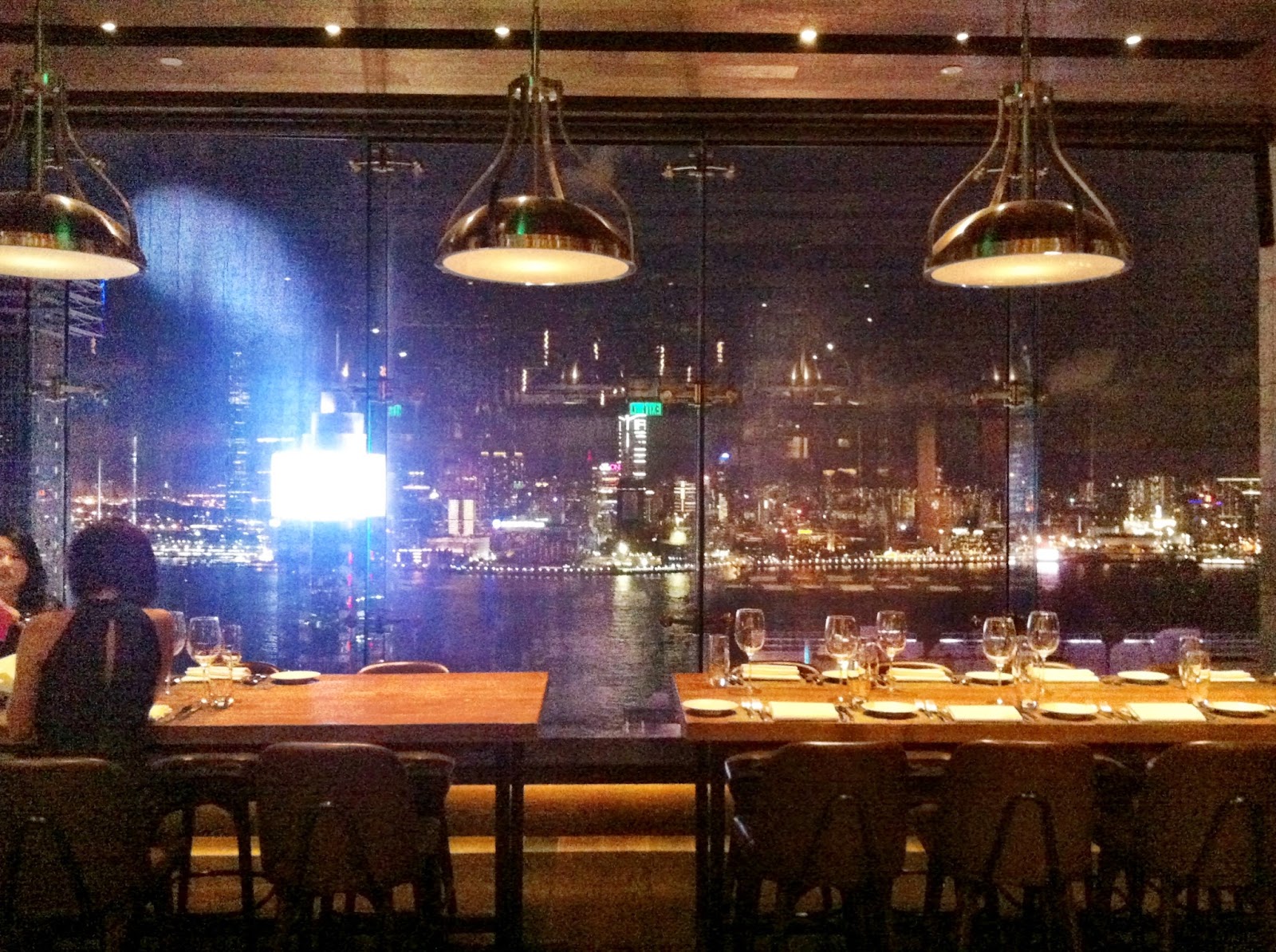 I wasn't going to take picture of the bread at first since most restaurants in Hong Kong do not serve really good bread anyways but I changed my mind after I had a bite of the ciabatta with the pesto sauce! The crust was crispy with a soft and open texture on the inside while I loved the sauce was surprisingly tasty. It was fresh and tangy which made the bread all the more refreshing to eat. 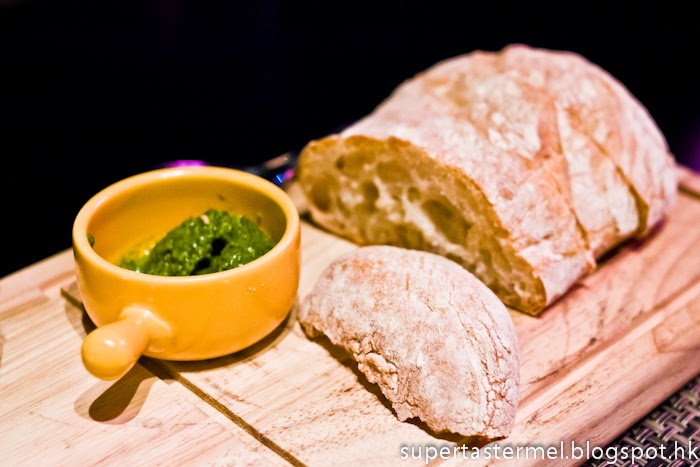 Grilled Italian Baby Squid ($178) - we were impressed from the start with this appetizer as the baby squid had been grilled to perfection. They were so soft and tender while the accompanying chorizo, haricot beans, and saffron aioli all came together very well. So good we ended up ordering another one! (5/5) 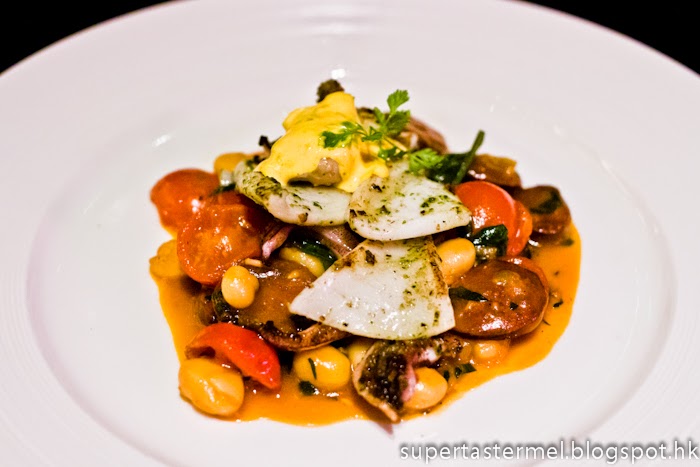 Scottish Salmon Carpaccio ($158) - the texture of the salmon was amazing as it was very tender but still firm at the same time. It went quite well with the Mediterranean salsa and lemon basil dressing as the flavor of the salmon still managed to stand out. (4.5/5) 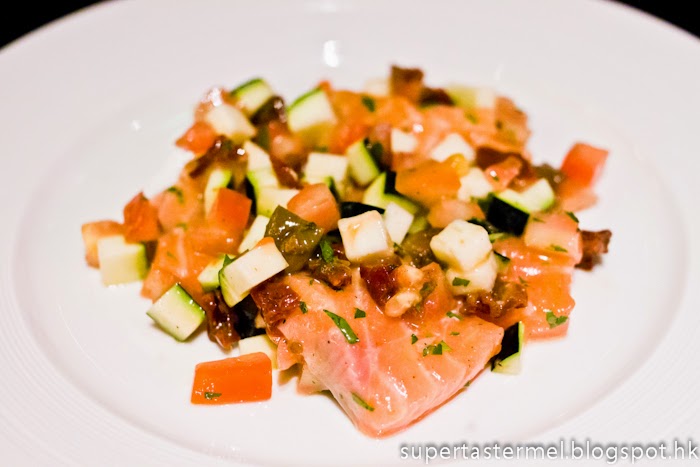 Spanish Farm-Raised Bluefin Tuna Tartare ($208) - topped with a slow-cooked egg and anchovy, the tuna tartare was delightfully fresh and flavorful especially after the yolk had been mixed in. I wasn't sure about the placement of the single anchovy though as it just ended up being brushed aside by my friends when they were going for the tuna. Perhaps it should be more chopped up? (4.5/5) 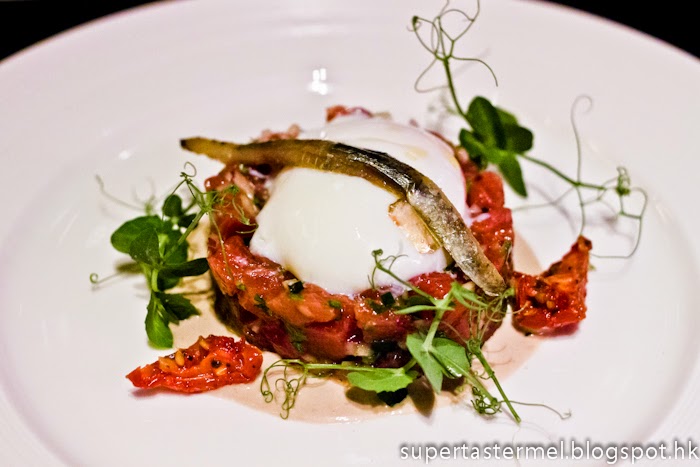 Harlan G's Deviled Crab Cake ($198) - as I was cutting into the crab cake, I was surprised to see big chunks of crab meat inside! The texture of the crab cake was a bit softer than expected. I loved the little droplets of mango and salted black bean salsa though and only wished there were more of it. (4/5) 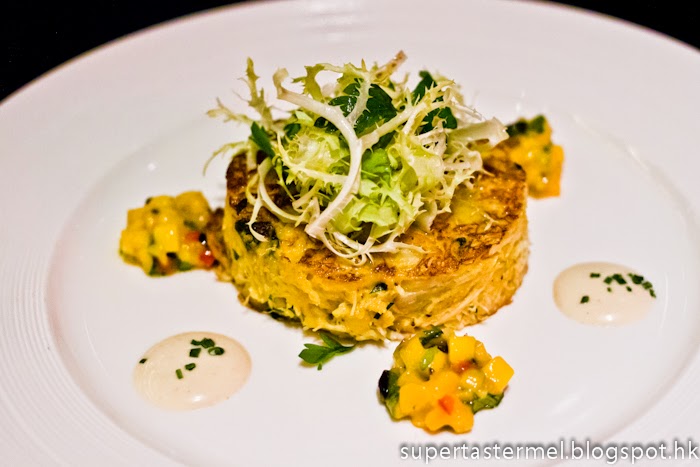 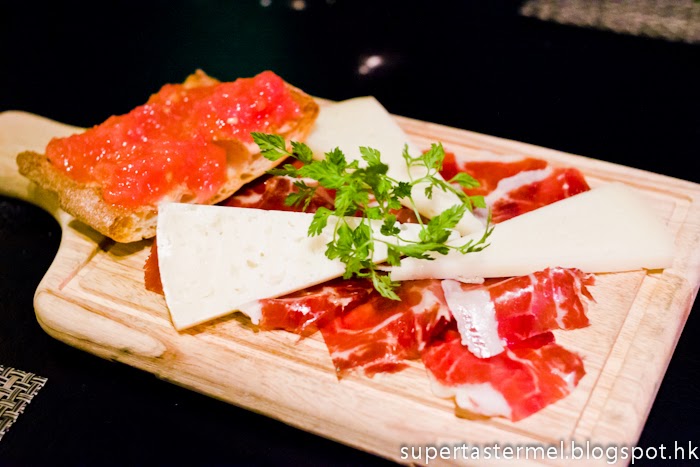 Black Ink Bomba Rice ($288) - there were 3 kinds of stone-pot paella to choose from and we ended up choosing the black ink Bomba rice with sea scallops and crispy baby squid. When I think of paella, I expect big portions so I guess this is a smaller version of that. There were a lot of scallops and squid though which were both delicious to eat. The rice could have been more flavorful though. (4/5) 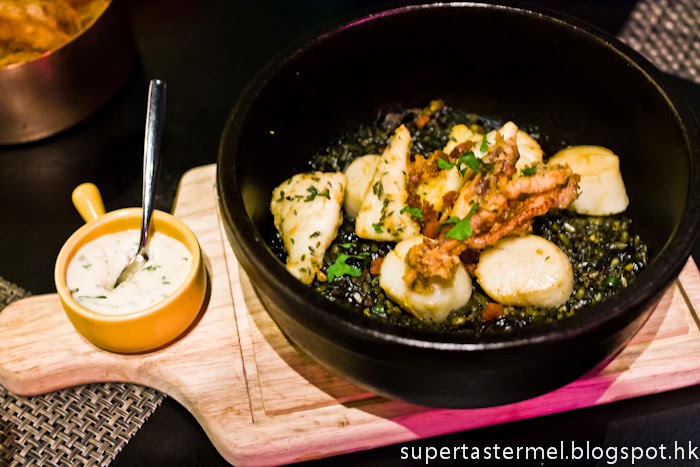 Hokkaido King Crab Ravioli, Tomato Basil Sugo ($388) - this was easily the most disappointing dish of the night. For the high price, we were given 3 pieces of ravioli but the crab filling was not as fresh and sweet as expected and broke apart easily. The tomato basil sauce was also just average and not memorable as well. (3/5) 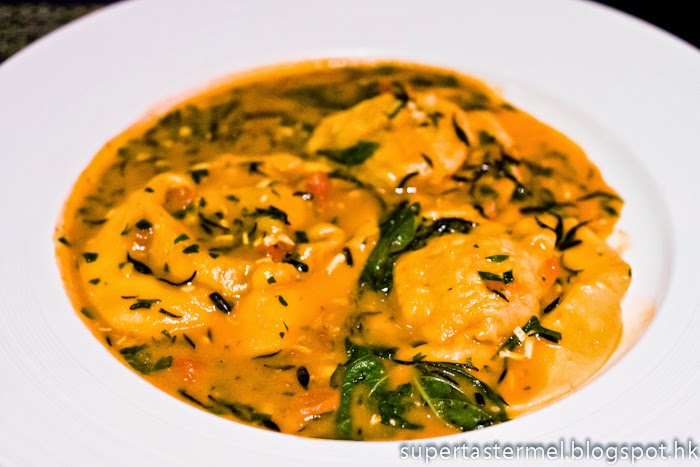 Italian Egg Pappardelle ($248) - the pappardelle fared much better than the ravioli. The texture of the pasta was just right while the Spanish pork ragout and herb mascapone were terrific with the pappardelle. (4/5) 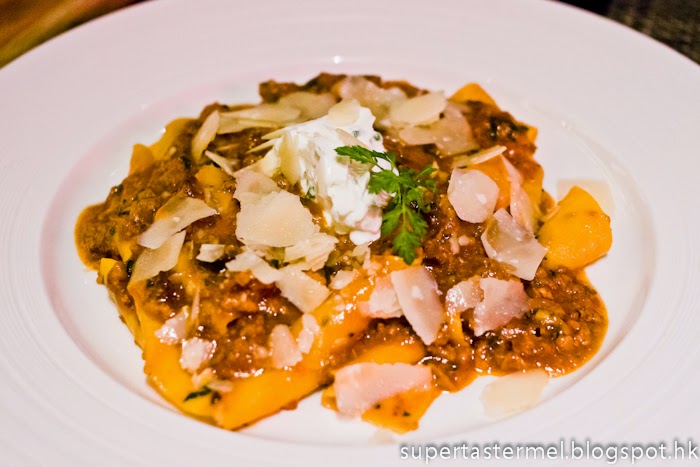 Spanish Duroc Pork Ribs ($358) - hands down this was the best dish of the night! The pork ribs had been slow-cooked and then grilled at 500 degrees to get crispy and juicy. The meat was super tender and broke away easily from the bones, but what made the dish was the balsamic vinegar sauce that came with the ribs! The tart and tangy flavors of the sauce complimented the ribs perfectly. So finger-licking delicious! (5/5) 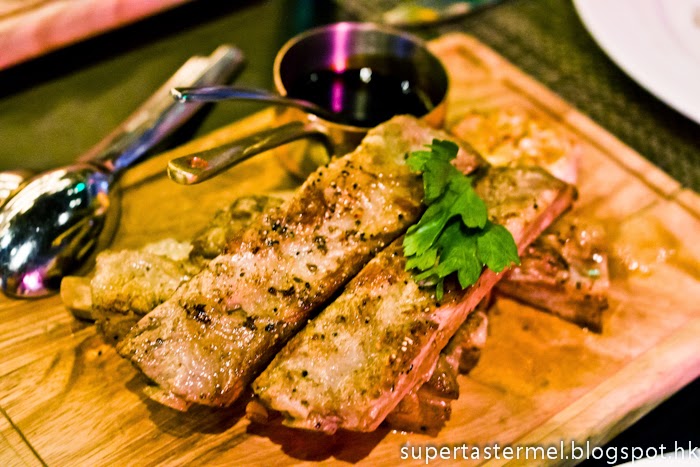 Australian Grain-Fed Yellow Chicken for 2 ($428) - another must-have dish here! Marinated with garlic, herbs, sea salt, lemon and black pepper, the chicken was amazingly tender and succulent while full of flavor. Even the white meat portion that is typically bland and dry was just as tender as the red meat. This dish is meant for sharing but I wouldn't blame anyone for hogging this all to themselves. (5/5) 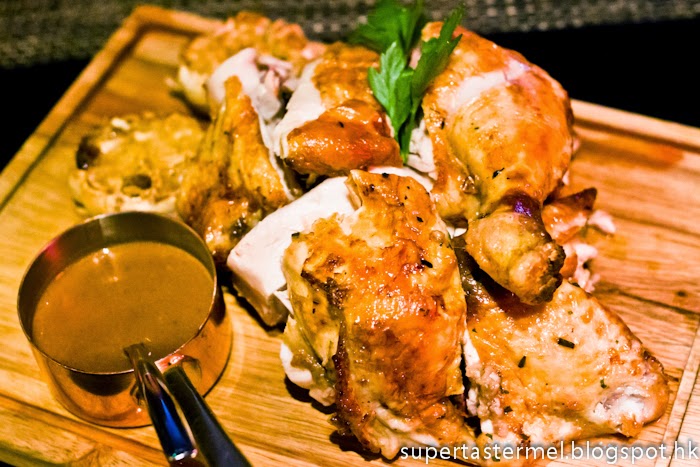 Verdict - I was impressed with many of the dishes we tried especially the pork ribs and chicken that were cooked using the Josper - a Spanish grill and oven that can heat up to 500 degrees. The prices are not cheap and the portions can be rather small but I think Penthouse is great for big groups to share and try many different dishes!