[San Francisco] Saison - Is the 2nd Most Expensive Restaurant in U.S. Worth the Money?

The 3 Michelin starred Saison has been on my list of restaurants to try in San Francisco but I hesitate due to the sky high price it is charging for its 16 course set menu currently at US$398 before taxes and the mandatory 20% service charge which makes it the second most expensive restaurant in the US after Masa (US$450) in NYC. I finally gave in since I've been curious about it and Saison had been voted the best restaurant in the US for 2 years in a row now by OAD, so I decided to book it for our anniversary dinner when we were in SF. It's more expensive than any of the Michelin starred restaurants I've been to in Europe and Asia so expectations are understandably high and to be honest - it better be worth the money! For the price, one would expect perfection and a life-changing experience even but sadly I don't think that Saison lived up to the expectations - at least not for me. I mean it was a great meal and I was impressed with the cooking and treatment of local ingredients but at the same time it wasn't mind blowing either and I've had better food and experience elsewhere for half the price.

Scoring a reservation was very easy since the restaurant had an online system that showed available time slots unlike French Laundry (*shakes fist*) so everything was taken care of through the web. When I arrived at Saison, I have to say that the space was not quite what I expected but in a good way. Located in a warehouse, the restaurant emitted a warm and casual vibe with an open kitchen, red brick walls and handcrafted wooden tables with no white linen tablecloths which in many ways broke away from the upscale and luxurious mold that one would expect at a fine dining eatery. The warm ambiance matches quite well with the fire element that is the one common theme throughout the many courses in our set menu. The service was still impeccable though and any mess that I made on the table was immediately cleaned up - plus we were given free glasses of Krug champagne for our anniversary celebration so we were off to a great start of our meal! 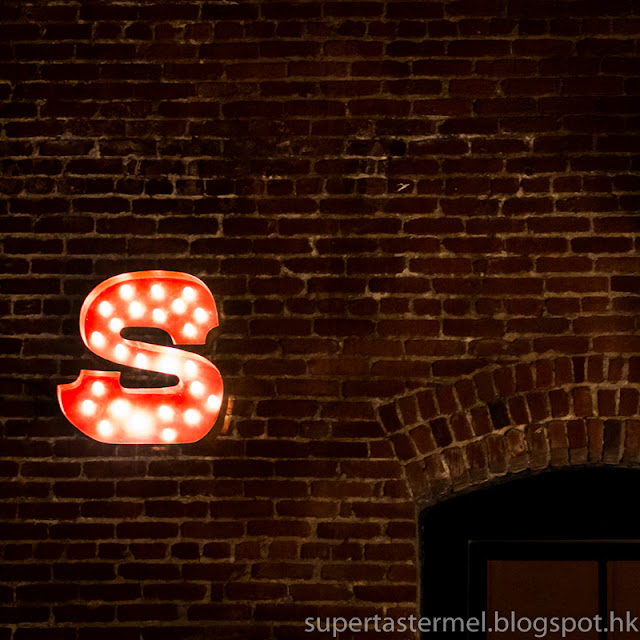 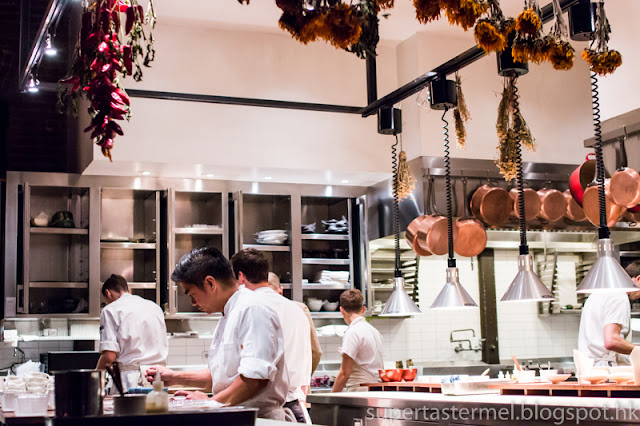 Saison means season in French which represents the kitchen's commitment to using the best ingredients that is available. We started with an infusion of fresh herbs straight from Saison's own garden which was served with lemon water. I loved the little bouquet of herbs floating in my cup and when I took a sip, a strong aroma of spring time took over my sense of smell. 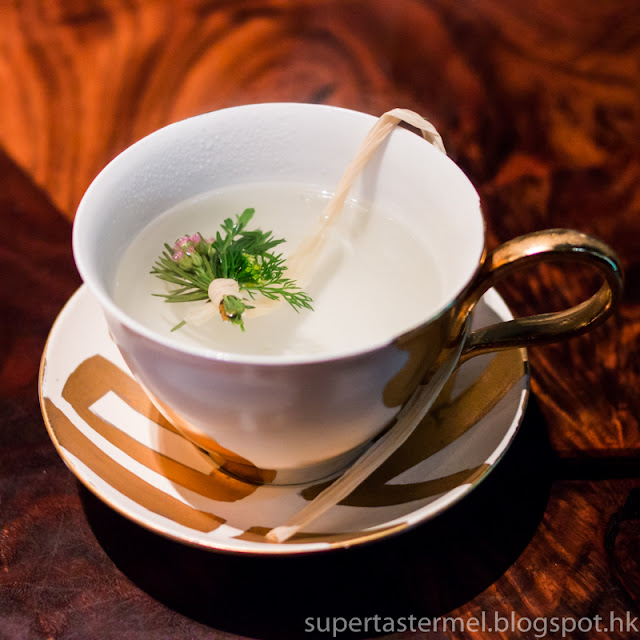 Our first course of food was this decadent Saison reserve caviar served with cheese, custard and toasted brioche bread. We were given quite a generous serving of caviar which was well-balanced in flavor by the sweet cheese and custard blend. The fluffy brioche was nice as well but it was more of an afterthought. 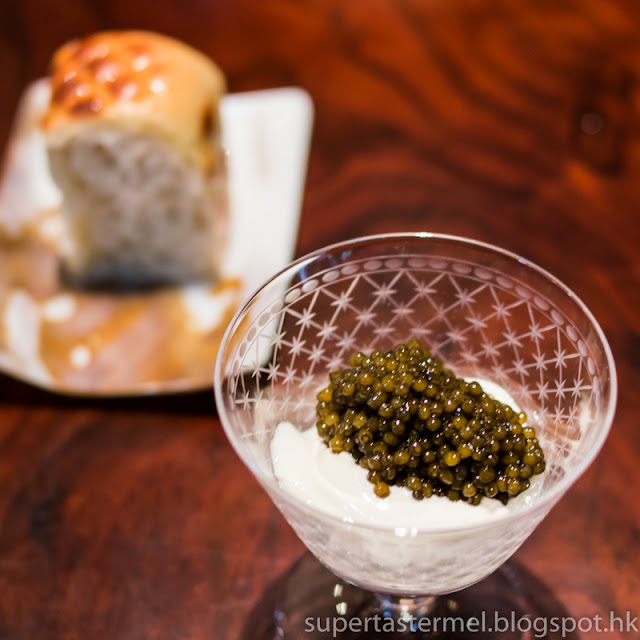 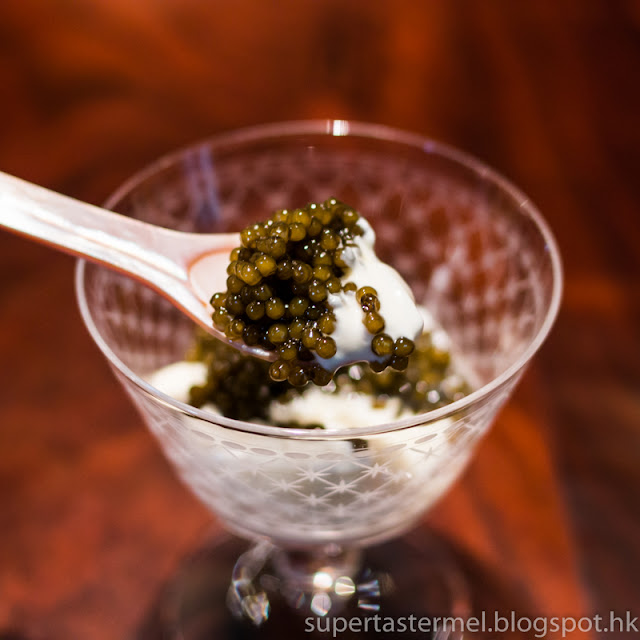 This had got to be the prettiest tomato that I've ever seen with corn pudding and consomme jelly plus some herbs (from their garden I assume) on top. 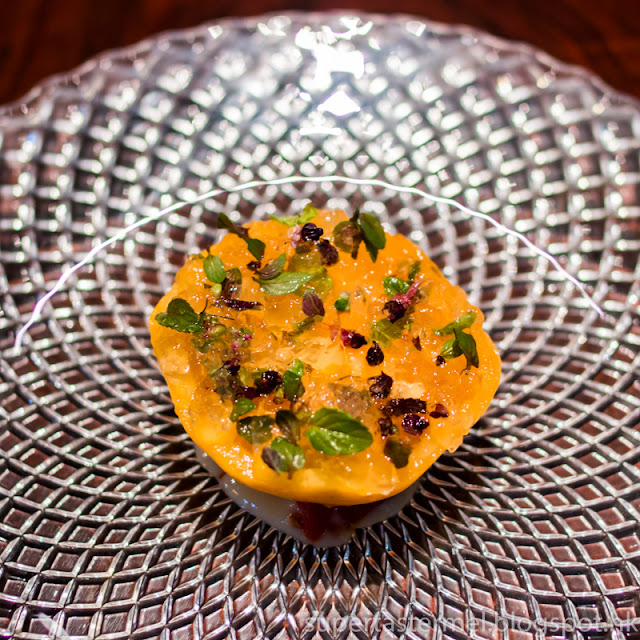 J was most impressed by this broth of grilled daikon with sea cucumber and scallop. The broth had a lot of umami flavors as it was sweet and yet spicy with hints of galanga taste. 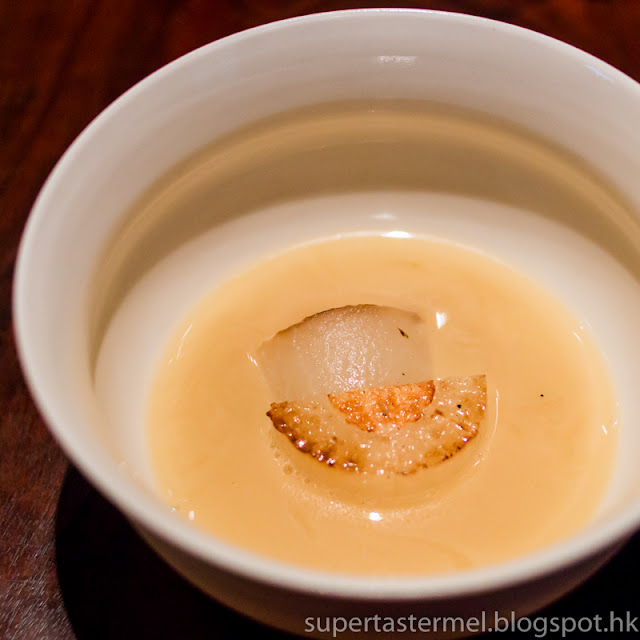 The smoked lobster which was served with vinegar sauce and seaweed salt was enjoyable as it was plump and sweet but the flavors didn't stand out for me and I wasn't sure what to make of the lettuce or the lump of grated daikon - was I supposed to mix that in with the sauce but nobody told me to do that. 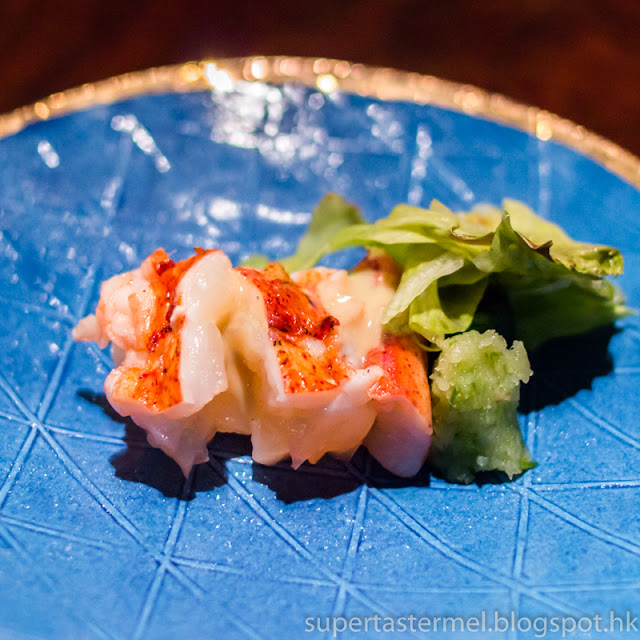 I loved this cured and smoked Battle Creek trout served with its crispy skin and juicy roe! It was so interesting to find the layer of roe sandwiched between the skin and fish whose firm texture was just perfection. 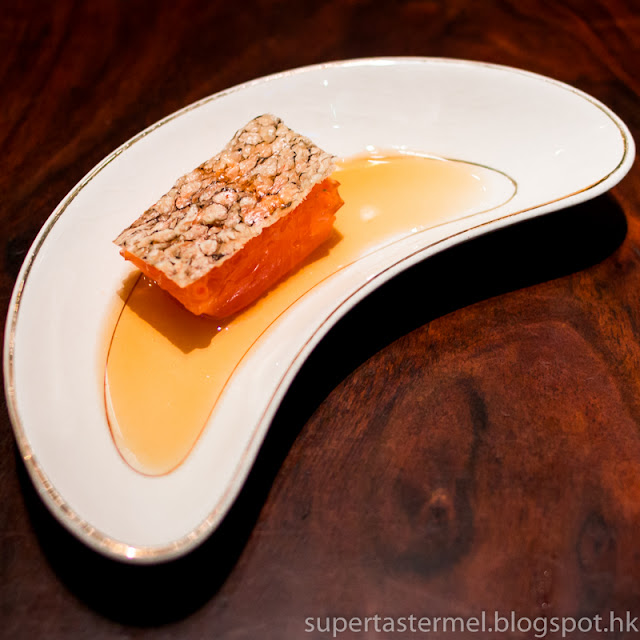 I was most excited to try the sensuous liquid uni toast with Santa Barbara sea urchin and toast soaked in brown butter and soy! It's an innovative twist using toast to replace rice in a nigiri and I know they insist on using local produce but this dish would have been much better if they had used uni from Japan instead. The uni is just not up to par with what we are used to in Japan and it had that fishy taste that I dislike as well. 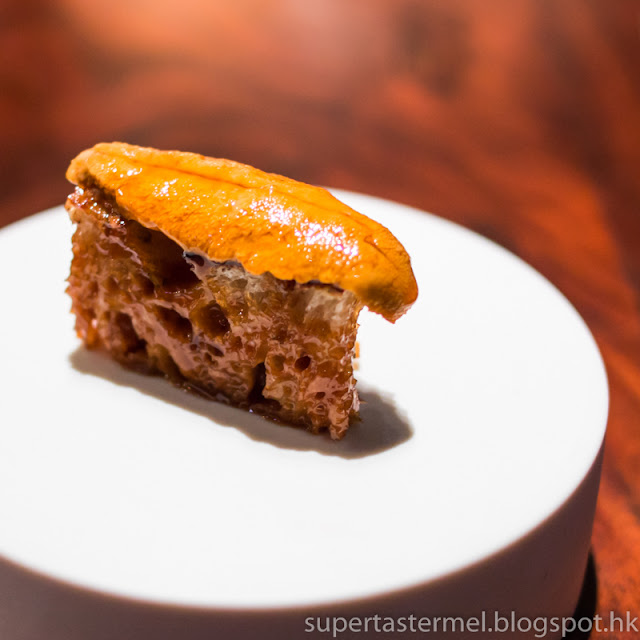 The grilled abalone was soft and tender and it came with rice and nori. Dig to the bottom of the bowl and you will find the rich sauce of abalone liver and capers which was nice to eat with the rice. It's a very Japanese dish in a way and yet the flavors were lacking a bit compared to abalone dishes I've had in Japan though. 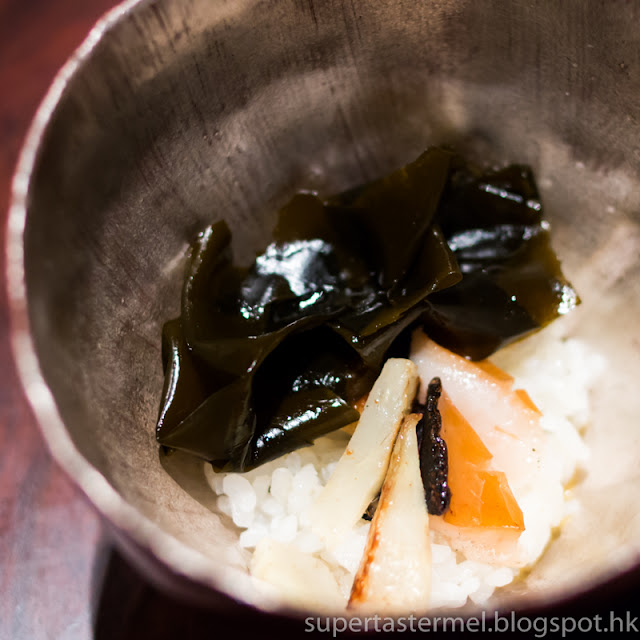 In the middle of the courses, we were served this palate cleanser with pickled cucumbers and a refreshing layer of horseradish crushed ice before moving on to our hot dishes of the night. 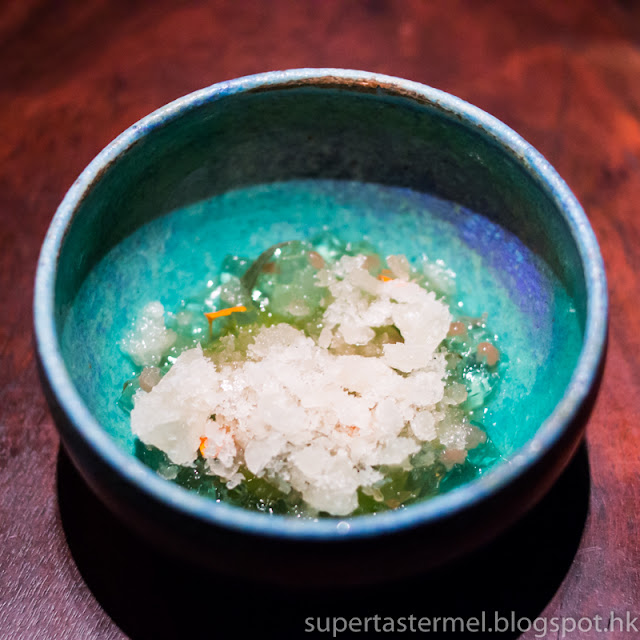 I loved the presentation of the grilled black cod served with sauce of spicy coconut milk and citrus leaves as it looked just like a lily pad pond. The skin was crispy which contrasted nicely with the soft and flaky texture of the cod. 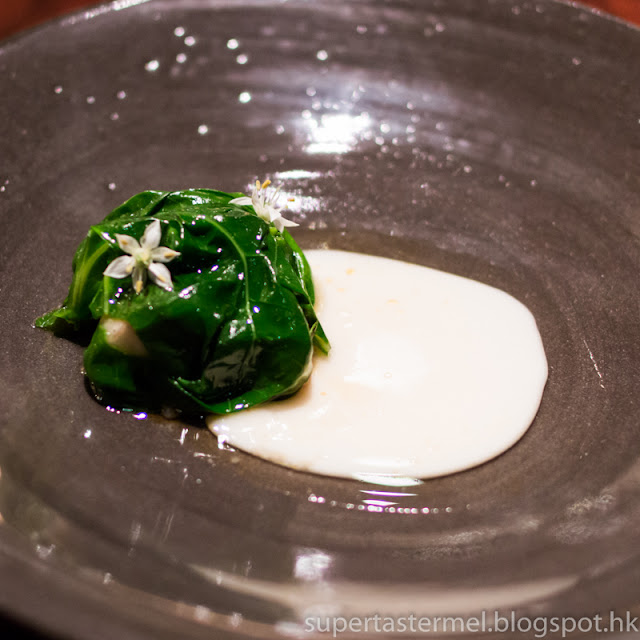 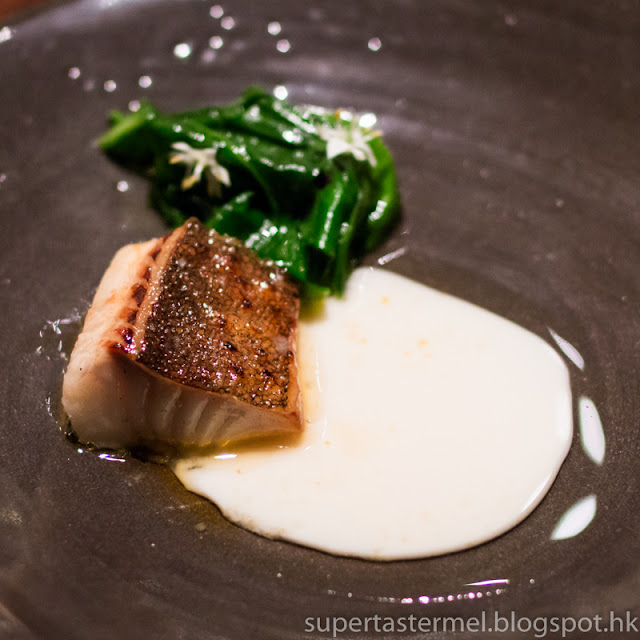 The roasted and crispy brassica leaves were served with a light broth of the cultured vegetables along with pickled vegetables and you can really taste the smokiness of the fire in this dish. 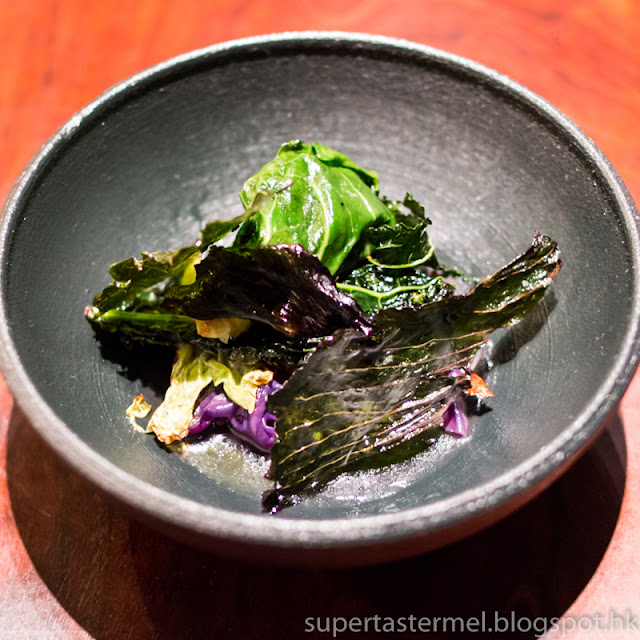 I was quite impressed with the elaborate efforts in preparing this fire in the sky beet with bone marrow and roasted over coals. The bone marrow was served straight from the bone at our table and a reduced beet sauce was poured on the spot. I've never seen so much focus on just beets before and the result was splendid. The beet was intensely sweet and juicy but we weren't sure if the bone marrow worked well here though. 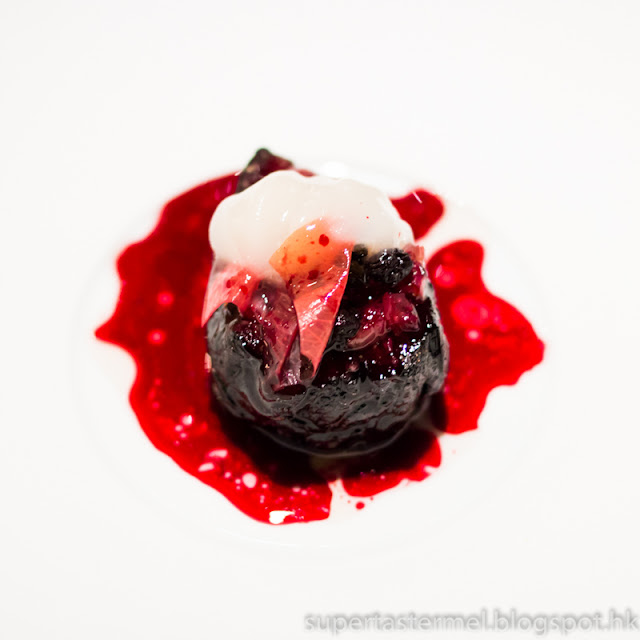 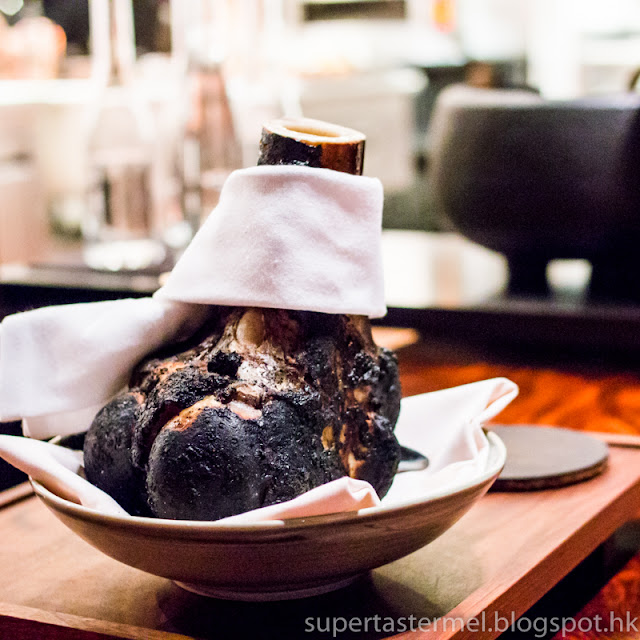 Finally we were served meat! I admired their bold choice of river goat which had been prepared with Saison hot spices that had been fermented for 12 weeks. The flavors were bold and spicy and while goat is not known for its tenderness, the meat we were served was surprisingly tender. 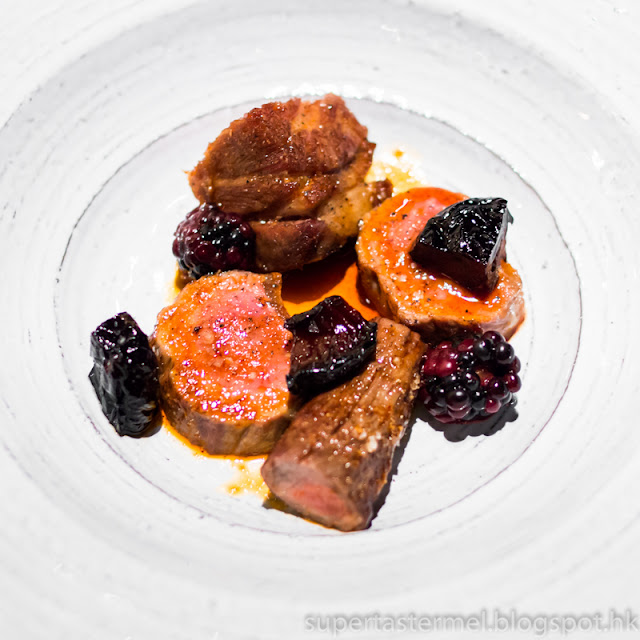 The second part of the goat dish was this bouillon made with the grilled bones and it was very goaty. It tasted very gamey and one of the only dishes of the night that I didn't want to finish (but I did anyways because I probably paid $20 for this). 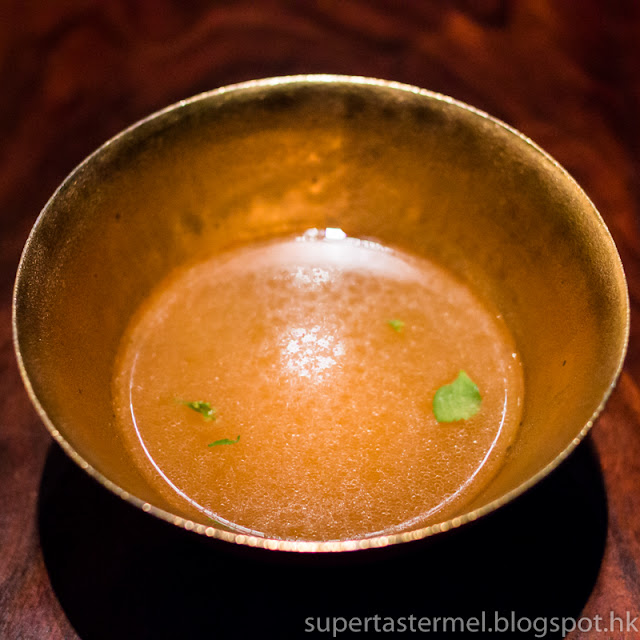 Moving onto desserts and the first was a smoked cow's milk ice cream with cocoa nibs and caramel. Great textures and flavors - what's not to love? 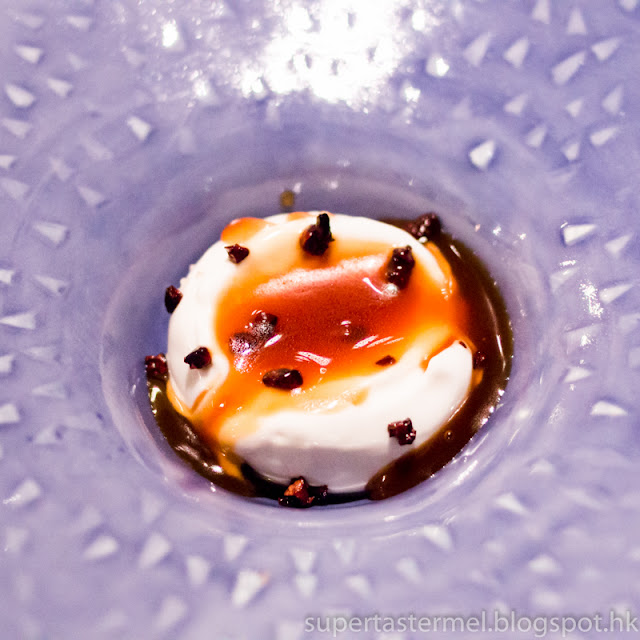 I also loved the buttermilk ice cream served in a citrus and going full circle, we were served buckwheat tea to match the tea that we had at the beginning of our meal. 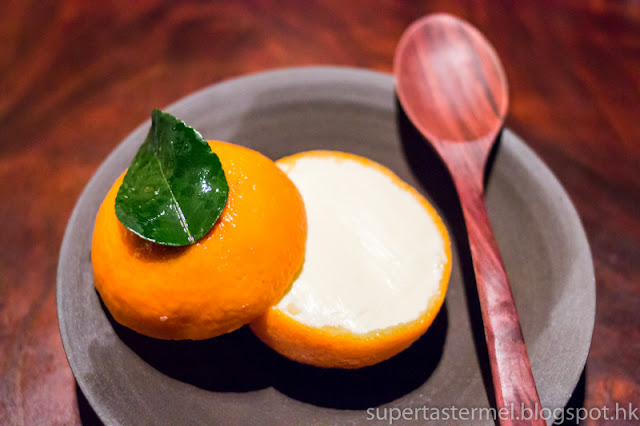 These baby strawberries were so cute with a coating of peppercorn syrup. I've never had wild berries like these before and what they lacked in size, they made up in flavors. I couldn't taste the peppercorn though but I loved the natural sweet and tart flavors of the berries. 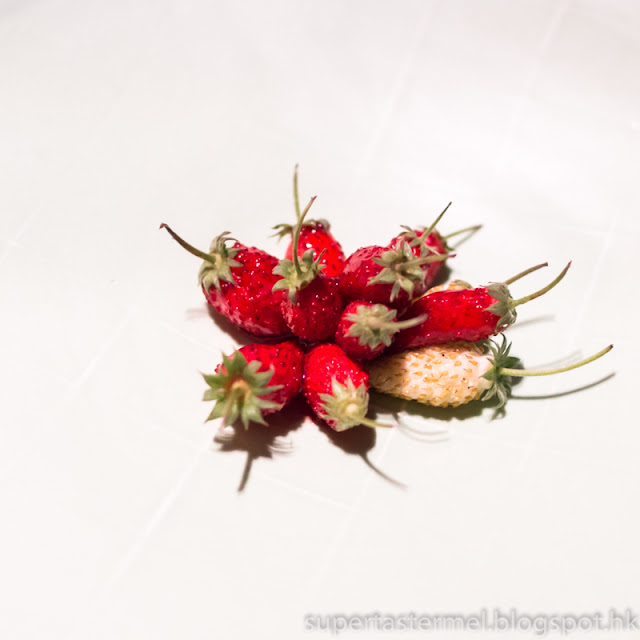 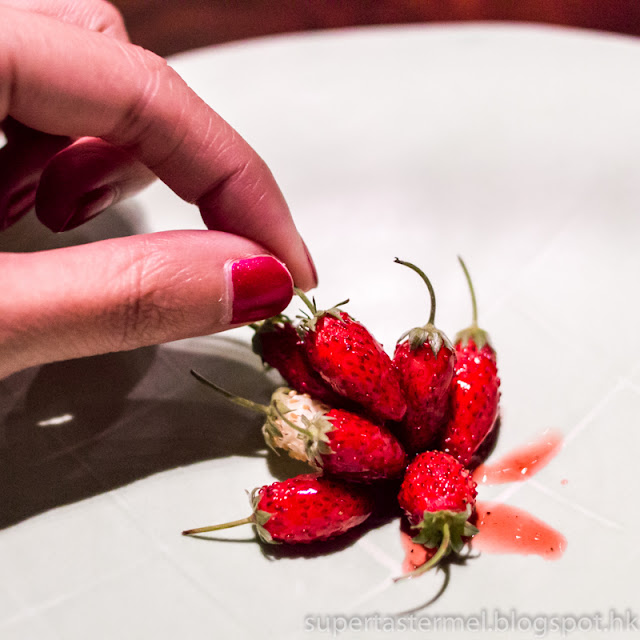 One last complimentary dessert for our celebration - a perfect blend of chocolate, hazelnut and caramel! 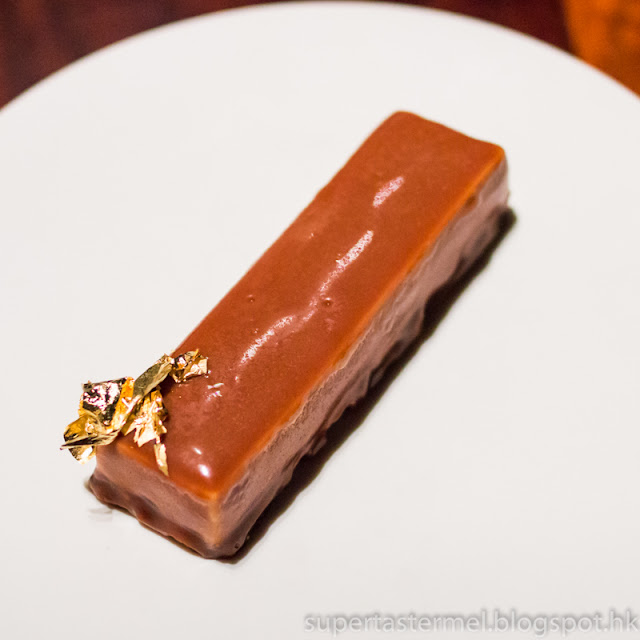 Finally we departed with a copy of the menu and a jar of dried tea leaves that I haven't tried yet but smelled amazing. 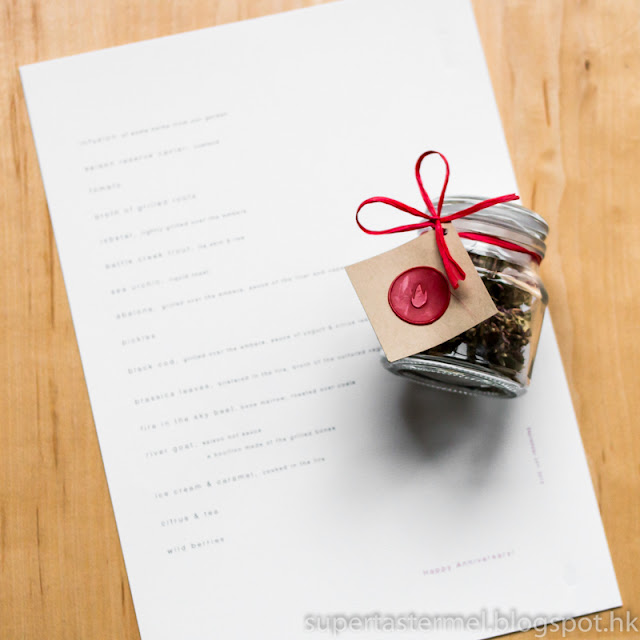 Verdict - like I said, it's not that I wasn't impressed with Saison and I think that the food for the most part was really good but just not at that price. It wasn't life changing for me and I wasn't wholly blown away either. It's a matter of expectations because of the high price tag and I think people will probably appreciate the experience a whole lot more if it just didn't cost so much. I can also see why people complain that they are still hungry afterwards because the portions are quite small and they only served one meat dish in the entire 16 course meal, but the menu evolves everyday so it depends on what the kitchen decides to serve on that day.