We went back to Catalunya for their fabulous Sunday brunch to celebrate my birthday this year! Luckily they were opened during Chinese New Year and we arrived around noon which is when brunch starts. I love the dark and rustic decor at this restaurant as it gives off a hip and casual vibe. 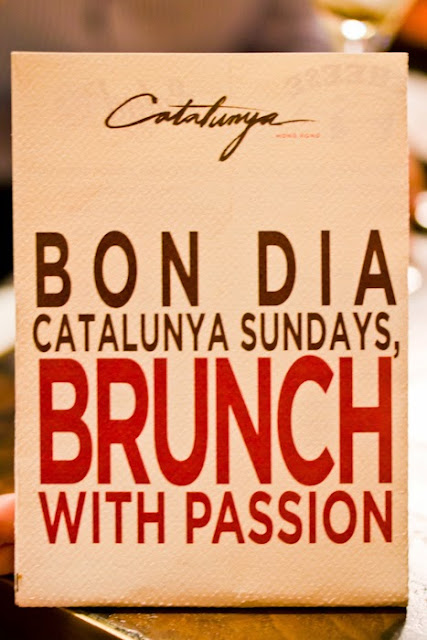 The brunch is not cheap at $590 per person, but you do get a lot of food with that as there is a buffet of cheese/cold cuts/salads/fish, dishes you can order from the kitchen, mains, and a dessert buffet. For an additional fee, you can add free flow as well - Krug Grande Cuvee for $1588 or Sangria/Cava for $230 per person. We picked the Sangria/Cava option and the nice thing was that you can switch between the 2 drinks whenever you want. Cava is Spanish sparkling wine which was pleasant to drink as it was sweet and bubbly. The sangria was also fantastic with the right balance between the flavors of fruits and alcohol. If alcohol is not your thing, unlimited juices were included in the brunch as well with very yummy blends - watermelon and mango, pear and guava, kiwi and apple, and strawberry and guava. 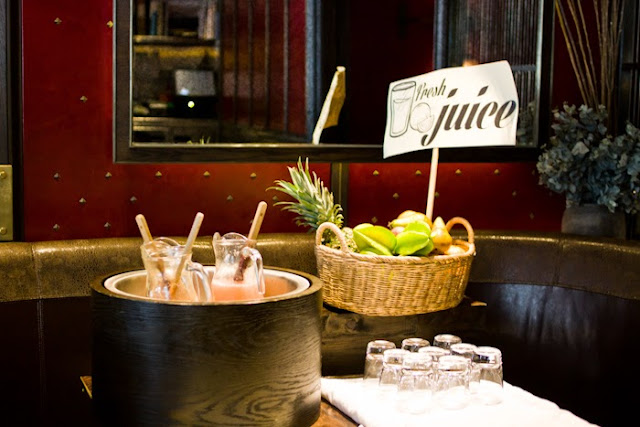 As we sat down, a basket of bread was placed on our table. I wasn't going to waste my precious stomach space on bread at first, but what caught my eye was the caramel butter that came along with it. I tried a bit and OMG it was the best butter I have ever had! Sweet, soft and creamy, it almost tasted like ice cream and I wanted to take a tub home with me so I can eat bread with it all day. Love love love this!

I then took a walk around to explore the buffet placed throughout the restaurant.

Bakery - more bread was available with a variety of choices including baguette, cereals, toasts, cristal bread, and baked goods such as empanada.

Cheese - lots of cheese were available as well with machego, idiazabal, cabrales, mahon, and torta del casar. I'm not a big cheese person though.

Charcuterie  - The cold cuts were pretty good! The iberico ham was very delicious to eat as it was not too fatty or salty while the Iberian chorizo was deliciously spicy. 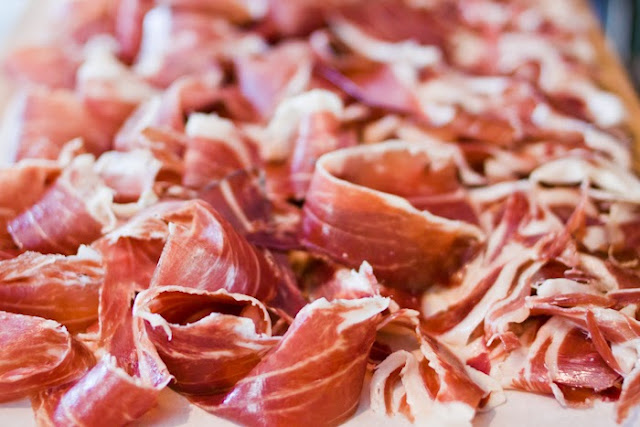 Fish - a wide variety of fish was offered with anchovies, mussels, codfish, smoked mackerel, and smoked salmon. Most of them were just okay as none of them was particularly memorable, but what was disappointing is that they have now started charging for oysters ($40 each) when it used to be free and unlimited before. 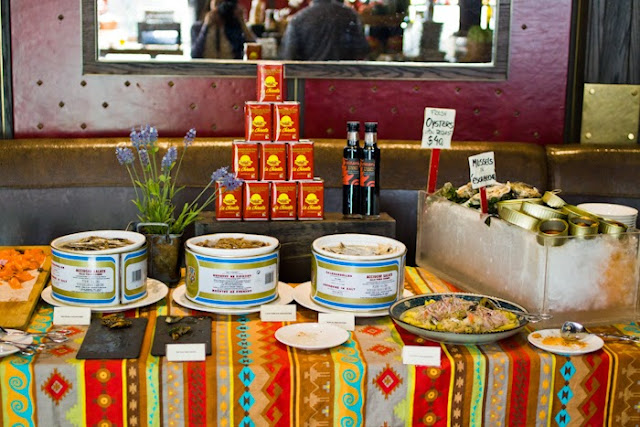 Salad - many types of salad was offered including seafood pasta salad, lettuce salad, tomato salad, green asparagus, and pickled vegetables. It was good to have some lighter and healthier alternatives, but we were also mindful to save our stomach space for higher value items.

One of the more impressive dishes along the salad counter was the steak tartar. The beef used was high quality while the flavors were rich and fresh with a fine and raw taste of beef.

After making the rounds with the buffet, we started ordering dishes from the kitchen. Sandwiches: Bikini - one of the signature dishes of Catalunya! The sandwich was made with iberico ham, cheese, and truffle pressed between 2 crispy toasts. The first time I had the bikini sandwich, I was blown away with its exquisite flavors and textures. This time, the sandwich was a little disappointing as there was too much cheese and not enough iberico ham. Seemed like we were eating a cheese sandwich instead. More cost cutting measures I guess.Mallorquin - this sandwich was made with sobrassada, a type of Spanish red sausage. It was slightly salty and spicy, which was pleasant to eat. Vegetarian - the vegetarian made with zucchini, cheese, and black truffle paled in comparison to the other 2 richer and more flavorful sandwiches. I wouldn't order this one next time.

Eggs:
Deconstruction - simply described as 'a modern twist to the traditional spanish omelette'. The omelette arrived in a martini glass which was a delight in itself. The egg which was in a foam/custard form was scrumptious as it was light, rich and flavorful at the same time. I love the sweetened onion sitting at the bottom of the glass which provided a nice contrast in texture and flavor to the omelette. A delectable dish overall!

Trampo - an omelette with potato, chorizo, and onion. I didn't realize that Spanish omelettes were made with potatoes and fried so they were much thicker than your typical omelette. This dish was delicious to eat as well as all of the ingredients blended well together while the sauce on top enhanced the flavors nicely.

Estrellados with Paletilla - eggs on a bed of potatoes with iberico ham. The iberico ham was delish while the eggs were soft, but my favorite was the potatoes! The potato wedges were very crispy on the outside but still soft on the inside so they were very yummy to eat. I loved this dish as well!

After about an hour or so into brunch, the Show started which was when the staff brought out the 4 specialty dishes to our table but not before parading around the restaurant first. Suckling Pig "Segovian Style" - the first star to parade around was the suckling pig and they made a big show out of it by cutting the pig up with a plate and then proceeded to throw the plate onto the floor to smash it! Baffles my mind how no one has gotten hurt yet but it was definitely fun to watch. The pork was pretty tender and tasty while the skin was nice and crispy.

Veal Shank - the veal shank was served with a thick and heavy sauce. It was an average dish as the meat was not that tender and flavorful. Lamb Thigh - the lamb thigh was served with rosemary. I thought the flavors were a bit light as well as it didn't have much of a gamey flavor to it. Salted Crusted Whole Fish - we were informed during the show that they didn't have this dish as they didn't get the fresh dish delivery during CNY. It was too bad since it was delightful to watch them light the salted crusted fish up with fire last time. After the show, it was dessert time! Lots of fruits, pastries and sweets were brought out to the center of the restaurant for our own picking. Most were good but only a few stood out. Chocolate Mousse - the chocolate mousse was very rich and delightful but it was the sea salt embedded in the mousse that made it stand out. The sea salt managed to enhance the chocolate in a surprisingly pleasant way which made this dessert one of my favorites at the brunch.

Churros with Chocolate - my other favorite dessert was the churros! They only brought out a few baskets at a time so I had to grab one as soon as I saw them before they were all gone. I love churros and the ones here were very crunchy but also a bit hard though. Still, it was still fun to dip them into warm chocolate to eat! Nom nom nom.

Verdict - the brunch at Catalunya was a feast of delight and a gastronomic journey into Spanish cuisine - even with the few hiccups here and there. I just hope they don't deteriorate further to save on costs. The service was top-notch as our waiter was very friendly and knowledgeable of the menu. Plus, our wine glasses were kept filled throughout the meal - which is one sure way to keep your customers happy. I had a fantastic time spending my birthday here with the delectable food, vibrant atmosphere, and wonderful service at Catalunya.