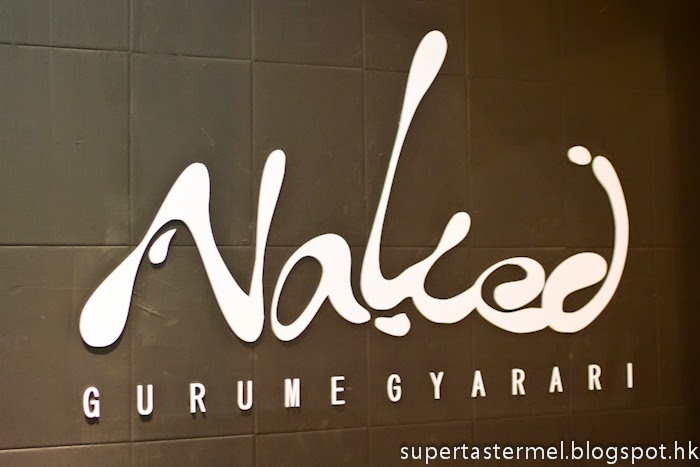 The name of the restaurant may be a mouthful to say at first while intriguing at the same time as Naked Gurume Gyarari literally means "Gourmet Gallery". Focused on Japanese-inspired fusion tapas, it's a restaurant as well as a gallery with the philosophy of injecting art into food and appreciating food from a fresh perspective. The chef is Justin Chan from Locofama in Sai Ying Pun. Thanks to the restaurant and PR company for the inviting me to this tasting event!

Located on the 1/F, the main dining room located on the right had modern wooden furnishings and dark lighting. The decor was simple with Japanese maple paintings canvassing one side of the restaurant. The half-open kitchen allowed us a glimpse into the actions of the kitchen such as the use of hanging heat lamps to keep the food warm while the dishes are being decorated. 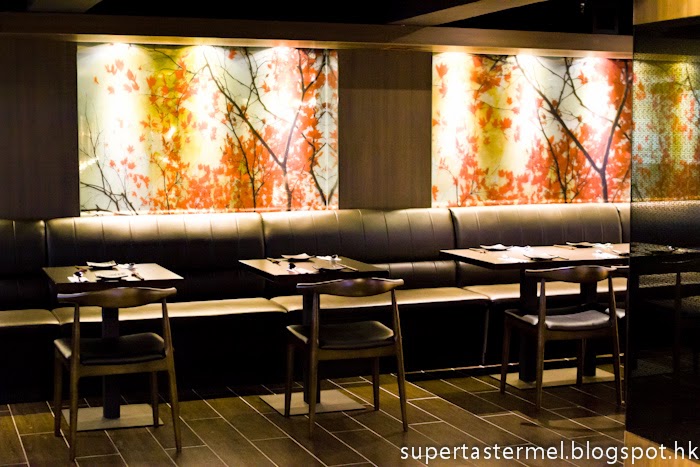 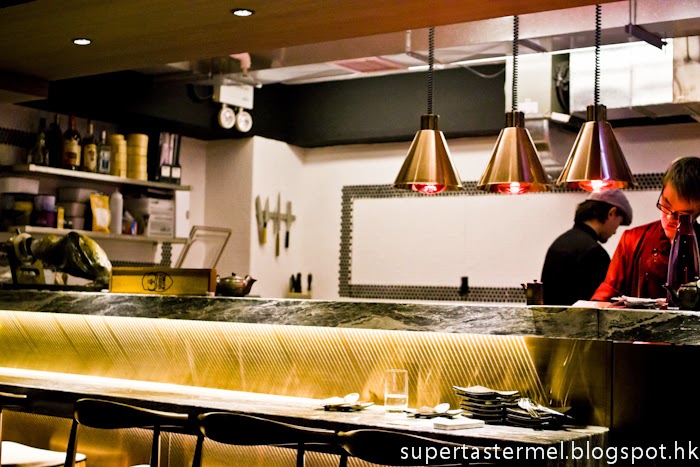 The gallery on the left served as a private dining room as well. The decor here is a stark contrast with the main dining room with white walls and bright lighting. 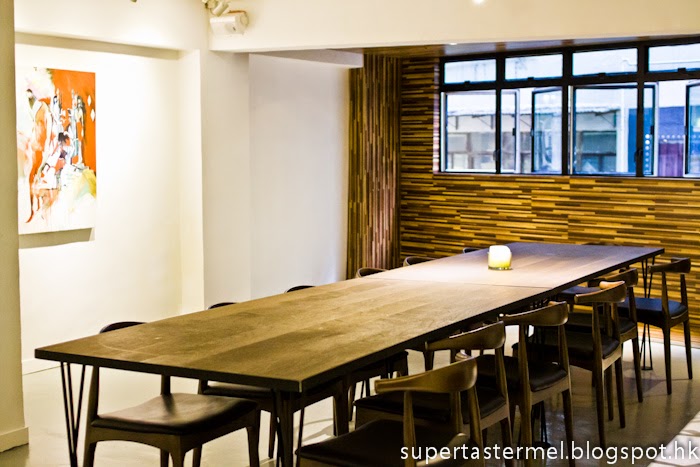 We started off with the Black Truffle Lotus Root Chips ($78) on the small bites menu. The lotus root chips had been deep-fried and sprinkled with sugar, which also came with a yuzu garlic cream and black truffle pate. The chips were thin and crispy to eat while the sauce was deliciously tart and spicy at the same time. [4/5] 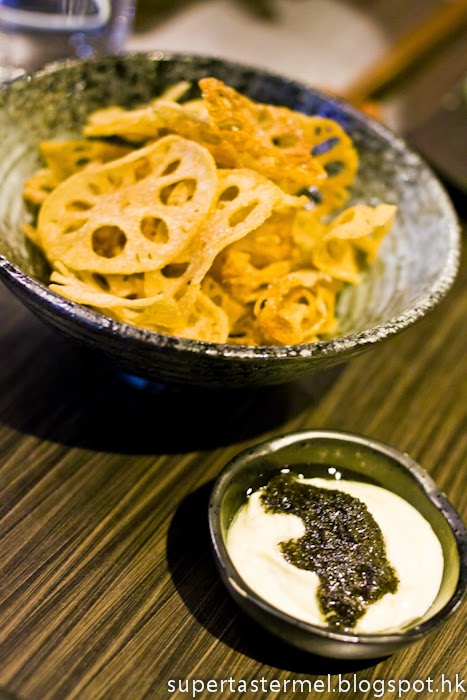 Next up was a salad course with the Hotate with Crystalline Ice Leaves ($168) which comprised of raw scallops, mixed mesculin, and bacon bits. The crystalline ice leaves are an Okinawa specialty which looked ordinary at first but had an amazing texture which was snappy and crunchy! The scallops were fresh and sweet while the tofu and cheese vinaigrette enhanced the flavors in a subtle way. [4.5/5] 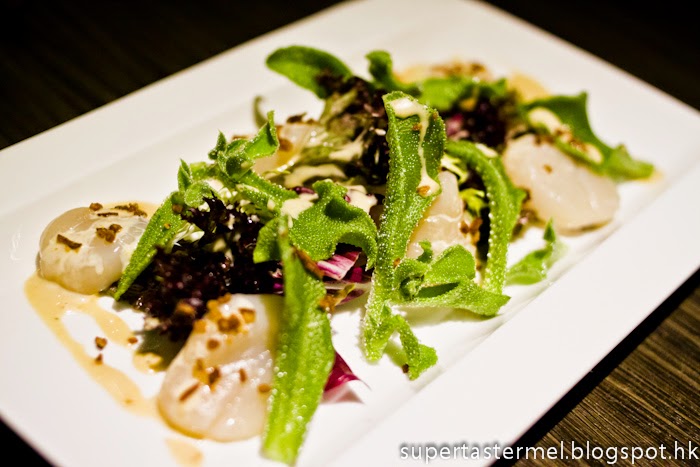 Our soup course was the Lobster Risotto Bisque ($168) with smoked turkey cognac reduction, parsley lime risotto, and lobster bisque which was poured on the spot. While the lobster was flavorful, the bisque was a tad salty and the risotto which wasn't cooked with the sauce was rather dry so it just tasted like regular rice. [3.5/5] 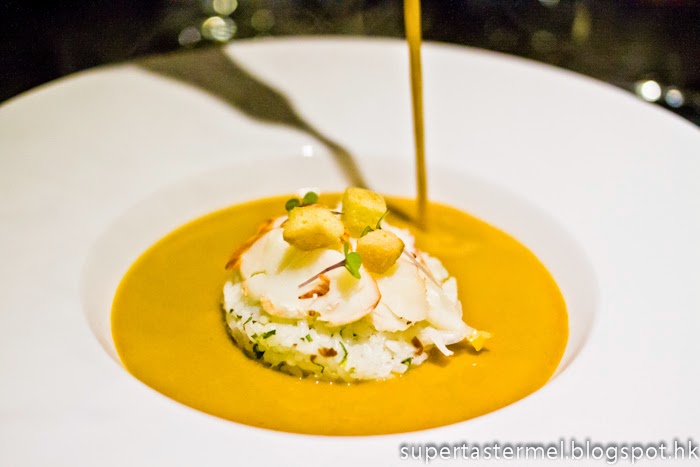 The Tuna Tartar ($138) was a delight to look at with the colorful pairing of poached quail egg and tuna on crispy wonton wrap. The flavors were as expected while the wonton wrap could have been crunchier. [3/5] 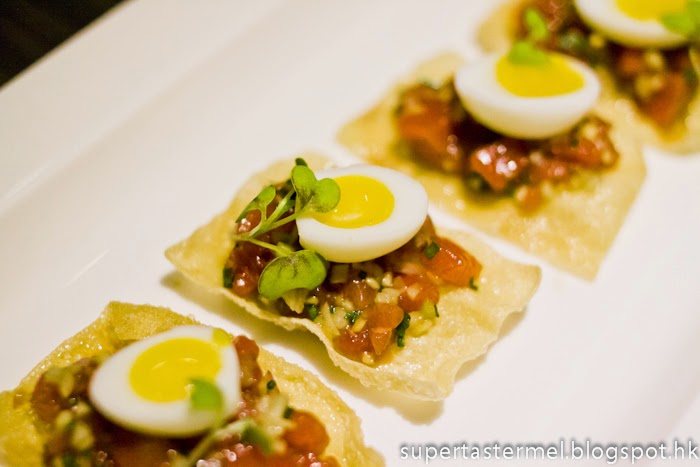 The Toro y 48 Months Iberico Ham Wrap ($168) was arguably the most impressive dish of the night! Sea grapes and mixed quinoa laid on top on a piece of tuna belly with the 48 months Iberico ham on the most bottom layer. We were instructed to roll the wrap together before using a chopstick to pluck out the roll. The flavors melded surprisingly well together as the saltiness of the ham was subtle while the toro was rich and fatty. [5/5] We were then treated with an off-menu vegetable dish of Fiddlehead Ferns as they are seasonal and only available in April-May. I was just in Japan last week which was the first time I tried fiddlehead fern. I love the way it curls and we had a bit of fun posing it before eating. Tossed with mushrooms and cheese, the flavors were refreshingly light and simple. [4/5] 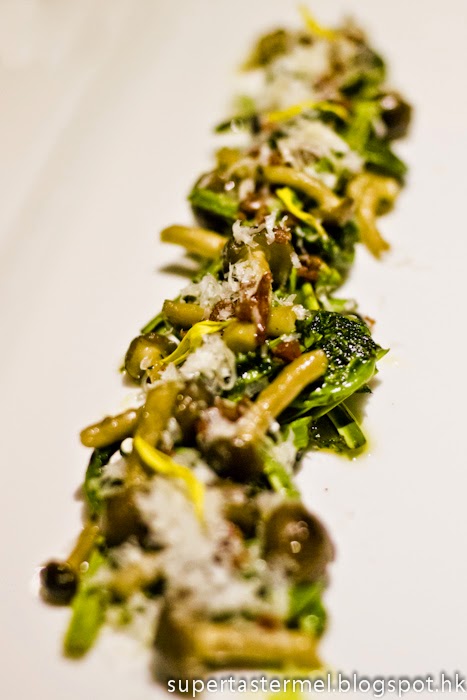 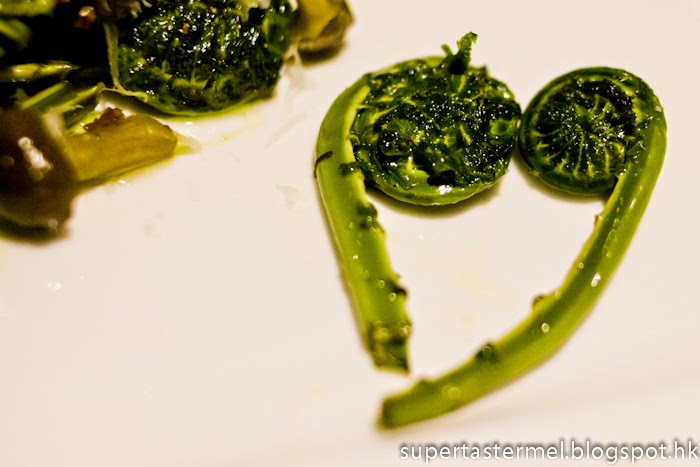 The Foie Gras Pairs with Guava Gelato ($138) was another surprisingly delectable combination with a blueberry sauce atop goose liver and paired with guava gelato. The refreshing flavors of the guava gelato was able to balance the richness of the foie gras in a thrilling way. [4.5/5] 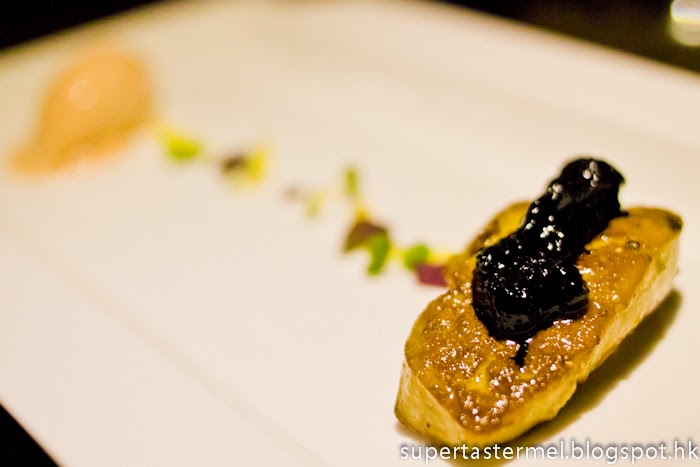 The Uni & Quinoa Pasta ($188) was one of the two pastas we tried that night. Fresh salmon roe and sea urchin were placed on top of linguine mixed with quinoa, bacon loin, cherry tomato, garlic cream, and Parmesan. Quinoa is a super healthy food that is gaining popularity recently - it was the first time I've heard of the food and you can find it included in many dishes here at Naked. The pasta was cooked perfectly but I wasn't sure if the uni worked well with the pasta.  [4/5] 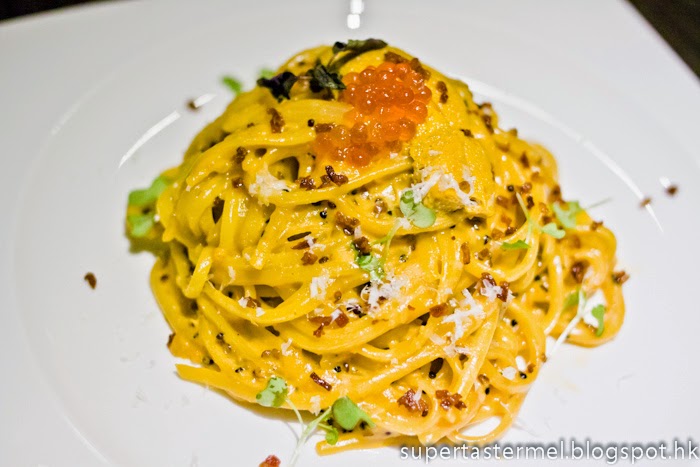 The Braised Tako & Bone Marrow Pasta ($198) was more impressive especially with the slow-cooked octopus which converted the usually chewy texture of the tako into a soft and buttery state. We thought it was a piece of meat at first when we bit into it. We were also treated with pieces of beef bone marrow which adorned the top of the pasta. Tossed with tomato, quinoa, kombu, and bonito, the pasta was splendid with rich and terrific flavors. [4.5/5] 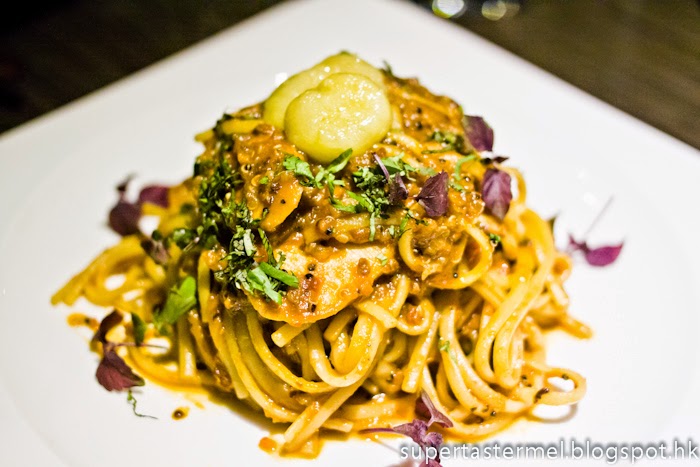 Lastly, we rounded off our night with a unique dessert - Blueberries & Japanese Cheesecake Wrapped in Cucumber. The chef came out personally to explain his concept to us. It also came with a thick chocolate sauce and matcha mochi-like paste extracted by a molecular method. I have to admit while the dish was visually appealing, the ingredients and flavors didn't really seem to gel together as envisioned. It was good but not something I would crave and want more of. [3.5/5] 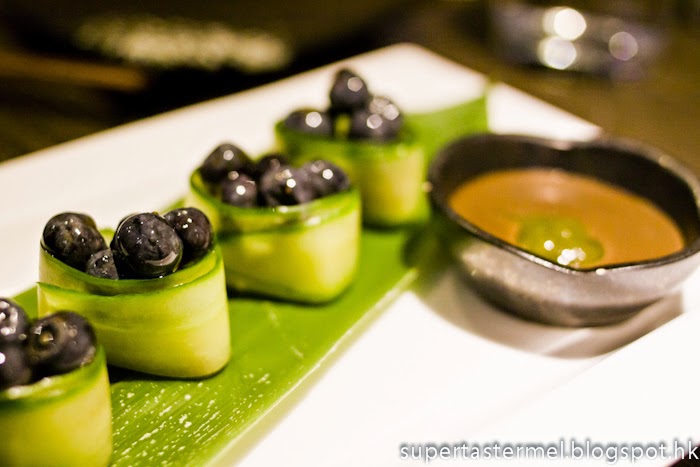 Overall, the food here was delicious with creative combinations of ingredients while managing to retain each ingredients' natural flavor. The prices were also pretty reasonable for the quality of the dishes. If I have to choose between Naked and Tabibito (another Japanese tapas restaurant I visited recently), I'd probably prefer Naked as the execution on seafood was much better.