It's a dream come true to finally be able to visit 3* Sukiyabashi Jiro and try sushi personally made by 93-year-old Jiro Ono who has officially handed over the restaurant to his eldest son so he is not always there anymore (his son Yoshikazu Ono was introduced to us as the owner and head chef). To make the experience even more special, we had renowned food critic Masuhiro Yamamoto with us to explain each piece of sushi we were having so it was like having the documentary “Jiro Dreams of Sushi” come to life! All this was made possible by the amazing gourmet food tour Tasty Trip run by my friend Jocelyn Chen. 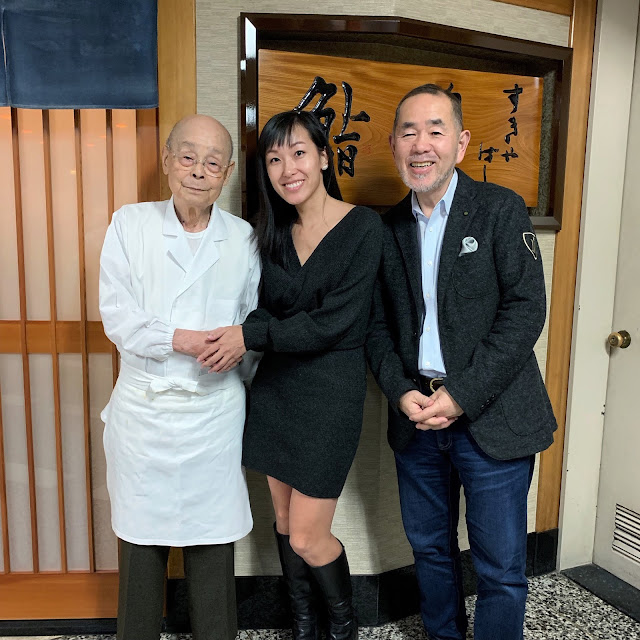 (PS. I swear that Jiro San has the smoothest hands ever! Fun fact: he will only shake hands with women but not men as some guy has hurt his hands before by shaking too hard)

FYI - photography of the food at Jiro is no longer allowed but our guide had special permission from the restaurant.
The omakase menu is divided into 3 movements:- 1st part include classics like kohada and tuna- 2nd part is the seasonal fresh catches of the day- 3rd part is the traditional finale including anago, kanpyo maki and tamagoWe were served a total of 20 pieces of sushi (excerpts from Jiro Gastronomy book are provided below with Jiro San's description on each of his sushi):

1) Hirame is the king of winter whitefish and always served as the first item on Jiro's omakase. Edomae sushi chefs used to start the meal with maguro but mindful of the contrast between strong and mild flavors, Jiro San decided to serve the gentle-tasting hirame first and now many sushi restaurants have followed suit. 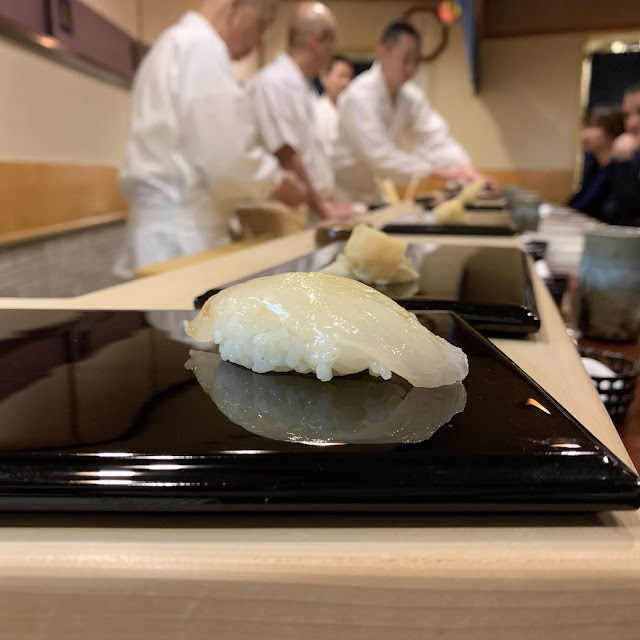 2) Sumi-Ika is delicious year round and is served in lieu of the Aori-Ika which is not readily available anymore due to poor catch. 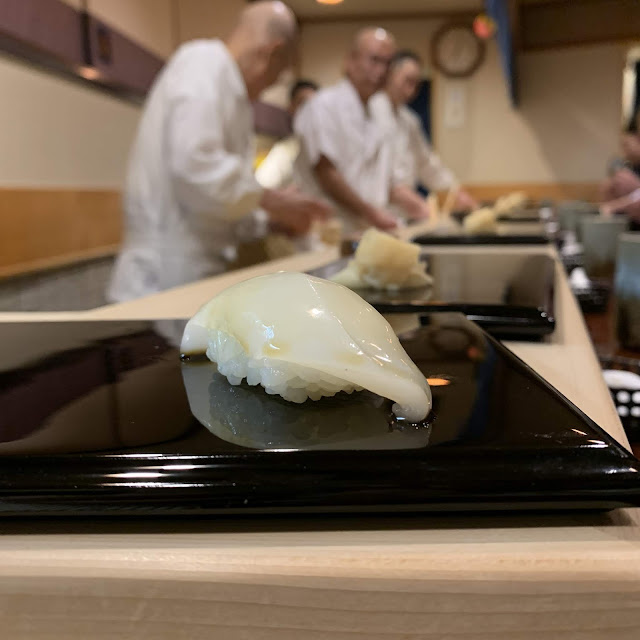 3) Shima Aji is a rare treat as it is hard to find wild-caught ones at the fish market nowadays. They are delivered chilled to the restaurant with its freshness and quality maintained. 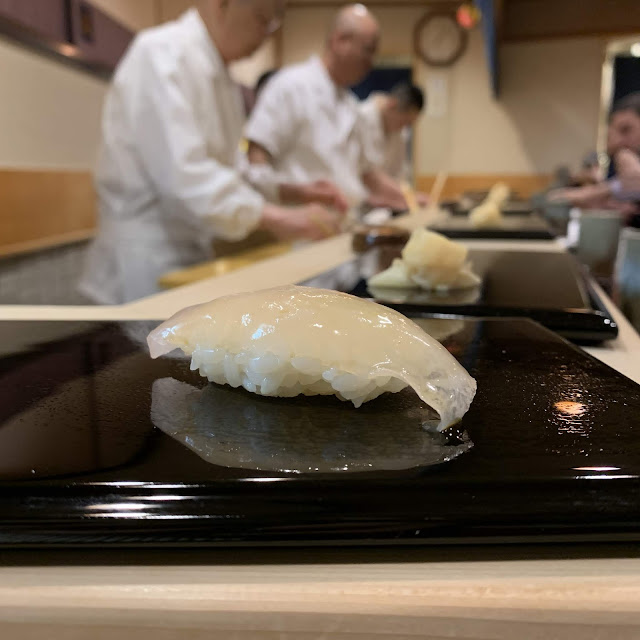 4) Akami is the lean part of the maguro. Since there was no refrigeration during the Edo era, the akami was preserved in casks of soy sauce which is called "zuke". According to Jiro San, the acidity of akami and the savoriness of soy sauce are a perfect match. 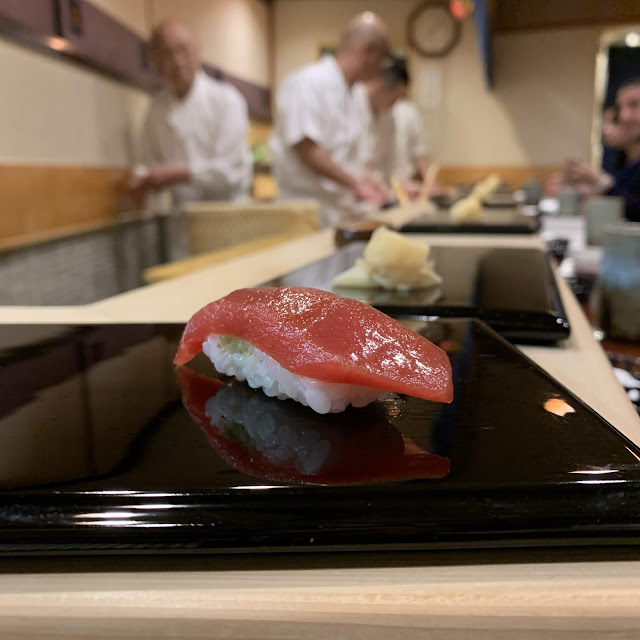 5) Chutoro is the medium fatty tuna between akami and otoro. Jiro San says that when it comes to umami, nothing beats the chutoro. 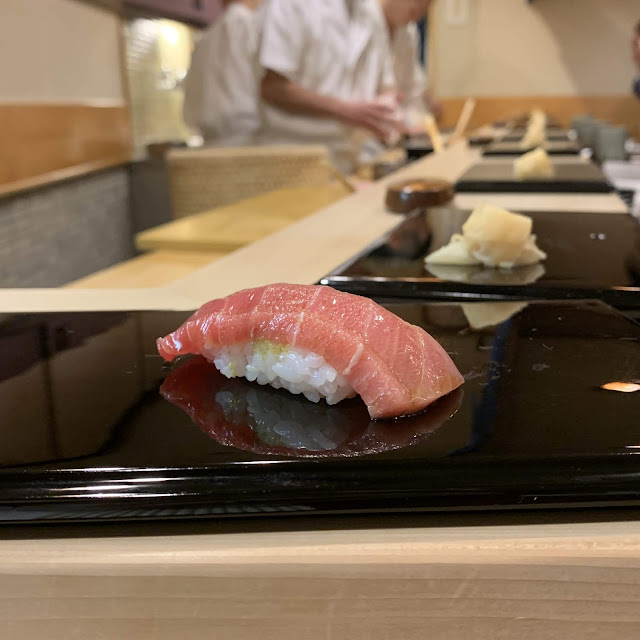 6) Otoro is the fattiest part of the tuna and Jiro San prefers for it to be fragrant more than just being fatty. 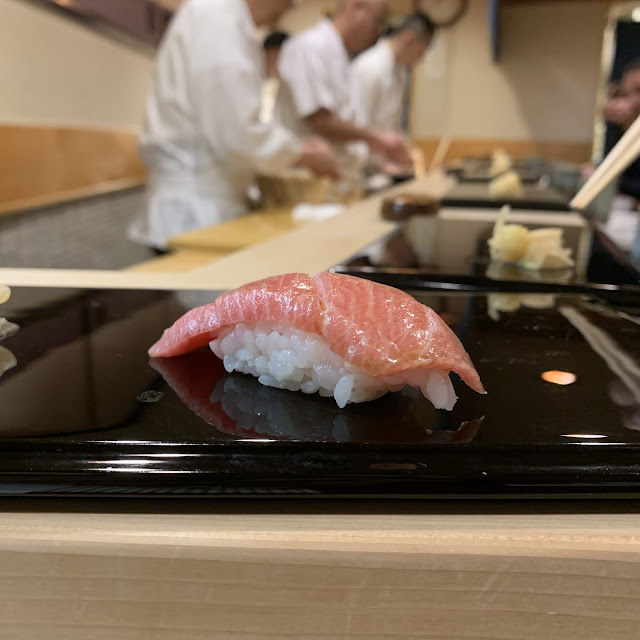 7) Kohada represents the pinnacle of Edomae sushi. Incredible flavor is created by marinating it in vinegar and to Jiro San, it is the most important sushi topping for a sushi chef. 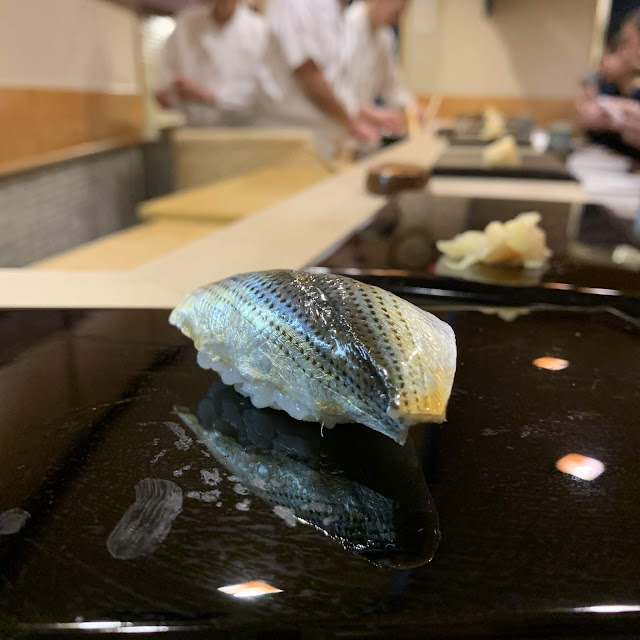 8) Akagai are notoriously difficult to use as you can't tell their quality until you shuck them. Shellfish must be fresh above all else and the akagai are served straight out of their shells at Jiro. 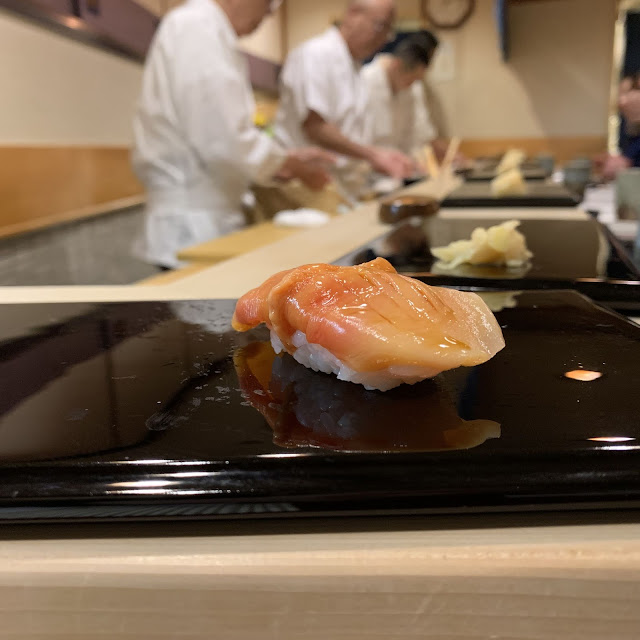 9) Tako is a winter specialty at Jiro. The octopus is kneaded for one hour to release its fragrance and flavor in preparation. 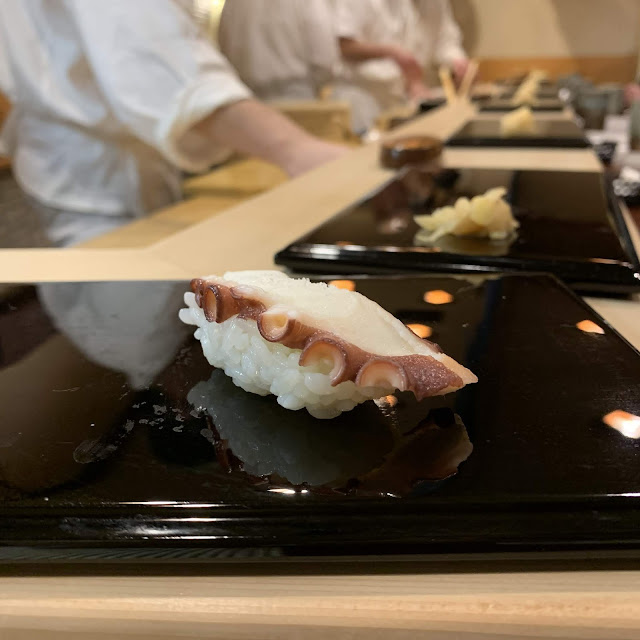 10) Aji is the first fish that Jiro San would work on when the catch is brought back from the market in order to preserve its freshness. It is the most popular requested encore item on the menu. 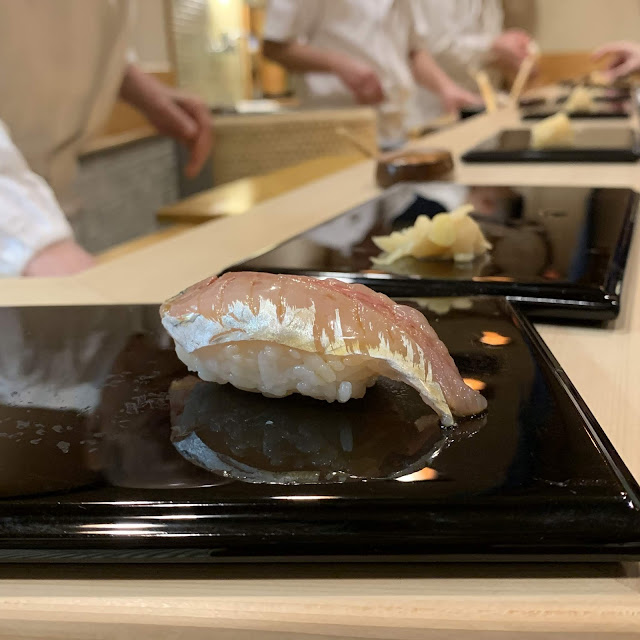 11) Kuruma Ebi is served at many sushi restaurants nowadays by boiling the tiger prawn first just before preparing it for sushi - a practice that originated from Jiro. The sushi is served with its tail shell attached for male diners and without the shell for female diners. 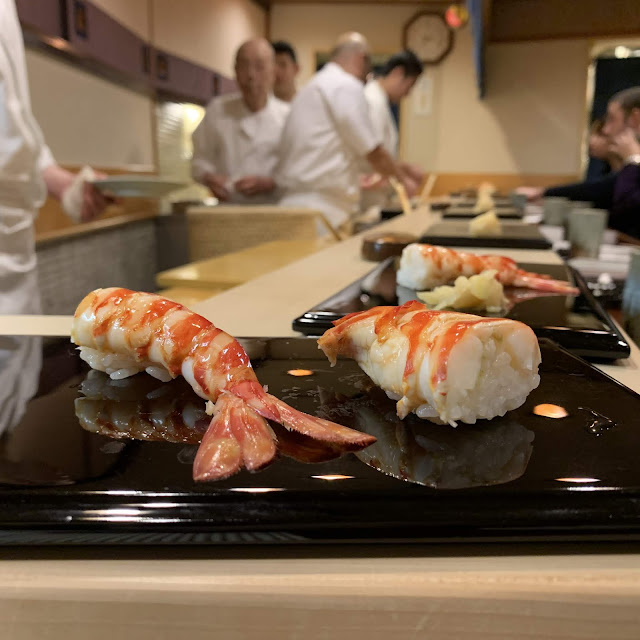 12) Sayori is not considered as a whitefish but a silver-skinned fish. It has a clear flavor and glides on your tongue due to its fattiness. 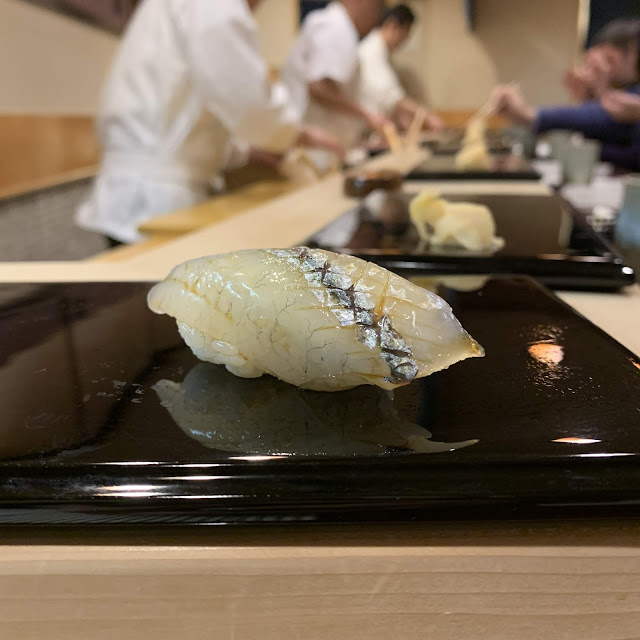 13) Hamaguri was found in great abundance in what is now Tokyo Bay back in the Edo period so it is considered a classic in Edomae sushi. The clam is placed on fire for just a short time before being steeped in broth with seasoning like sugar and soy sauce to adjust the flavor. 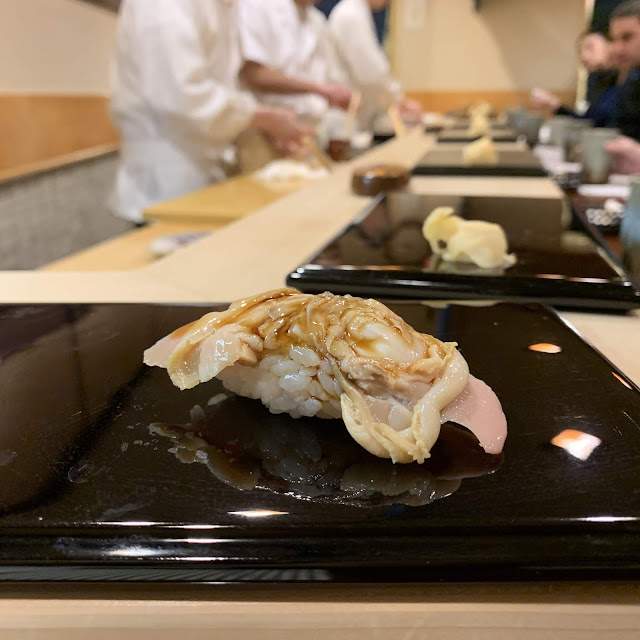 14) Saba is marinated in vinegar for about a week at Jiro in order to fully expose the fish's rich flavor. 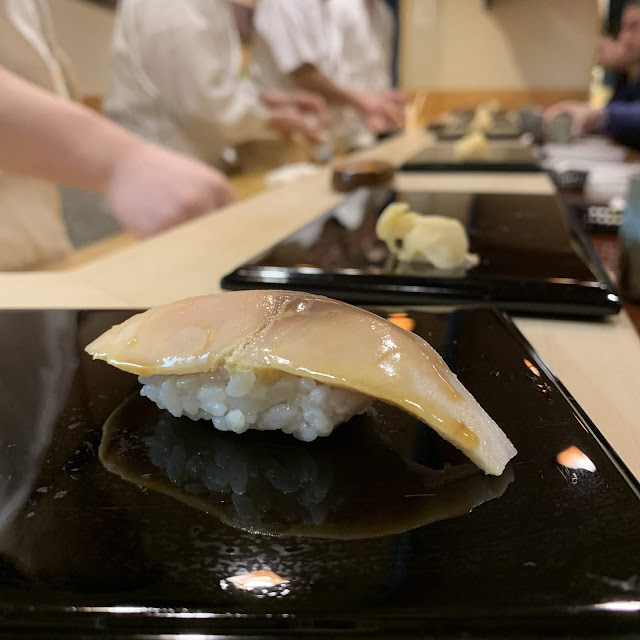 15) Bafun Uni is definitely one of the highlights at Jiro. Rolled with seaweed grilled over coals every morning, the uni and seaweed and rice becomes one when you place the entire sushi in your mouth - as Joel Robuchon famously exclaimed, “It’s as if I’m eating cream!” 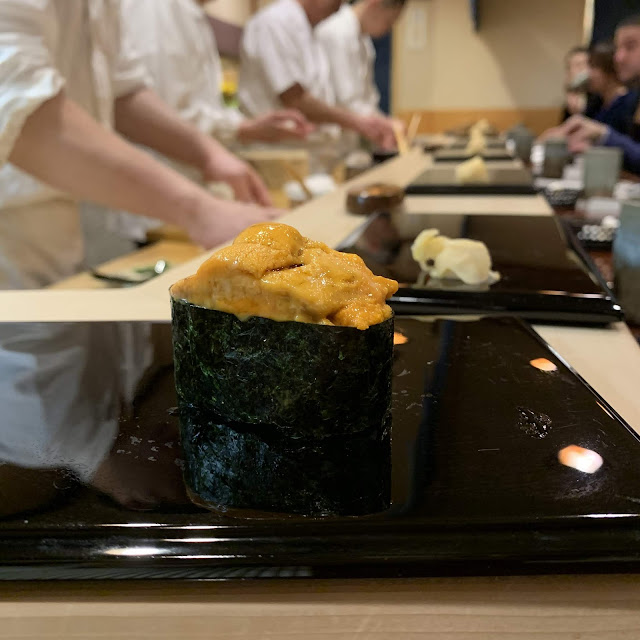 16) Kobashira is the adductor muscle of mactra clams and are bigger in size at Jiro than what is typically served at other sushi restaurants. 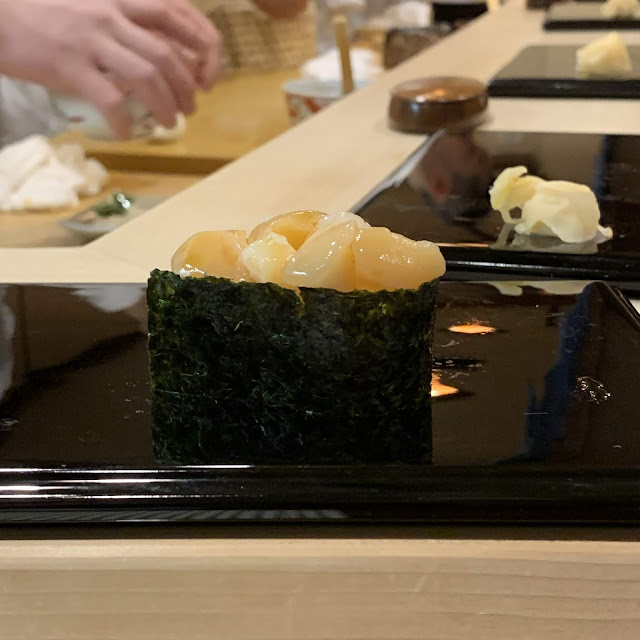 17) Ikura is produced by salmon only once a year in the fall. Because of this, frozen ikura is used so it can be served year-round and is the only frozen ingredient used at Jiro. 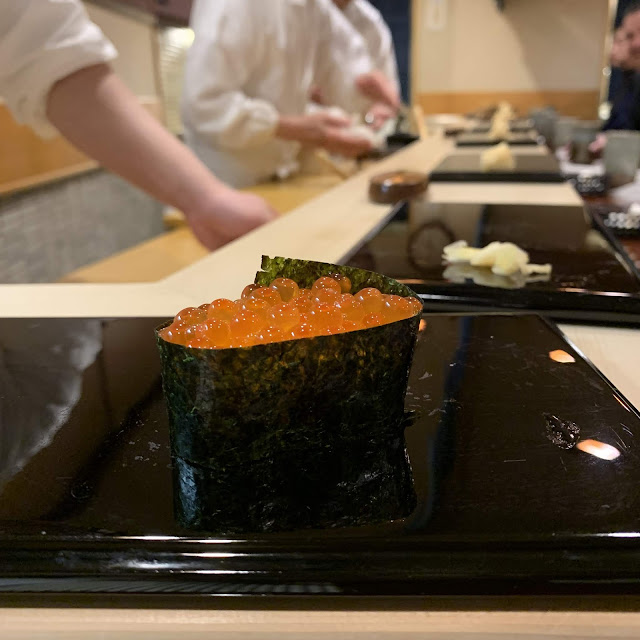 18) Anago is perhaps the most difficult sushi to prepare as cooked anago can be very tender, thus making it hard to be shaped as sushi. 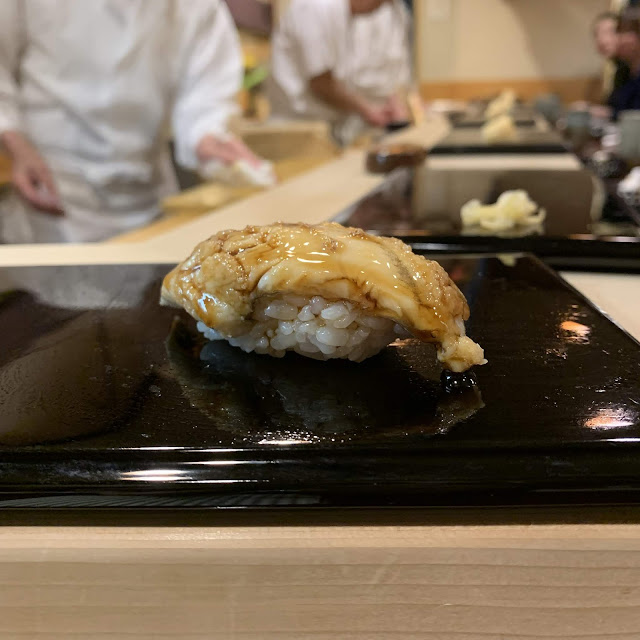 19) Kanpyo Maki is not a part of the omakase at Jiro but is served after the anago upon request. It became a popular item after Jiro San recommended it to his customers. 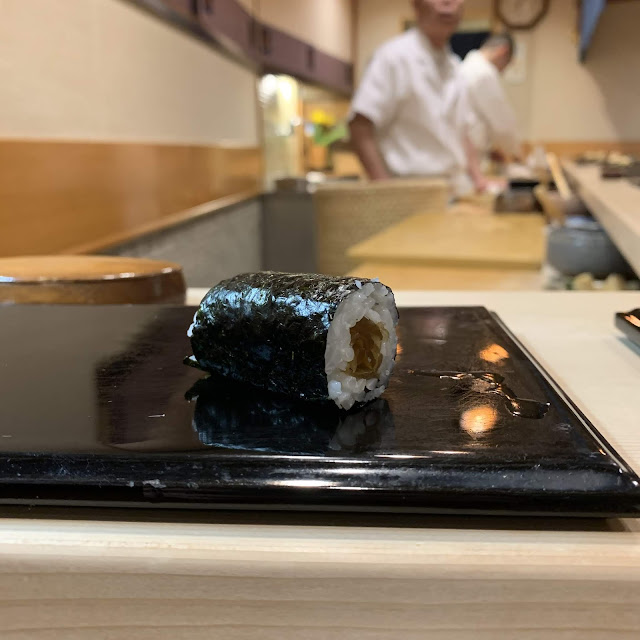 20) Tamago is the final offering of the omakase menu at Jiro. According to Jiro San, a sign of a professional chef is the ability to cook tamago. Grilling just one tamago takes about an hour and besides eggs, Japanese yam and shrimp are mixed in as well. It used to be served on top of rice as sushi, but nowadays it is served by itself like a dessert. 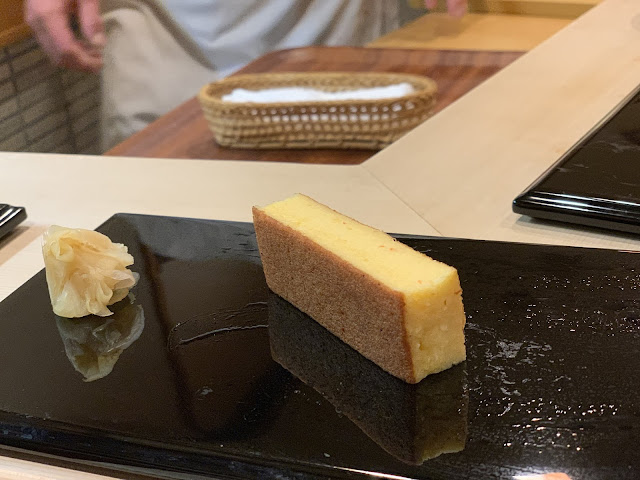 This really was an unforgettable experience to be able to watch Jiro San work his magic which ended with a personally signed menu and sushi book from the master himself! Besides information on sushi, the Jiro Gastronomy book also includes useful tips on sushi etiquette and how to behave at Jiro. 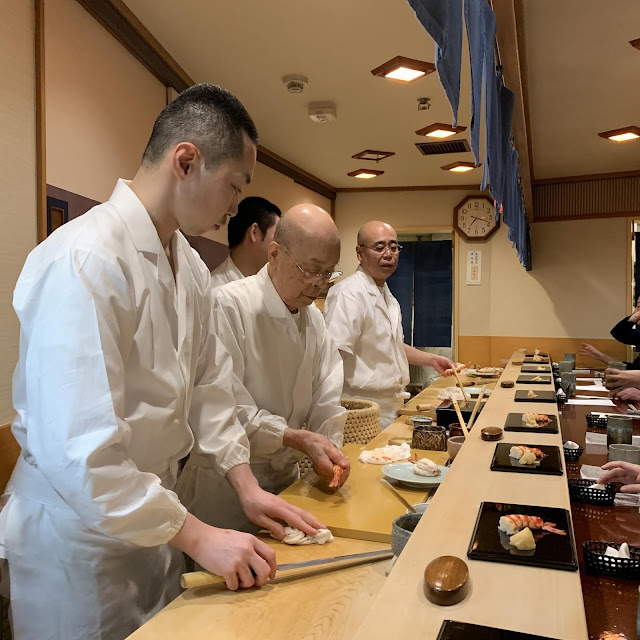 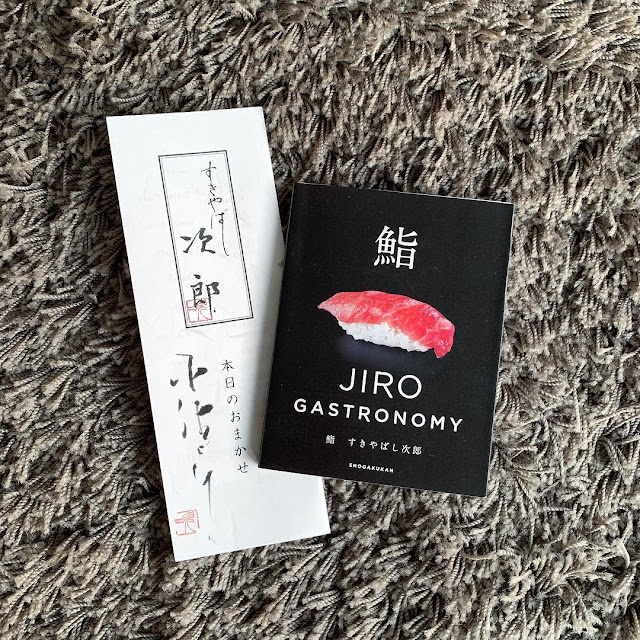 So people always ask whether eating at Jiro is worth it or not and here are some of my thoughts on the experience:

Service: eating is a serious affair here. There is no chitchatting as you are expected to concentrate on dining. Some people take the chef’s sternness as rudeness but he is really just trying to concentrate on his work. So if you prefer to eat somewhere where you can drink and take it slow, then this is not the place for you.
Pace: yes it really is true that you are served 20 pieces of sushi in a really short amount of time (as in 15-20 minutes). Our group probably got a bit more time than usual but still there were times when I was still chewing and the next piece was already placed in front of me (it also doesn’t help that the sushi here are bigger than most because of its traditional style). The worst part is that the pieces actually gets bigger towards the end so I couldn’t help but feel a sense of relief when we were finally finished with the entire meal.
Food: overall it was good but I also wouldn't say it's the best sushi I've ever had. I liked the strong vinegar flavor of the shari but J thought the texture of the rice was too soft for his taste. Standout pieces included the Sumi-Ika, Kohada, Maguro and Anago but the best sushi of the meal goes to the Bafun Uni which was better than any other uni we had on this trip (including Sushi Saito)!

Final note: eating at Jiro is not for everyone. It is an expensive and intense experience - I wouldn't recommend it as your first sushi meal in Japan but if you are ready for a mentally and physically challenging sushi experience, then Jiro should definitely be on your bucket list.