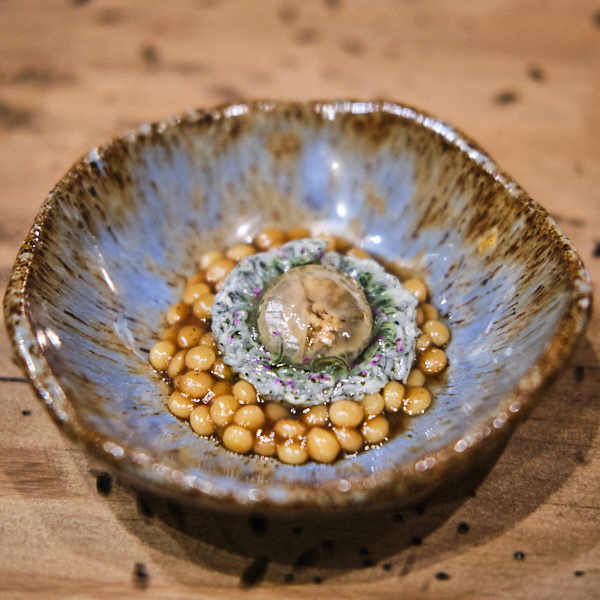 Rating: 4.25/5
Our next stop was 1* Baga in Jaén! It’s not a restaurant that is easy to get to but as it came highly recommended, we decided to make a detour just to eat there. The chef Pedro Sanchez had worked for 16 years at Casa Antonio as well as Chateau de Bagnols and Martin Berasategui before opening his own restaurant 4 years ago. The space is small and intimate with only 7 seats available but its spirit is certainly big and bold with dishes that are original and creative. I’ve actually tried one of the chef’s dish before at one of OAD's dinners a few years ago in San Sebastián, so it’s great to be able to get the full experience this time. A single tasting menu with seasonal local ingredients is available for €75 per person. 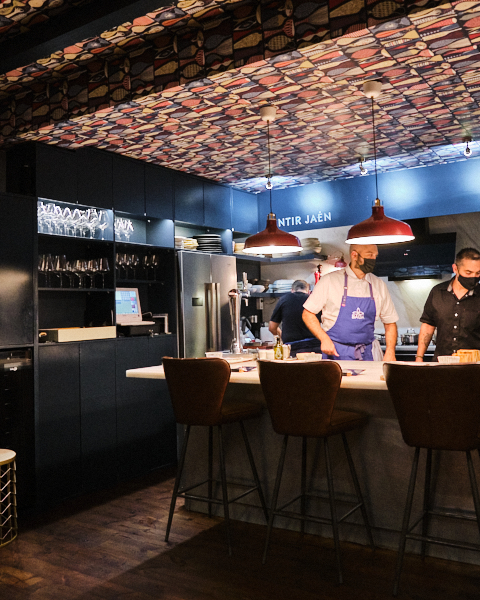 Pumpkin Soup made with pumpkin that had been fried in olive oil with chili and garlic. 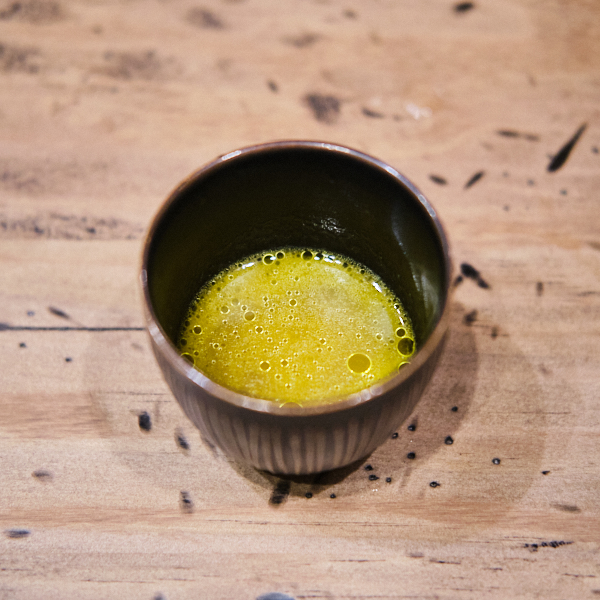 Spicy Corn Tart and Black Sausage Fritter which is a classic and typical dish in Jaén. 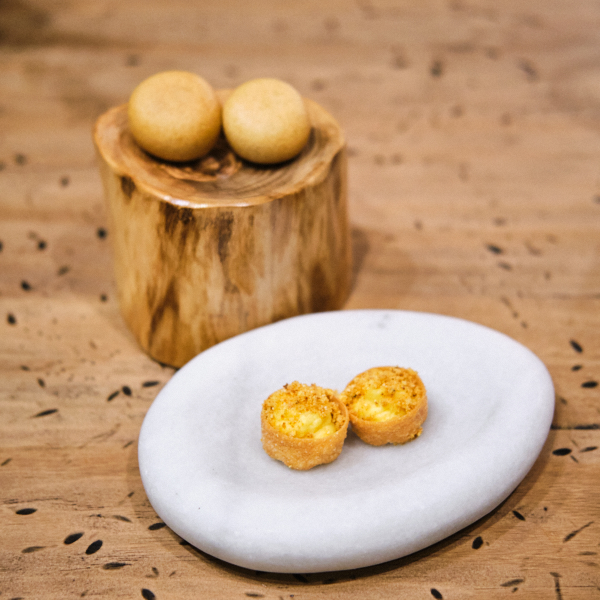 White Prawn & Pickled Partridge is a signature dish here and the one I’ve tried before at OAD's New to the List Dinner in San Sebastian. 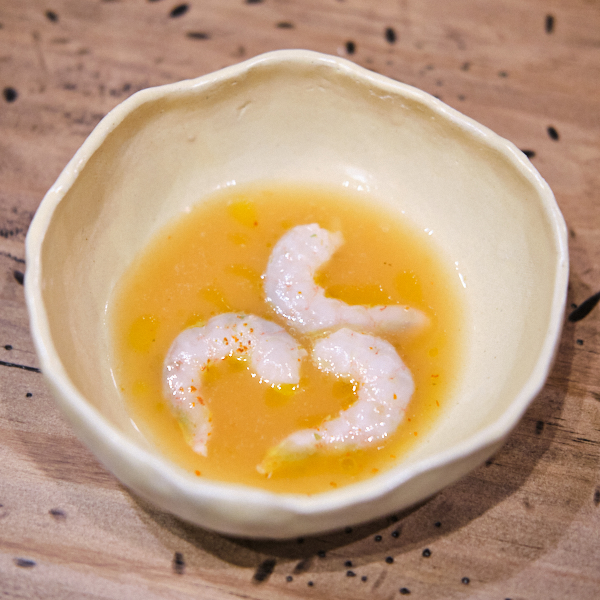 Bread here is made with black olive and olive oil. Jaén is actually the largest producer of olive oil in Spain and worldwide with 4 common varieties - Picual, Royal, Arbequina and Cornicabra. We were graciously given a bottle each as keepsake and we couldn't get enough of it! 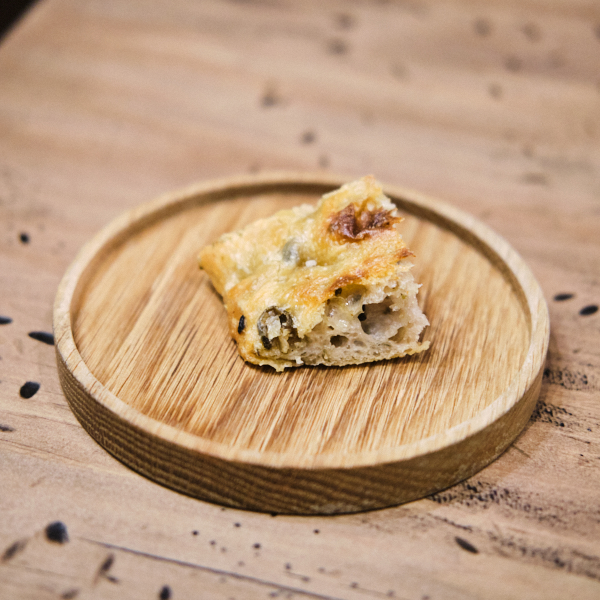 Fig, Goat Butter & Cucumber was intriguing in appearance with its white on white presentation, and the unique combination came together pretty nicely to my surprise. 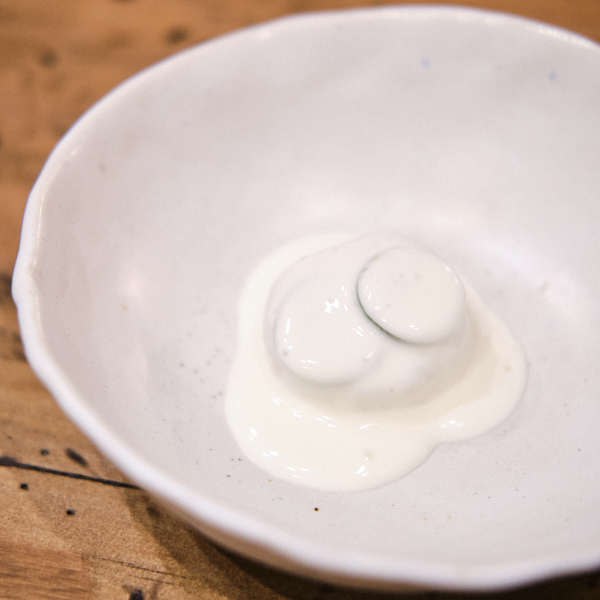 Beetroot Cooked in Prune Juice & Rose Vinegar was lovely especially with the silky texture of the beetroot. We were told to tear up the rose petal by hand and eat the sliced beetroot like pasta. 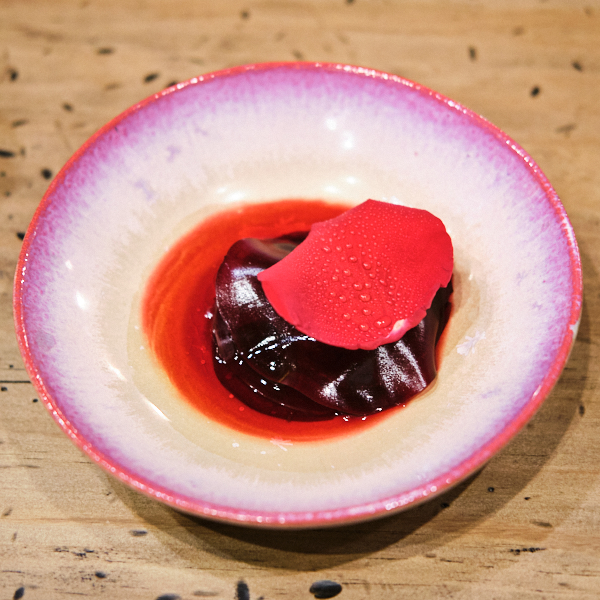 Another stellar combination was the Oxidized Pear with Smoked Eel Skin Foam! Pear and eel? It works! Who knew? The pear is from South Korea and oxidized for 48 hours. 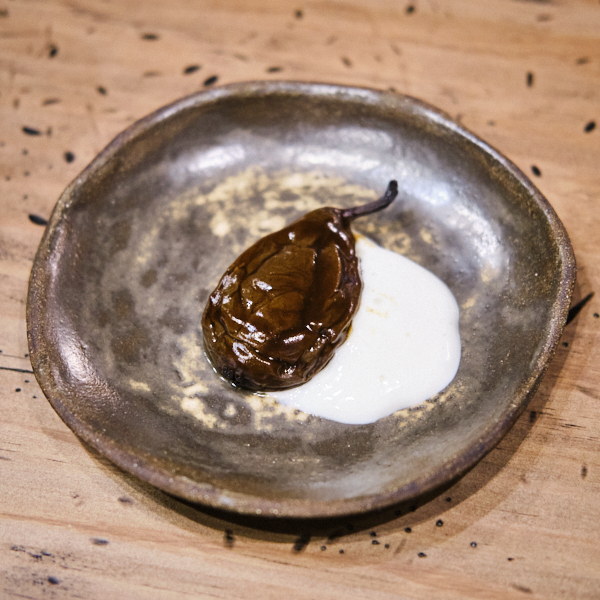 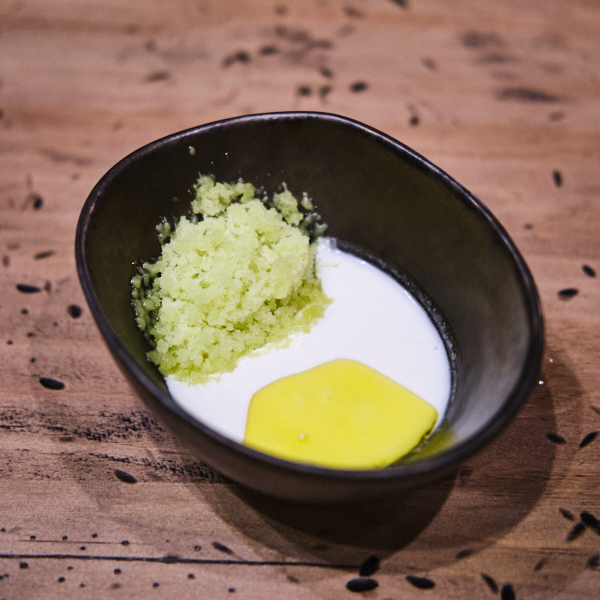 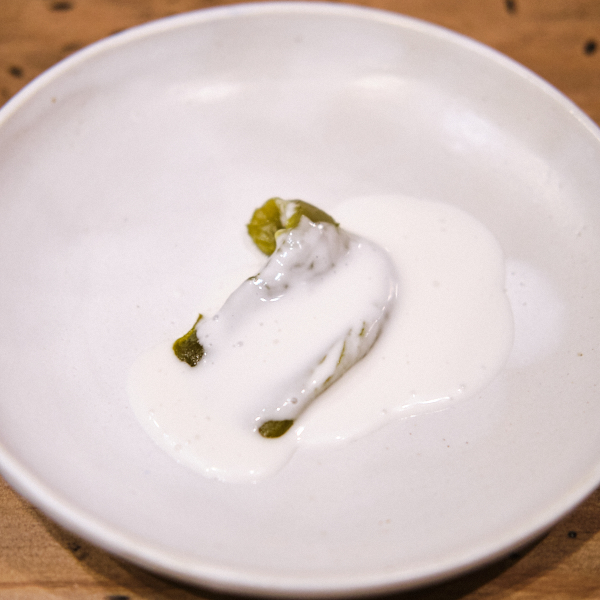 The Ile d’Oleron Oyster cooked in mushroom essence was slightly disappointing. When I heard the explanation of the dish, I looked forward to a dish full of umami flavors. While the oyster was nicely cooked and inherently flavorful, the soup was cold and bland. There were no mushroom flavors detected so we were confused about this combination. 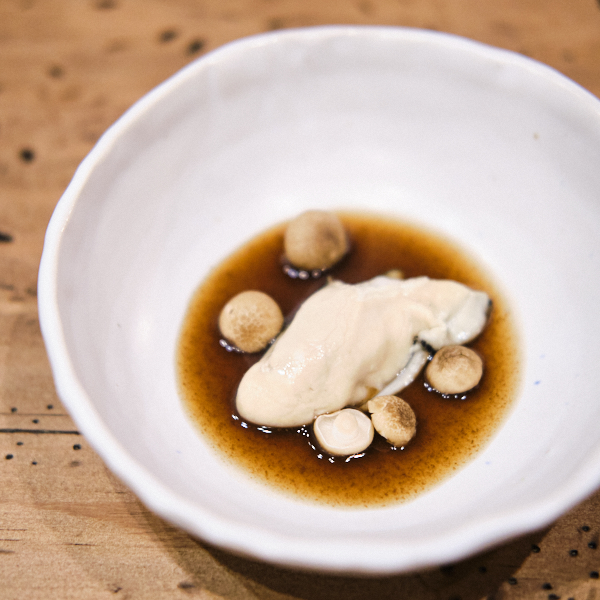 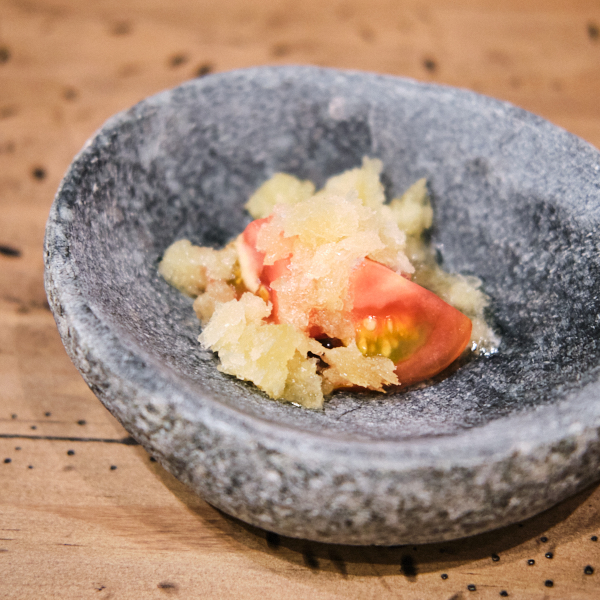 So I can’t believe that I forgot to take a picture of my absolute favorite dish Honey with Roasted Garlic Praline! I’m usually pretty diligent with taking pictures of every dish but sometimes I forget especially during multi-course meals, so here’s a picture of it from their account. We were told that the chef loves working with sweet ingredients even in savory courses, and this was just an unbelievable combination. Loved it so much! 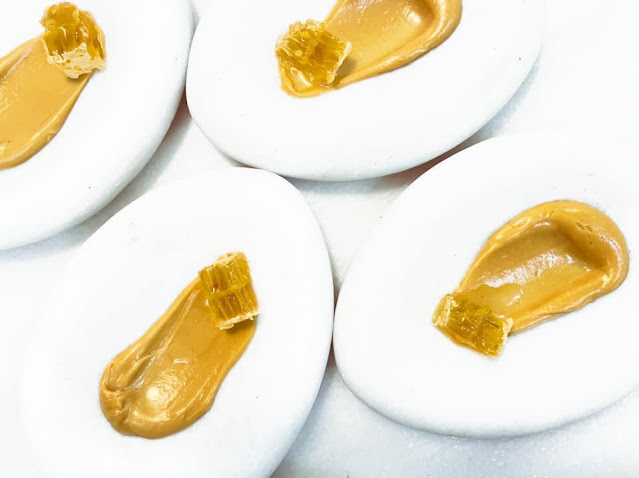 Sea Anemone, Wheat & Tuna was a real treat as sea anemone is a delicacy in Andalusia! Typically fried, the sea anemone here is cooked and served with couscous cooked in red tuna stock. 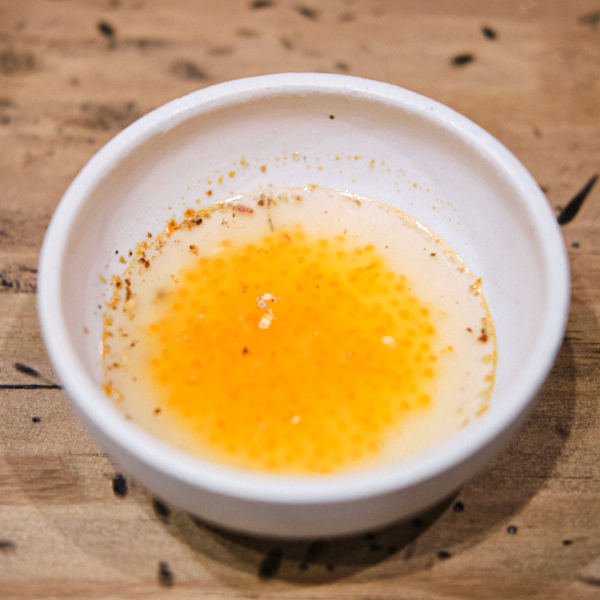 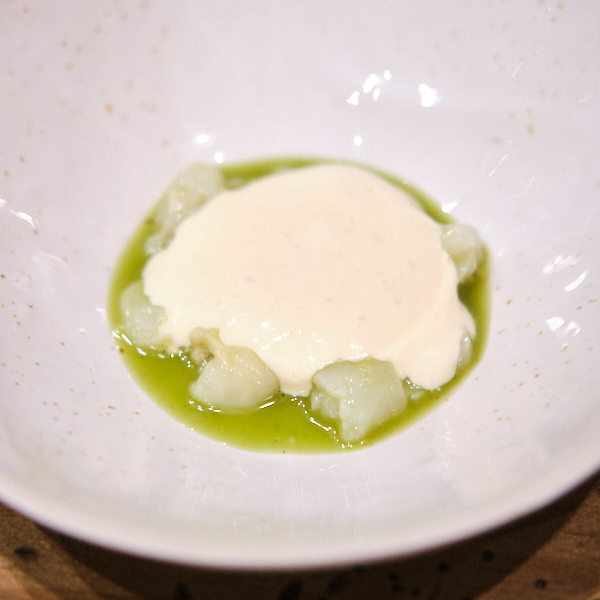 The last savory dish was the Aged Beef with Vanilla Sauce. The beef had been dry-aged for 180 days (!) and served only with vanilla, butter and salt. I actually had a lot of difficulty cutting the beef with the utensils given (the fork was weirdly shaped and uneven), so I ended up trying to tear the beef with my teeth and getting a mouthful of the fat which made me a bit queasy afterwards. The aroma of the vanilla was nice and unique of course, but I wished it was easier to cut the beef in the first place. 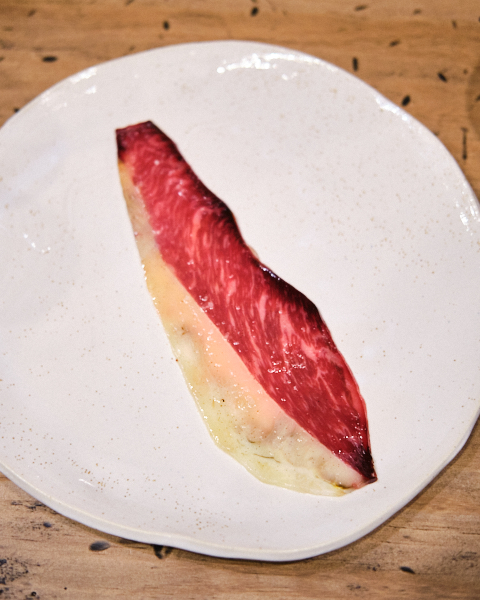 Desserts were a solid affair starting with the lovely Roasted Peach with Sweet Pickled and Double Cream. The caramelized peach was super delicious as was the double cream ice cream. 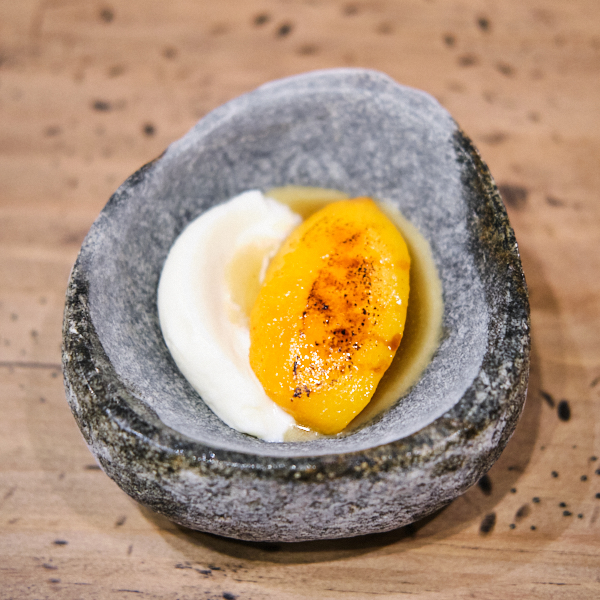 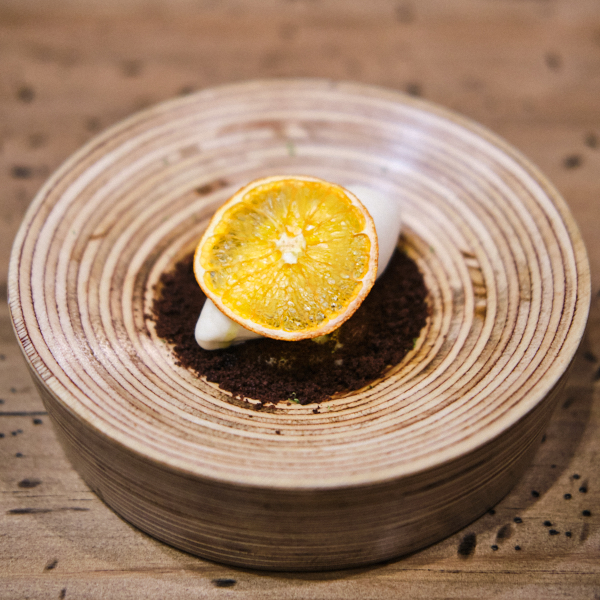 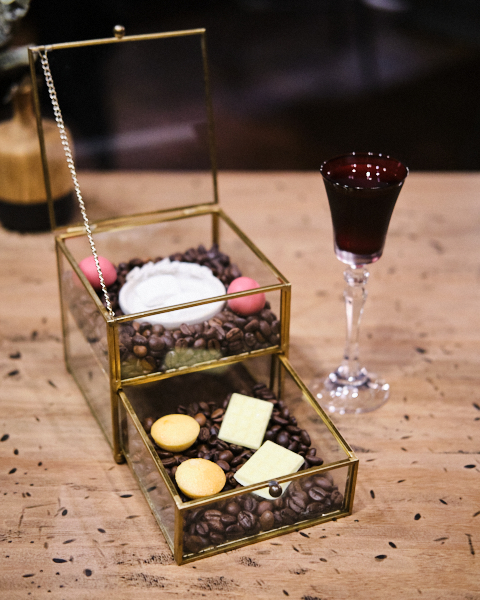 Baga was certainly an interesting meal with unique dishes that were at times pushing the boundaries (and they know that). With that, there were bound to be dishes that work and doesn’t work. It stimulated a lot of discussion between J and I, and for that I think it’s a restaurant worth traveling to if you want a meal that challenges your idea of gastronomy.