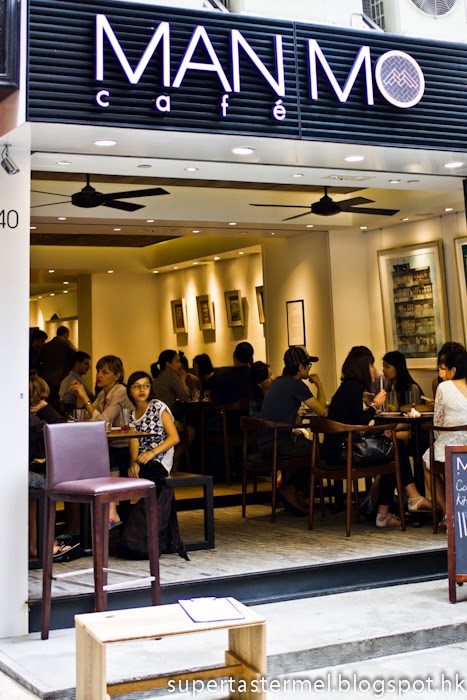 Named after the Man Mo Temple, MAN MO Cafe is located nearby on Upper Lascar Row - better known as Cat Street where you can find tons of retro Chinese antique stores. As they don't take reservations on Sunday, we were lucky to find 2 seats available right away during lunch time, but they were counter seats by the bar area so it was not too comfortable to sit for long. The restaurant looked like a stylish art gallery with its bright white walls and various paintings on the walls. Even the the cups and plates were quite dapper with its traditional Chinese patterns.

MAN MO Cafe serves fusion dim sum all day long as well as several choices of soup, rice and noodles. For the dim sum, you can choose between 2 and 3 pieces, but the prices for the dim sum were not cheap ranging from $48 - $88 for 2 pieces and $70 - $130 for 3 pieces. Between the 2 of us, we ordered several dishes of dim sum and desserts to try. 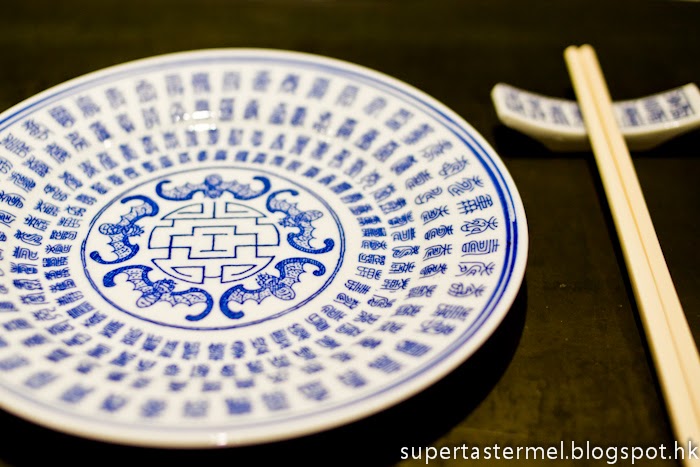 Scallop Xiao Lung Bao ($88) - the dim sum was noticeably different from the start as it came in a square steam basket instead of a traditional round basket. The fillings inside were chopped scallops and bamboo shoots and while the flavors were alright, it was quite dry without any juices or broth which is the quintessence of a good xiao lung bao. Because of that, the fillings seemed better suited in a har gow actually. Also, the skin of the xiao lung bao was too thick and there was a weird smell on it as well. [3/5] 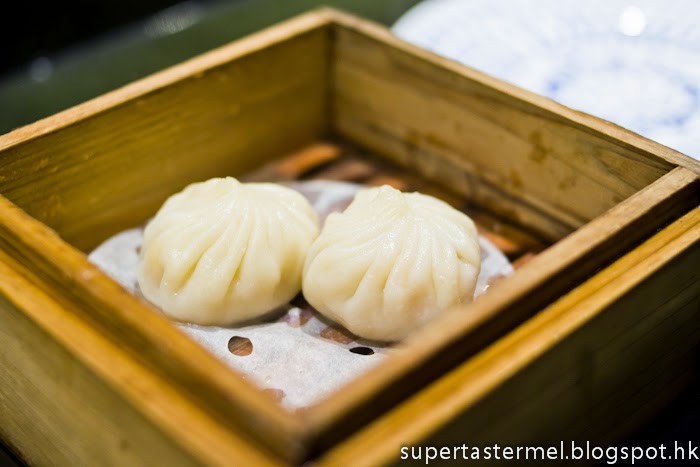 Foie Gras Xiao Lung Bao ($88) - the foie gras xiao lung bao fared a bit better than the scallops as there was at least some juices along with the filling - though it was quite oily. The fillings were rich and flavorful but the skin of the XLB suffered from the same fate as the other one. [3.5/5] Burgerbun ($68) - the buns arrived with 2 cute little bottles of spicy mayo sauce for you to squeeze into the bun as you eat it. Inside the baked bun was some ground beef which was a bit dry to be honest. The sauce really made a difference here and enhanced the flavors tremendously. [4/5] 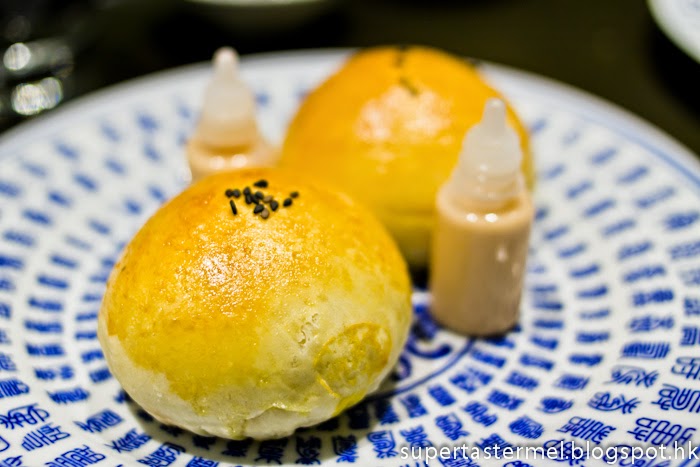 Beefcheekbun ($58) - the beef inside was soft and stringy like those you'd find in a beef stew  while the steamed buns were served along with a tomato based sauce for you to dip into. The flavors were exactly as described - just beef stew stuffed inside a steamed Chinese bun. I couldn't quite put my finger on what's wrong with it at first, but perhaps the similar mushy textures of both the bun and beef were unexciting together. It would have been better to pair it with contrasting textures like a crunchy layer. [3/5] 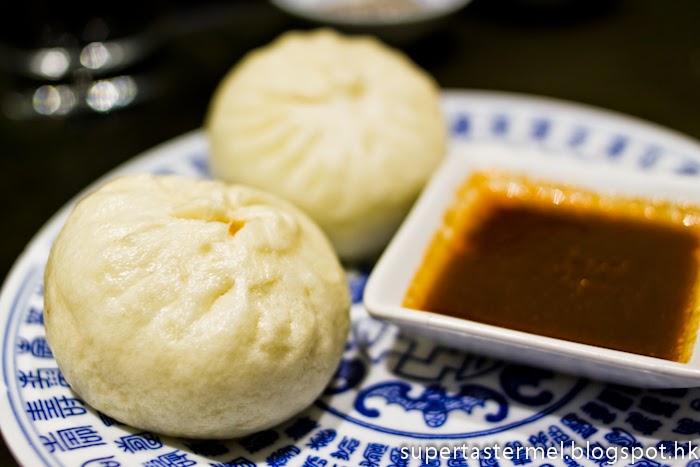 Tomato Mozzarella Veggie Dumplings ($48) - the veggies dumplings looked promising at first glance with the green pesto dumpling skin. Similar to the XLB, the dumpling skin was still too thick but at least tasted better with a hint of pesto flavor. The fillings were chewy and delightful with the melted Mozzarella cheese and juicy chopped tomatoes. [4/5] 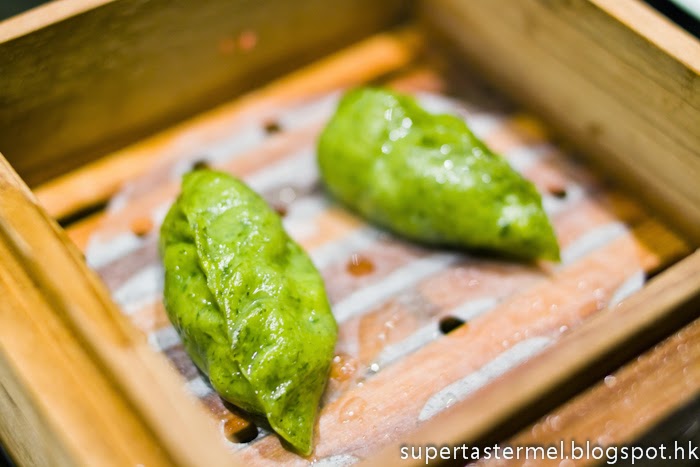 HK Egg Lemon Tart ($26) - the egg lemon tart dessert was one of the better dishes we had here! The filling was delectable as it was basically similar to a lemon chiffon pie with tart and light flavors. The pastry shell didn't taste like an HK egg tart though but it was still nice and crumbly to eat. [4.5/5] 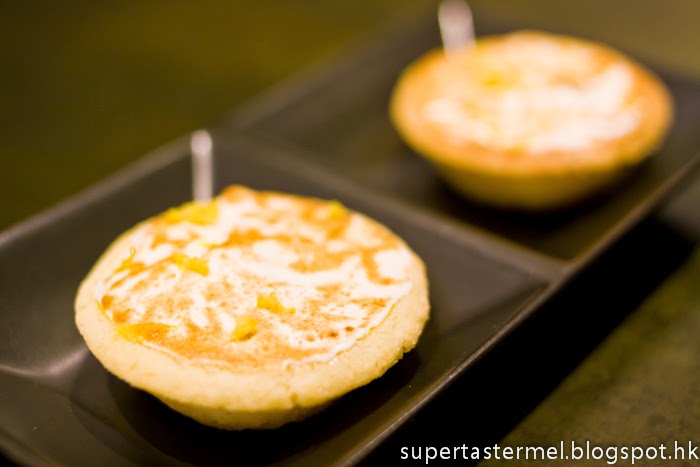 Nutella Ball ($20) - I do love Nutella so I had to get this dessert! The hardened Nutella was placed inside a fried sesame ball, and while the chocolate filling was yummy to eat, it didn't gel together with the jin deui as well as I'd thought it would. Both ingredients were just chewy without any contrasting textures - perhaps some chopped hazelnuts inside would have been better. [3.5/5] 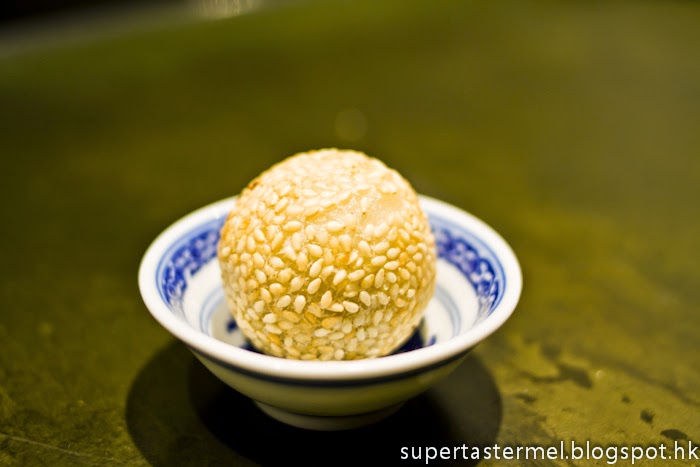 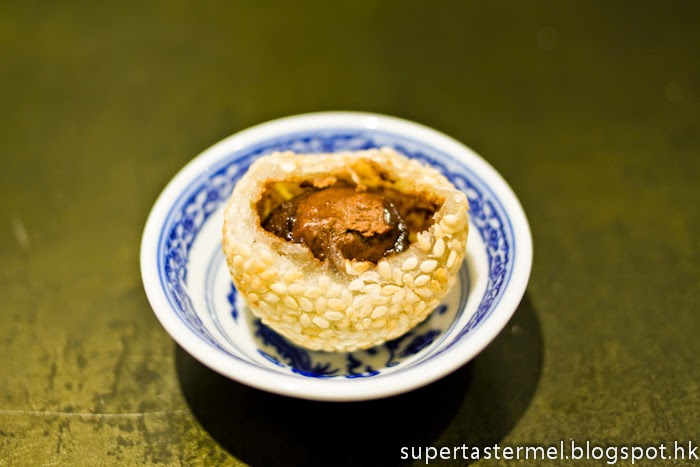 Verdict - Having spent $250 per person on tiny portions of food, I'd have to say that I was a bit disappointed with the food at MAN MO Cafe overall. Initially I was very excited to try the fusion dim sum here as some of the creations sounded rather bold like pairing Nutella with fried sesame ball and tomato Mozzarella with dumplings. I was intrigued and wanted to find out if someone had finally succeeded in making fusion Chinese work, but unfortunately they didn't. There's room for improvement such as the fundamentals of dim sum like better dumpling skins and more thought into the textures and flavors of each dish. Fusion is always tricky to do and right now there seems to be a disconnect between the East and West element as the dim sum in its current state doesn't make them better than the original dishes. Just because you can doesn't mean you should. Much can be debated on the creativeness of the X-treme Chinese cuisine at Bo Innovation but at least the fundamentals were there and the food tasted good. Yes MAN MO Cafe is a nice place to chill and will appeal to many with its hip and modern decor, but just don't confuse good style with good food.