The last event of the OAD Weekend in Paris culminated with the announcement of the European winners in 2017 - congratulations to Alain Passard (L'Arpege) for winning #1 Restaurant in Europe for the second year in a row, Lume for Best New Restaurant and Aponiente for Highest New Entry! The night's line-up of chefs included: 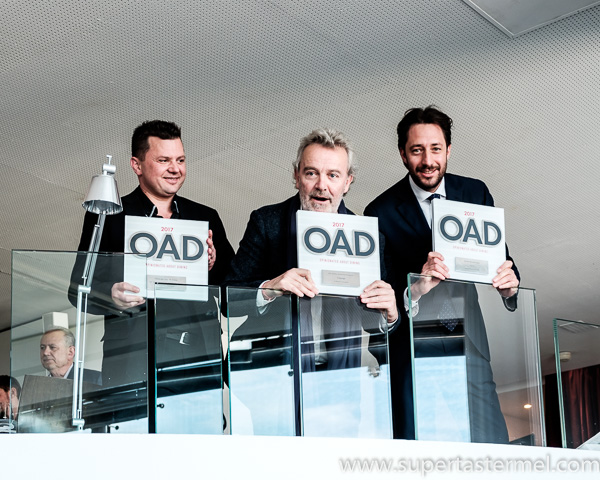 The theme of the dinner that night was actually "My Grandmother's Cooking" and two of the chefs even brought their own grandmother to the event! Each dish came with the chef's explanation and it was interesting to read the backstory behind each one - read on below for the inspiring stories. 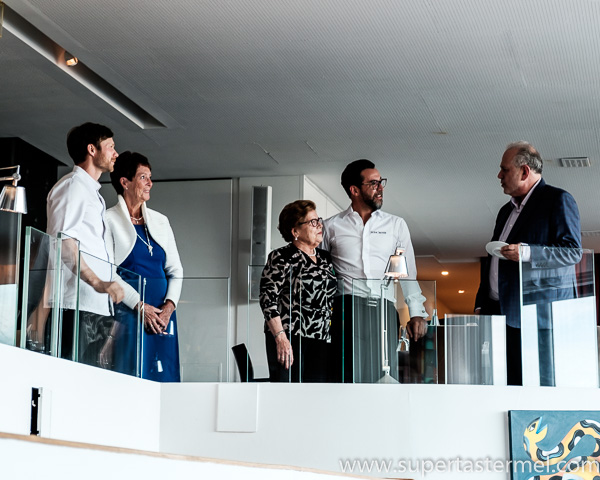 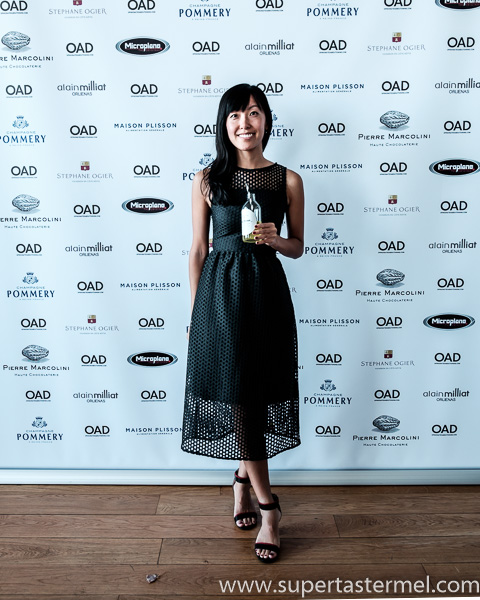 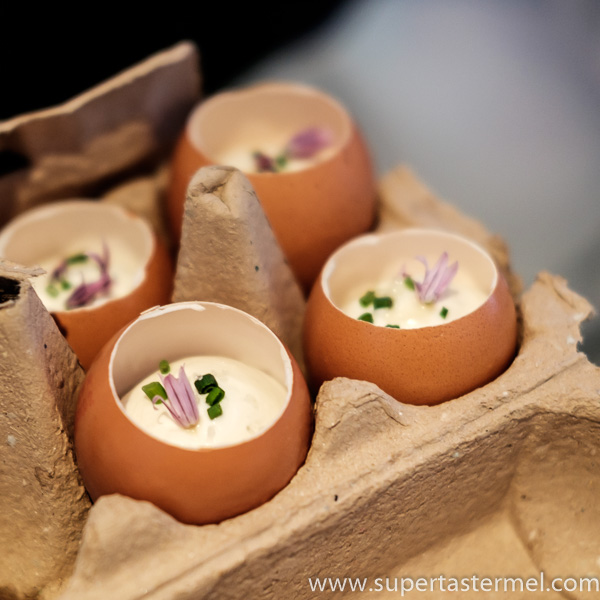 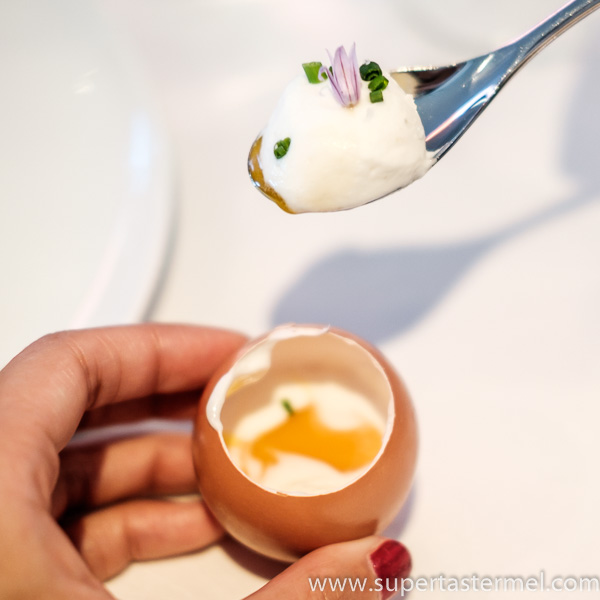 "ln Japan, eating raw fish is very popular. When I was small, my grandfather was a fisherman, so we used to eat raw fish every day. The type of fish my grandmother served depended on what my grandfather happened to bring home with him that day. But my fondest memories are of the days when we ate horse mackerel. I hope you enjoy my interpretation of this dish that gave me such pleasure when I was growing up." 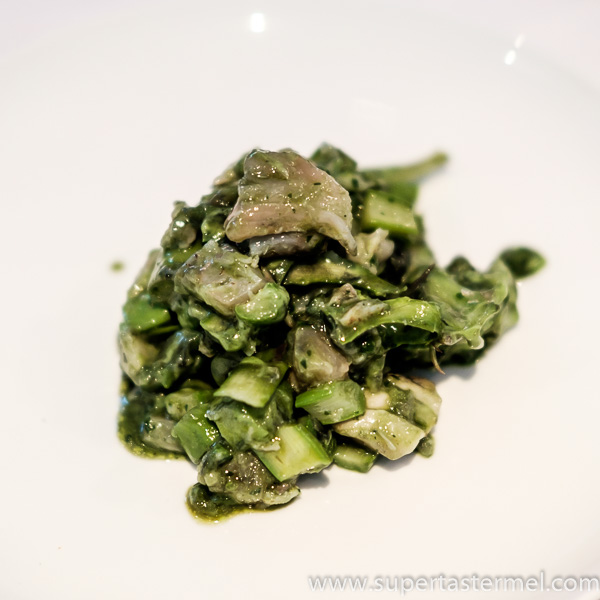 "When I was a child, I used to spend weekends and holidays at my grandparents' farm in Normandy. Much of what we consumed came from the farm, and I often watched my grandparents slaughter the animals (which ranged from cows and pigs to lamb and veal) as needed. My grandmother tried to serve all of the parts of the animal, including the more unusual cuts such as giblets, brains and sweetbreads. Whatever parts of the animal were left over ended up in a terrine, and I have many memories of eating slices of these terrines in their home. So as a way of paying tribute to my grandmother, I have decided today to mix these two practices from their kitchen -- cooking the giblets and making a terrine with the remaining parts of the animal — and have created this terrine of sweetbreads." 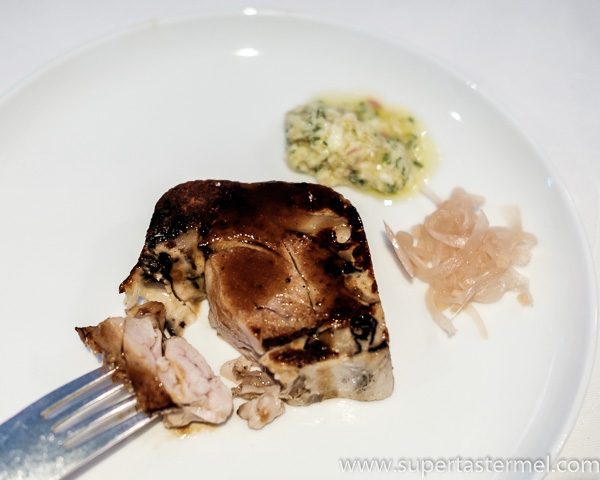 "Codfish served with pepper sauce is rooted in my childhood. My grandmother, Amalia Blanco de Colagreco, brought this dish to Argentina with her when she emigrated from the Basque region of Spain with her parents in 1913. It's a traditional dish, but the combination of the bright colors and simple pleasures it offers makes it appropriate to serve in this era. It was something she cooked for festive occasions and holidays, and whenever I prepare it, it reminds me of the many happy times I spent with her and my family." 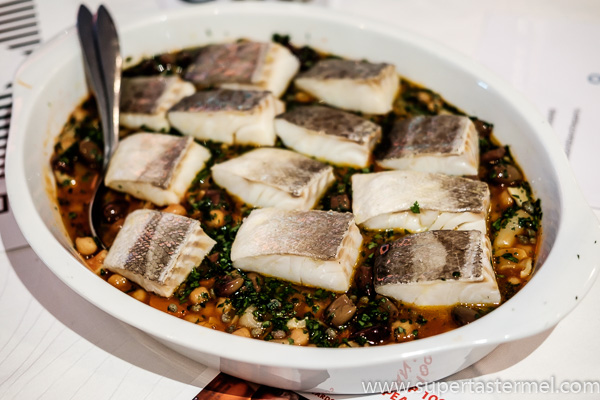 "My dish is an homage to my grandparents. My grandfather used to be what we call a marin-patate (sailor-potato). This name was given to the men who were living on the island of Noirmoutier and who spent six months of the year working as a sailor and six months farming potatoes. As you can imagine, eating shellfish and potatoes is popular on the island, and my grandmother served dishes using these ingredients quite often. I have fond memories of those meals, and it will give me great pleasure to reinterpret this wonderful family souvenir at this event." 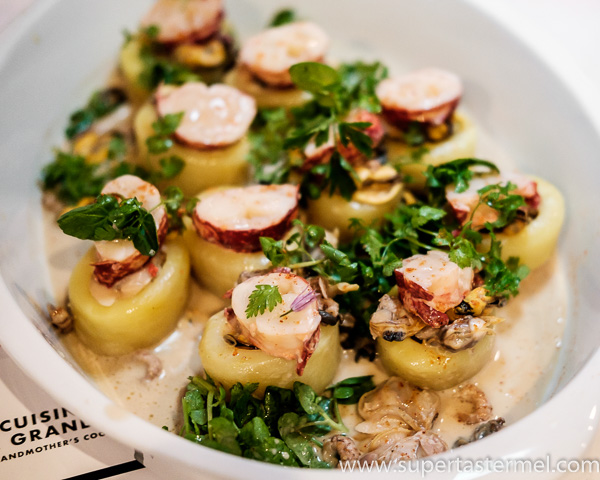 "When I was a child, my grandmother Birgitte was always gathering the family together for meals. Her cooking was — and still is — rooted in traditional Danish cuisine, and her version of stuffed cabbage with pork and horseradish was always a favorite of mine. My dish evolves from those memories, using basically the same ingredients, but prepared and plated in a style which is more my own. My grandmother has always been one of the greatest supporters in my personal and culinary life, so I am extremely grateful to be able to share the preparation of this meal and a visit to Paris (a first for my grandmother!) with her." 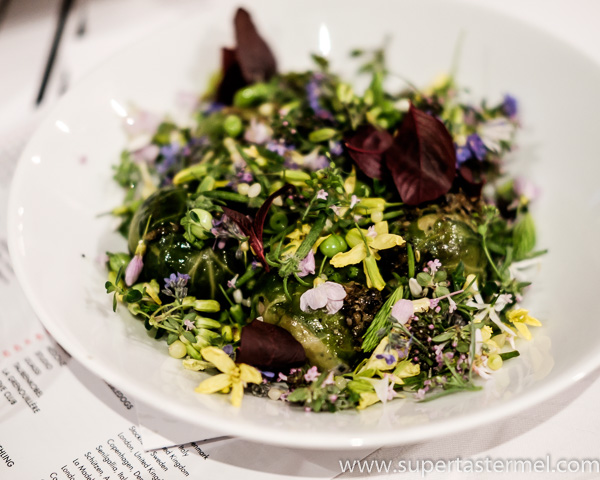 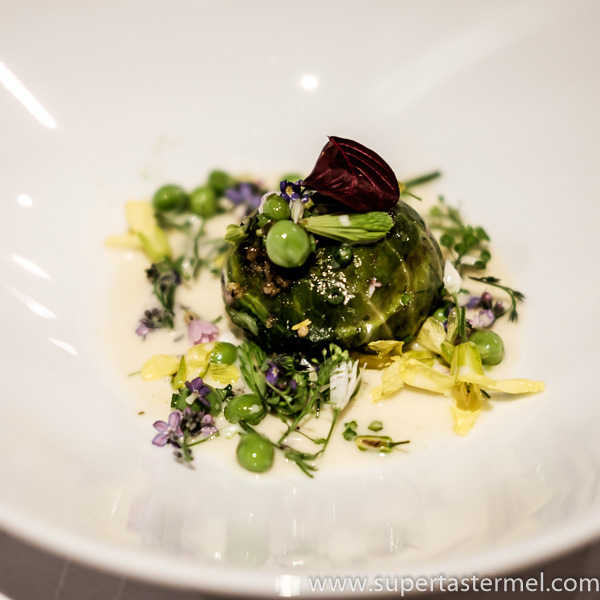 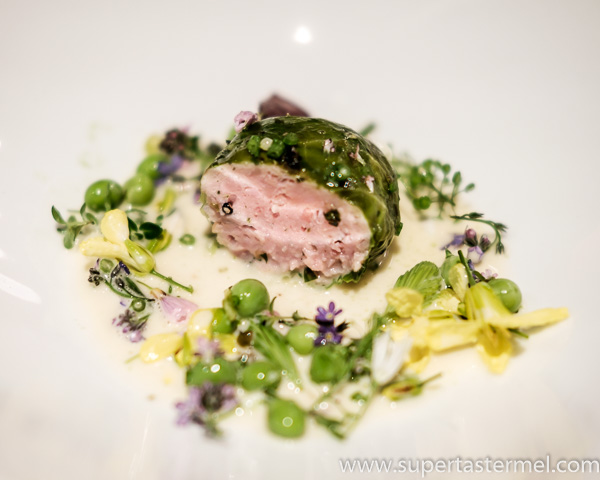 "The British brought curry to Japan during the Meiji period 1868-1912. Over the next 100-plus years, the dish came to be known as "rice-curry," and it has become one of the most popular meals in the country. The type of protein used can vary — it can be chicken, pork, beef or seafood — and these days there are many restaurants dedicated to serving curry dishes. My grandmother used to cook chicken curry for our family on a regular basis. It will give me great pleasure to be able to cook this wonderful family meal with the expertise and technical skills that are possessed by my team at Passage 53." "I was born in Grisons, the easternmost Canton in Switzerland. The name of the region is derived from the town of Vrins, located 1448 meters above sea level with a population of 355. Most people speak Romansh, and Caminada is a very common name in the region. The canton doesn't have much wealth, so many of the local dishes include potatoes, flour and cheese and are intended to be nourishing. I have fond memories of my grandmother cooking these dishes for our family, where the tradition is to hand these recipes down to the next generation. It will give me great pleasure to hand them down to my sons when they get older. 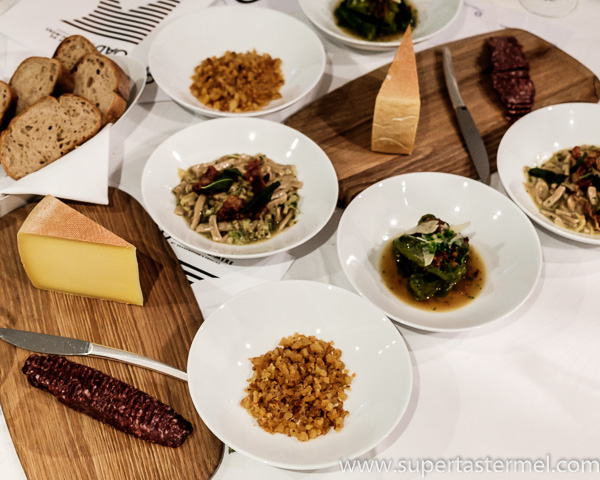 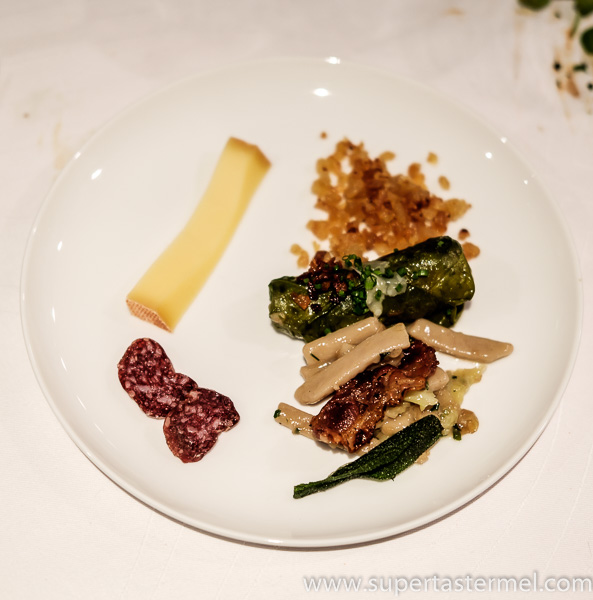 "I was born in the Extremadura region of Spain. It is a rural and mountainous part of the country, and most people earn their living raising goats and sheep. Lamb stew is a typical family meal, and it is common for a family to have raised the animal they are eating. My grandmother's version of the dish uses almost every part of the animal, and is browned on a bed of oil, onion, garlic, hot paprika, grated tomatoes, potatoes and pitarra red wine (a typical wine from the mountains of the region). The dish is finished with some crushed almonds, parsley, dry pepper, fried bread, and more wine. Charascnes pepper are served on the side, a peculiarity given that the pimenton de la Vera, used to make the most famous paprika in Spain, comes from the region." 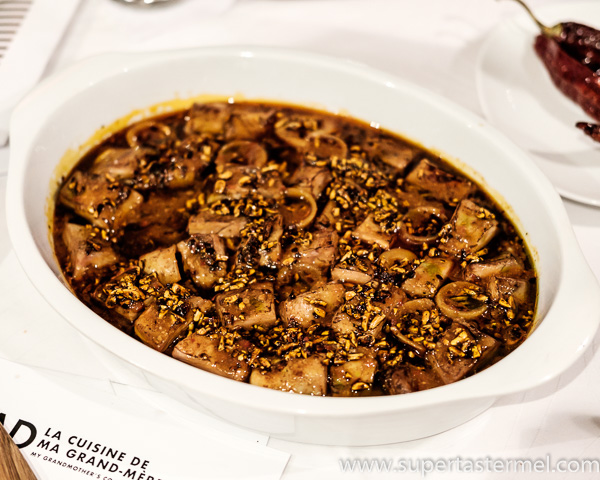 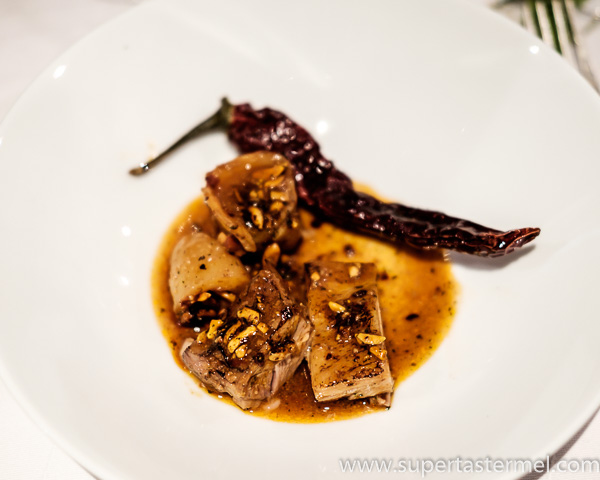 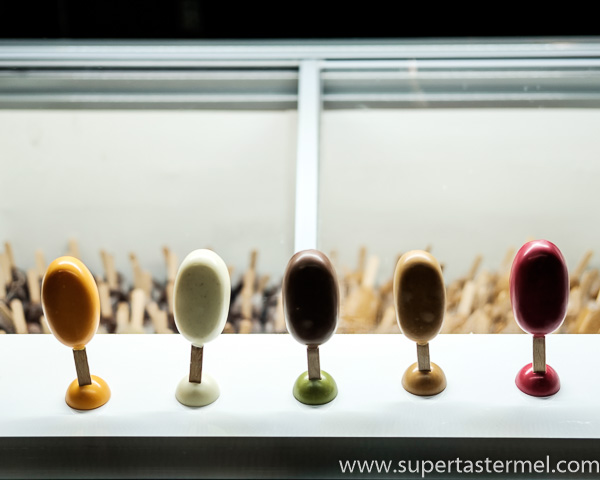 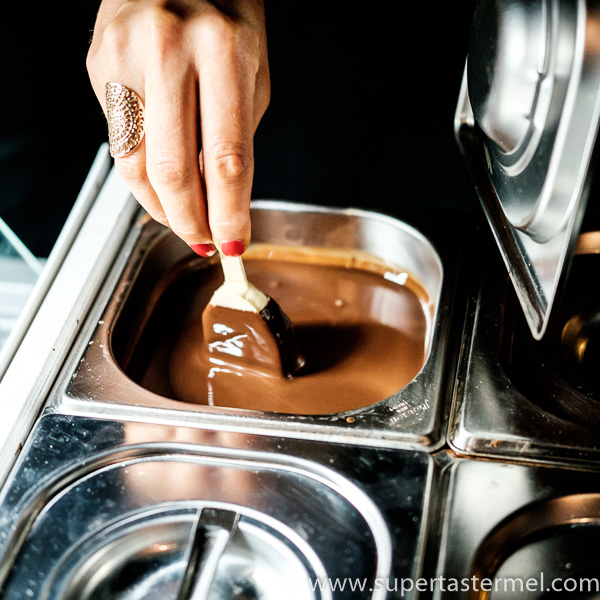 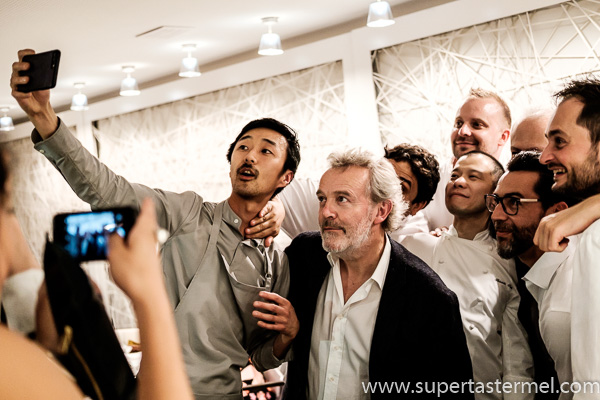 Stay tuned for my coverage on a very special lunch that we had the next day at Alain Passard's private garden in Normandy!