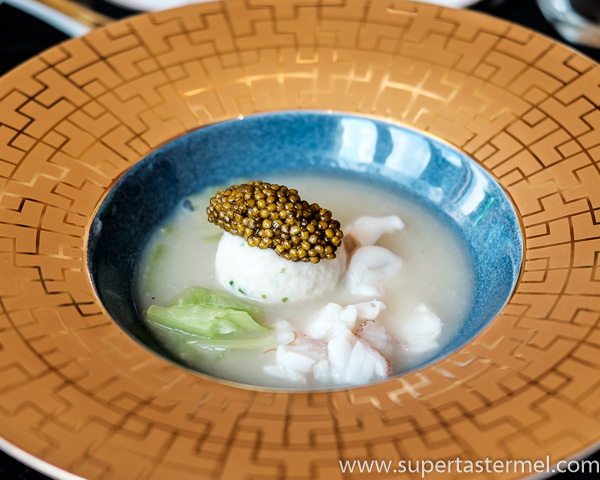 A few weeks ago, I came back from Tokyo earlier in order the join the special RUYI Gastronomy Experience 如意宴 at Wynn Palace in Macau! Inspired by local food writer Agnes Chee's new book “Vanishing Flavors of Cantonese Cuisine 消失中的味道", the experience comprised of 6 traditional Cantonese dishes that have been reinterpreted by Chef Tam Kwok Fung which were then served on elegant RUYI tableware by Legle France to enhance the aesthetics. While the event only happened for 3 nights, the 6 dishes will remain on the menu at Wing Lei Palace - thus helping to preserve the vanishing flavors of Cantonese cuisine. What a meaningful initiative and an opportunity not to be missed if you want to learn more about traditional Cantonese cuisine. 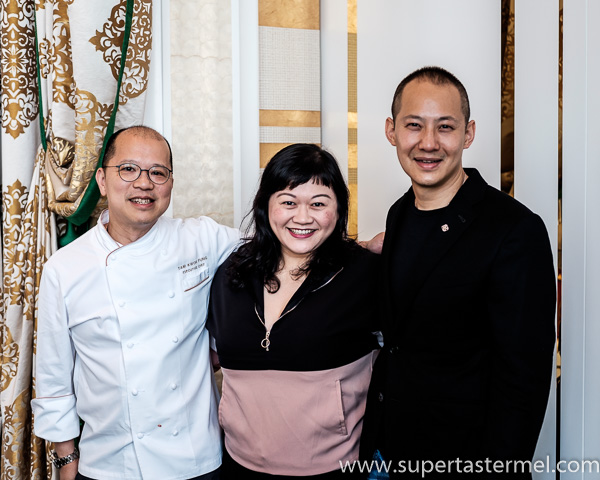 Modern-day Chinese food has mostly been only about the food with little attention to the aesthetics but Desmond Chang, Creative Director of Legle France, wanted to change all of that with RUYI tableware - a contemporary collection designed for Chinese cuisine that perfectly encapsulates the historical designs and culture while preserving the temperature and tastes of the dishes. 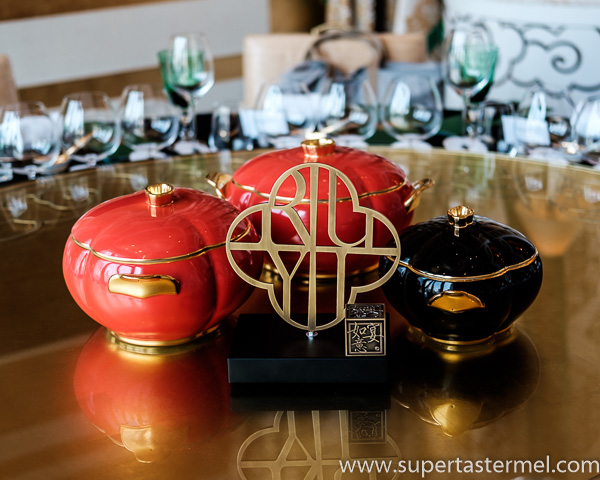 The first dish is Golden-fried Lace Fat Rolls & Scrambled Egg White with buffalo milk cheese (溫故知新 - 網油卷) which is based on the traditional dish using caul fat netting to wrap pork kidney and liver before deep-frying. The dish is not commonly seen on menus anymore due to the complex process of handling caul fat. Chef Tam has reinterpreted the dish here with healthy seasonal ingredients such as the Toyama white shrimp, French blue lobster and crab claw while serving up the scrambled egg white with a twist by incorporating buffalo milk cheese. 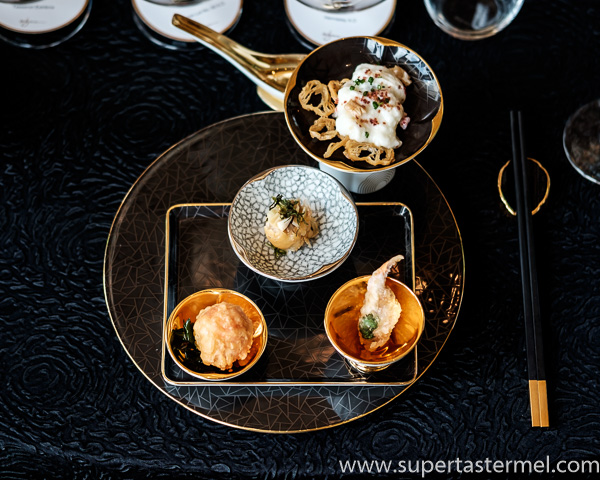 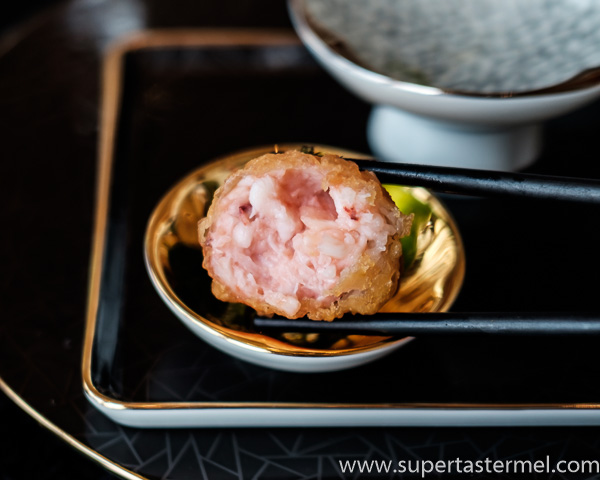 The second dish is the Wok-fried Sea Conch with chicken, gingko, yellow fungus and kale served with ham jus (古今對照 - 雪花雞片). While the dish may look simple, it actually requires expert temperature control as the conch and chicken need different cooking times but must be cooked together in order to bring the flavors together. 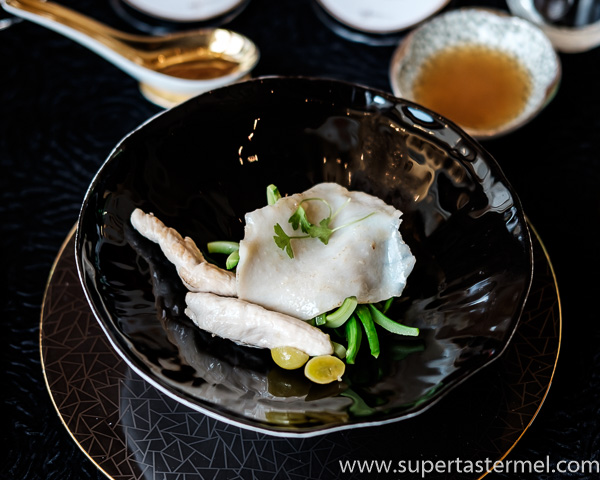 One of my favorite dish was the Dace Mousse Dumpling with grouper fillet, caviar and lettuce in preserved clam rice broth (生財 · 顯貴). A traditional Chinese New Year dish that signifies prosperity, Chef Tam has preserved the essence of the dish while elevating it with a touch of caviar. The flavor of the clam mustard sauce (蜆芥醬) was especially exquisite in the congee - perfectly balanced in its briny ocean flavor and unique aroma.

Another highlight was the Braised Giant Grouper Skin with pomelo peel, kombu and venison tendon (崑崙再現 - 麒麟龍躉皮). Inspired by a dish in the Manchu Han Imperial Feast, the focal point is the skin of a giant grouper - a precious ingredient that requires meticulous cooking to ensure the right texture and flavor. Chef Tam complemented the grouper with several other ingredients from land and sea while tying everything together with a rich and thick abalone sauce. 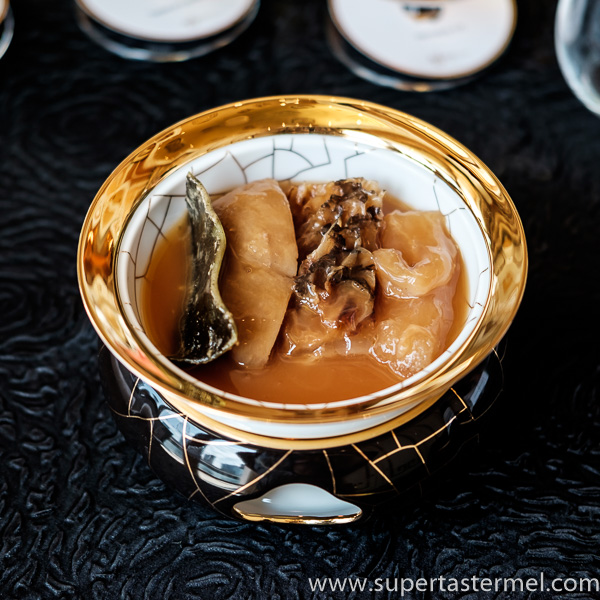 Chef Tam showing us the giant grouper skin while explaining the dish! 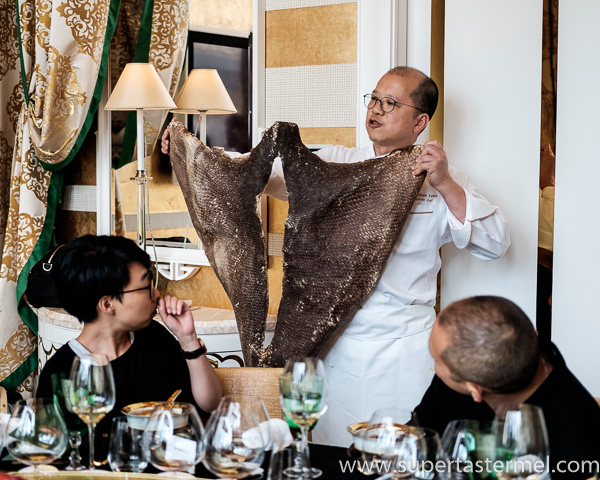 The Lamb Cheek and Shank Soup with tossed Hoi Fu shark’s fin (羊頭蹄羹，一口魚翅) was a popular dish in the 60’s-70’s prized for its collagen-rich benefits, but fell out of favor due to its complex preparation. Chef Tam reinterpreted the dish with the cheek and shank of the lamb which is slow-cooked for hours with white pepper and galanga. The soup is paired with simmered shark’s fin - to be eaten separately or together with the soup. 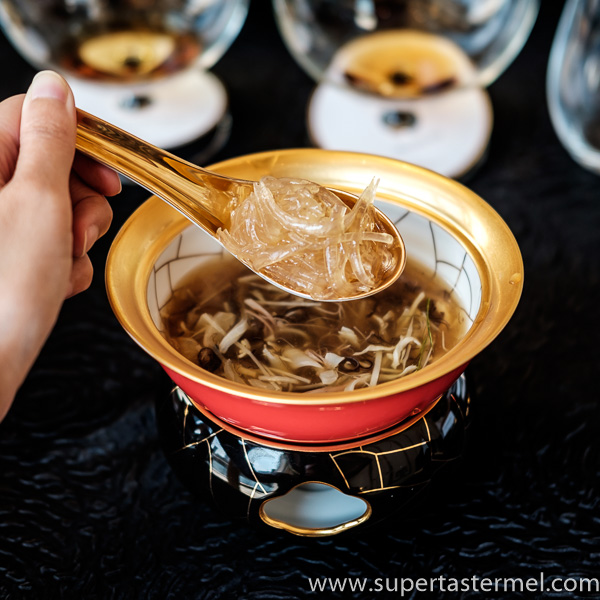 The last dish is a delightful dessert - Pear and Chuan Bei Soup with Deep-fried Almond Puff (戈渣). The deep-fried custard puff is originally a savory dim sum but Chef Tam presented it as a dessert instead with almond tea as a basis. What a lovely rendition of a classic dish and another favorite of the meal! 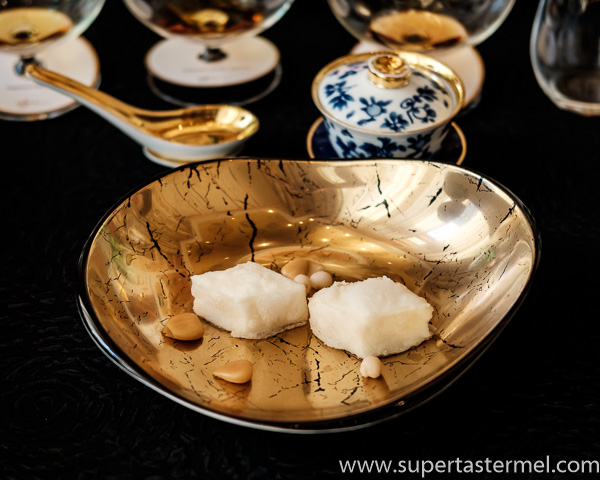