'Brighten Up Your Day' with the Cath Kidston x Feast afternoon tea at EAST hotel in Tai Koo! Available for a limited time only from March 24th to May 18th, celebrate spring by having afternoon tea with British designer Cath Kidston's vintage and colorful floral pattern china. Also featured is Penney Pang, an award winning cake designer who crafted the desserts of the afternoon tea set. Prices are very reasonable at $228 for 2 on weekdays and $195 per person on weekends. 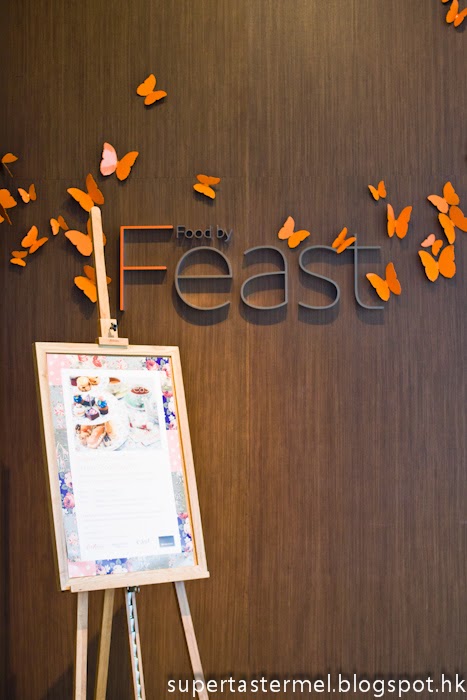 The menu was a delight to look at from the start with its bright and vivid designs! 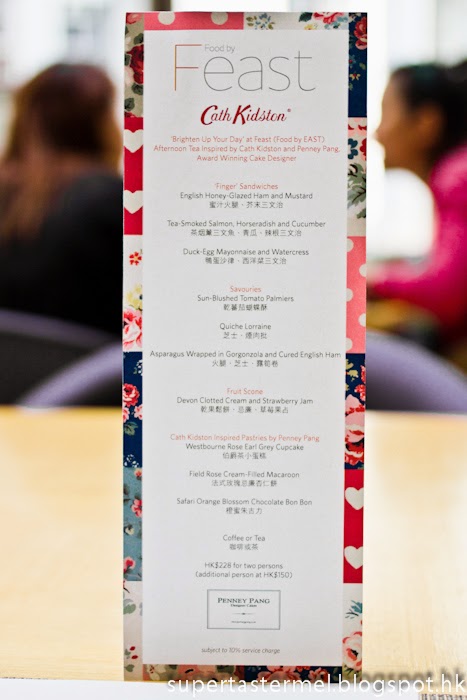 Our 3-tier afternoon tea set came out shortly after our order using a cake stand from Cath Kidston's Bird collection. The vintage patterns were beautiful to look at and we couldn't stop taking pictures of it while exuding "oohs" and "aahs" in between! 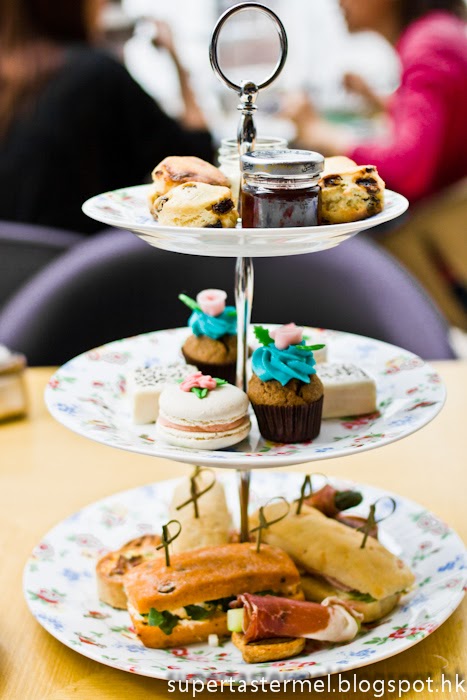 On the top tier was the raisin scones with Devon clotted cream and strawberry jam. The clotted cream was disappointingly solid and not soft at all while the strawberry jam was fragrant and appetizing. The scones were acceptable but not the best that I've had. 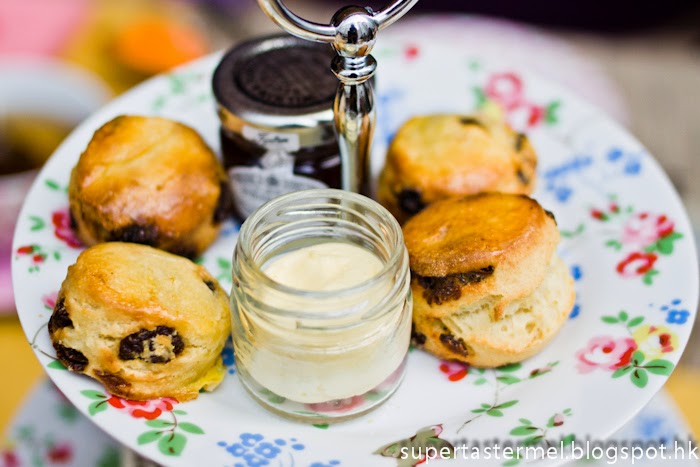 We then moved on to the bottem tier where the finger sandwiches and savories resided. Of the 3 sandwiches in the set, I was most impressed with the tea-smoked salmon with horseradish and cucumber as one can't really go wrong with salmon and the pairing with horseradish was pretty interesting. The English honey-glazed ham and mustard sandwich tasted rather plain and stale, reminding me of the sandwiches you can get at convenience stores. The duck-egg mayonnaise and watercress sandwich was just average as well.

Of the 3 savories, the quiche lorraine was the most memorable as the flavors and textures were better that I'd expected. The sun-blushed tomato palmiers sounded appealing but I couldn't taste any tomato flavors at all. Finally, the asparagus wrapped in Gorgonzola and cured English ham tasted as expected but nothing impressive. 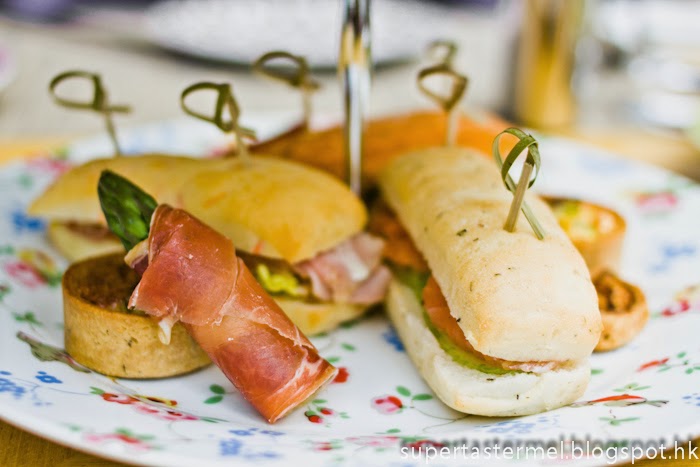 Moving on to my favorite part of tea - desserts! The pastries were charming to look at especially with the handcrafted sugar flowers on top of the cupcake and macaron. The Westbourne rose earl grey cupcake was a bit dry without any hints of earl grey flavor but the blue cream on top was surprising tasty as it was very tart! The Field rose cream-filled macaron was delicious with its chewy shell and not-too-sweet filling. The safari orange blossom chocolate bon bon was really dense and heavy though. It was way too sweet and would have fared better if the size had been cut in half as I couldn't finish it all. 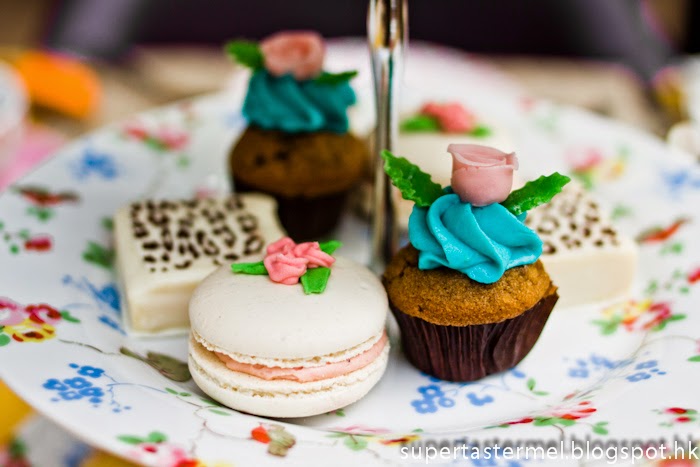 The afternoon tea set came with tea as well, but the choices were rather limited with only English breakfast, chamomile, or earl grey. We were told that English breakfast tea would go best with the food so that's what we chose. The tea was brought out with tea cups and teapot from the awesome Provence Rose collection! They were so cute to look at - now I really want a set for my place! We were given a teabag so we just poured the hot water from the teapot ourselves. The tea wasn't that strong though and not that special compared to other afternoon tea places in town. 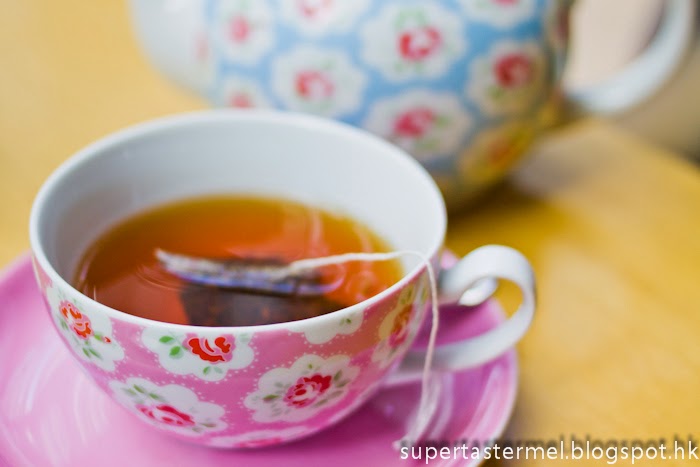 Towards the end of our meal, we were given a complimentary Cath Kidston rose hand cream and a 10% discount coupon! I'm usually averse to the smell of lotions, but the smell of the hand cream was subtle and delicate. 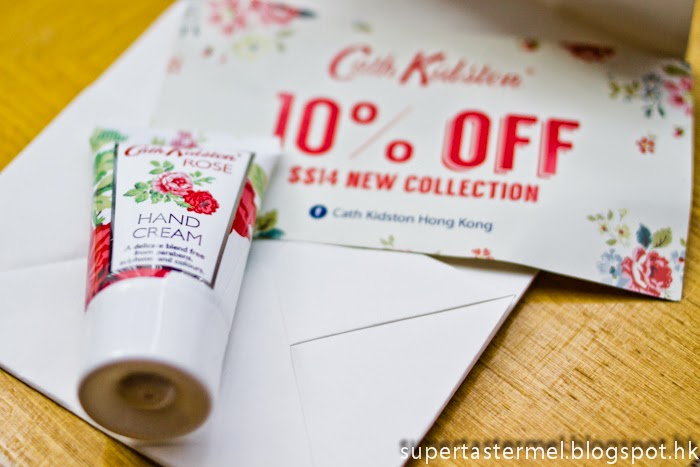 Overall, the afternoon tea at Feast is a pretty good deal for the price and a great way to spend an afternoon if you happen to find yourself on the east side of Hong Kong island. Perhaps after a visit to the Island East Market on Sundays, which is starting again in April!