Gonpachi, aka the "Kill Bill" restaurant, is running a Red Hot Summer Tuna Promotion featuring 3 kinds of tuna (yellow fun, blue fin and bincho) until August 31! To complement their new dishes, the restaurant has also paired up with the famous Japanese Hakutsuru brewery (白鶴酒造) to offer sake and plum wine, and I was lucky enough to visit when the representatives were here in Hong Kong and they offered everyone free sake! 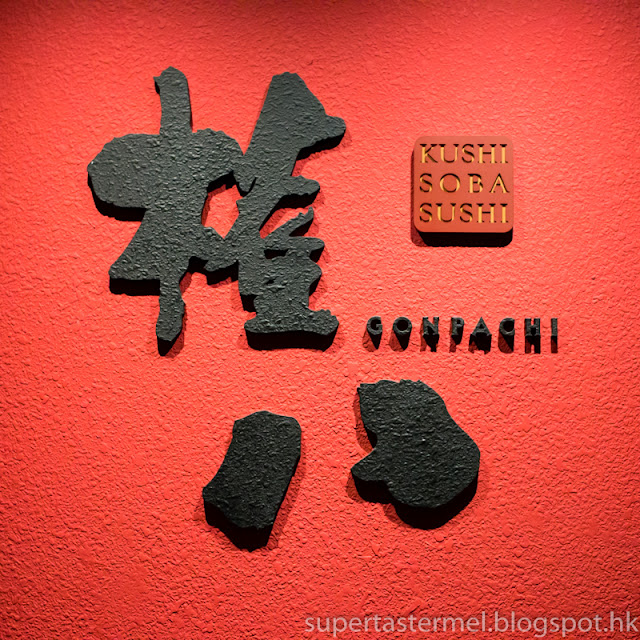 They had a sake breaking ceremony (kagami bikari) where they broke open the wooden sake barrel with hammers and proceeded to treat everyone to a cup of free sake in small wooden boxes. 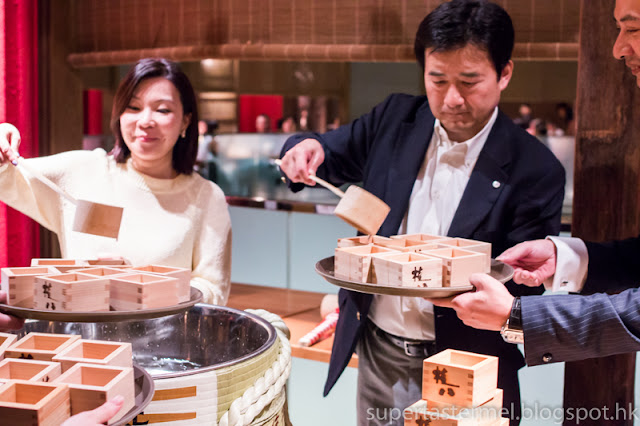 One of the sake we tried that night was a very special frozen sake! The Hakutsuru Mizore Nama Sake ($108/300ml) is a must-try as it was aged for a month in 41F degrees before bottling. After a few shakes, the ice particles formed in the sake as seen and is ready for consumption in its light, smooth and refreshing state - perfect for summer! 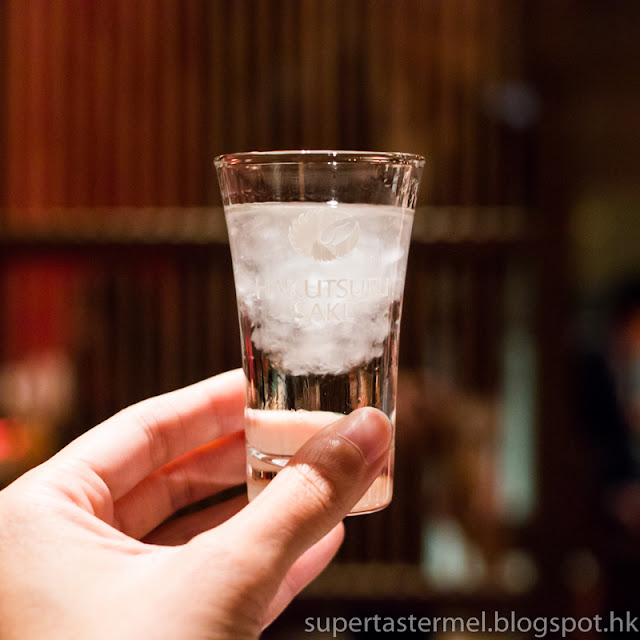 We started off with the refreshing Yellow Fin Tuna Carpaccio ($248) with thinly sliced tuna with fennel, lettuce, tomato, radish and capers. The tuna was light and tart which was great as a starter to whet our appetite. 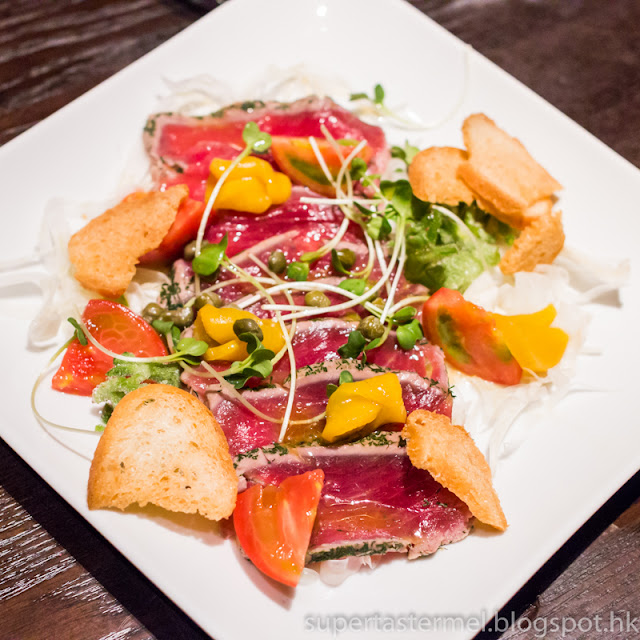 The Rice Paper Roll with Tuna ($138) seems to be a nod to its Vietnamese neighbor An Nam with fresh rice paper rolls filled with yellow fin tuna, shrimp, cucumber, radish and soy. It was an interesting combination but needed more tuna to bring out the flavors. 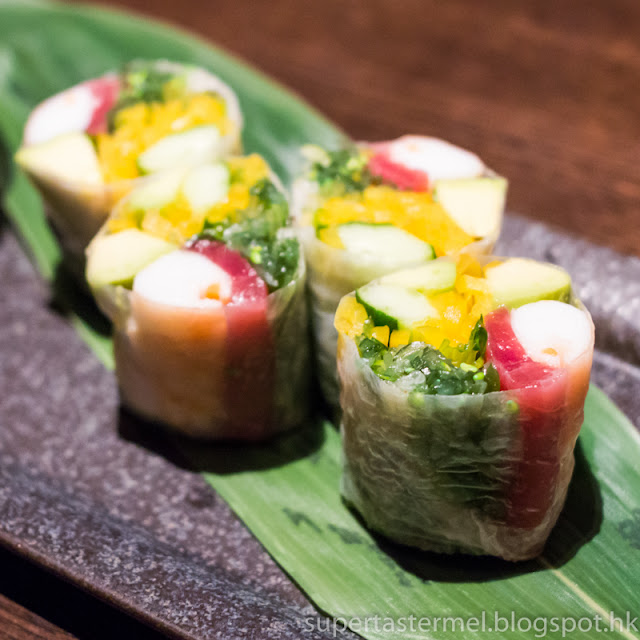 The Blue Fin Tuna Trio ($268) was exciting to try with tuna sashimi, tuna with spicy mikan dressing, and marinated tuna with dill & sesame wasabi sauce. All three items does not disappoint while I liked the toro and akami sashimi the best. 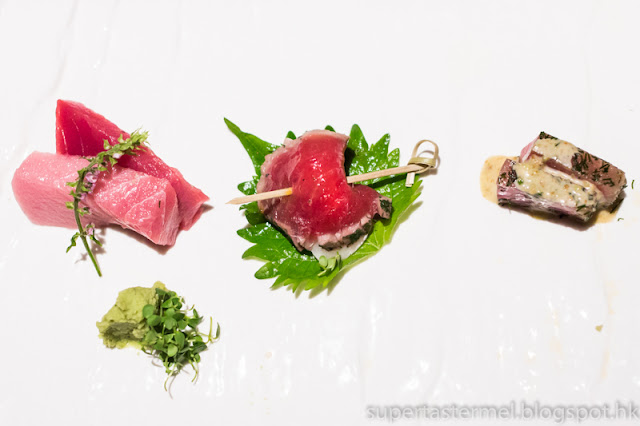 The Premium Assorted Tuna Sushi ($198) had three kinds to choose from: thin layers of toro & akami, seared toro and akami marinated with soy. Since this was hard to share, I only tried the toro and akami sushi with beautiful shades of red and pink which was exquisite to eat with its rich flavors of tuna. 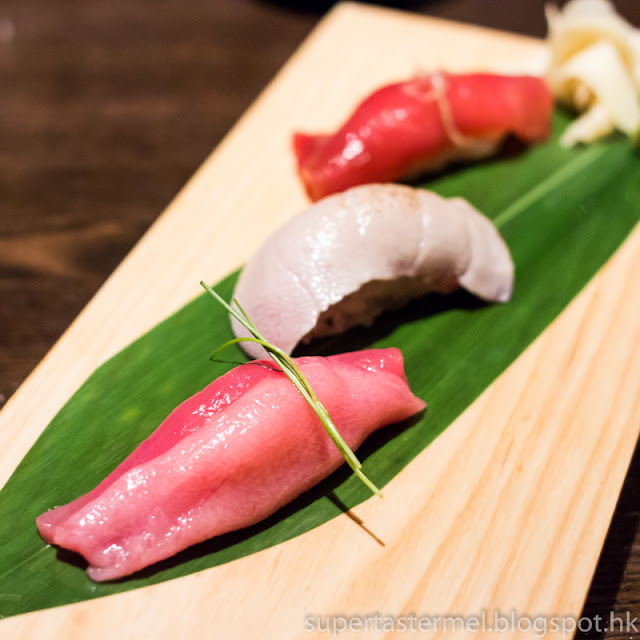 Honestly this fatty Toro just melted in my mouth and I'm still dreaming about it! 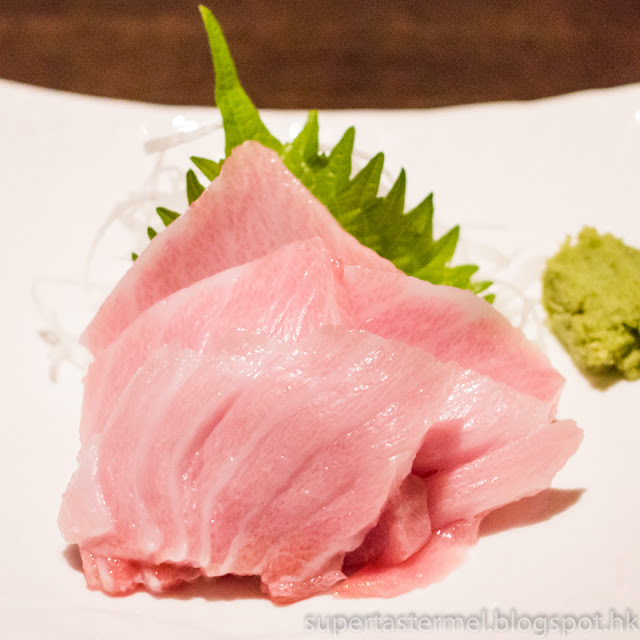 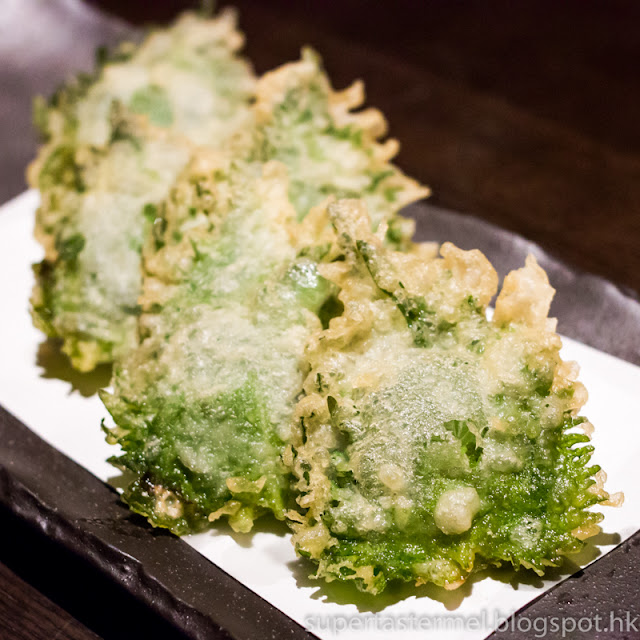 For our veggies of the day, the Vegetable Dipping with Tuna Paste ($168) came to the rescue with fresh vegetables sticks served with chopped tuna blended with Caesar dressing, tuna jelly and onions. 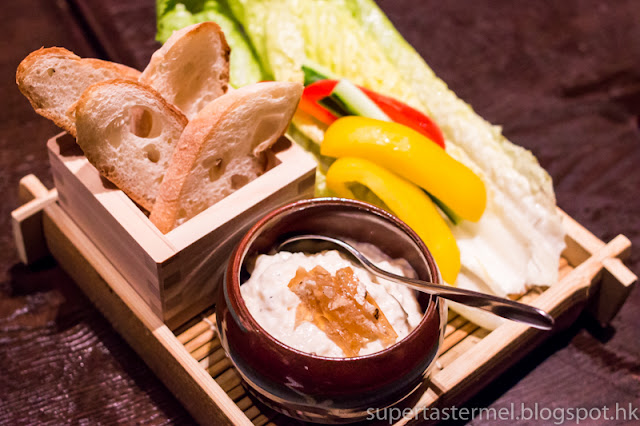 The Tuna Pizza with Fresh Tomato Paste ($108) was a crispy tuna pizza topped with shishito peppers, chopped onions, capers and sesame. While I appreciate the creativity, I didn't think this dish brought out the flavors of tuna as well as the other dishes though. 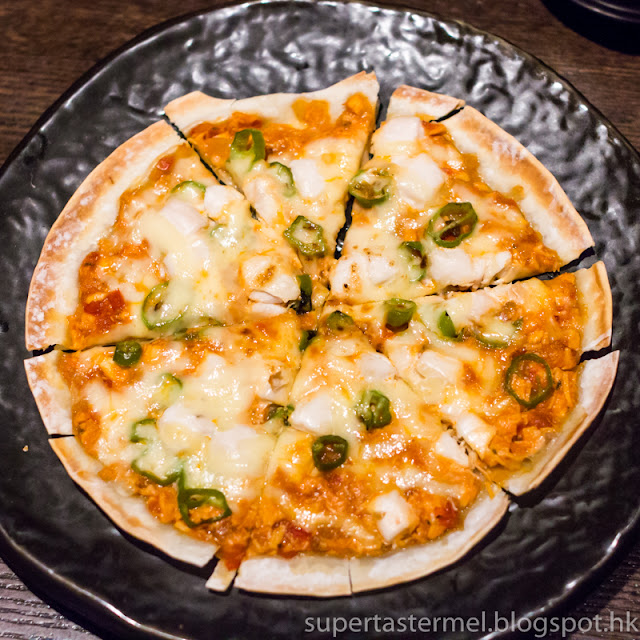 On the other hand, I really liked this Char-grilled Rice Sticks with Tuna ($58) which was grilled over real charcoals (I checked as I happened to past by the grill station as I was walking in)! The rice sticks mixed with yellow fin tuna was delicious to eat with a sweet soy sauce glaze on top of its crispy exterior. 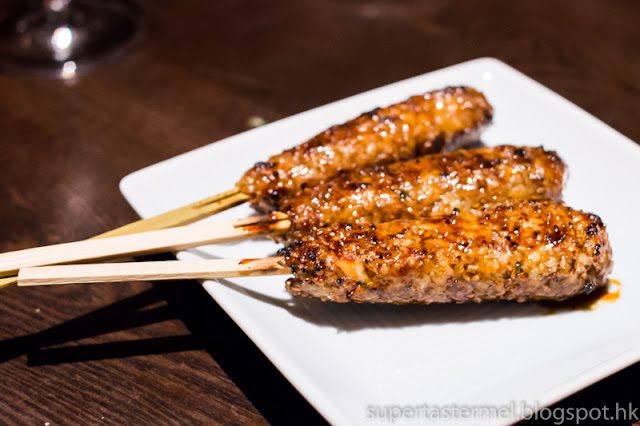 We also got a special treat with this deliciously fatty Grilled Tuna Jaw! I'm usually not a fan of fish jaws in the first place but this tuna jaw looked so tender and juicy I just had to try it, and it was perfection! My mouth just watered looking at this again. 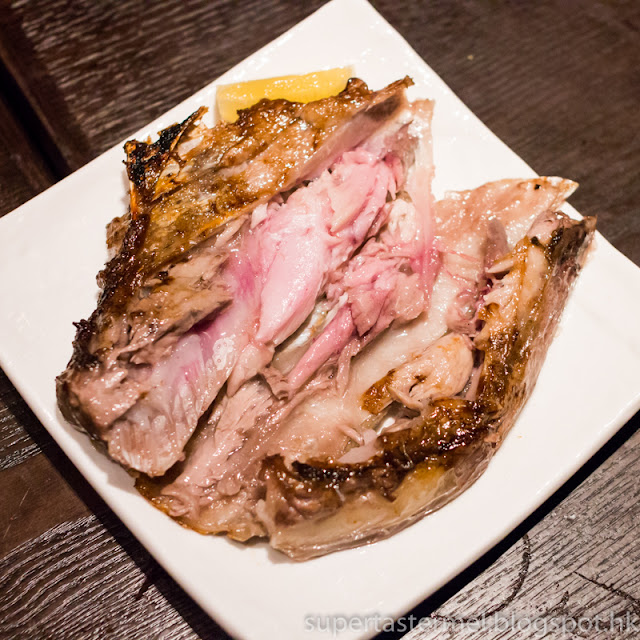 The last of our savory dishes was the signature Seiro Soba homemade cold buckwheat noodle with dipping sauce and green onions. Sometimes simplicity is the best and the springy soba was satisfying to eat after our tuna feast. 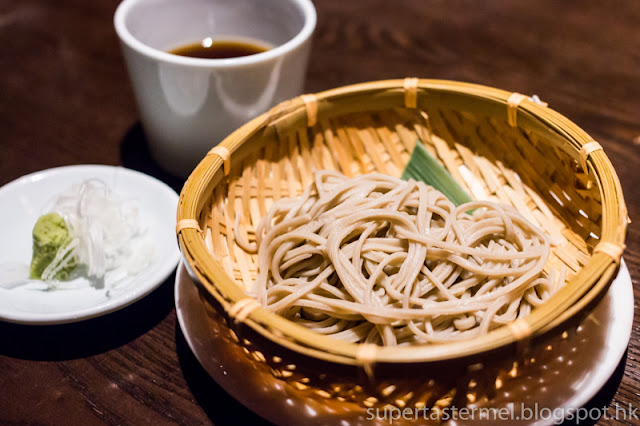 Finally we ended our evening on a sweet note with a very juicy honeydew melon! 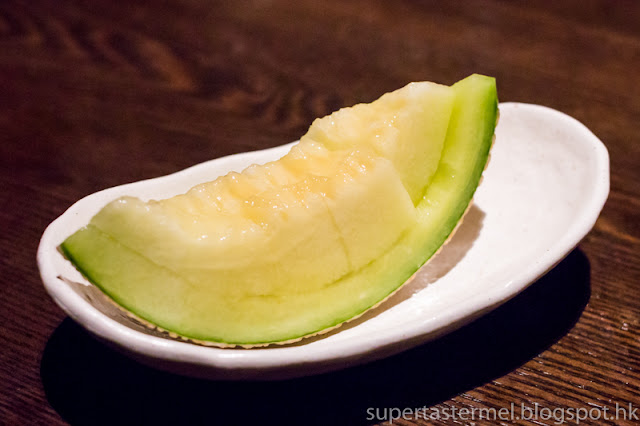 Verdict - two words: tuna, sake - what are you waiting for!