Shhh it's a secret! Okay okay it's not so much a secret than a high end private dining club that is located in the seemingly remote neighborhood of Lai Chi Kok for us folks from the HK island side. Inspired by the roaring 1920s, Greater China Club aims to stimulate your 5 senses with food, wine, art and music! The good news is that the restaurant is open to the public as well but by paying a one-time joining fee of $6888 and becoming a member, you get to enjoy the lower member prices on the food while part of the joining fee serves as dining credit back at the club. You'd also get dining vouchers to restaurants owned by the same owner such as Umai, Yayakiya and Rustico which is where I had an awesome white truffle meal last year!

When I arrived on the 10/F of D2 Place, I stepped off the elevator to find two closed red doors at the entrance of the club which required ringing a doorbell in order to be let in. Once inside, I was transported to a rustic and yet modern restaurant with black and gold color schemes which is decorated by Chinese art pieces throughout. There were many private rooms in the club which avoided the usual pitfall of noisiness at Chinese restaurants and offered more privacy to diners. I was excited to try the food which is traditional Cantonese cuisine and helmed by the former executive chef at the 3* The Eight in Macau. 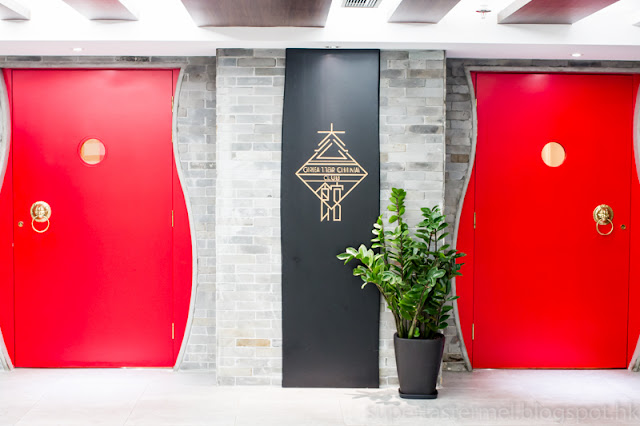 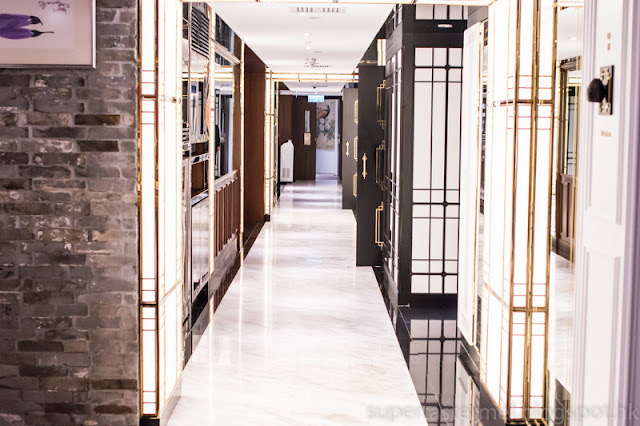 True to its motto, we were serenaded with live music on traditional Chinese musical instruments while we enjoyed our food. 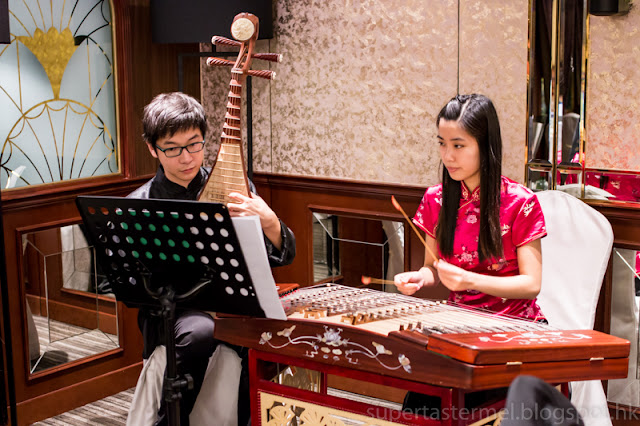 Cold Silky Fowl "Sichuan" Style | 川味口水竹絲雞 ($118/$108) - I love spicy food and have eaten my fair share of Sichuan style chicken in HK but it was my first time trying it with silky fowl! Silky fowls are used to make soup mostly in Chinese cuisine and it is believed to have great health benefits especially for women and the elderly. It didn't taste different than a regular chicken but I just thought it was an interesting and healthy choice to use silky fowl instead in this dish. 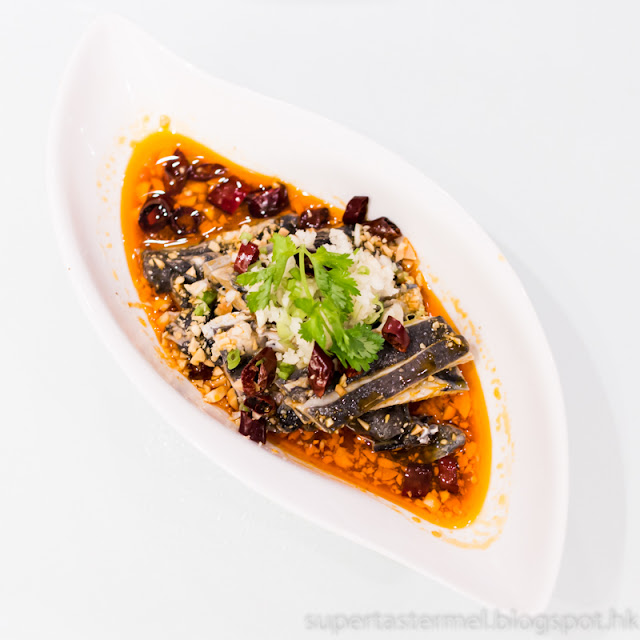 Jelly Fish With Black Vinegar | 涼拌海蜇頭 ($132/$118) - one of my all-time favorite appetizers - jellyfish! The jellyfish was chunky and very snappy while the vinegar had the perfect balance of sweetness and tartness which made it very appetizing to eat. 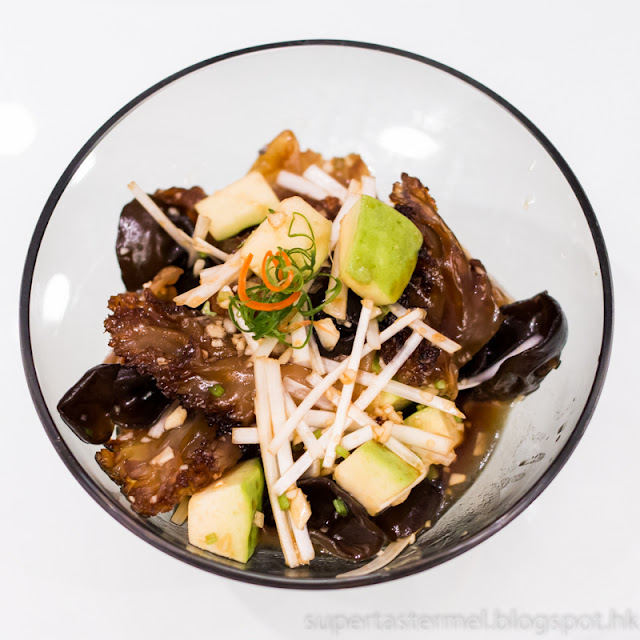 Cold Abalones With Pomelo | 清香柚子凍鮑魚 ($188/$168) - the cold abalones arrived floating on a pillow of fog and they tasted just as light and refreshing as they looked! 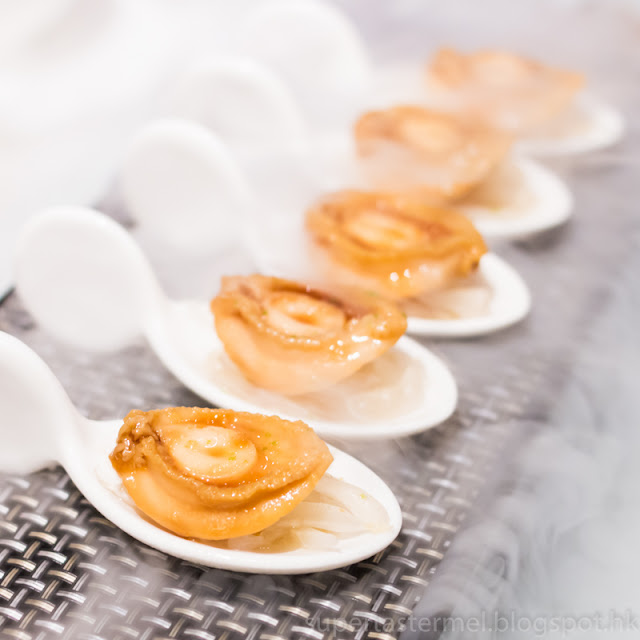 Barbecue Prime Iberico Pork | 招牌黑毛豬叉燒 ($278/$248) - another place that uses Iberico pork to make char siu and it had great meat to fat ratio here with a supple texture while the sweet honey glaze hits the spot as well. Now if only there was more charcoal aroma like my favorite joint in Chai Wan, this would have been a home run. 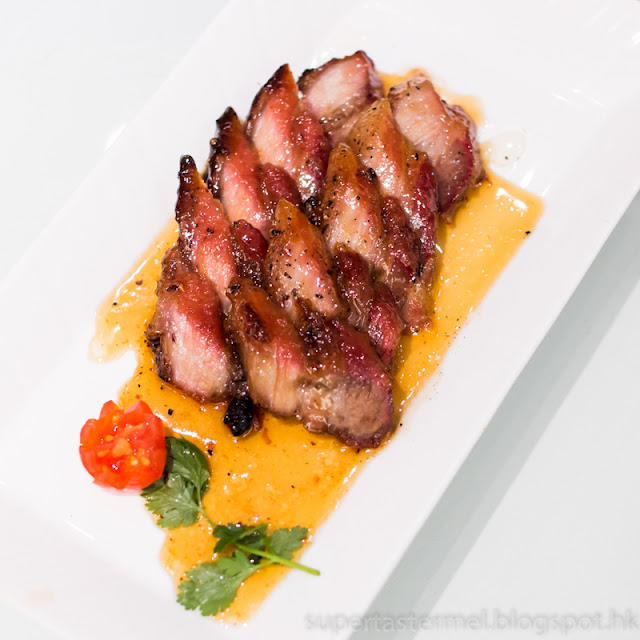 Roast Goose Served With Plum Sauce | 明爐燒鵝 ($688/$628) - the roast goose had a super crispy skin that was simply irresistible! It's so hard to find roast goose with crispy skin nowadays (most are soft because it's not freshly made) and the goose was just luscious here with a perfect layer of fat between the skin and meat. 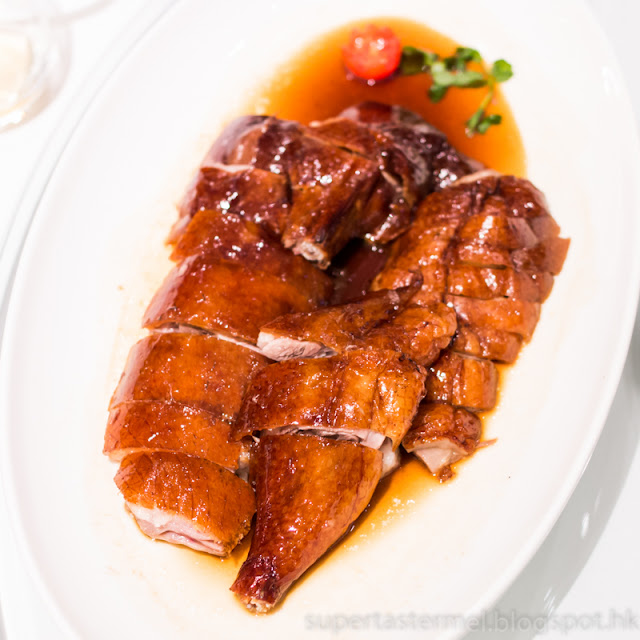 Minced Spotted Grouper Thick Soup | 家鄉生拆魚茸羹 ($152/$138) - I'm not a fan of fish soup in the first place but this was amazingly delicious with fresh and umami flavors! 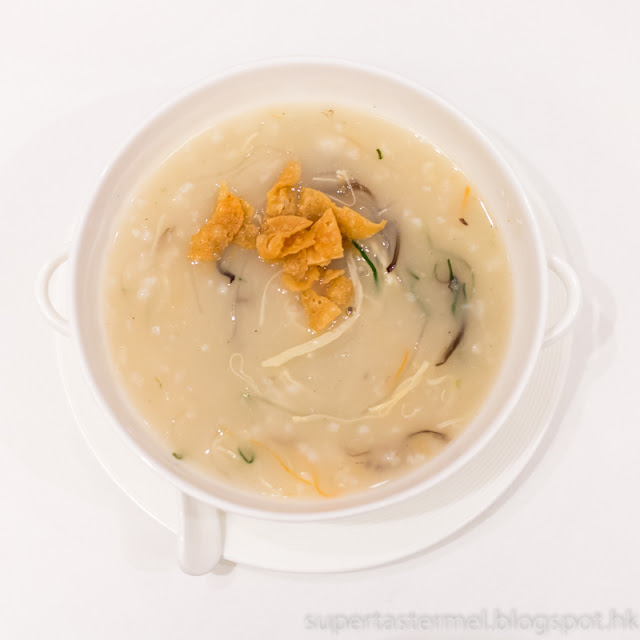 Crispy Pork Ribs | 特色脆皮京都骨 ($218/$198) - I love sweet and sour pork and I wasn't sure what to think of this at first as it looked like a big and dense pillow, but the super crispy batter was actually a bit hollow inside as the meat was not filled all the way so the ratio ended up being just right. The sweet and sour sauce was on point as well! 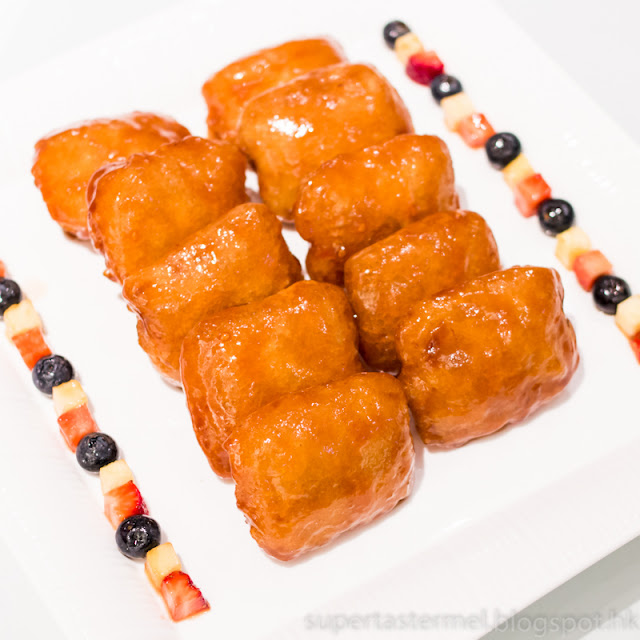 Poached Seasonal Vegetables With Spanish Ham In Rice Soup | 西班牙火腿米皇浸時蔬 ($188/$168) - instead of Jing hua ham, Spanish ham was used instead which was another interesting take on a traditional dish. The flavors were appropriately light but I wasn't so hot on the rice soup and would have preferred chicken stock instead. 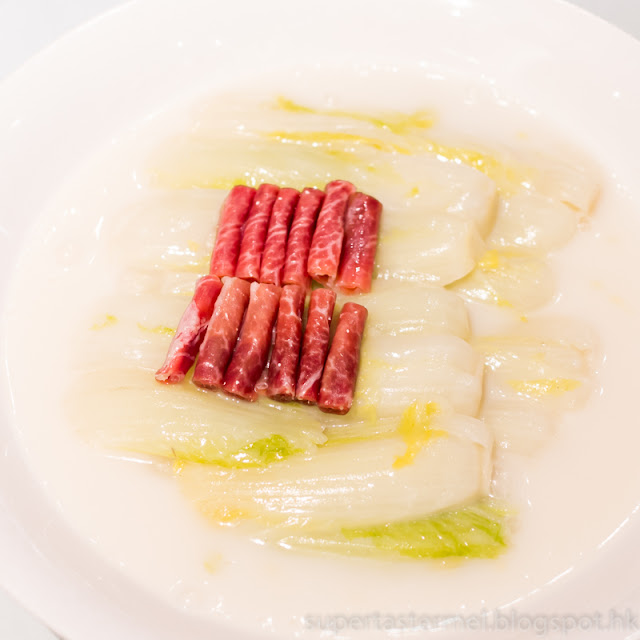 Roast Suckling Pig With Rice | 化皮乳豬 - this is the signature dish from the 3* The Eight in Macau and it was definitely the highlight of the meal! The suckling pig had perfectly crispy skin and tender meat which was stuffed with flavorful glutinous rice that would have had me going for seconds if I wasn't stuffed already. 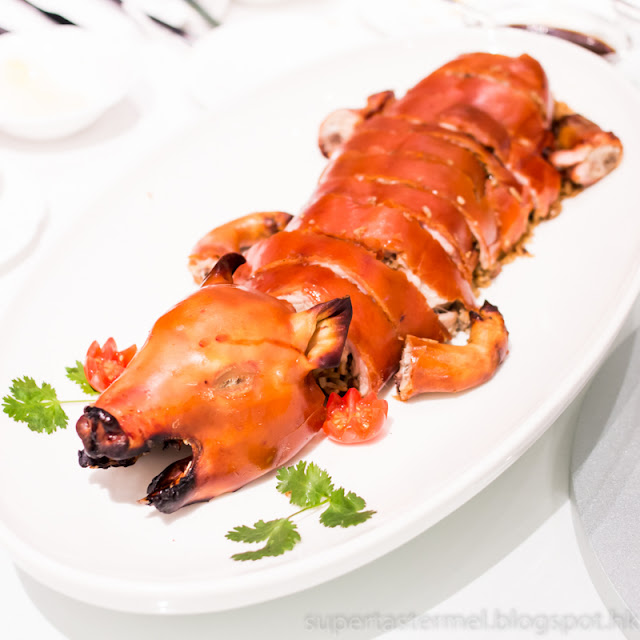 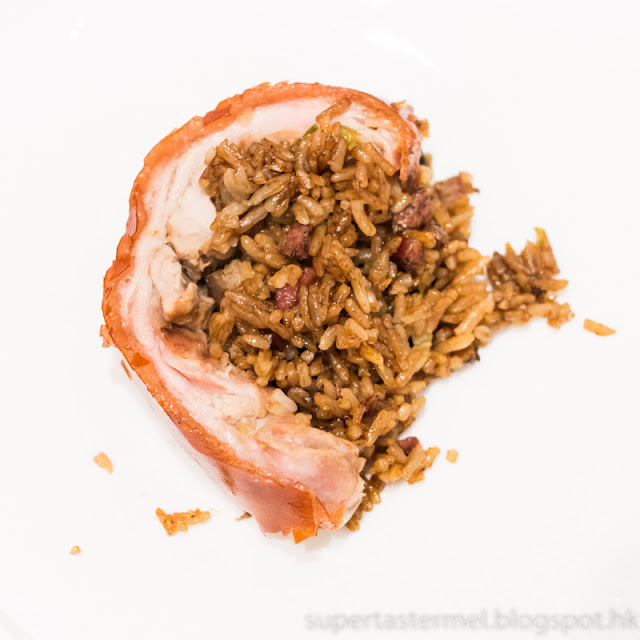 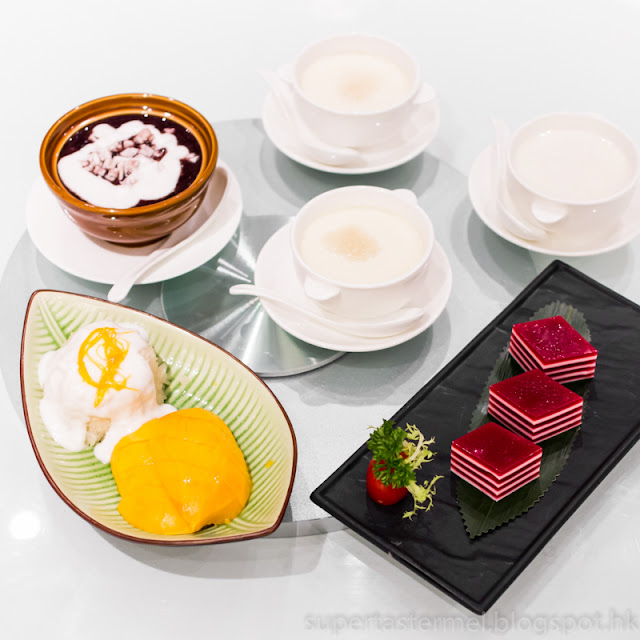 I actually went for the Hot Ginger Souffle with Ginger Sauce ($62/$55) even though I'm not a fan of ginger but that was the recommended flavor (though you can choose other flavors as well). The sauce was a bit thick with bits of sweetened ginger and I actually thought it wasn't gingery enough while the souffle was perfectly light and fluffy though. 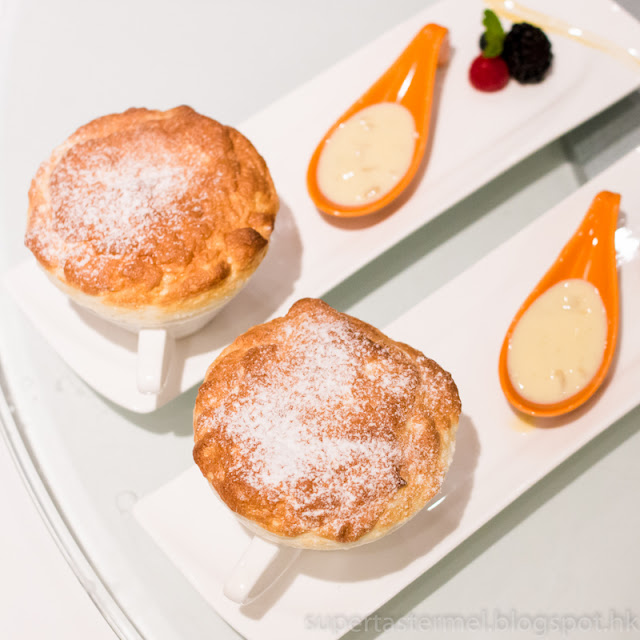 After our meal, we took a tour around the club and checked out the lounge where guests can play their own vinyl records while sipping on drinks. We then walked up a stair case filled with pop art to check out the terrace upstairs. 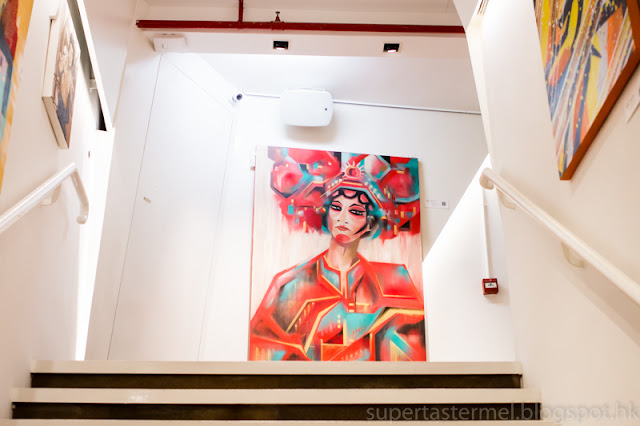 Who would have thought that this beautiful garden terrace exists in Lai Chi Kok! 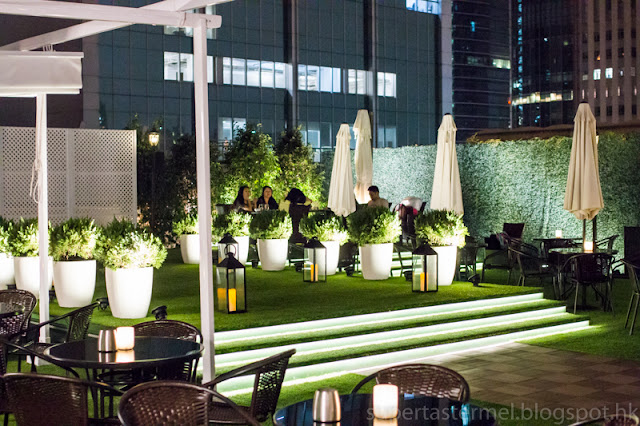 Verdict - I thoroughly enjoyed my dining experience at Greater China Club which delivered exquisite Chinese cuisine in a classy environment filled with art and music. I would love to go back to sample their dim sum which is managed by an ex-chef from the 3* Lung King Heen!