It was a train wreck happening in slow motion and I was powerless to stop it - that was how I felt mid-way through my meal at Twenty Six by Liberty which has replaced Liberty Private Works where I had one of the best dining experiences in Hong Kong. Helmed by chef Bjeorn Alexander of Whisk at The Mira, this restaurant wasn't on the top of my list of restaurants to try initially but since my friend had an existing reservation already, I decided to accompany her for dinner when her date couldn't make it. The interior hasn't changed much as it still had the U-shaped counter table which can seat up to 26 people and even the price stayed the same at $900 per person for the 10 course degustation menu, but the experience I had this time around was vastly different from before and in a bad way.

Our meal started off with a lot of potential when we were presented with the first of our trio of amuse bouche where the smoked eel and caramel candy with pepper gave us a glimpse into the chef's creative culinary vision and focus on combining unique ingredients. The wrapping was edible and when we popped this into our mouth, a fusion of sweet, savory, smoky and spicy deliciousness was released which very much whetted our appetite and excitement for the rest of the meal. 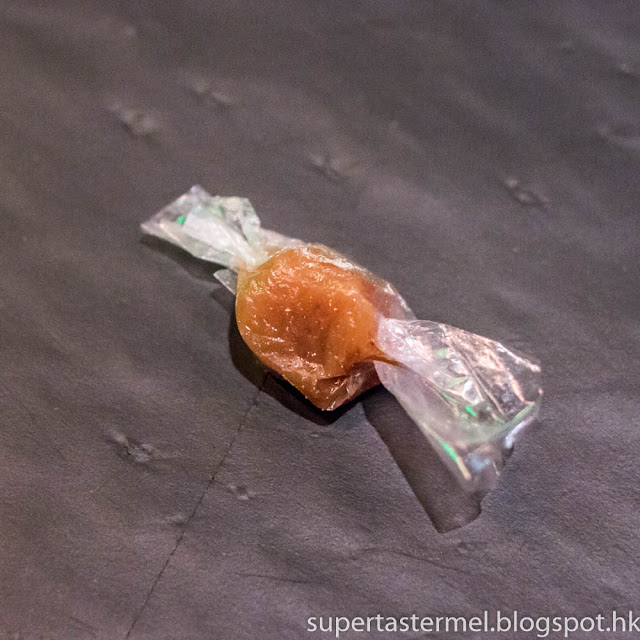 Our second amuse bouche was a French toast with peanut butter and winter truffle which was very one-dimensional in flavor and needed something else to cut into the thick peanut butter taste. 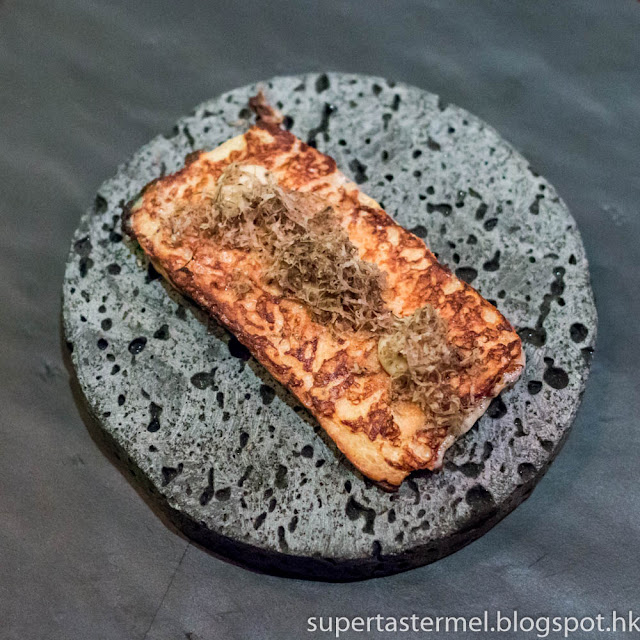 The smoked potato with wasabi pesto had a pleasant smoky aroma but I couldn't really taste the wasabi pesto so the taste was rather one-dimensional again. 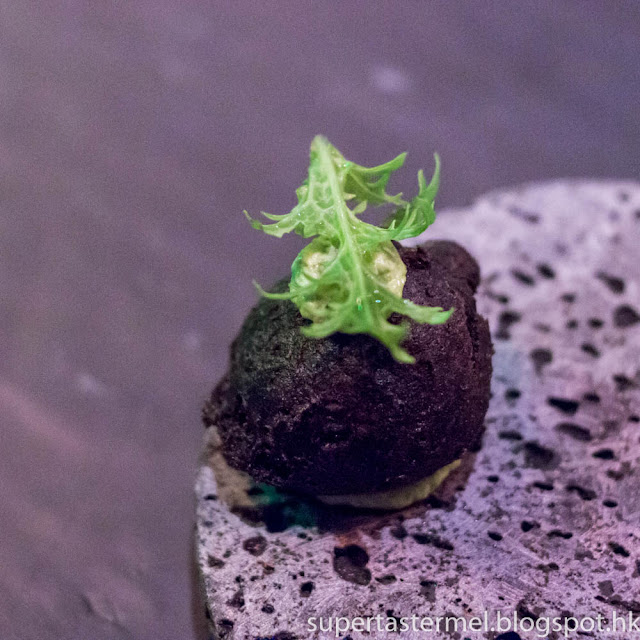 The EGG turned out to be one of the more impressive dishes of the night with a sweet combination of organic egg foam, corn juice and uni topped with seaweed and winter truffle. 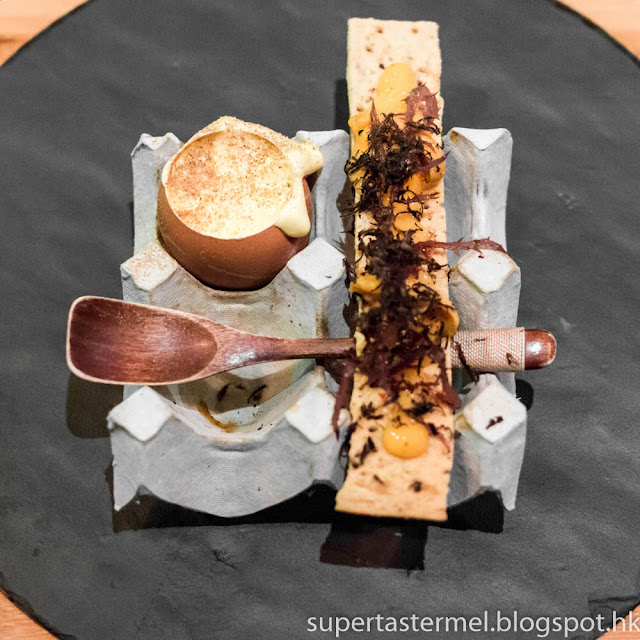 The OYSTER came in two flavors where the fresh oysters from France were topped with Beluga caviar and Kobe beef with kimchi juice and Spanish rice. The caviar was definitely the better of the two as there was a bit too much going on with the beef and kimchi combination which overwhelmed the delicate flavors of the oyster. 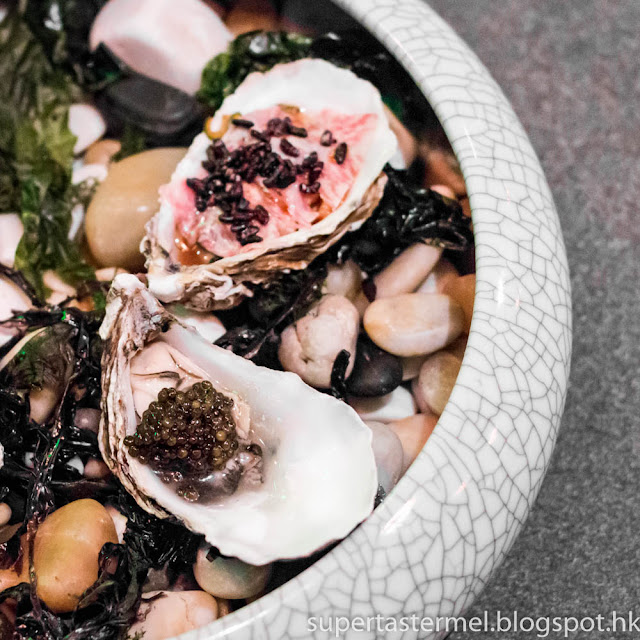 The KING CRAB with pickled rose petals and coriander ginger jelly had a lot of potential but the flavors of the fresh crab meat was pretty much destroyed by the concentrated crab and pomegranate juice which turned out to be really salty. I think the chef wanted to showcase a combination of sweet, sour and spicy flavors but sometimes simplicity is best when it comes to seafood. 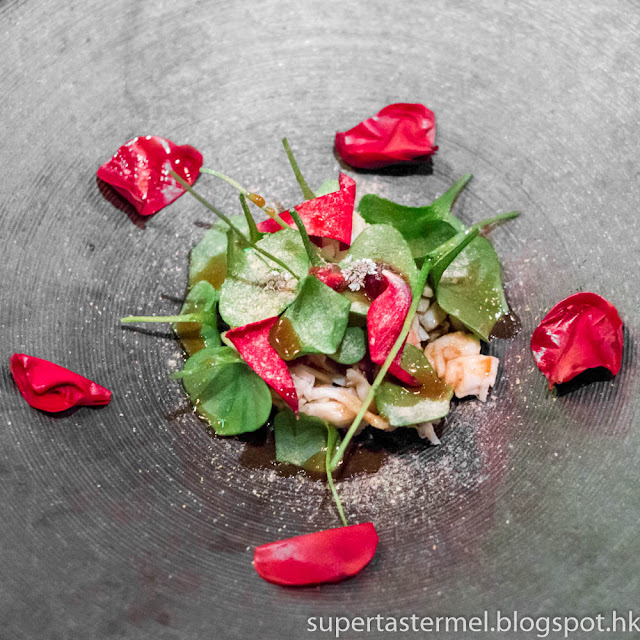 The flavors of the LANGOUSTINE with lime cream and black garlic chili powder was as lackluster and unmemorable as its presentation. 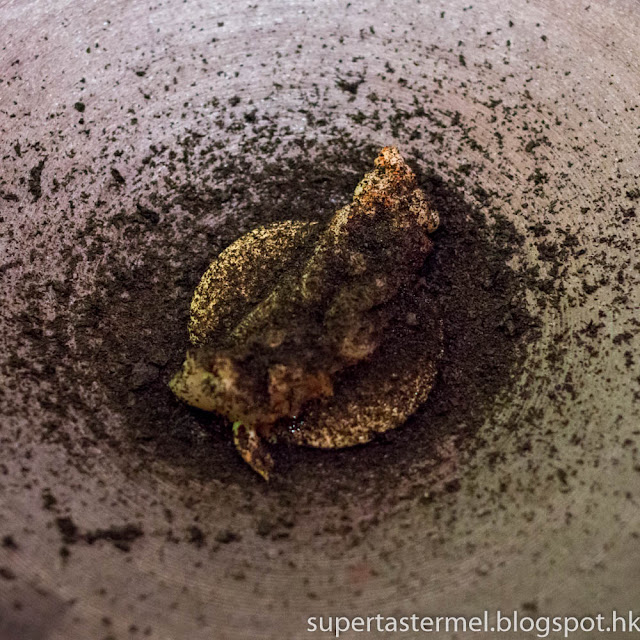 The SCALLOP had the most gorgeous presentation of the night with all elements of the ingredient used including scallop collagen and sun-dried scallop consomme. I liked the creative idea of a scallop tartare along with the contrasting textures of the soft pieces of collagen and crunchy tapioca but I thought that the the consomme was overpowering and didn't really suit the natural sweetness of the scallop. 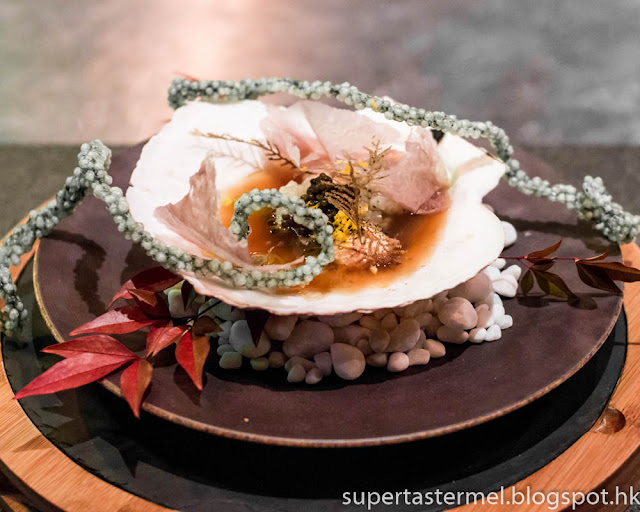 The KOBE BEEF with beetroot, miracle fruit and demon pepper demonstrated the chef's fondness for unique ingredients but in this case I think it unnecessarily over-complicated the dish which didn't really come together as well as it should. The beef cheek had been slow-cooked for 2 days and was very tender but I wasn't sure that the spicy demon pepper sauce enhanced the flavor of the beef. 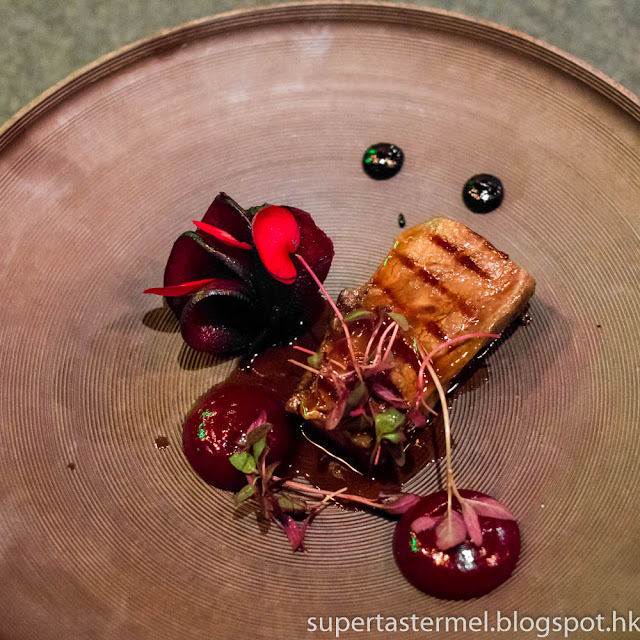 We were showcased the whole MIERAL DUCK which smelled amazingly as it was smoked with hay. The duck was nicely cooked with a rare center but I didn't enjoy the accompanying Korean strawberries that had been marinated in Guinness beer for a month as the slightly bitter flavors didn't do much for the meat. It was a shame since we were given fresh versions of the strawberries to try and it was deliciously sweet. 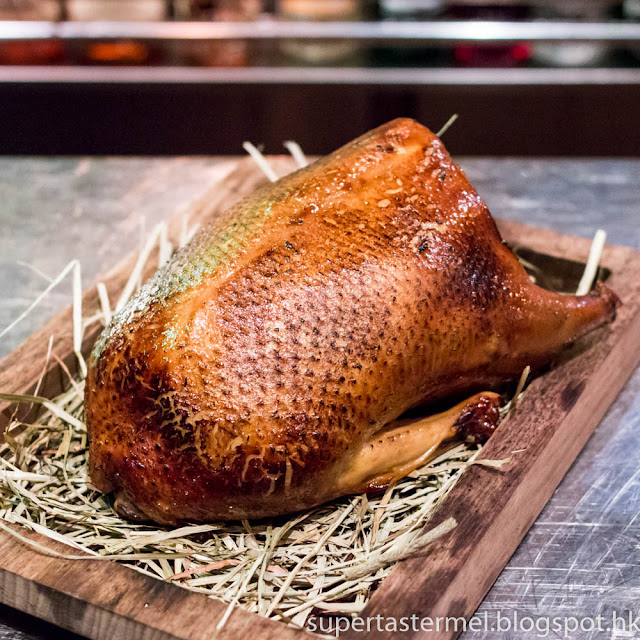 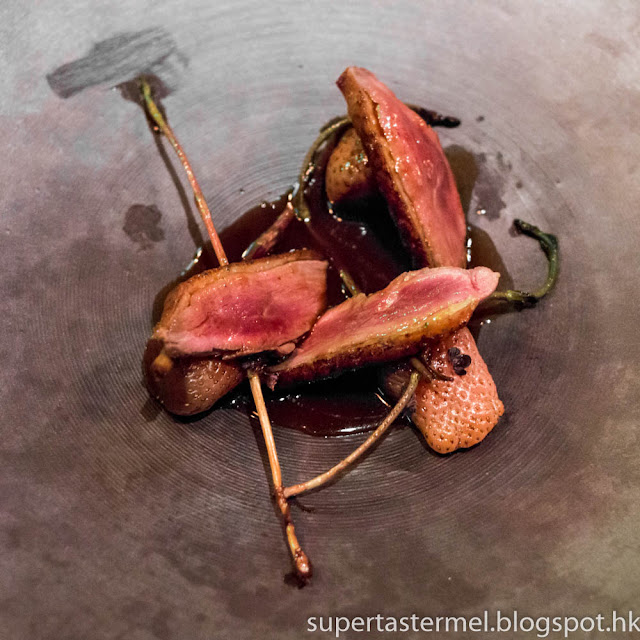 I had pretty much given up hope at this point in the meal but the CHESTNUT with 18 year old rum churro and chocolate creme turned out to be surprisingly heavenly as the churro was one of the best that I have eaten in HK after Limewood's! 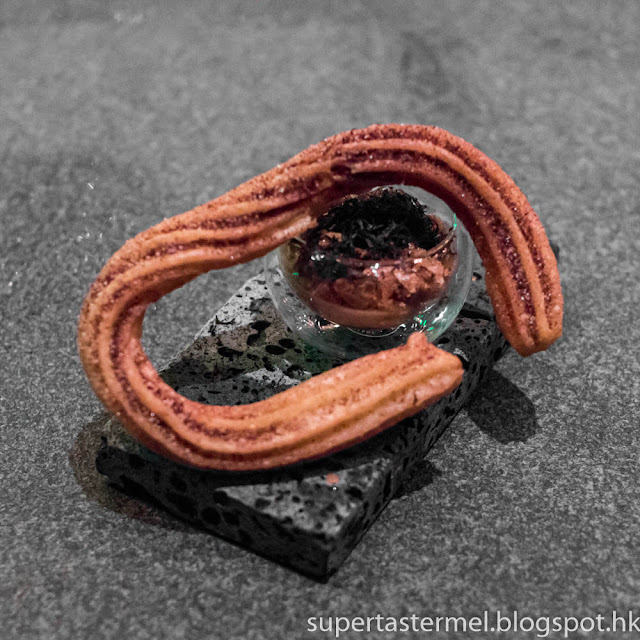 Just as we were getting hopeful, we got knocked down again by the CHOCOLATE which is a black forest inspired dessert with crunchy chocolate sponge cakes, chocolate sorbet and cherry almond sauce. The temperature of the sorbet was way too cold which destroyed much of the flavors while the sponge cakes were too hard and dry. The initial plating was quite pretty with alternating white and red sauce but it ended up being all covered up with chocolate bits when served which was a shame. 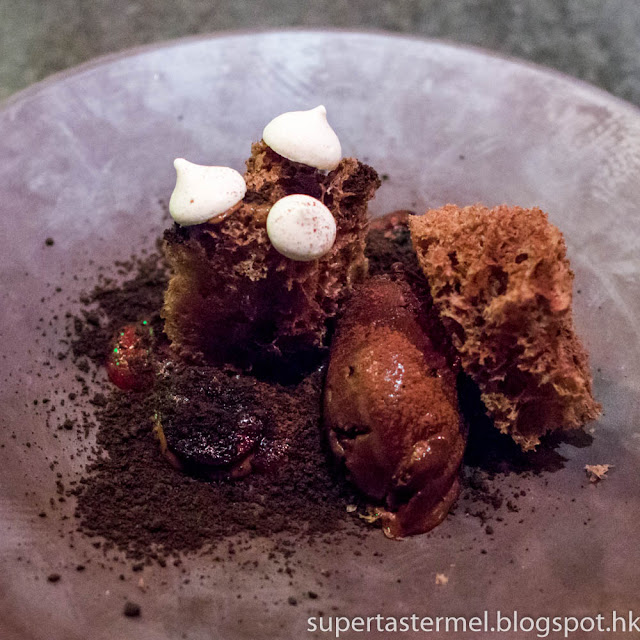 Verdict - it's a sad night when you spend close to $1K on food only to be disappointed and dissatisfied. No doubt that the chef is talented and not afraid to push boundaries with his bold combination of ingredients but unfortunately the flavors in a lot of the dishes that we tried simply didn't work for me.