The second highlight of my trip to Tokyo was my dinner at Jimbocho Den - a 1 Michelin star modern kaiseki helmed by Zaiyu Hasegawa that is known for its quirkiness! When I first saw pictures of its food on social media, I wasn't sure if it was just gimmicks or not, but the food turned out not only to be playful but also well thought-out with flawless execution on its concept. In addition to the food, the service was also a stand-out for me as the food scene in Tokyo can be very secretive and shut off to foreigners sometimes, so it was a welcome change for a restaurant to be friendly to tourists as well. The 9 course set menu costs ¥18,000 which was very reasonably priced for the dining experience that you get!

Located conveniently next to Jimbocho station, the restaurant is a bit hidden along a small street and we almost missed the entrance due to its unassuming front. Only when we looked closer at the word on wooden board which said 傳 (Den) did we realized that this was the restaurant we were looking for. The restaurant is cozy with 8 counter seats along with a few small tables and a private room for 4. 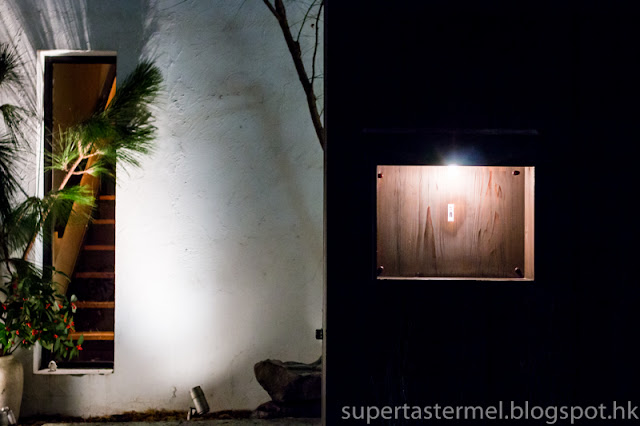 We got seated along the counter and received a glass of complimentary welcome drink which was a sparkling wine from Italy! 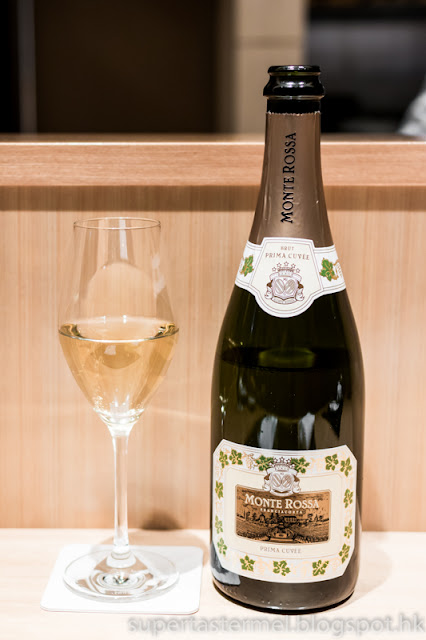 Our first course was a Monaka with a customized filling of persimmon, foie gras and radish. Monaka is a Japanese dessert made of two thin crisp wafers with azuki bean filling which can also be substituted with sesame, chestnut or mochi. The tartness of the persimmon balanced the richness of the foie gras perfectly while the radish provided a contrasting texture. 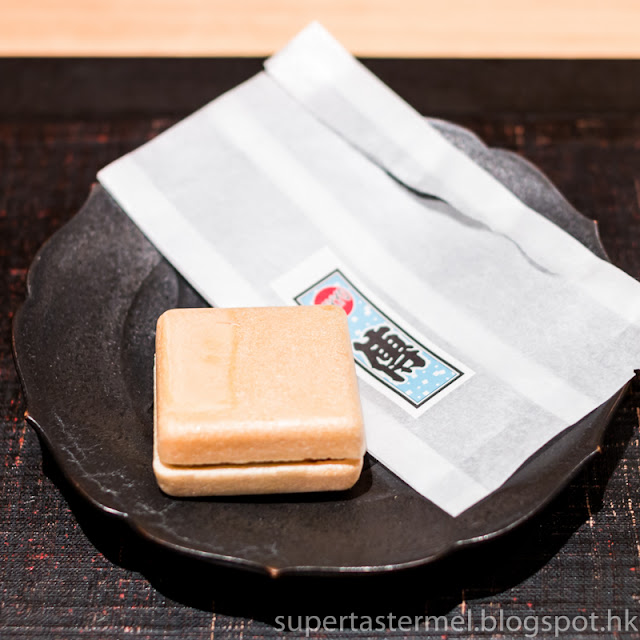 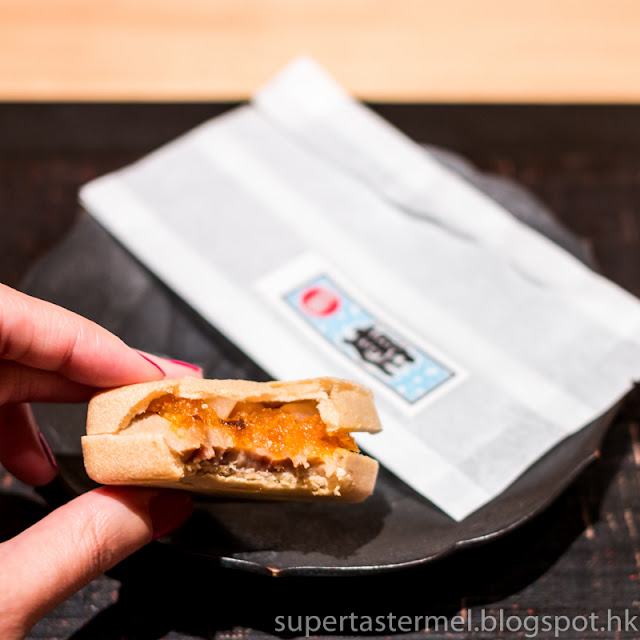 The Turtle Soup with yuzu, seaweed and ginger was savory and satisfying to drink on this cold winter night especially with a peppery aftertaste from the ginger. I loved the presentation here and the shells were from real turtles by the way. 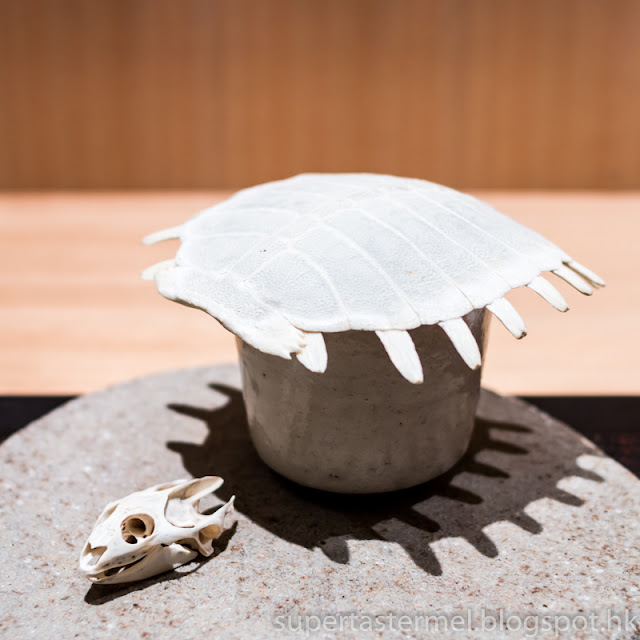 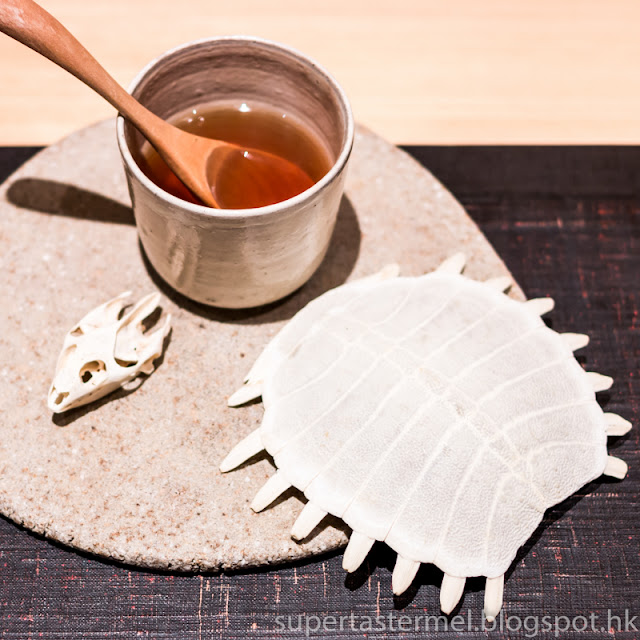 The Dentucky Fried Chicken is a signature dish here that is a playful take on KFC as we were presented with a box which looks very much like KFC except it has the chef's face on it instead of Colonel Sanders. We opened the box to find our surprise inside which for me was a card with Happy Birthday written on it and of course the main star of the dish - a fried chicken wing stuffed with vegetable rice! 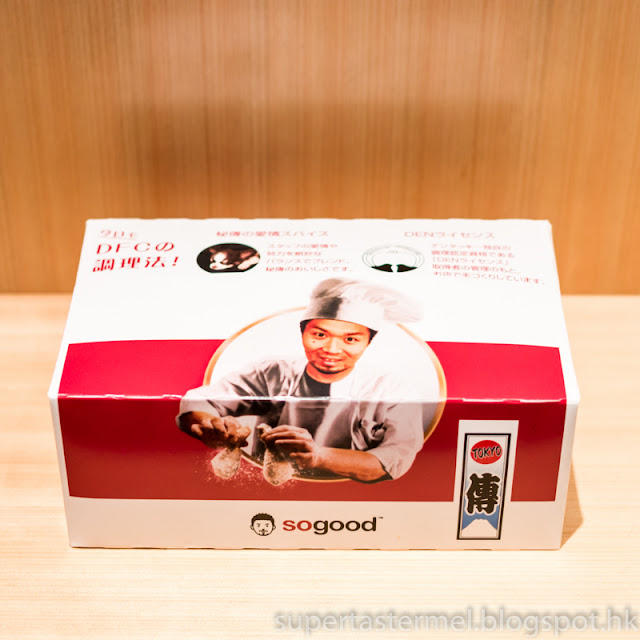 The chicken wing rested on soy beans and straws which are supposed to represent the coming of Spring. 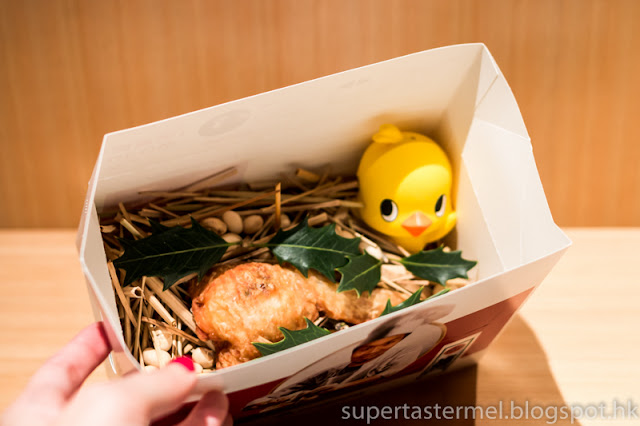 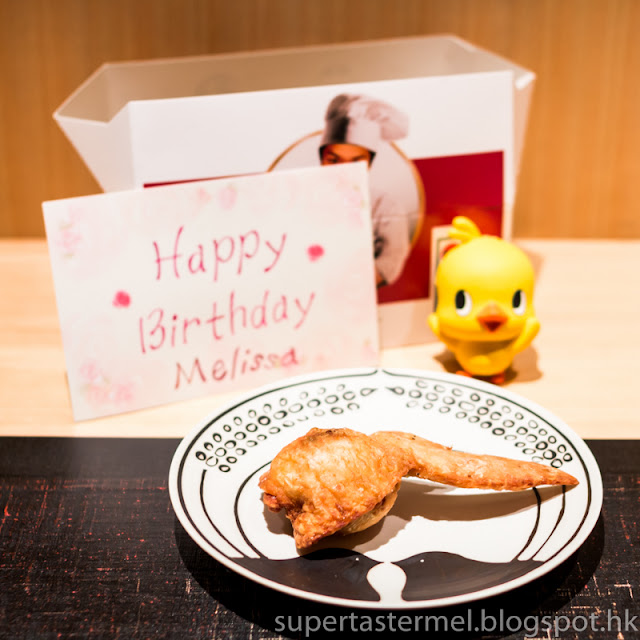 The rice stuffing reminded me of the vegetable rice from Shanghai which I was surprised to find to be such a good match for fried chicken! 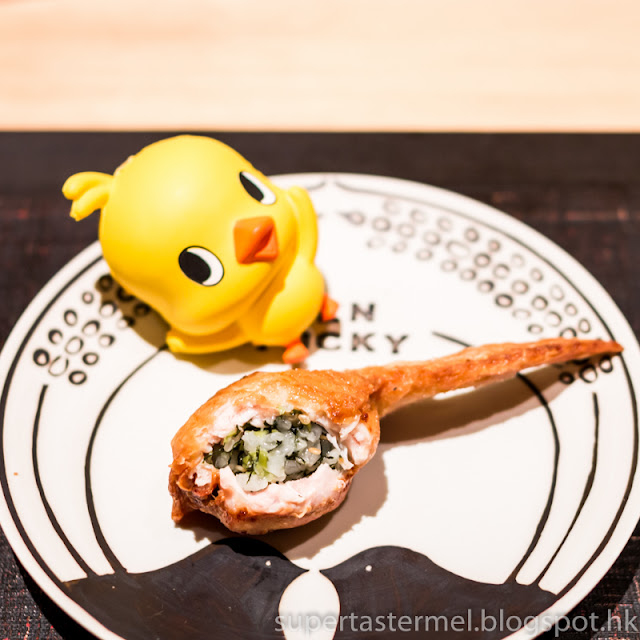 The Sawara (Spanish mackerel) was very soft and tender but it was the sweet nori sauce with seaweed, vinegar and dashi that stood out here. 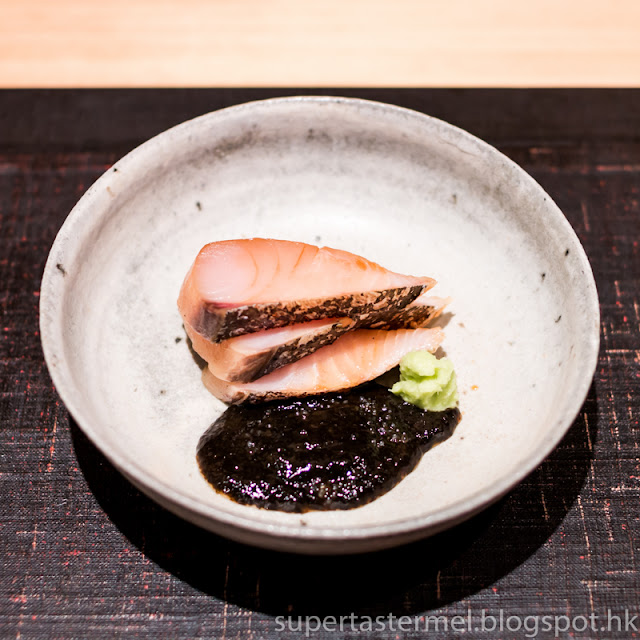 The Duck Meat with bamboo, cabbage, kale and leek had a simple and yet delectably sweet flavor. 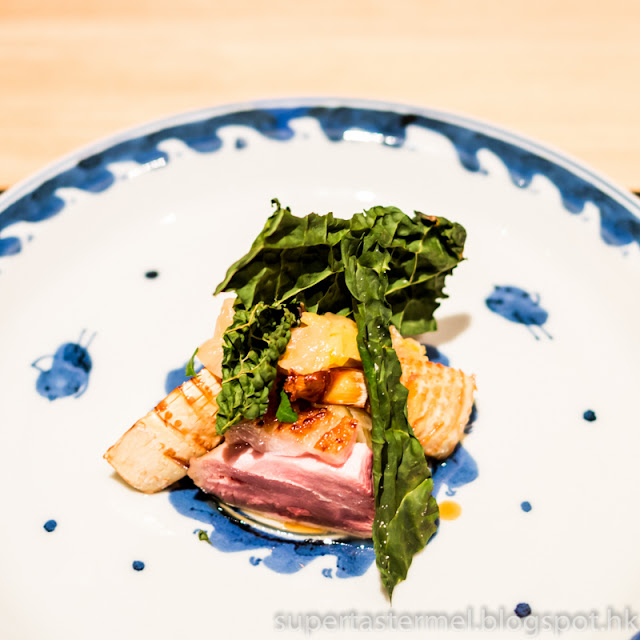 Um hey there's an ant in my salad! Actually it was part of the salad with 20 vegetables and tossed with dashi and vinegar. It was my first time eating ant which had been meticulously prepared beforehand as it was fed nothing but water for 2 weeks and it was crunchy with an acidic taste to it. J was really impressed with the salad as the vegetables were all prepared in different ways and claims that this was the best salad that he's ever had! 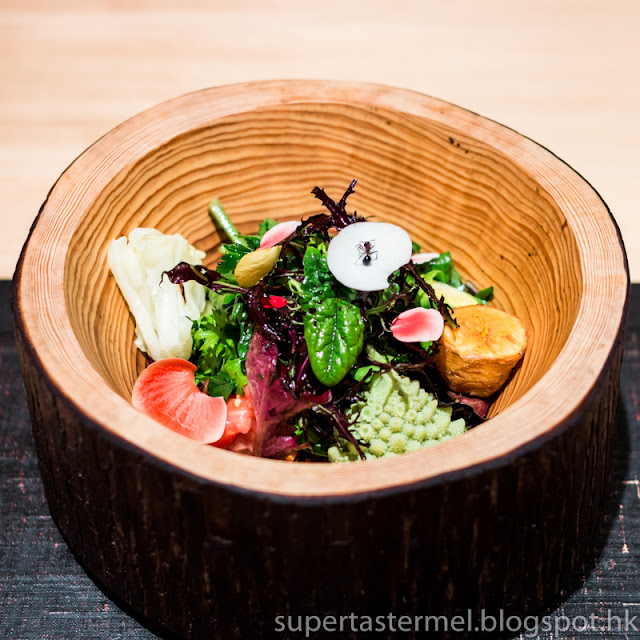 I also found an emoji carrot in my salad! 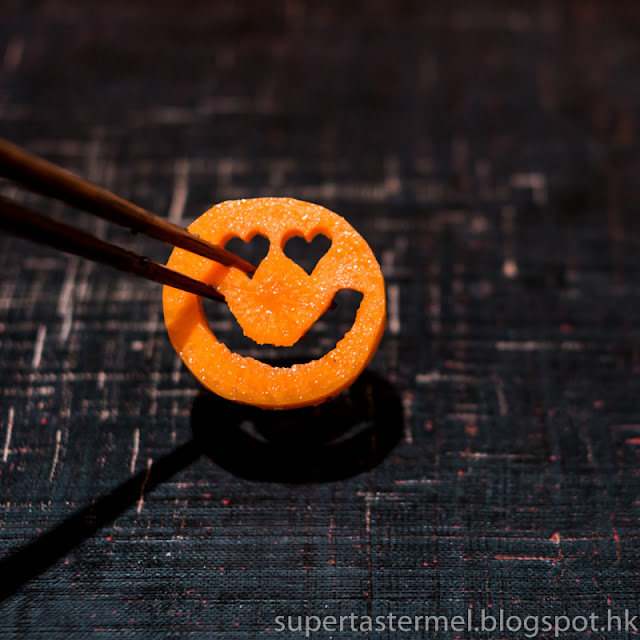 The chef always serves a rice at the end of his meals with different seasonal ingredients and ours was with Gindara (silver cod) which was cooked with soy sauce and Japanese stock. After presenting it to us, he mixed it all up and served with miso soup and pickles. 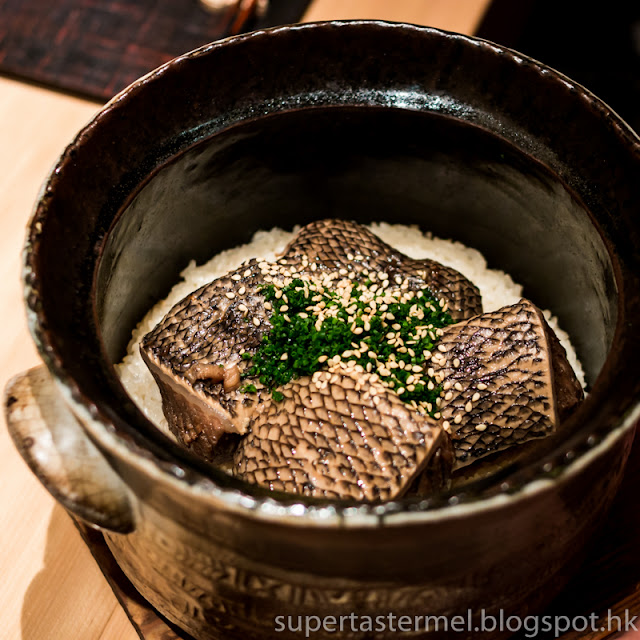 The rice was a delight to eat as it was deliciously savory and sweet - I would have another bowl if I wasn't full already. 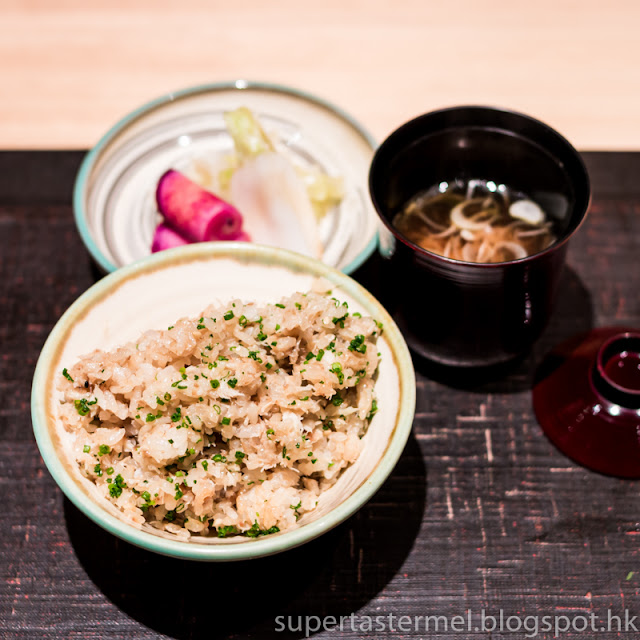 The playfulness of the meal continued into the dessert courses as we were asked to decipher a hidden message on the newspaper place mat first. Certain letters were circled with a colorful marker which spelled out "Thank You" on mine. Then the chef marched in and placed this trowel with our dessert on it which was a Cream Cheese Mousse with moss, green tea, black tea, dill, buckweed and black truffle. The herbs were all from the chef's own small garden which was right by the entrance. It was like eating tiramisu with houjicha as the tea aroma kept swirling in my mouth afterwards. 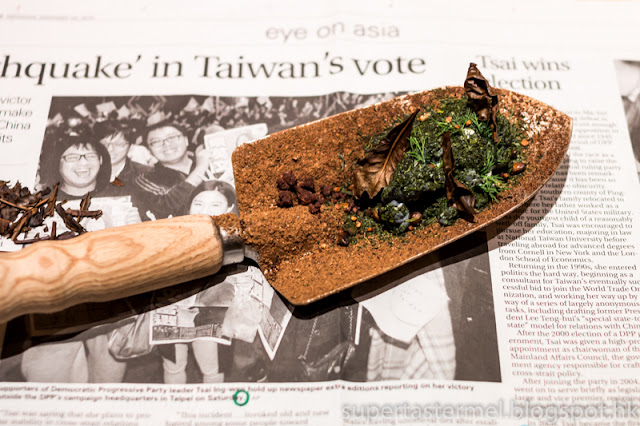 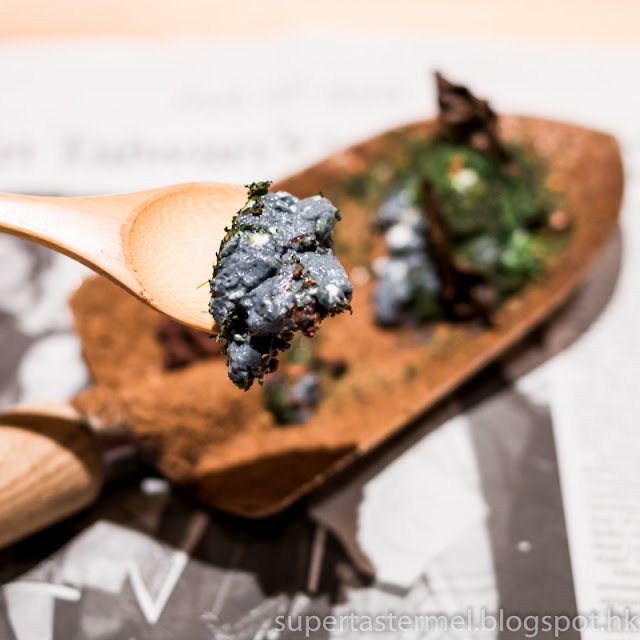 Even the gloves were folded into a cute victory sign as part of the presentation! 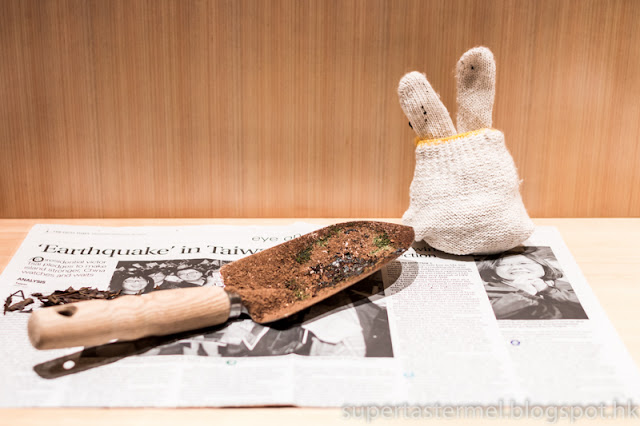 Lastly, the chef's last message to us was presented on this Star Come Backs mug with an irresistible combination of sugar cane, caramel, black truffle, custard and milk. With such generous hospitality and creative cuisine, of course we will come back! 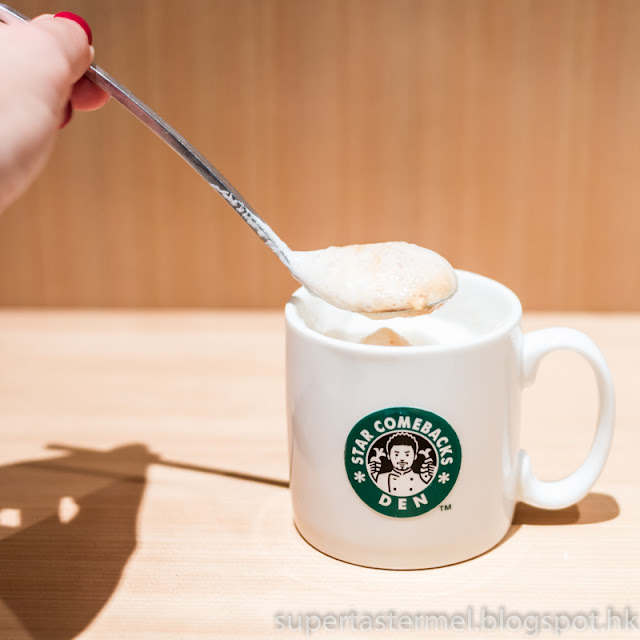 And of course since we were the last customers to leave, the chef and his whole team came out to bid us farewell, waving their hands until we turned the corner - such is Japanese hospitality!