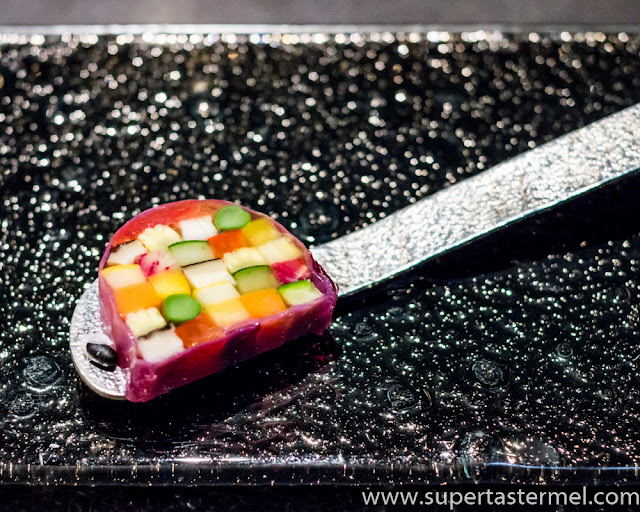 Enjoy your imagination at Takazawa where food is not bounded by rules or conventions! I first heard about the restaurant from my "mostly" vegetarian friend ("mostly" because he makes rare exceptions and this was one of the case) who highly recommended the place. It is currently #33 on the Asia's 50 Best Restaurant 2016 list with no Michelin star, but only because Chef Yoshiaki Takazawa declined - in my opinion, Takazawa could easily have 2 Michelin stars based on the creativity and quality of the food which is Japanese-French fusion.

Reservations are not exactly easy since the restaurant only serves 10 seats per night, but it's not too hard either as they take reservations by email on the 1st of every month for the following month (i.e. if you want to visit in August, it's best to email them on July 1st). I corresponded with the chef's wife Akiko who confirmed our reservation and asked us to choose between 2 menus: 9 dishes for ¥‎24,000 or Chef's Tasting Menu of the Day for ¥‎30,000. We opted for the latter, and once we made our way up the stairs into the intimate restaurant, we were greeted warmly by Akiko who spoke fluent English and took great care of us during the entire evening. 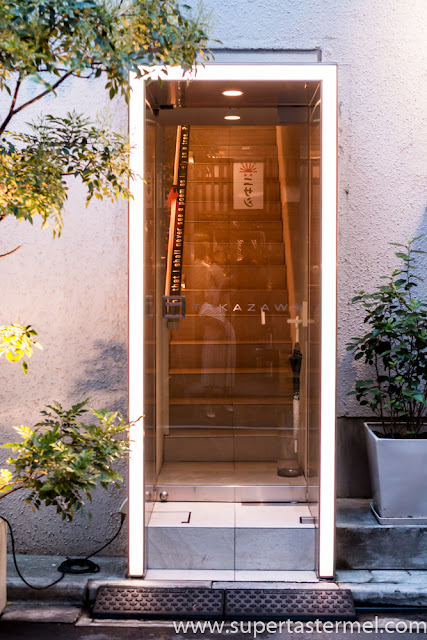 The main focal point of the dining room is the stark metallic table where the dishes would be assembled by the chef and his team. I was free to take photographs of my food but Akiko's only request is that I do not take pictures of the chef who is apparently camera-shy. A piece of paper titled "ENJOY YOUR IMAGINATION" had been placed on our table already with the 10 courses we would be getting for our Chef's Tasting Menu. All of the dish name had a year next to them which I assumed is when the dish was first introduced into the restaurant. 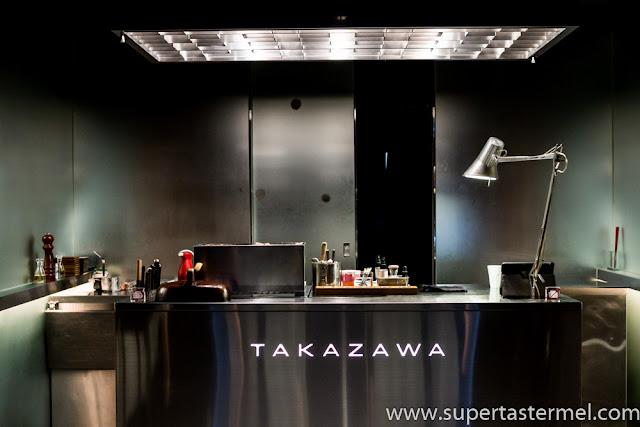 The first of our amuse bouche is a refreshing Junsai with Tomato Water. Junsai is an aquatic plant from Akita which is best known for its slippery and gelatinous texture. 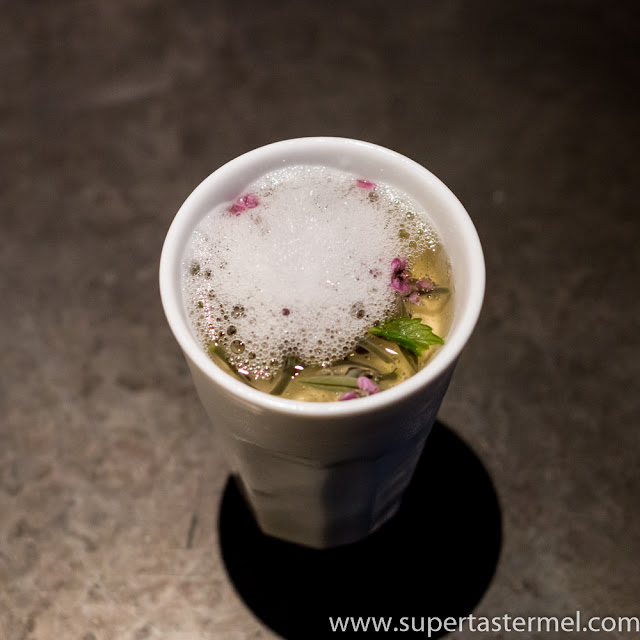 The next dish was a delcious Baked Clam topped with a crispy cheese and basil crust. 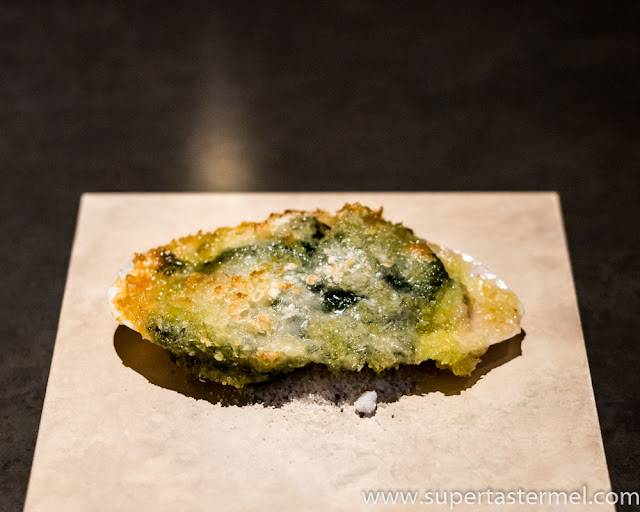 The last appetizer was a tender Octopus stuffed with its own innards and tentacles. 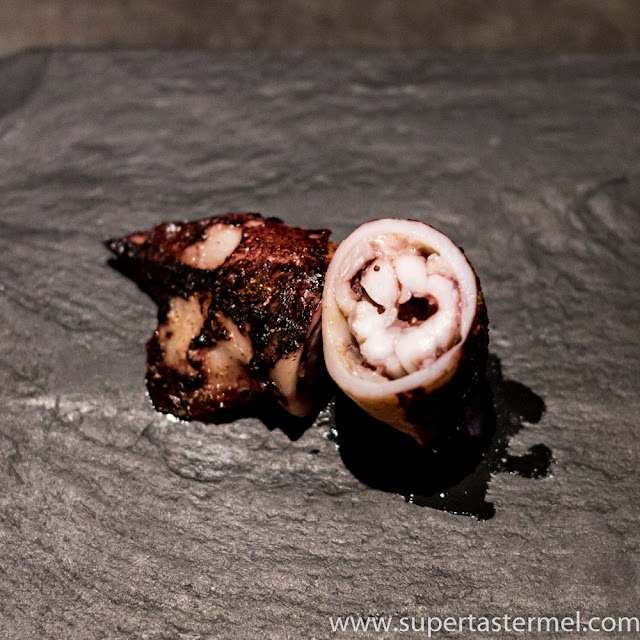 The first course was the chef's signature dish which had been on the menu since the beginning - Ratatouille (2005) with a dash of sea salt and black bean from Kyoto where each of the 12 vegetables had been prepared differently in its own ways. We were instructed to eat this colorful reinvention of a traditional French Provencal dish in one bite and the flavors were very fresh with a myriad of textures and flavors!

Our bread came next with a tube of onsen water and a jar of pork rillette made from Okinawan Agu pork. We were told to squeeze the tube of water into our mouths first before eating the bread, and it turned out to be one amazing piece of corn toast along with the super creamy and flavorful pork rillette. 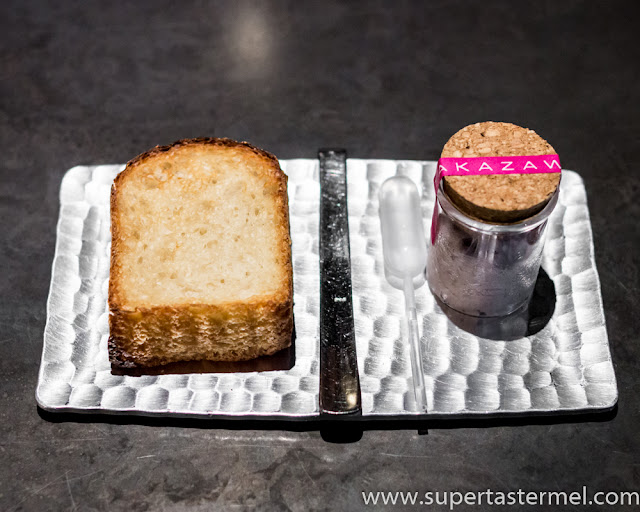 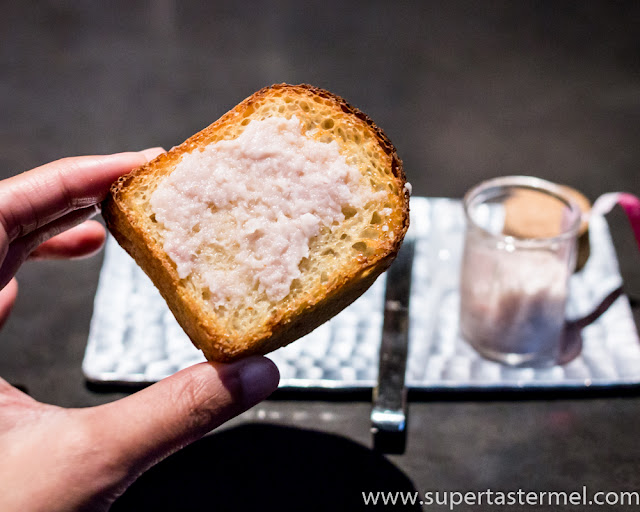 We continued our tasting menu with the next course Like a Caviar Canape (New) with sturgeon, caviar and garnishes of chives, shallots, lemon zest and capers on the side of the plate. I liked the presentation of the dish but not so much the flavors as the caviar easily overpowered the taste of the fish. 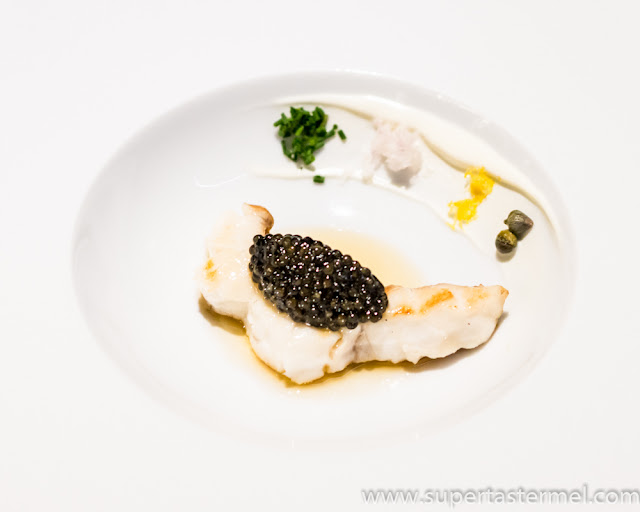 The Scallop Spaghetti (2013) topped with murasaki uni turned out to be one of my favorite dishes of the night as it was my first time eating pasta made from scallop puree, and it was delicious! 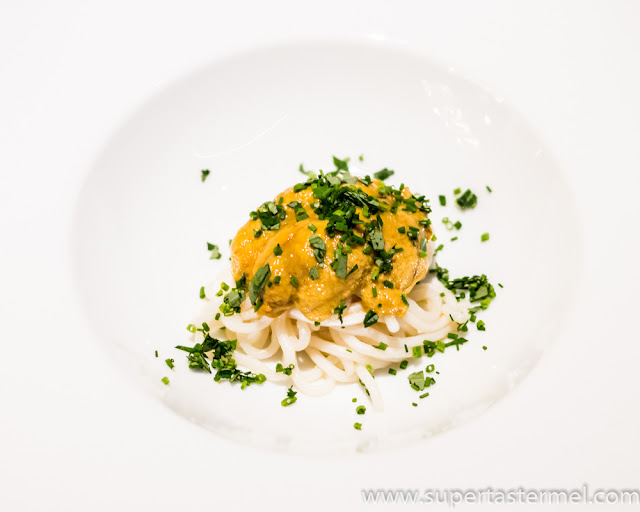 The 7 Tools (New) is perfect for monkfish lovers as everything on the plate was made from a part of fish with monkfish meat, monkfish skin jelly cube, monkfish liver ice cream and wasabi leaves. The name 7 Tools (七つ道具) refers to the 7 parts of the fish that is edible: flesh, skin, stomach, liver, ovaries, gills and fins. The stand-out was definitely the ankimo (monkfish liver) ice cream - I mean I love eating regular ankimo as is but I never thought it could be turned into ice cream which tasted even better! 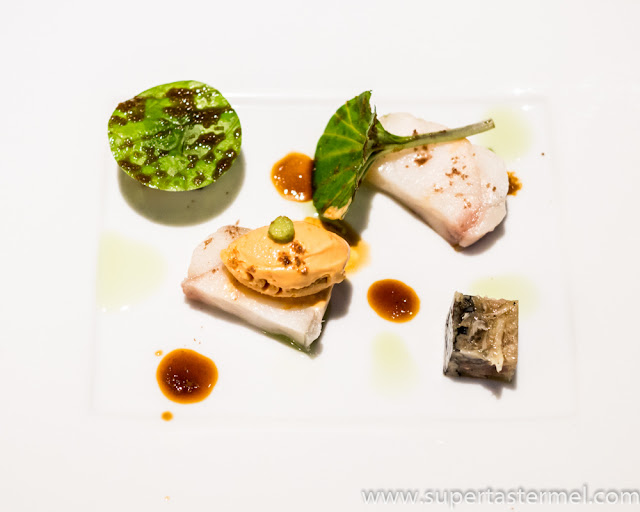 The Candleholder (2007) was another impressive dish with a foie gras brulee and apple jam with a piece of rosemary as the candle wick. We scooped a bit of each onto a piece of ciabatta and the combination was just heavenly. 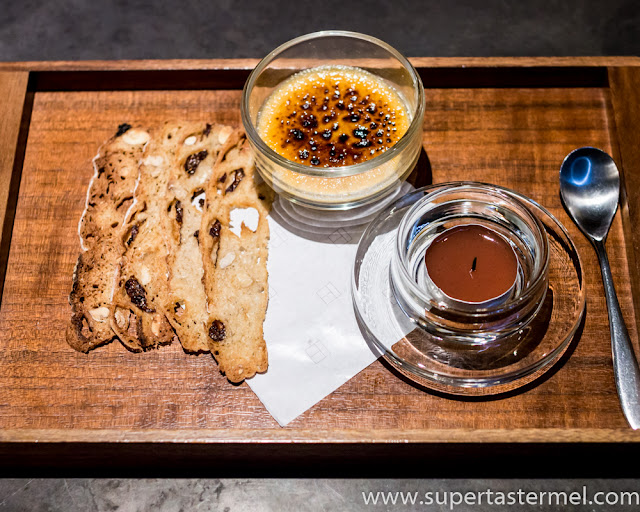 The Carbonara (2013) arrived in a case of smoke and the smoky aroma continued to envelop us after the lid was taken off to reveal the white asparagus with bacon and white truffle. Interestingly, I had a similar dish recently at Vinkeles in Amsterdam, but the execution at Takazawa was better with more depth in terms of flavors. 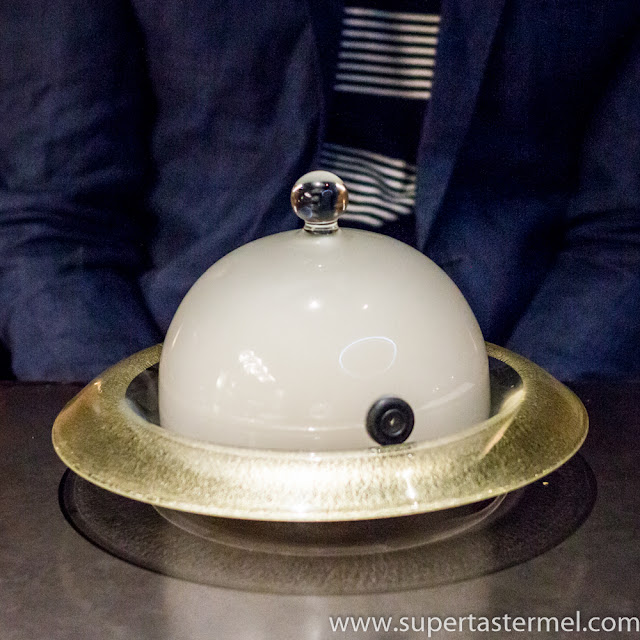 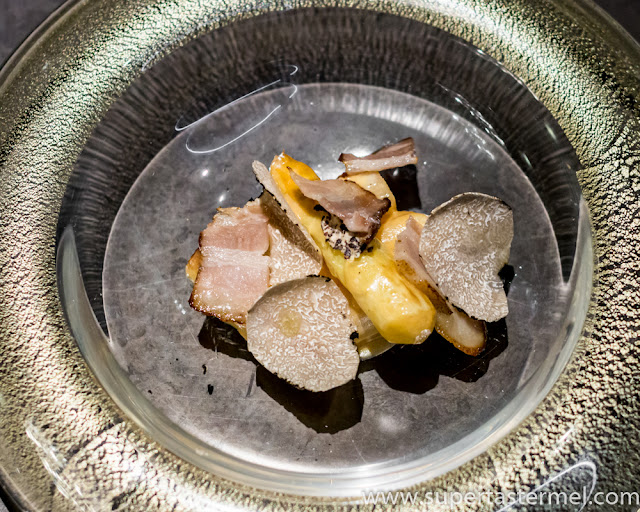 The Fish & Chips (2016 version) was an interesting take on the British classic with deep-fried cod fish, edible paper made from squid ink, foams of ponzu and vinegar, and Hokkaido kombu seaweed mayo. It was like deconstructed version if you will but the presentation was probably more memorable than the taste. 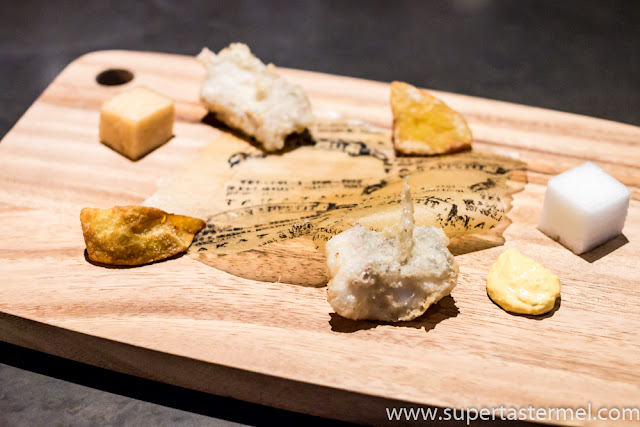 The Dinner in the Forest (2009) made a dramatic entrance in a haze of smoke, and it was then revealed that we were in for special treat as the meat on the tree stump was brown bear from Hokkaido! It was my first time eating bear meat but I'm not sure that I'm a fan of it as it is not as flavorful as beef - in fact it didn't really have much flavor. The baked burdock root was more impressive as it was soft and creamy like a sweet potato. 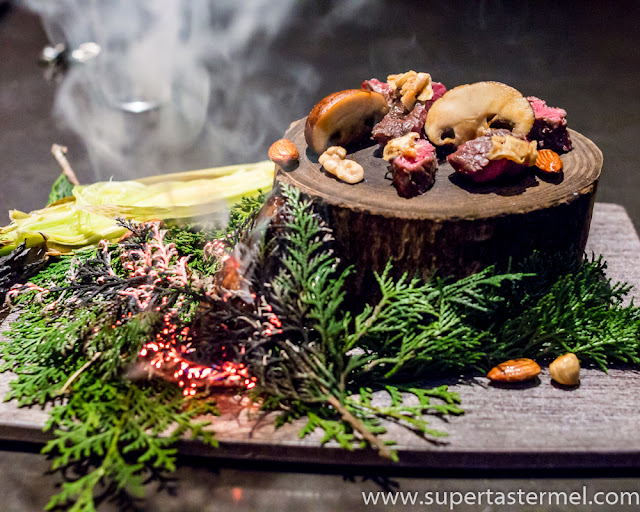 We then transitioned to our dessert courses, and we had hot tea made from herbs that had been grown on a rooftop in Odaiba 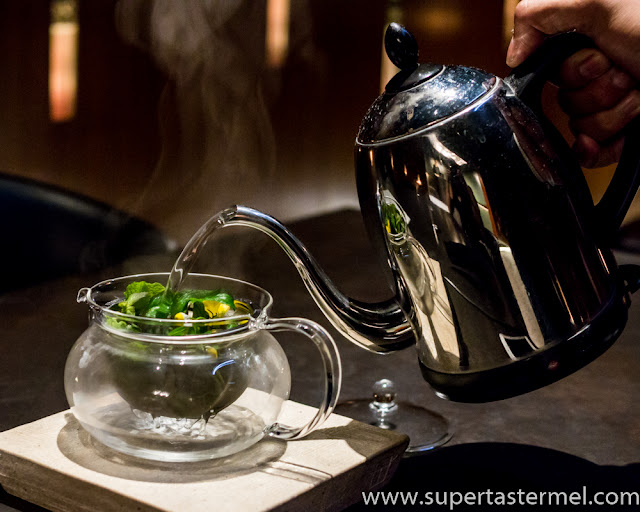 The desserts continued its playful presentation as the Chocolate & Mint (2015) may look like regular soba at first but it was actually noodles made of mint with a chocolate dipping sauce. While I liked the creativity of the presentation, I didn't really like the flavor combo as it reminded me too much of mint chocolate candy. 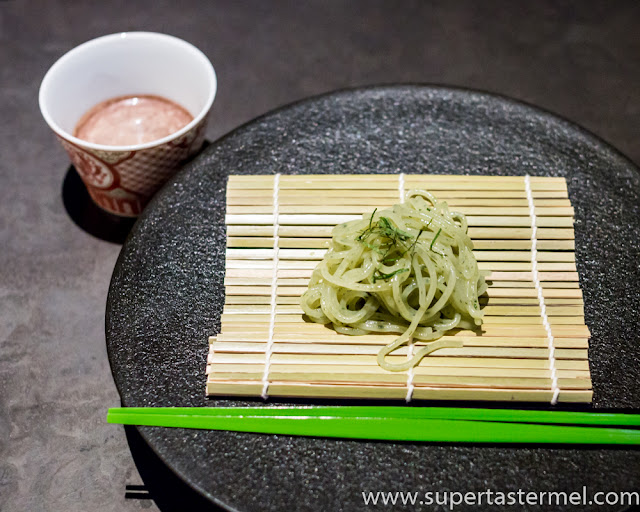 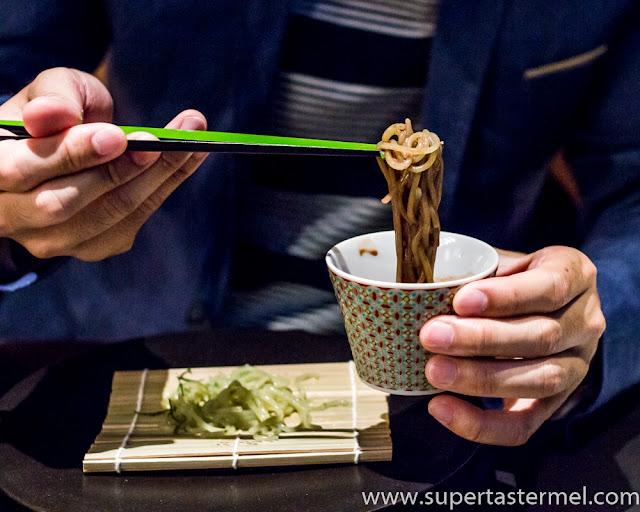 The Rice and Egg? (2015) turned out to be another playful dessert with coconut rice, tea jelly, and mango as egg yolk! The eggshell containing the tea jelly and mango were poured over the coconut rice in front of us, and while I liked this dessert more than the previous one, I thought that the coconut rice was too dry. 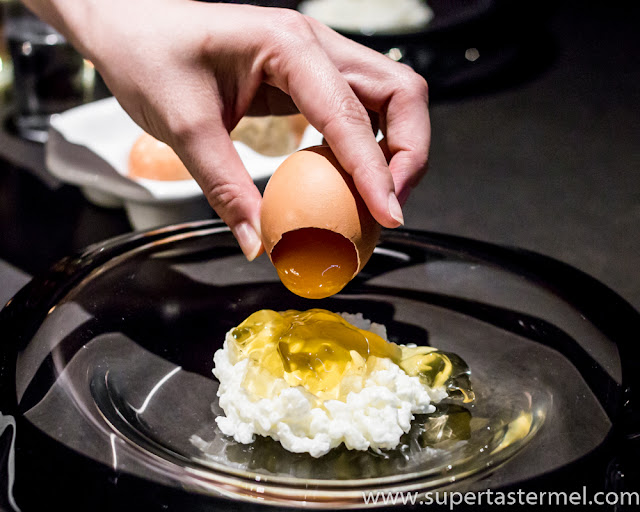 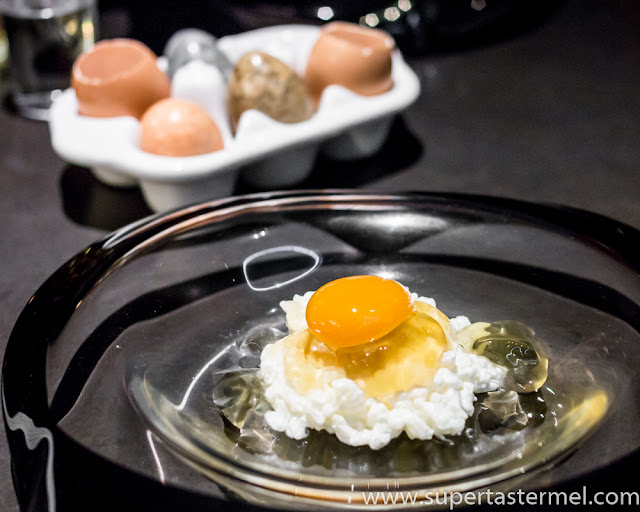 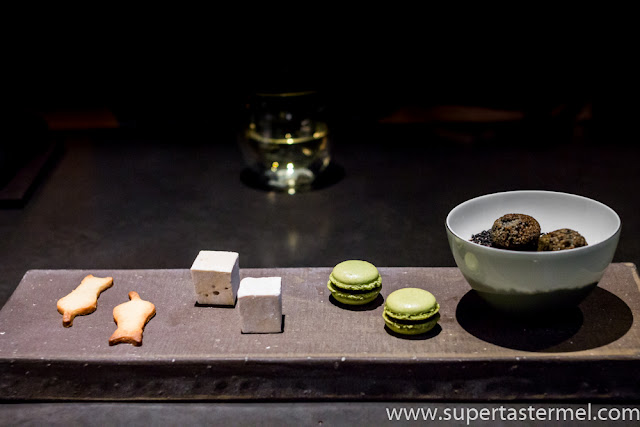 Takazawa is a bit expensive compared to other French-Japanese restaurants in Tokyo like L'Effervescence or Florilege, but it's hard to compare them because the food at Takazawa is almost one of a kind and definitely worthy of an experience if you don't mind paying for it.