[Tokyo] All About the Tuna Auction at Tsukiji Fish Market!

I finally made it to the Tuna Auction at the Tsukiji Fish Market after going to Tokyo so many times before it moves later in November! It helped that I was jet-lagged from Europe so I couldn't sleep at night anyways. The tuna auction starts at 5:25am and I knew that I had to show up hours before to line up since there is a limit of 120 visitors per day, but when I tried to look up the best time to go, I found various sources saying to show up at different times ranging from 3am to 4:30am. I was all set to go at 3:30am when a friend told me that when he showed up at 3:30AM earlier this year, he got the last spots for the auction so to ensure that we get into the auction, J and I decided to go at 2:30am. When we got to the Fish Information Center, there was already a line and a sign on the window that says the Tuna Auction registration time is from ~2:40am to 3am. All of the 120 visitor quota for the auction was filled by around 3:30am so I would say that it's best to arrive by at least 3am if you want to get into the auction. Also figure out where the Fish Information Center (that's where you register to watch the tuna auction!) ahead of time so you don't have to look around like we did in the middle of the night. We managed to find a paper map at the main gate and this map from Japan Guide is a good representation of it - the registration center is at the Kachidoki Gate on Harumi Street. The Tsukiji Fish Market is also not opened everyday so remember to check the calendar before you decide to show up in the middle of the night!

Once you make it pass the registration for the tuna auction, you will be handed a colored vest to wear where the colors signify which of the 2 groups you will be. We got the yellow vests which meant that we will be watching the first auction at 5:25am while the green vests indicated the second auction at 5:50am. We were ushered into the visitor center where we had to wait for 2 hours before the auction started so brace yourself for the wait. Bring something to entertain yourself and something to sit on as there are no chairs in the waiting area. 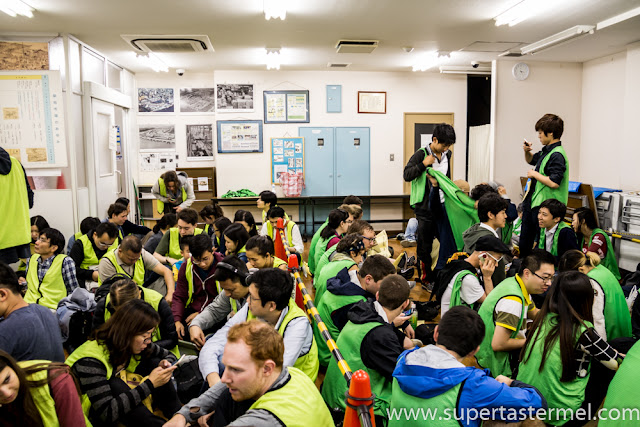 Everyone was handed an information leaflet to read about the rules of the tuna auction such as: 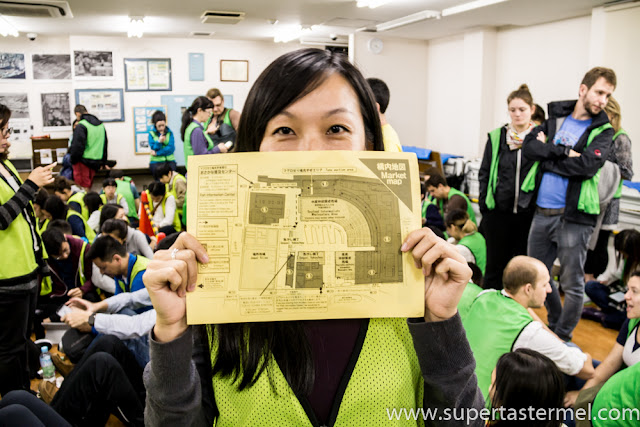 Finally it was time for the tuna auction! We were led to the warehouse where the bidding took place with the yellow fin tunas on one side and the blue fin tunas on the other. Before the auction started, we got to observe the bidders diligently inspecting the fish by looking at the color of the flesh and even taking a bit of the tuna to taste as well. 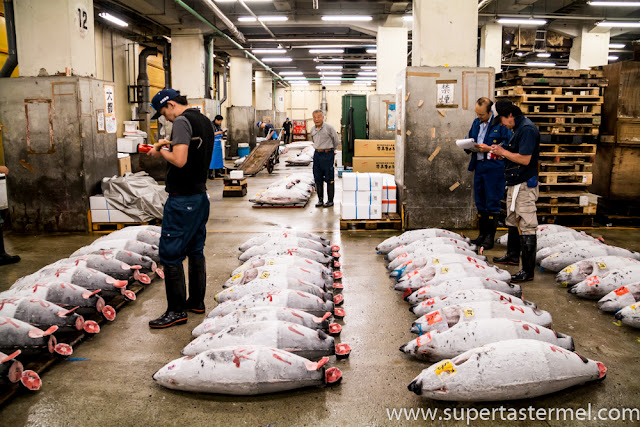 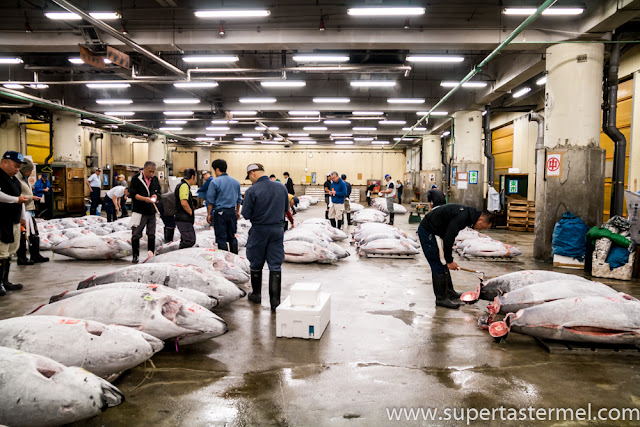 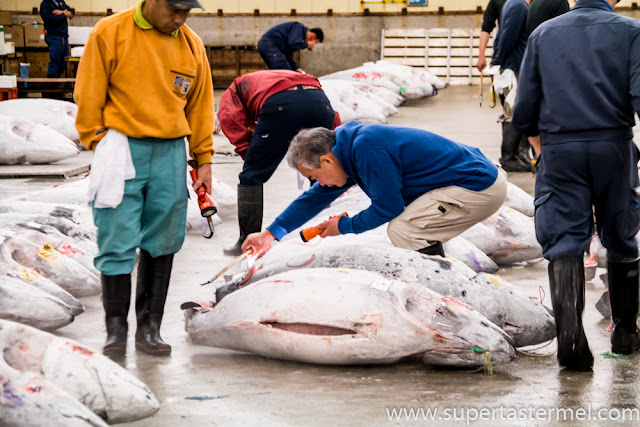 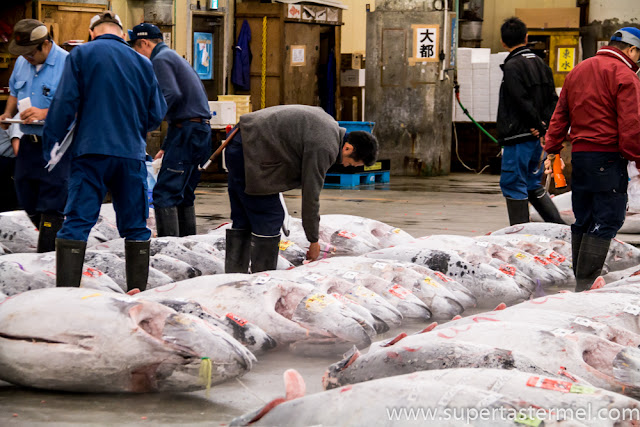 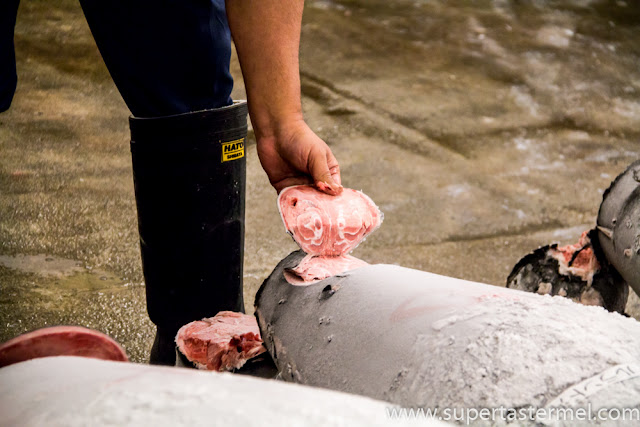 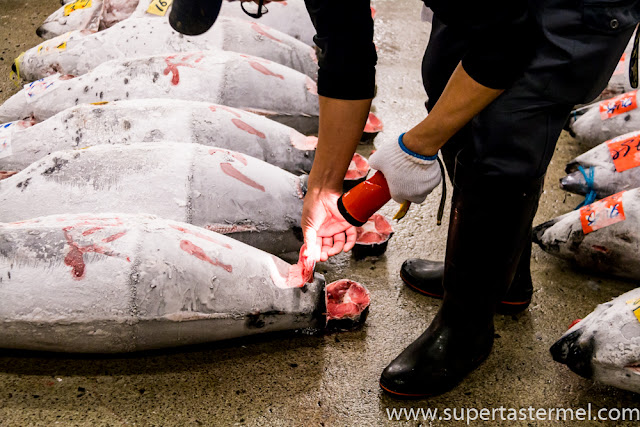 After around 10 minutes, we got to watch the yellow fin tuna auction which lasted around 5 minutes. Watch the video below for the action and remember to turn up the volume as the auctioneer standing in front of us basically singsong his way through the entire auction. He is calling out which tuna is up for sale (each tuna is numbered from 1 to 33) while the bidders are bidding for the fish with their fingers. I hear that each auctioneer has a different style so your experience may be different depending on who you get. Either way it was a great experience to watch and totally worth waking up in the middle of the night for!


After the auction was over, it was time for the bidders to claim their fish and time for us to depart to make way for the next group. 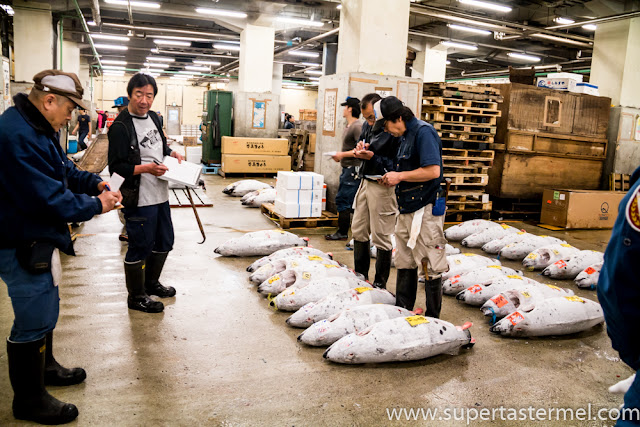 On our way back to the visitor center, we had to stop multiple times for the turret trucks which drove around really fast so be careful walking around the market at this busy time. Once we made it back safely, we handed over our vests and it was time for us to get some sushi breakfast at the Tsukiji Market. Stay tune for the next blog post on where we went to eat around the Tsukiji area! 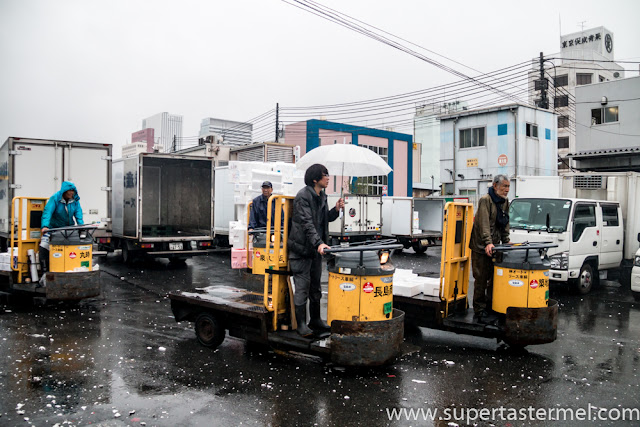