As the first overseas outpost of the 3* Ryugin in Tokyo, Tenku Ryugin has certainly not let the original down with an amazing location on the 101/F of the ICC and 2 Michelin stars under its belt in Hong Kong. It has even claimed #24 on Asia's 50 Best Restaurants 2015 so I came here for dinner with a fellow food blogger from Singapore with high expectations even though I knew that the original chef Hideaki Sato had left to open Ta Vie in Central earlier in the year. With only one 10 course tasting menu costing HK$2180, the meal was not cheap and the big question is - is it worth it? Let's find out. 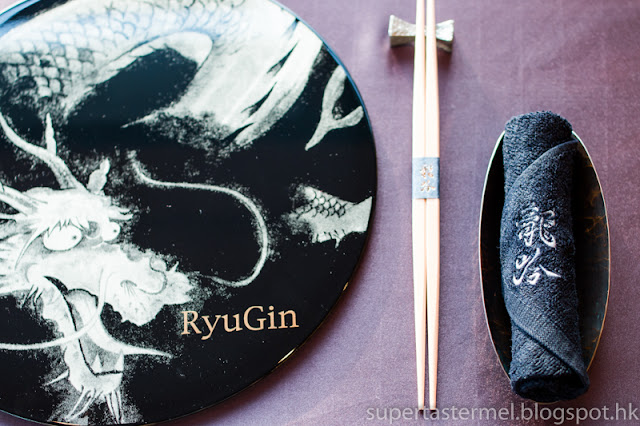 With floor-to-ceiling windows facing the sea side of the Victoria Harbor, there was lots of natural light coming in and we were able to watch the sunset as we progressed through our meal while the sun was coming down. 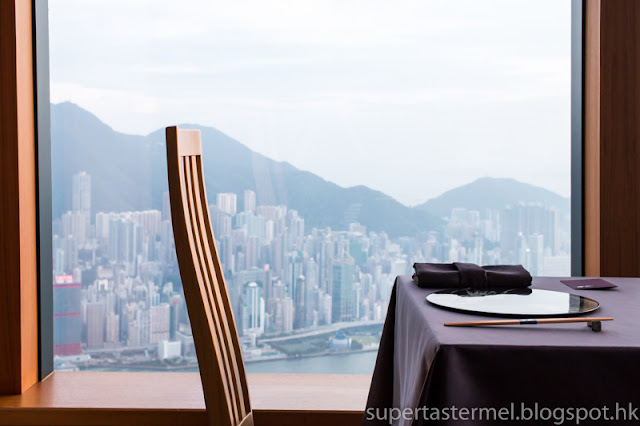 If you think these are bottles of wine, guess again. We were shown these bottles of special green tea which cost upwards of $900 when we were asked if we would like to order some drinks. We politely declined but I guess it sure would have been interesting to try such expensive tea! 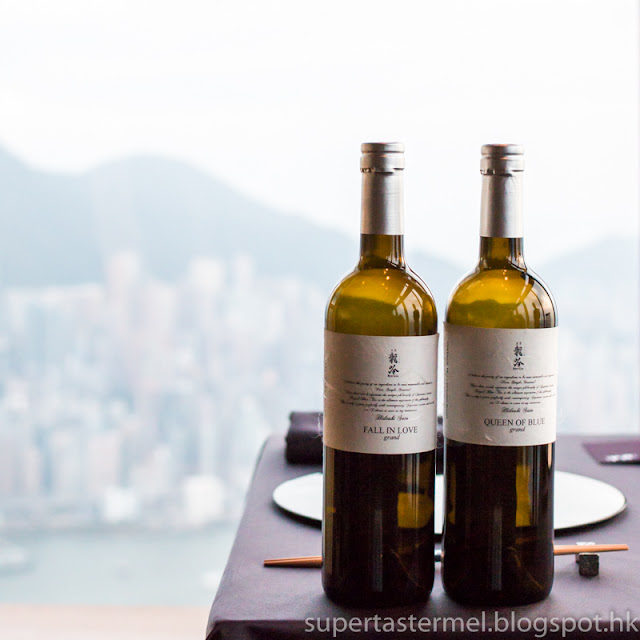 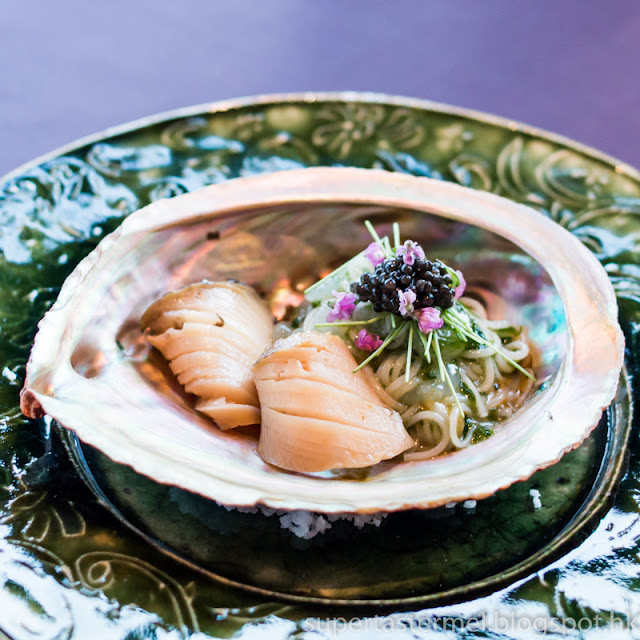 The "Foie Gras" flavored with porto and wasanbon sugar served with fresh figs and sesame cream sauce was another delectable creation as the bite size delight was packed with flavors that complimented each other perfectly. 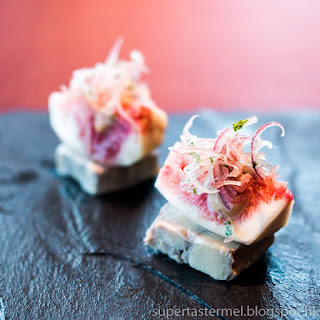 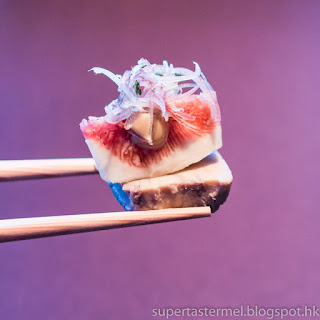 The "Hamaguri" clam soup with yuba dumping and bamboo fungus was soothing to drink with a deliciously sweet flavor. 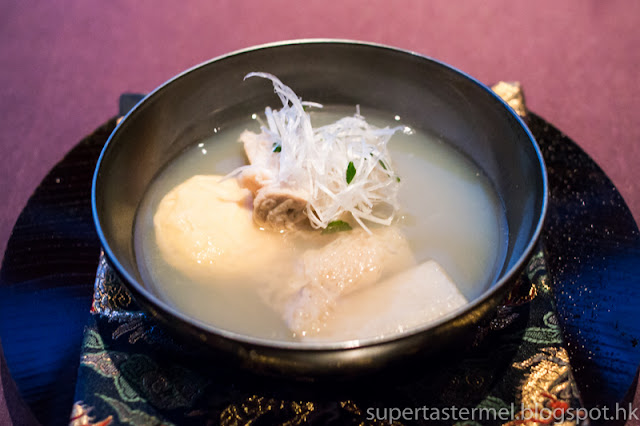 Unfortunately, the sashimi was downright disastrous as the hirame was bland and chewy while the maguro had tough tendons and dull flavors. We had come on a Sunday night and I was wondering where they got their fish from as the Tsukiji market is not open on Sundays and many top sushi restaurants in Japan tend to close its doors on that day too. Hirame is a white fish and one that has to be consumed very fresh or it will lose its flavor - too often I eat hirame outside of Japan only to find myself chewing on rubber like in this case. For a 2* establishment, I was very disappointed to be served sashimi of this quality for the price they are charging. 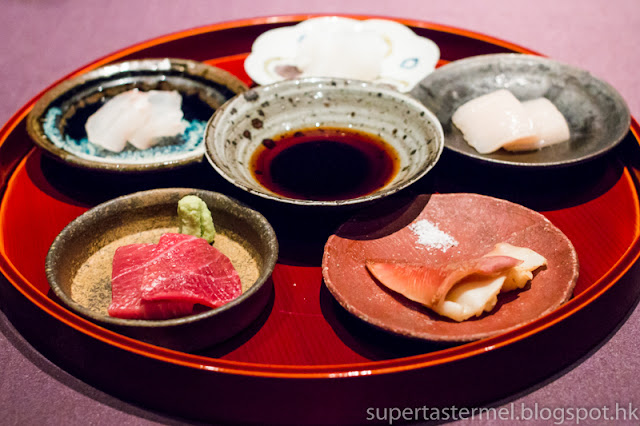 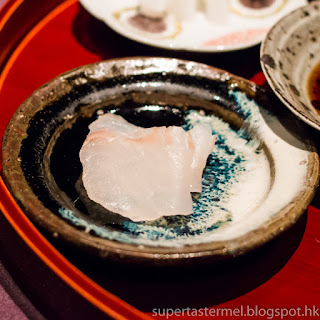 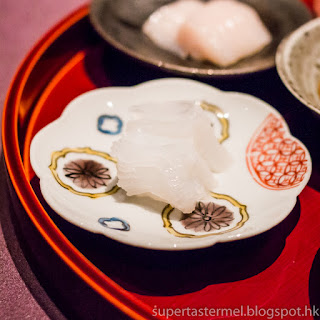 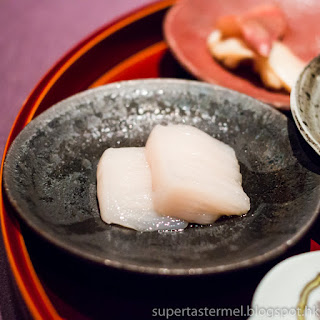 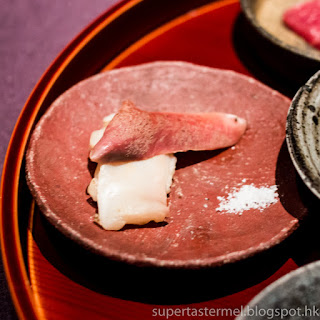 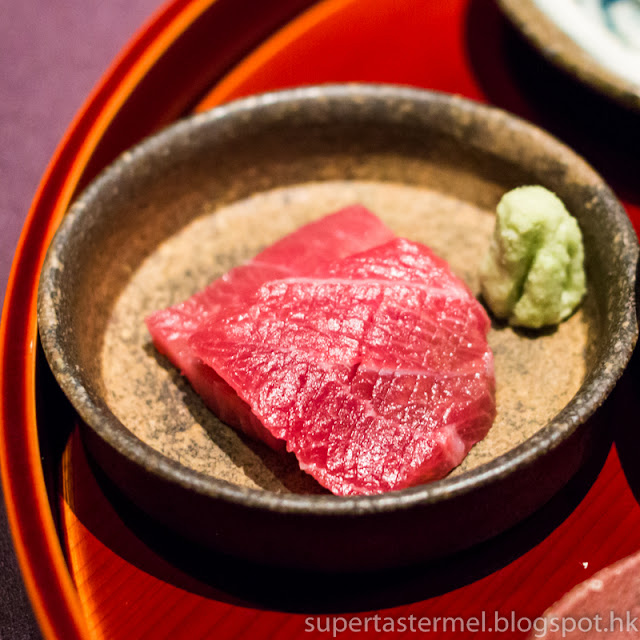 The presentation of the Wild eel plaited with chives and grilled on charcoal was certainly impressive since the eels had been braided but the flavors turned out to be too salty while I wasn't so hot on the chives whose flavor I felt didn't go so well with the eel. 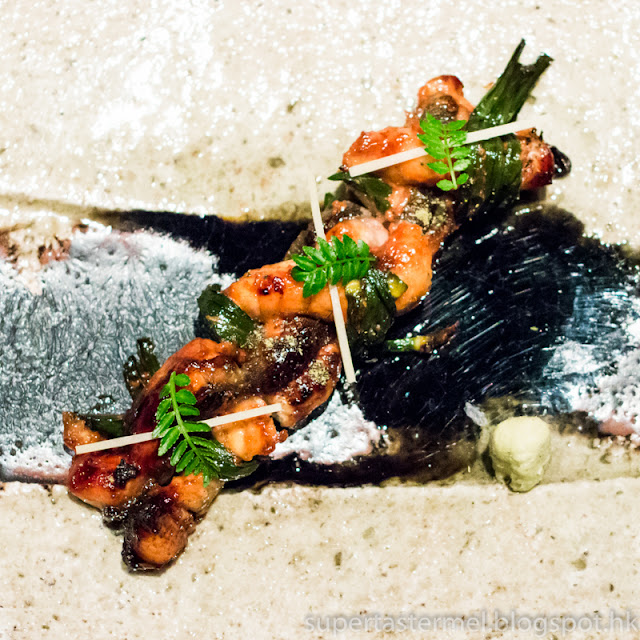 The Cold sweet corn egg custard topped with sea urchin was cool and smooth which was refreshing to eat in the summer but it was a bit too sweet overall between the corn and the uni. 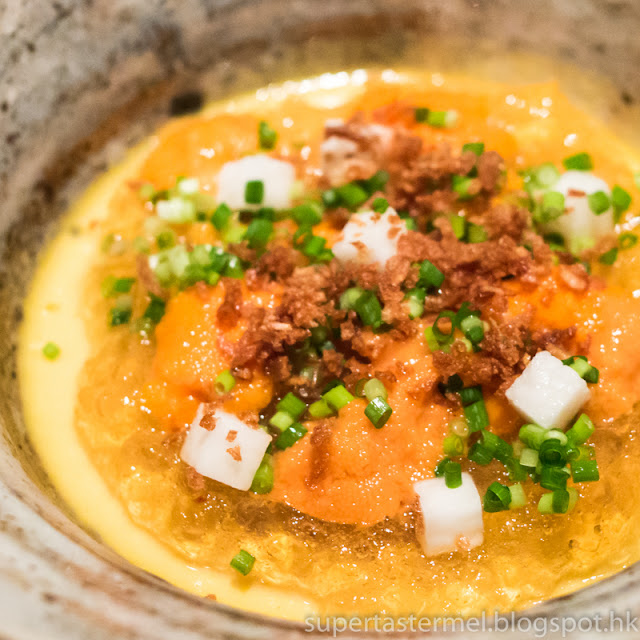 The Wagyu ribeye sukiyaki with onsen tomago had beef that was super soft with a melt-in-your-mouth texture but no surprises in flavor as everything tasted as expected. The Kegani crab with pan fried vegetables on steamed rice was alright but not memorable. 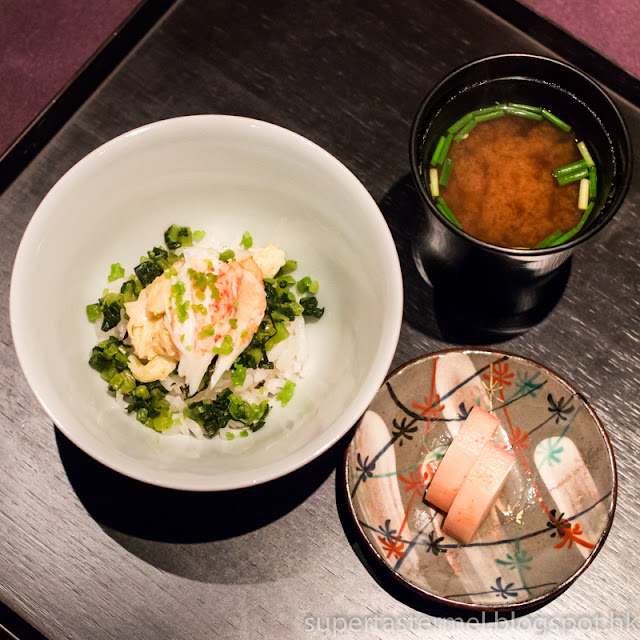 Finally, the food began to shine again with its signature dessert -196°C apple candy and +99°C apple jam where we were instructed to break open the apple candy with our spoon while hot apple jam was scooped on top of the candy. The contrast between the cold powder sugar with the hot apple compote was deliciously stimulating on the taste buds! 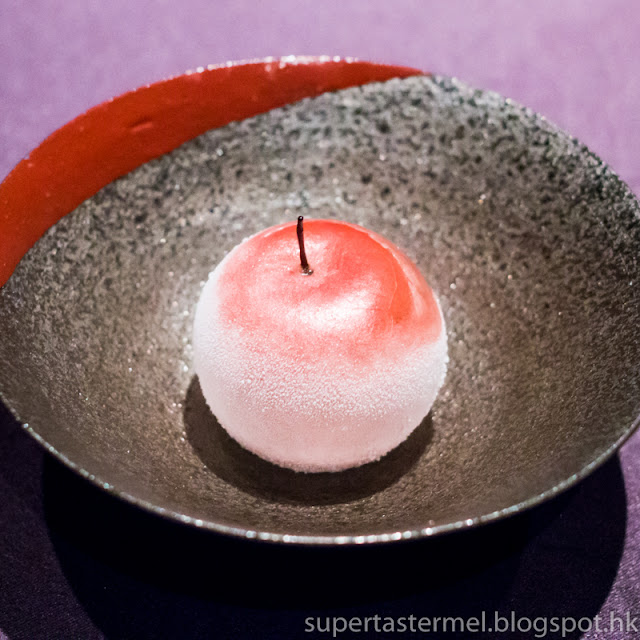 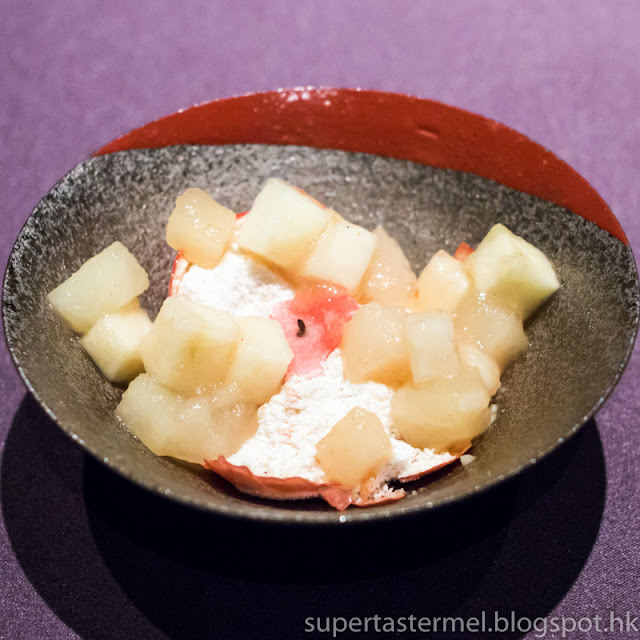 The Melon and Sake Kasu was the last item on the menu which had light and subtle flavors and I wished the sake flavor could have been stronger. 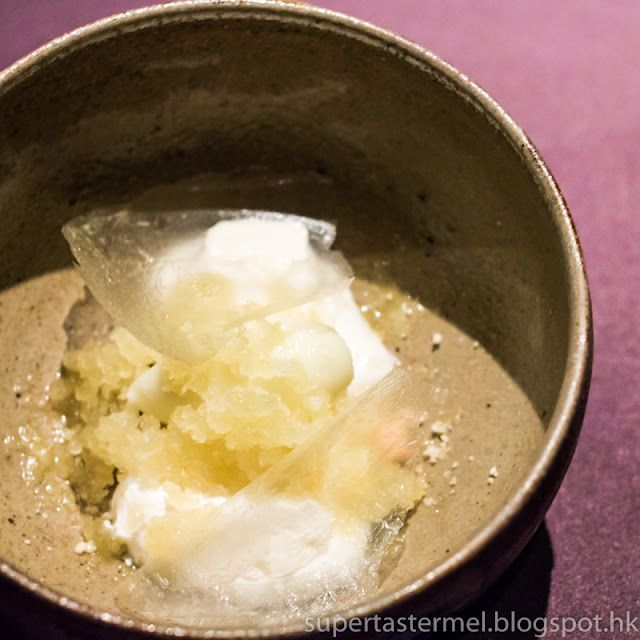 At the end, we were given complimentary matcha which was seriously a joke because it tasted like water. C'mon how can a 2* Japanese kaiseki place not get this right?! 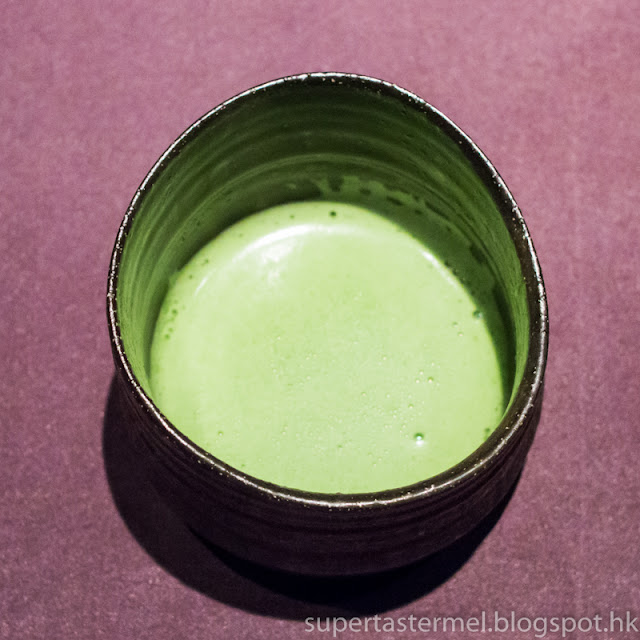 Verdict - to answer my own question on whether or not Tenku Ryugin was worth the price, unfortunately it was a no for me as I wasn't wholly impressed with the food given the high prices. I'm not sure if it was because of the departure of the original chef since it was my first time here but my dining companion had been to the Tokyo Ryugin and she thought that the food at the Tokyo location was better while the view and decor at the Hong Kong branch was nicer.