Shimbashi Kyuu is a hidden gem serving kappo cuisine with almost no signage at all except for a tiny "久" on the wall. Located in a small alley, the restaurant was so inconspicuous that J walked past it before doubling back even though he's been there before. Kyuu is served by Chef Shimizu whose brother runs Shimbashi Shimizu - a popular sushi restaurant located in the same alley. Kappo style cuisine falls somewhere between traditional kaiseki and casual izakaya where the chef prepares the food in front of the customer and serves them directly across the counter. The minimum you need to order here is the Okimari (literally means it's been decided) which comprises of 5 courses that's been set by the chef plus rice. Then you can order more dishes from the a la carte menu that includes fried dishes which I highly recommend here! There were no prices listed on the menu for any of the item but our dinner costs about ¥‎10,000 per person including the required courses, a la carte dishes and drinks. 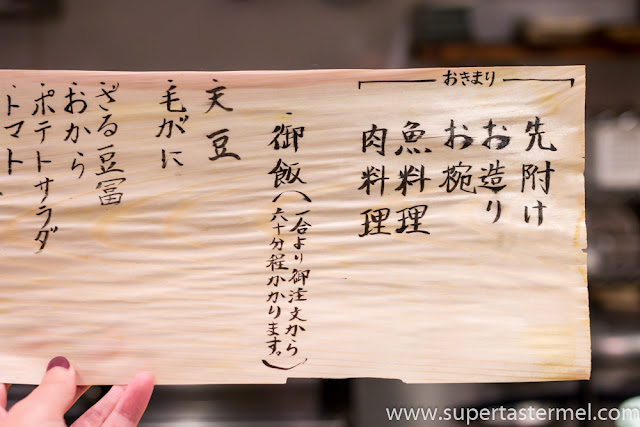 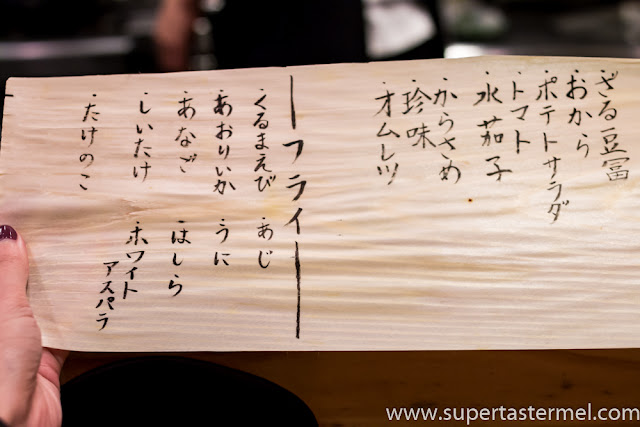 The first course is the 先付け (appetizer) which was a spinach salad with fresh torigai, firefly squid, akagai and aori-ika tossed in a delicious tamago miso sauce. 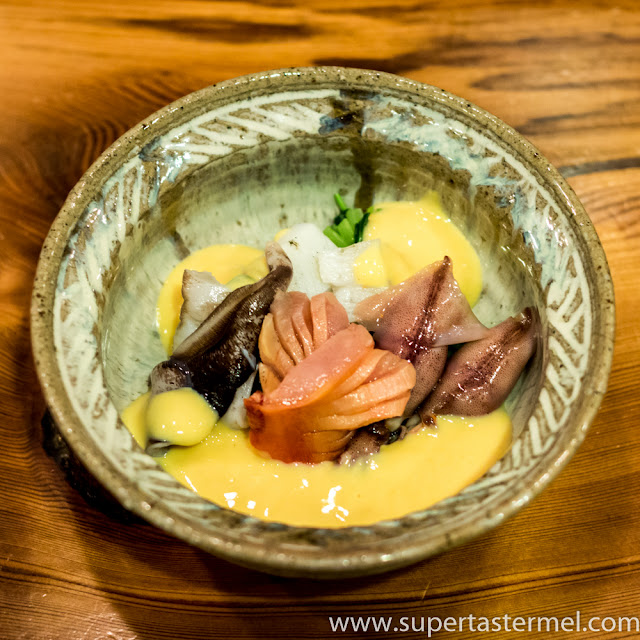 The お造り (sashimi) comprised of hirame, aji and maguro naka-ochi which is tuna backmeat near the bones of the fish. We were instructed to wrap the tuna in seaweed and dip in the soy sauce to eat. I had fun eating this part of the tuna once before at Jige where I used a seashell to scrap the tuna right off its bones! 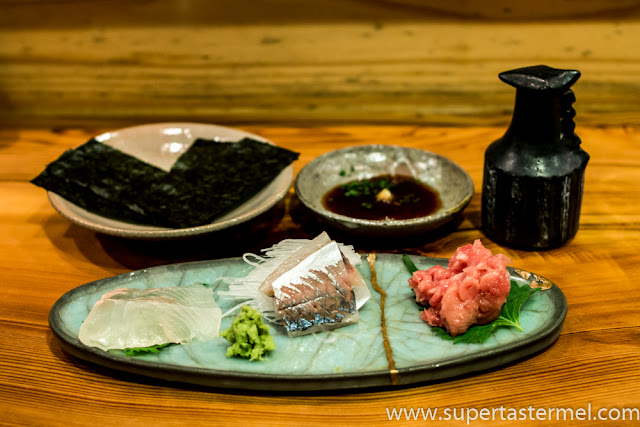 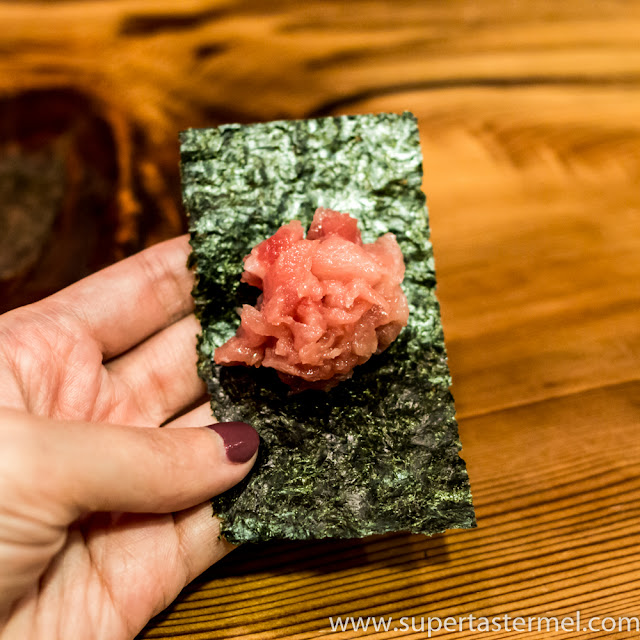 The お椀 (soup) was a clear broth with a crab dumpling, mushroom and yuzu flower. The broth was soothing to drink but it was the amazingly delicious crab dumpling that stole the show here! 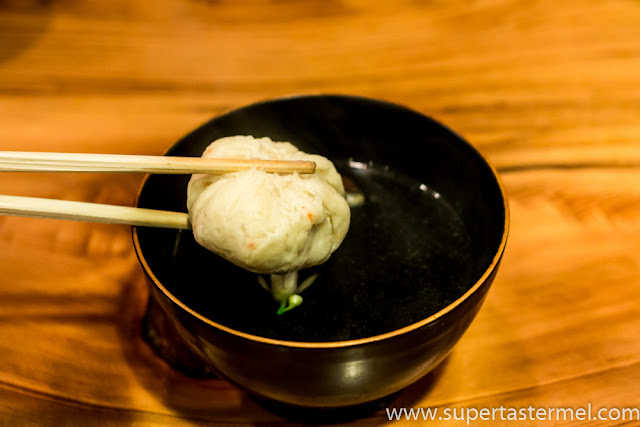 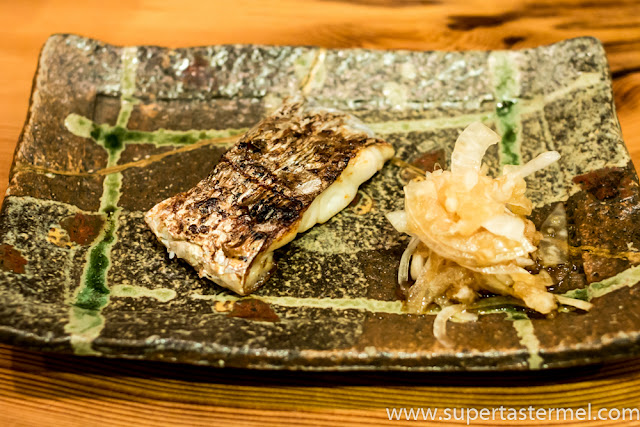 The 肉料理 (meat course) was a beef sukiyaki with raw quail egg yolk and spring truffle shaved on top. 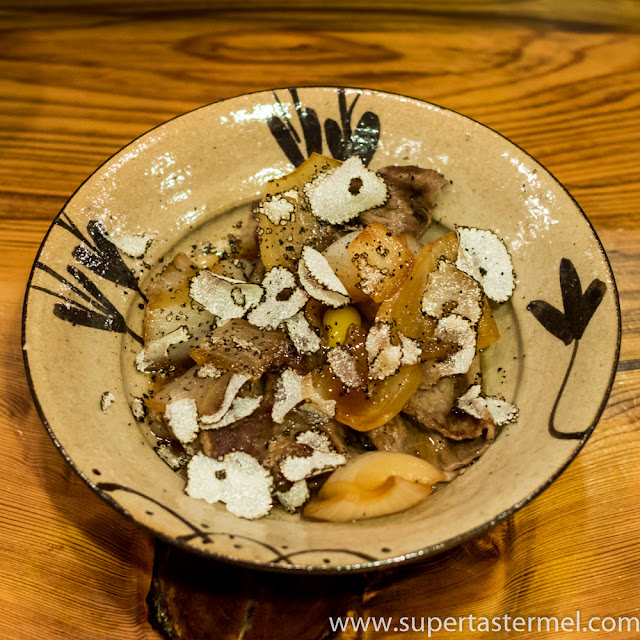 The last dish of the set course was the rice which was cooked in a clay pot on the stove. We saw the chef smelling the steam sprouting from the pot in order to determine if the rice was ready. I never knew that you can do that and that's why it's so enjoyable to watch the chefs work in an open kitchen because everyone has their own tricks of cooking. 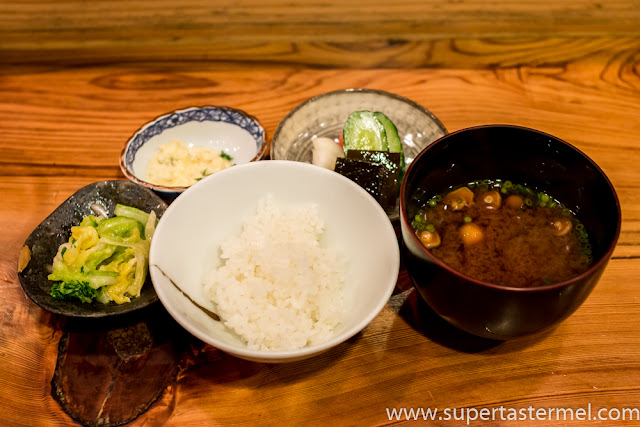 The course usually fills you up to about 70-80% full so we started ordering from the a la carte menu staring with this Karasume (salt-cured mullet roe) served with vermicelli. I've had a similar version of this at Ginza Shimada which used soba instead and I think both are equally good while J thinks that this version was better than Shimada's. 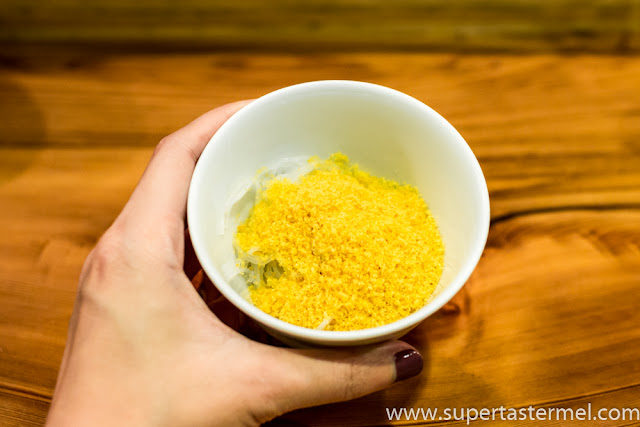 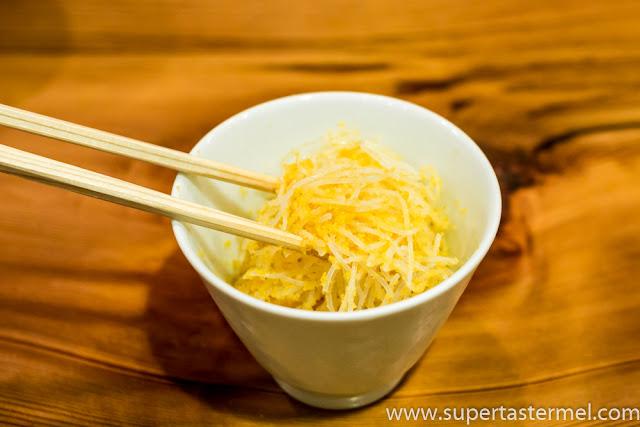 We then ordered a series of fried dishes which are highly recommended here as the execution was superb with thin and crispy batters. I couldn't help but order the Fried Uni wrapped in shiso leafs which is not the best way to taste the natural flavors of this delicacy but the molten texture of the sea urchin was a delight to eat! 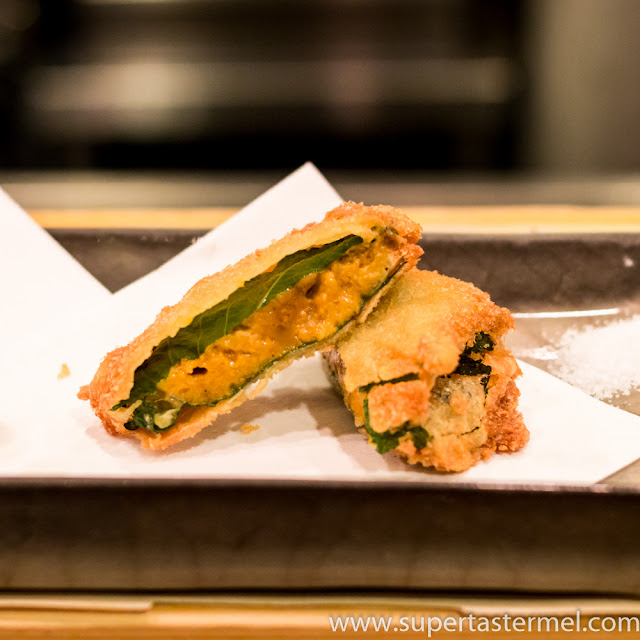 The head and the body of the Kuruma Ebi was served separately and yes you can eat the entire head of the prawn. 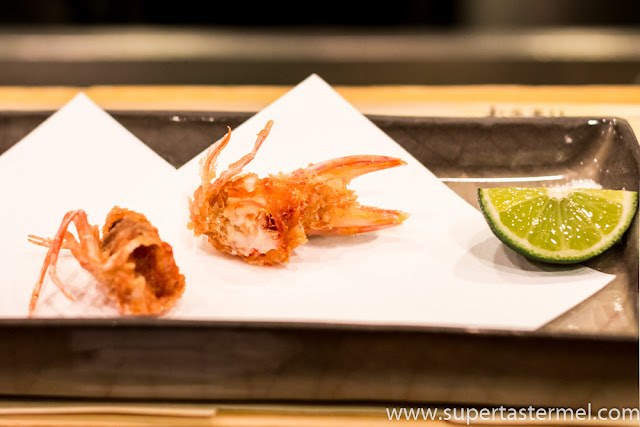 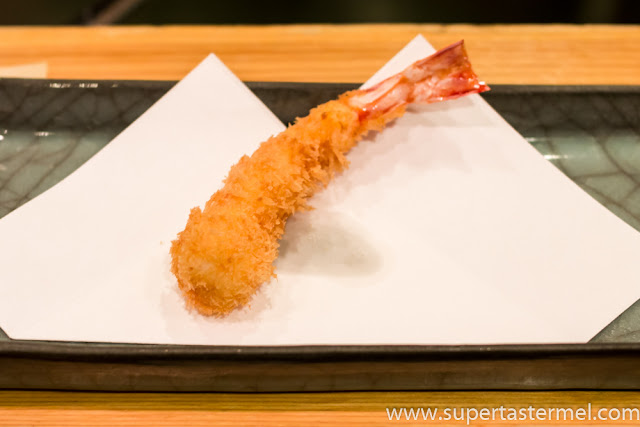 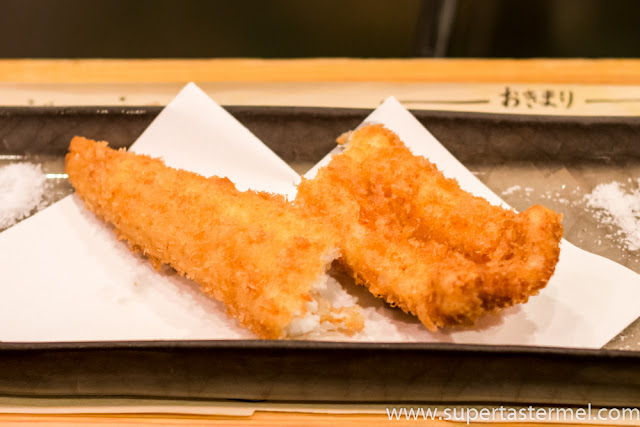 The Hotate (scallop) was still semi-raw on the inside. 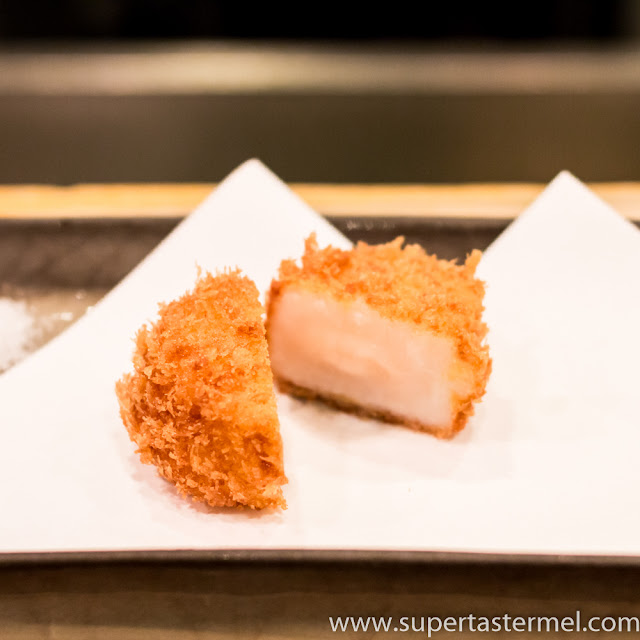 Lastly, we were served a sweet chocolate mousse with strawberries to wrap up our meal. 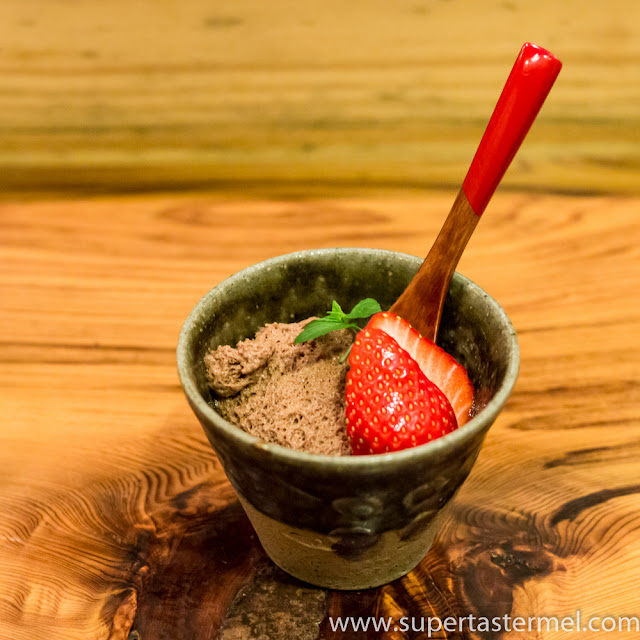 I had a lovely time eating at Kyuu as the cozy environment made me feel like I was eating at the chef's house, who was super friendly as well. It's a great way to get off the beaten track away from the tourist crowds and explore the hidden gems in this city!