I'm back in Tokyo again and my first dinner is at Daisan Harumi Sushi by Chef Kazuo Nagayama - a sushi chef who has over 50 years of experience and is an author of several books on sushi. While he may not be as famous internationally as Jiro and some of the other Michelin starred sushi chefs like Saito and Sawada, Chef Nagayama is highly regarded locally in Japan for his craft and knowledge as his restaurant is consistently ranked in the top 20 on Tabelog for sushi in Tokyo! The restaurant interior is modest and shows it age with a sushi counter that seats 9 and a private room with several tables upstairs. The chef apparently makes all of the ceramic cups and plates that he uses in the restaurant as well as hand-writes his own menu with details of where and how the ingredients were fished and harvested. We were given a copy of the menu at our seats and the chef insisted that we take it home with us when we were leaving. Initially, I was a bit intimidated by the chef but he turned out to be really friendly when he found out that I didn't speak Japanese and instructed his staff to hand me cards with detailed information on all the fish he was serving to me in English. Like most high end sushi restaurants, only omakase is served here and dinner starts from ¥20,000. ‎ 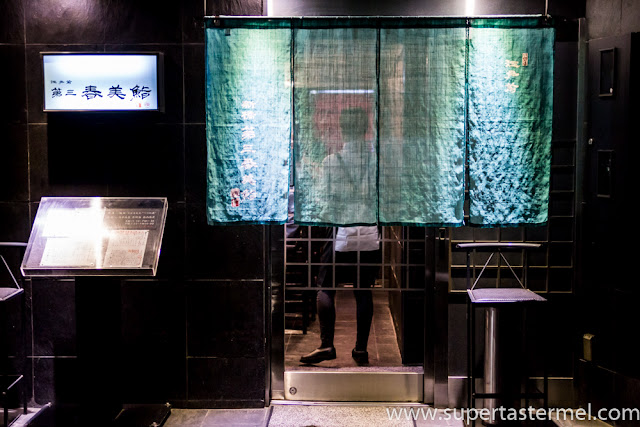 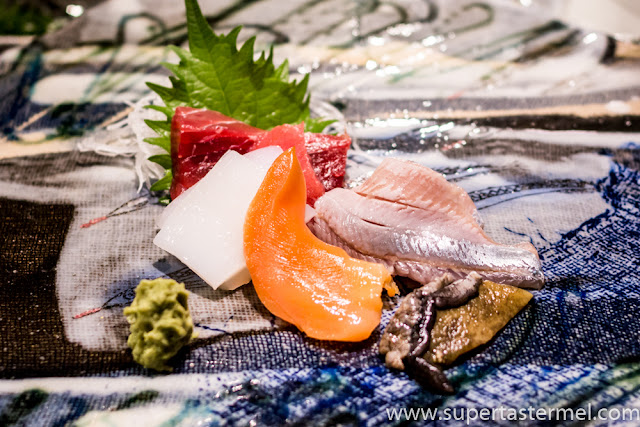 I was surprised to receive a piece of steaming hot Tamago when I was still finishing up my sashimi as the egg is usually served at the very end to signify the end of a sushi meal. I then realized that the chef definitely has his own way of doing things because even the otsumami (appetizers) didn't all come before the sushi like other sushi-yas I've been to - rather we ended up getting some of them in between the sushi pieces. The tamago was really good though as it was moist, fluffy and slightly sweet to eat. 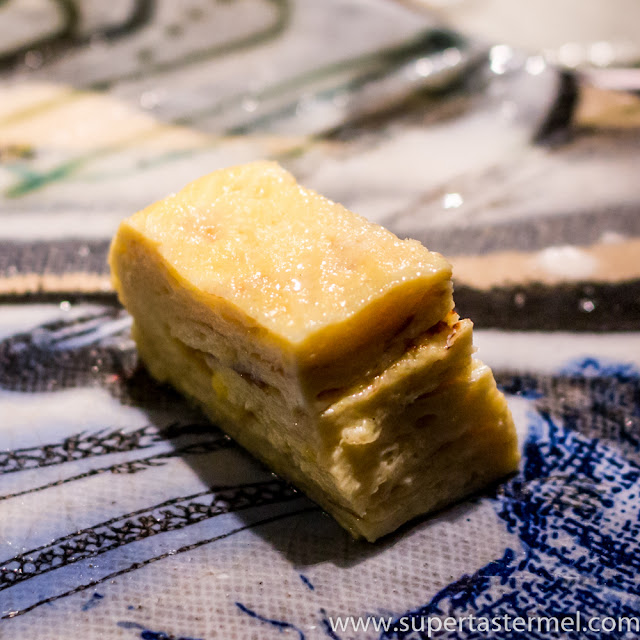 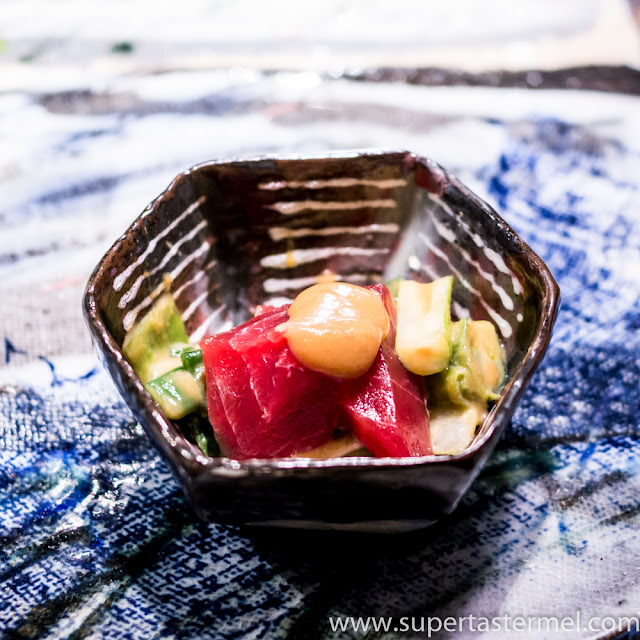 We were instructed to be generous with the wasabi on the Grilled Anago as the eel would have enough fat to balance it out. The anago was splendid with a plump bouncy texture and subtle flavors that lingered in the mouth afterwards. 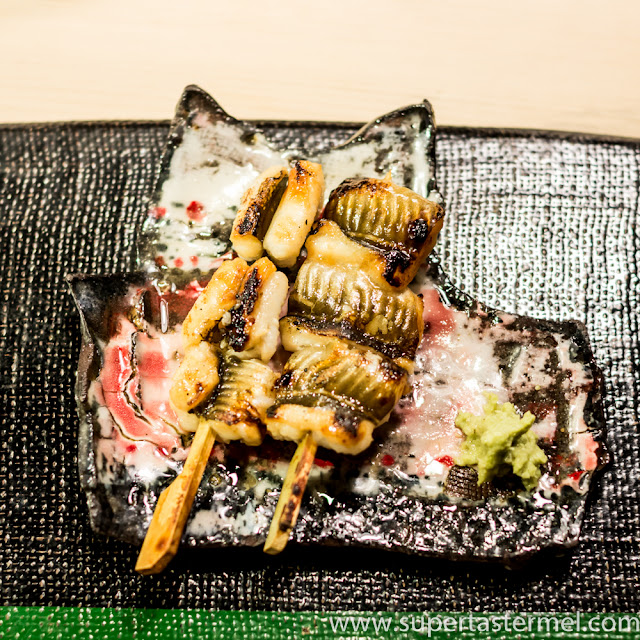 As we moved on to our sushi courses, we were given ceramic serving plates and I was in love with this gorgeous pink lily pad that I got! Every single serving plate was unique and J got one that was white with gold and blue design. In the back, you can see some of the informative note cards on different types of fish in both Japanese and English. 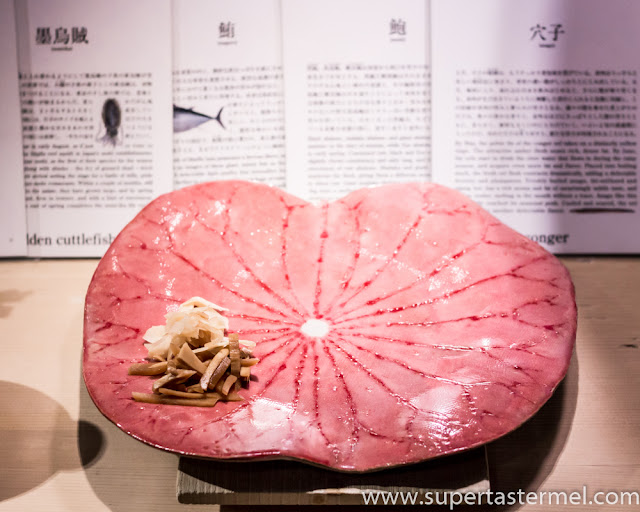 Our first sushi piece was Nishin which is a baby herring that usually appears in markets at March and has a more refined quality than its cousin the Japanese sardine. While the ratio of the shari (rice) to the neta was just right, the size of the nigiri in general was quite generous so be prepared to be full afterwards. 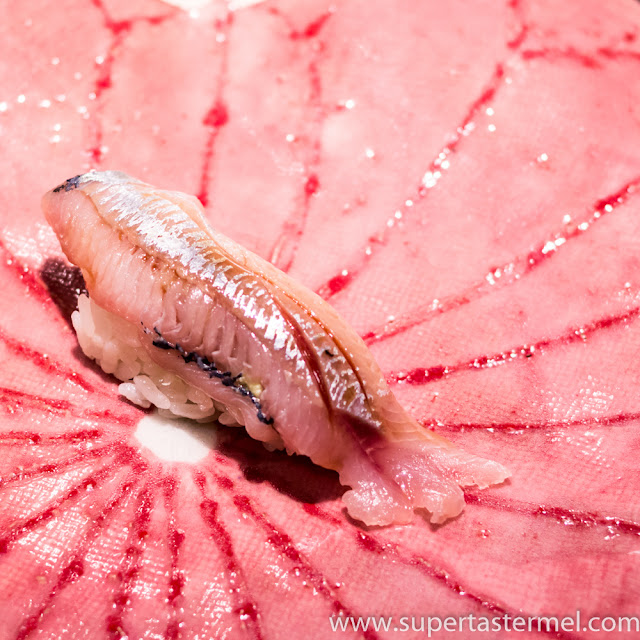 The Makogarei (marbled sole) is a white fish that peaks from early summer to start of autumn which was tender with a delicate sweetness to it. 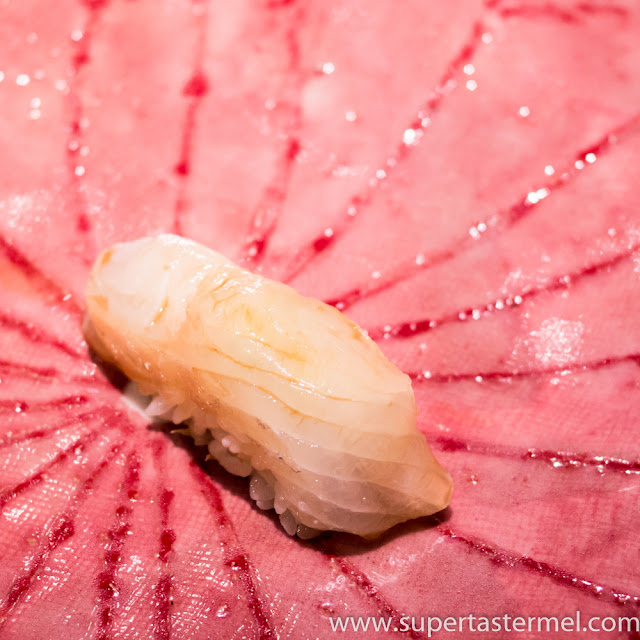 While we were waiting for our next piece of sushi, we were given this grilled piece that came from the tail of a nishin. 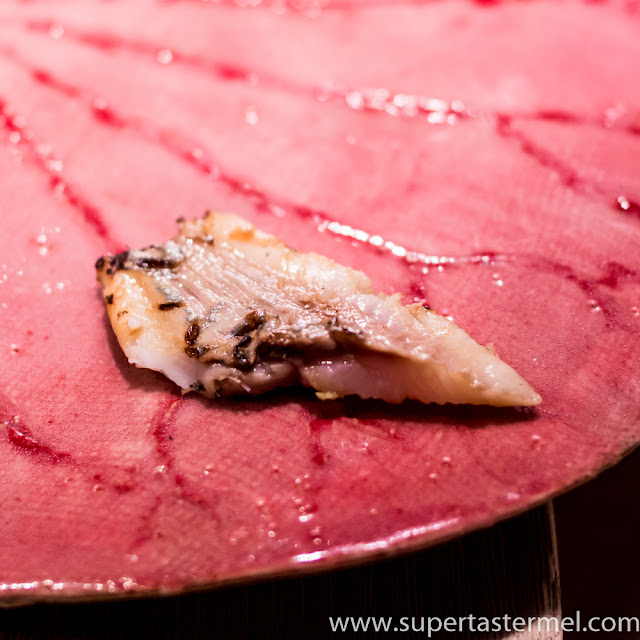 The Otoro (bluefin tuna) tasted like heaven as the fatty flesh simply melted in the mouth. 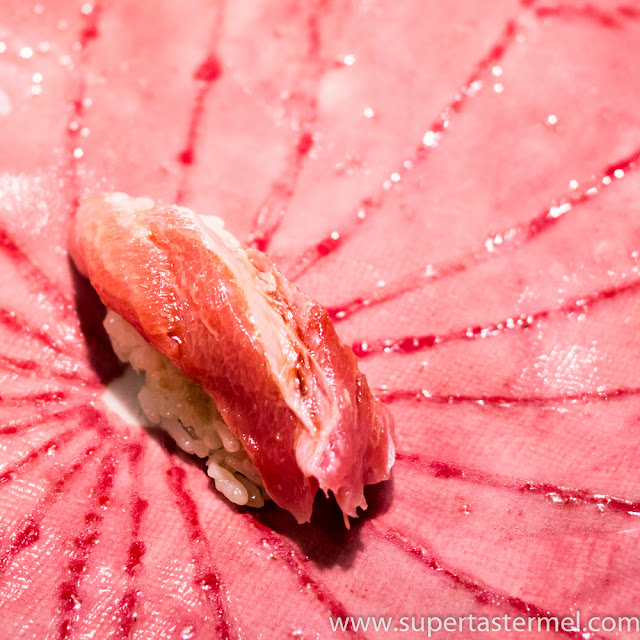 Even though the Kohada (gizzard shad) tastes best from mid-autumn to early winter, it can be used all year round by adjusting the amount of salt and vinegar curing to bring out its true flavors. 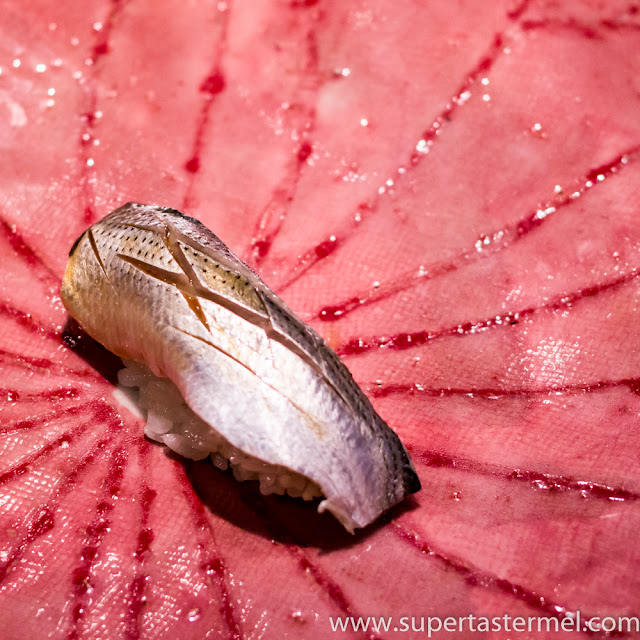 The Kuruma Ebi (tiger prawn) was big with a firm and plump texture but I wished it had been cut in half for easier consumption. 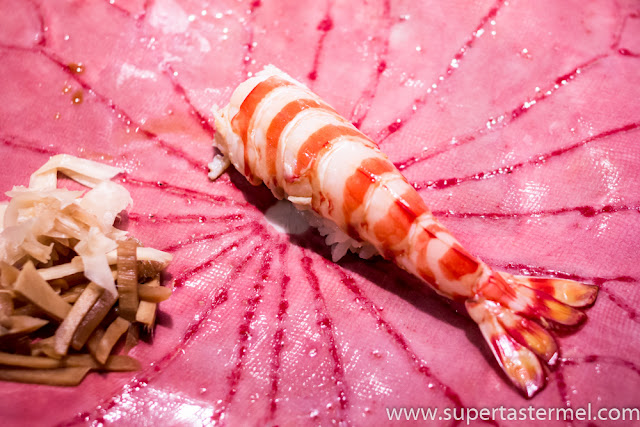 The next dish is apparently a signature with crunchy shrimp heads that had been charcoal grilled to a crisp so that the entire head can be eaten. 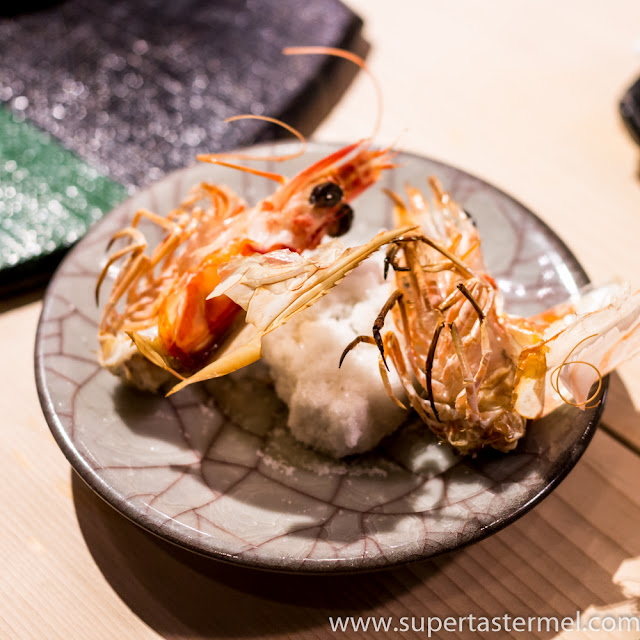 This was the sides of the Aoyagi that we had in the very first sashimi course which was deliciously sweet and chewy to eat. 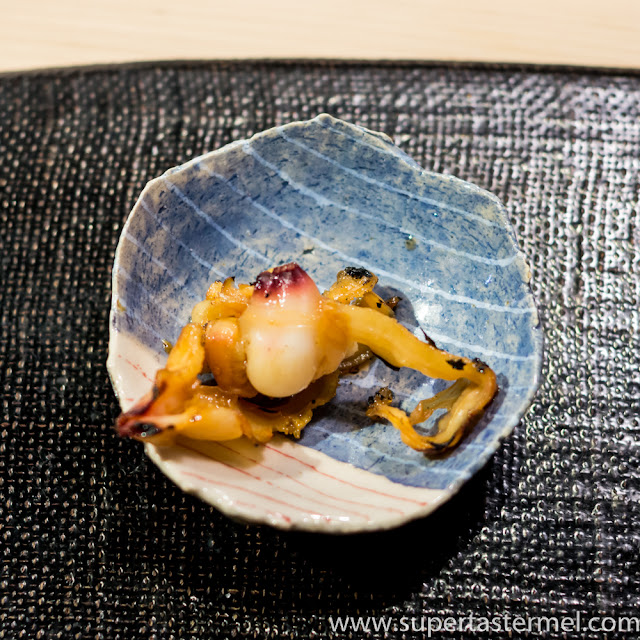 The Uni (sea urchin) is not really in season now so while it was still delicious, the texture of the uni was a bit watery for me. 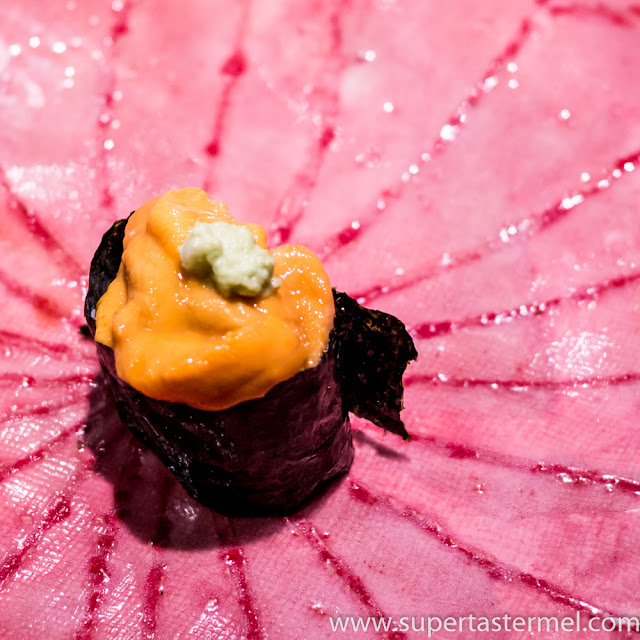 The chef had squeezed a bit of sudachi juice on the Anago (conger eel) which gave the fish a hint of refreshing citrus flavor. 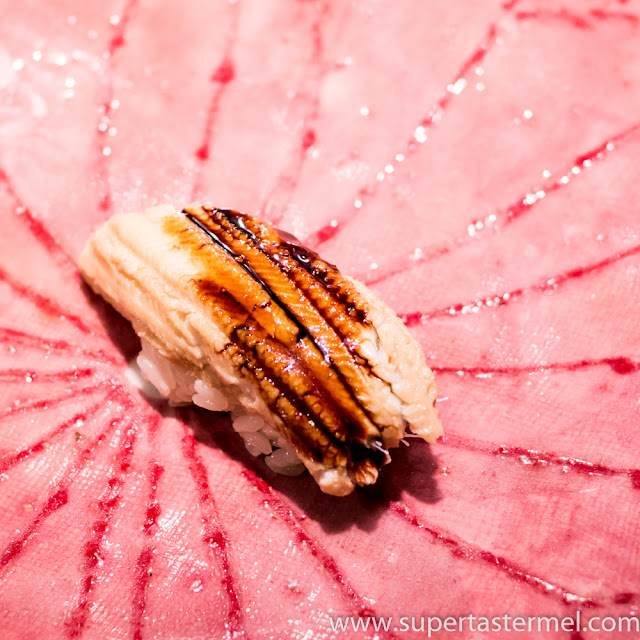 For our last course, we were handed a Tuna Temaki with instructions to dip the seaweed (not the rice) into the soy sauce for seasoning. If I had to compare, I though that the tuna hand roll from Sushi Tokami was better because they used a special cut near the tuna's neck which was extremely creamy and flavorful to eat. 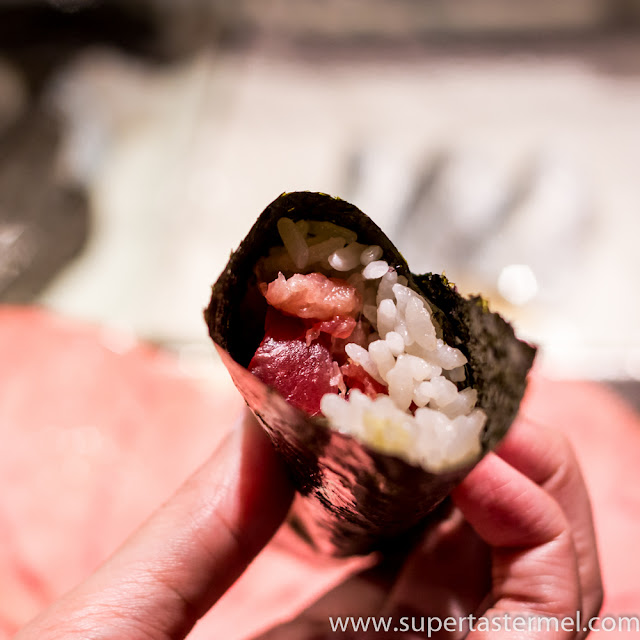 Lastly, our dessert comprised of clear jelly with matcha tea. 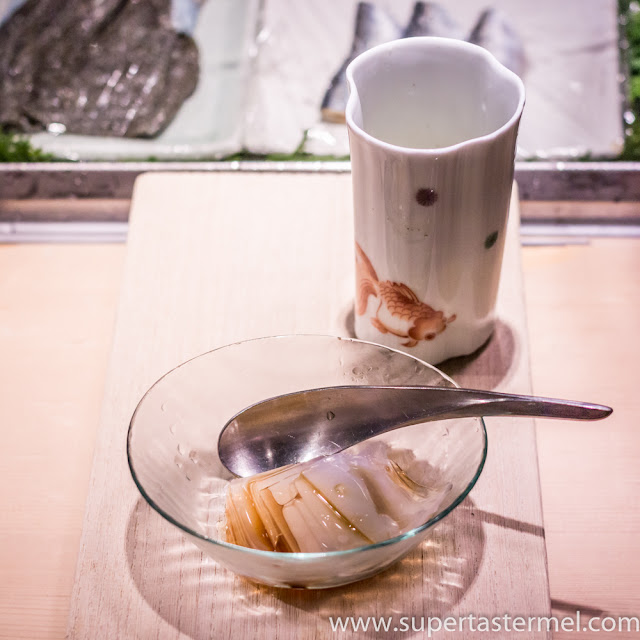 While I enjoyed the food at Daisan Harumi, I had a hard time collecting my thoughts on my overall experience though. There were parts that I was fond of like the food and the friendly service with the English note cards but there were also parts that I didn't like such as the not-so-gentle way that the chef places the sushi on my plate and the shari was a bit too loose which fell apart for some pieces as it made its way to my mouth. The order in which the food came out was also a bit chaotic and we were confused that we never got some of the dishes that our neighbors got. So when J asked me what I thought at the end of the meal, I hesitated for a moment and then pointed to the ceramic cup I was drinking tea from and told him that I thought the chef was like this cup - a bit rough around the edges and not quite refined but certainly unique in his own ways. 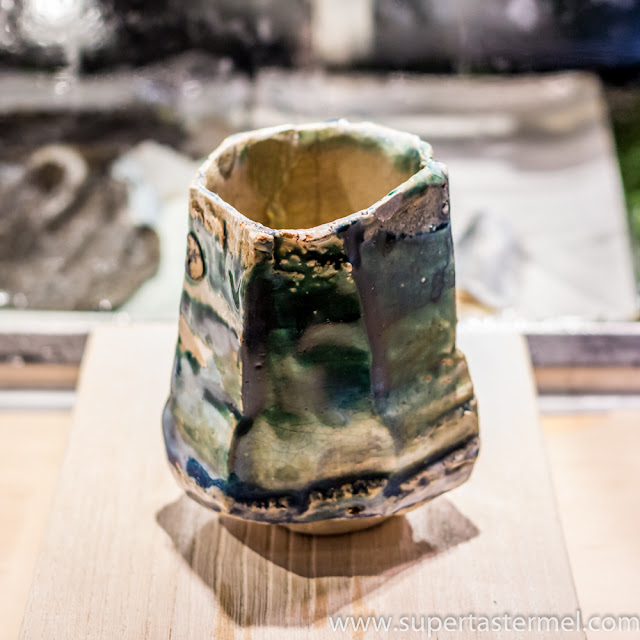