The next day, we took an one-hour drive to have lunch at Asador Etxebarri in the beautiful Basque countryside! The 1 Michelin-starred restaurant is currently #10 on the World's 50 Best Restaurants and the chef Victor Arguinzoniz is all about the grill so almost every dish has an element of fire to it. The remote location is befitting of the restaurant's goal to preserve the ancient techniques of grill cooking by using carefully selected firewood to work in harmony with the local produce. The drive from San Sebastian to the restaurant was pretty scenic for the most part but as we got closer, our driver mistakenly took the back roads and our car almost got stuck on the rocky path - it was a scary moment but we made it in one piece at the end!

The restaurant serves lunch from Tuesday to Sunday and dinner only on Saturday. The menu changes daily depending on which seasonal products are the best that day - you can choose from a la carte or the tasting menu with 16 courses for 135€. We opted for the tasting menu and the matching wine pairing for an additional 38€. 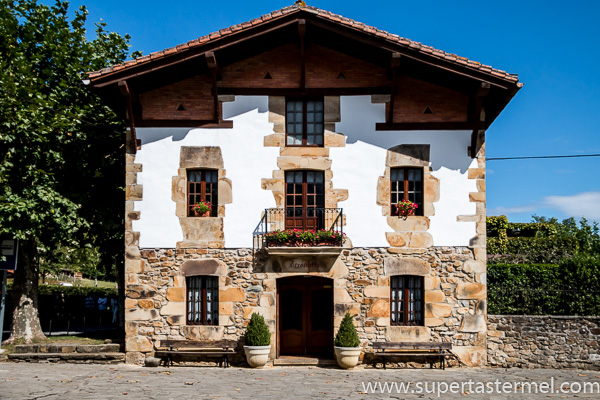 The restaurants faces a lovely church and courtyard with Mount Anboto in the background. 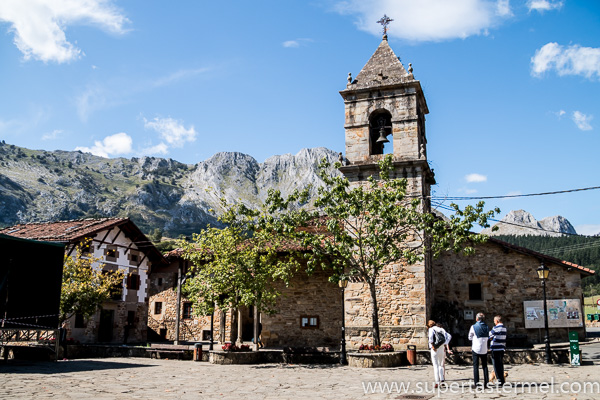 We waited by the bar on the ground floor for a bit before we entered the main dining room on the first floor. 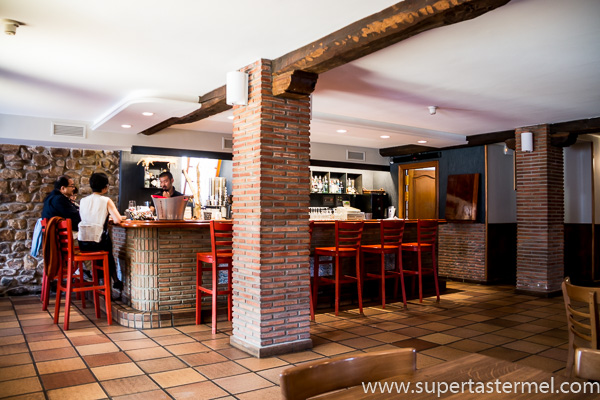 We were one of the first to arrive so we had our choice of tables, and we sat right by the windows so we can gaze out at the majestic mountains. 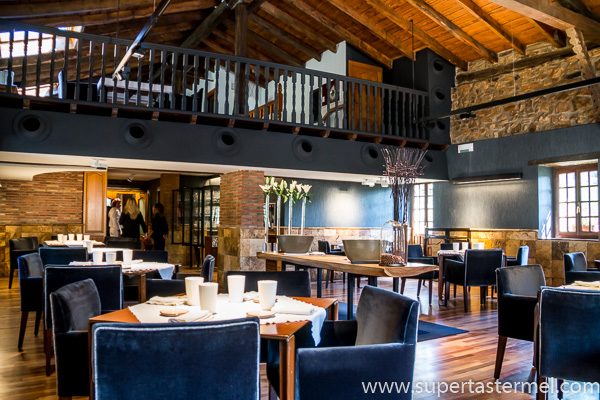 The bread basket came first with our choice of freshly made regular and wheat baguettes. 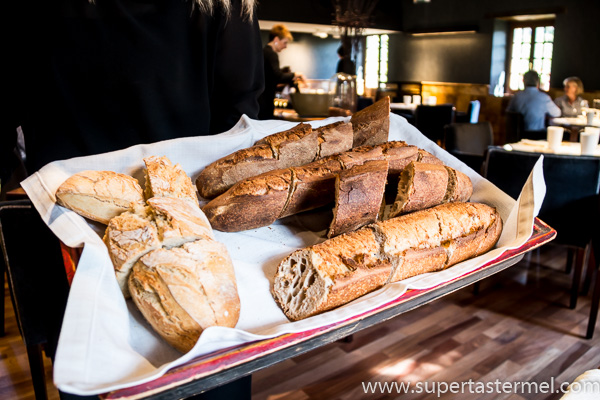 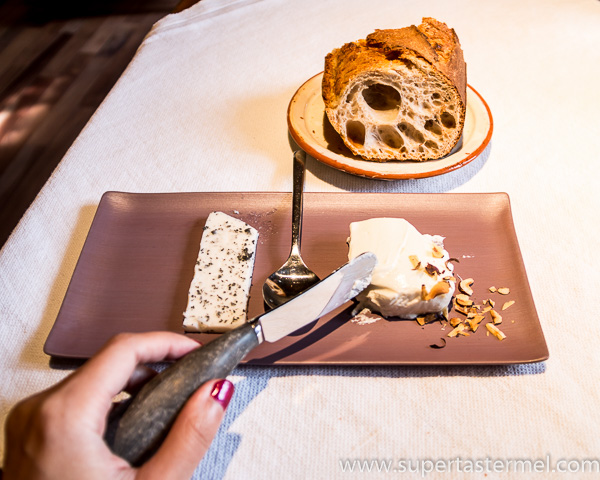 The salted anchovy on toasted bread turned out to be one of best anchovies I've ever had! 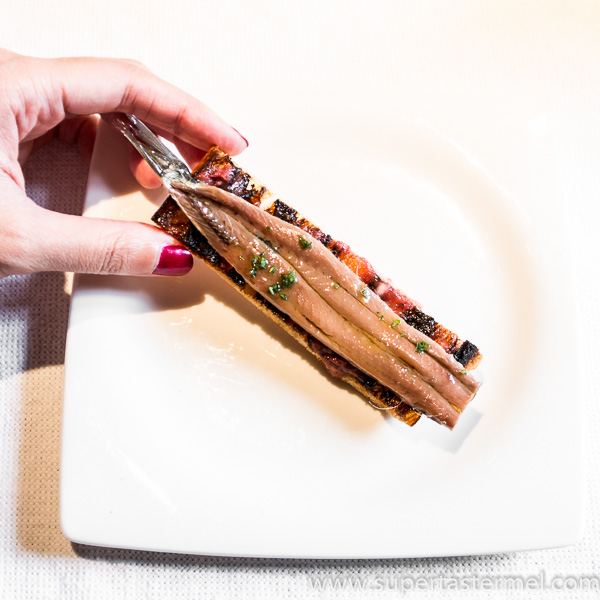 Two different types of chorizo arrived smoking on a metal plate - both were deliciously to eat with an apparent smoky aroma. 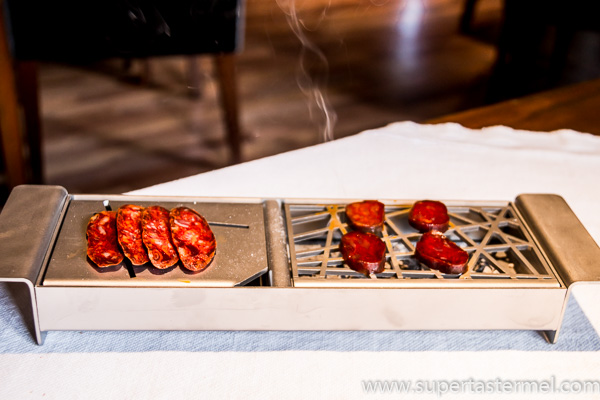 The corn croquette was surprisingly tasty with a very crispy crust and sweet creamy filling. 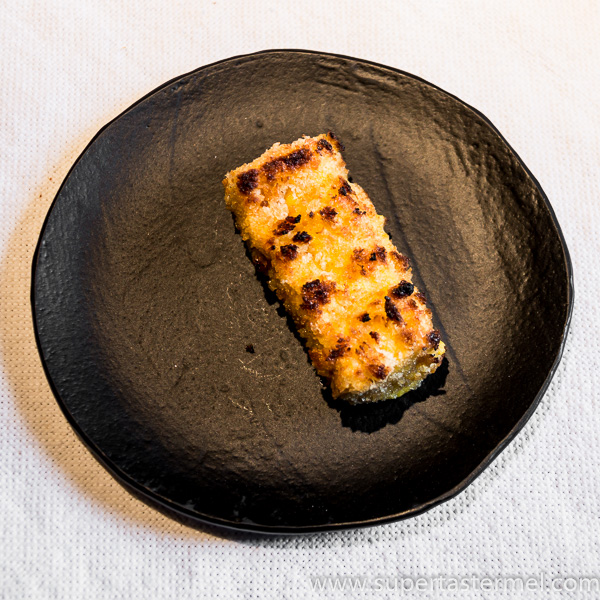 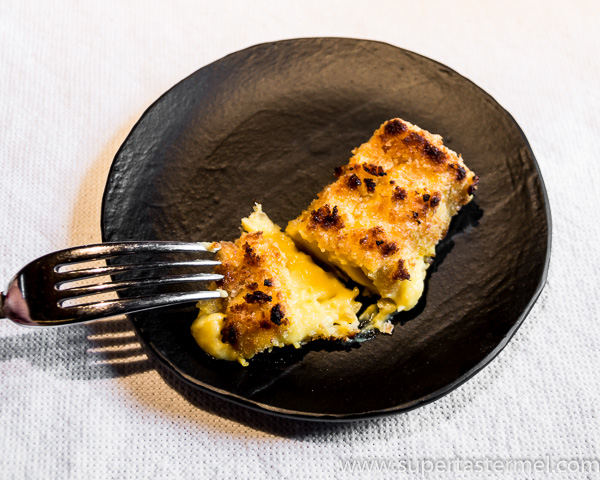 The tomato with spring onion and basil was decent but I've had better tomatoes and tomato water in Copenhagen. 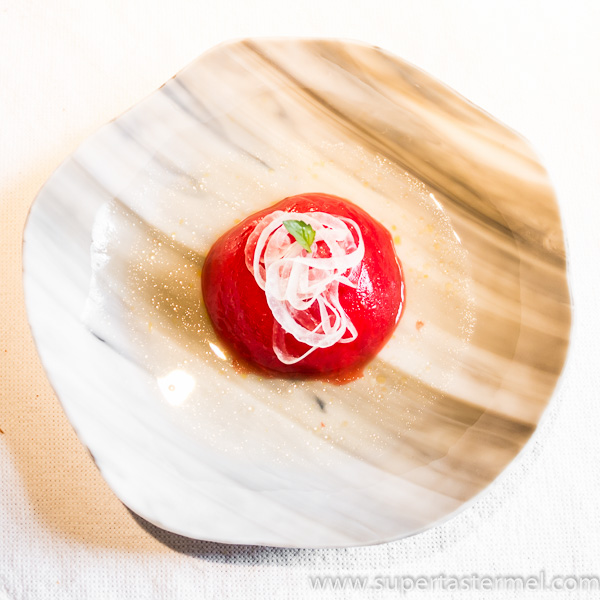 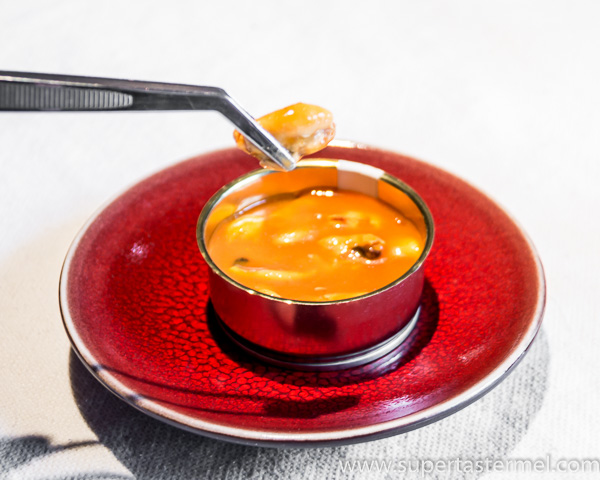 We had been served Spanish wine for most of our wine pairing so imagined our surprised when we were served a homemade IPA beer made by the chef for one of the pairings! 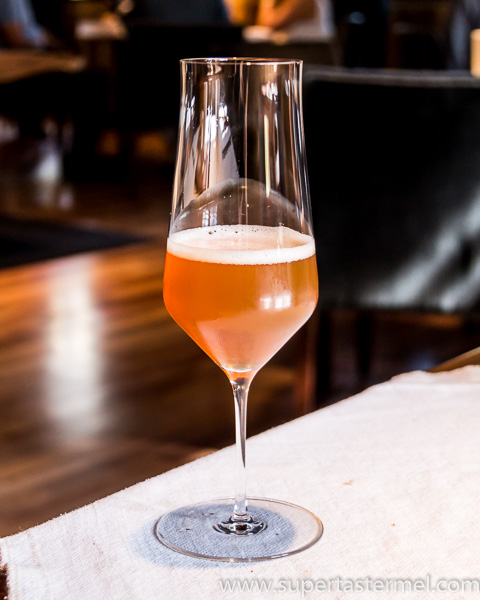 The chlamys varia with caviar was lovely and packed with flavors. 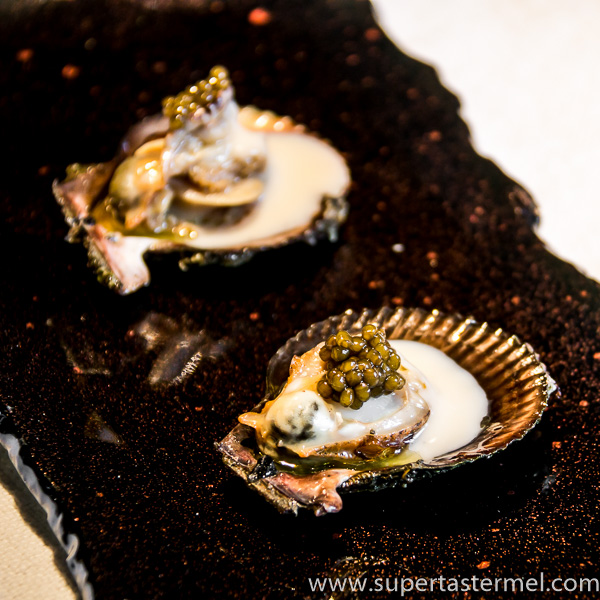 The next course had me going "wow" at first bite! The Palamós prawns were unbelievably delicious and simply heavenly to eat - even the dark pink innards in the prawn's head were super flavorful and unlike anything I've tasted before! 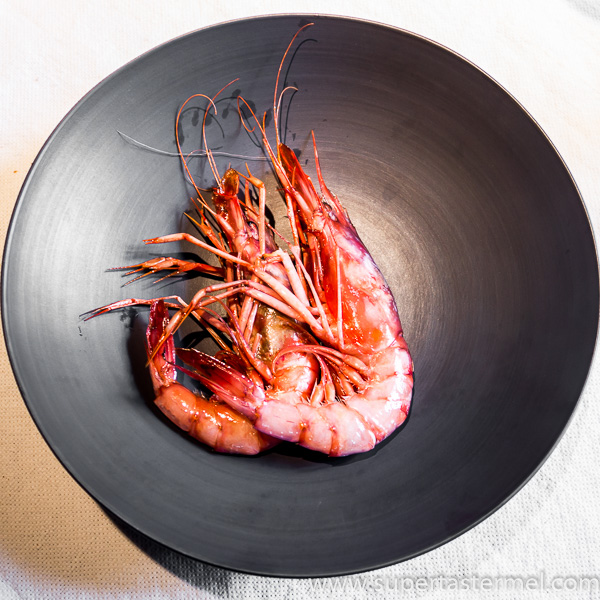 The baby squid and ink was another solid dish. 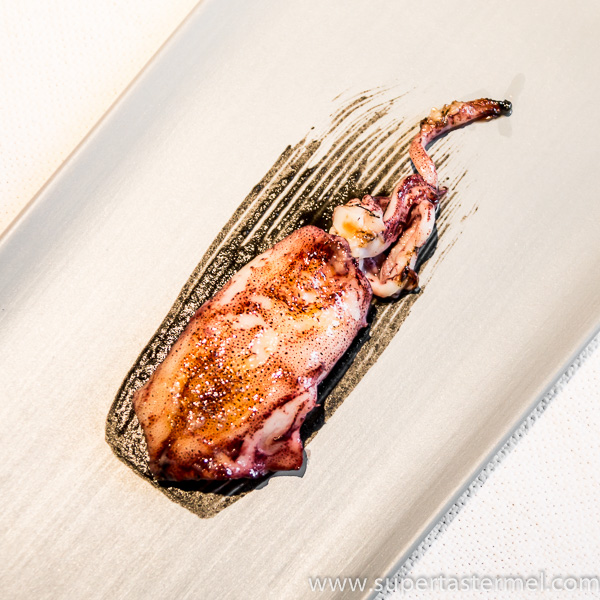 The king bolete and aubergine took us by surprise as the combination worked perfectly together and again the smokiness here was a delight to the taste buds. 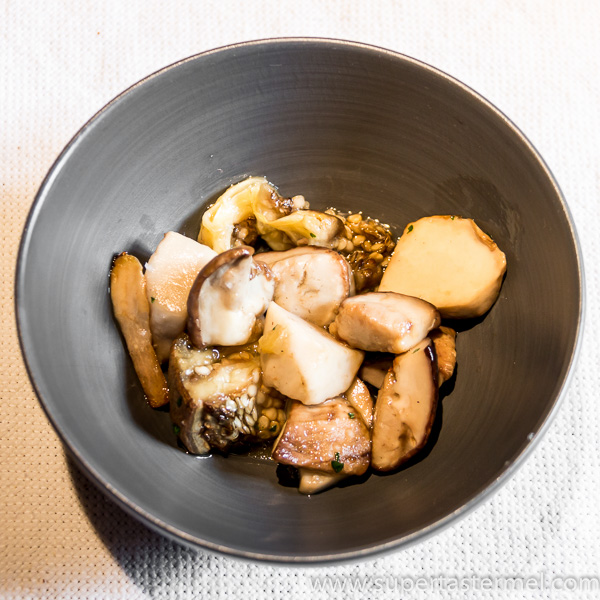 The white tuna belly and cherry was less impressive in terms of flavors though as it was a bit bland but the texture was soft and flaky. 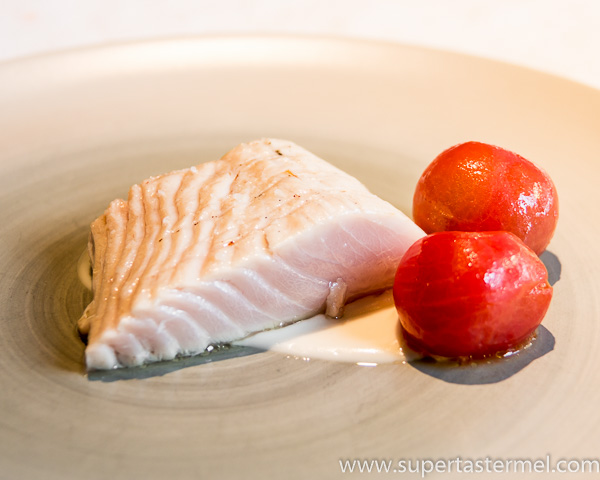 The beef chop turned out to be the biggest disappointment of all as it was really tough and chewy. At first glance, it looked promising with its super beautiful and crispy crust but the meat was too tough and not that flavorful compared to Japanese beef which has become my gold standard for steaks. I chewed a few pieces for a long long time before I gave up and had to spit it back out. 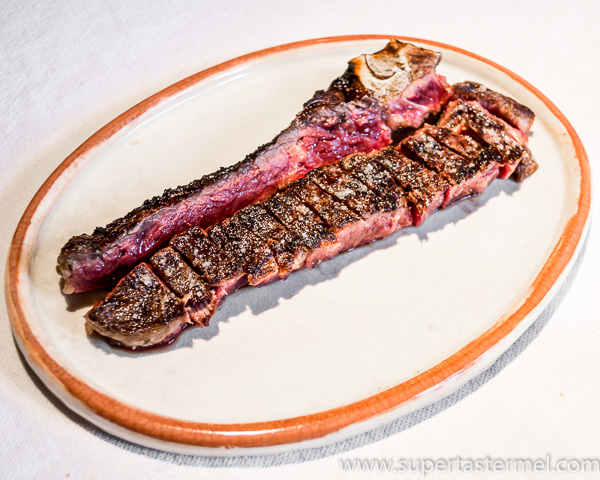 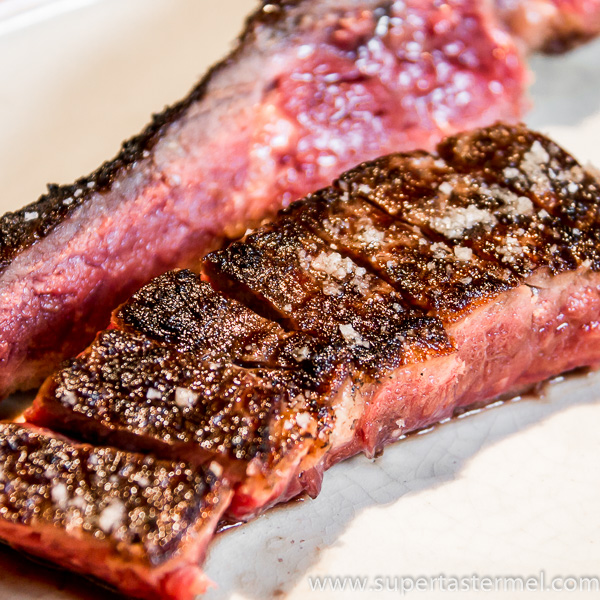 The reduced milk ice cream with beetroot juice redeemed the meal somewhat as it was very refreshing and I was especially in love with the beetroot juice which tasted really fresh. 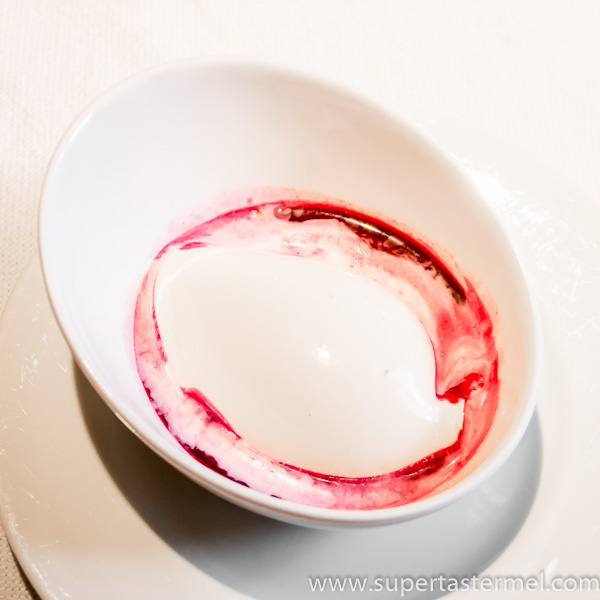 The poached pear with caramel flan served as a nice ending to our meal as it was not too sweet and well-balanced in flavors. 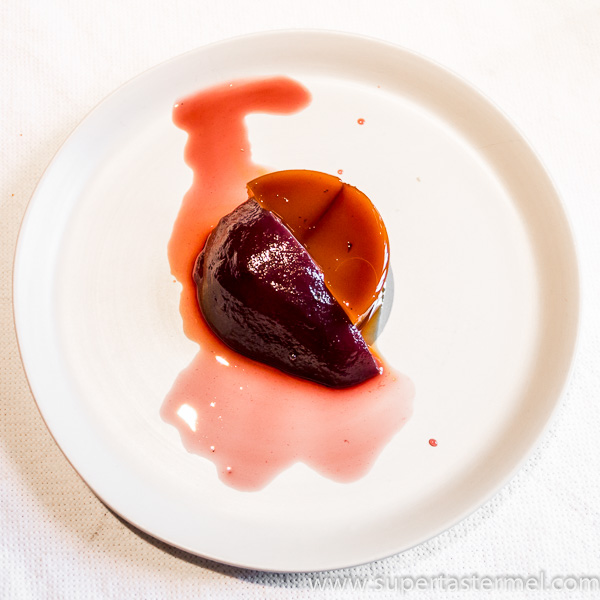 The mignardise was a shot of hot cocoa with mini muffins. 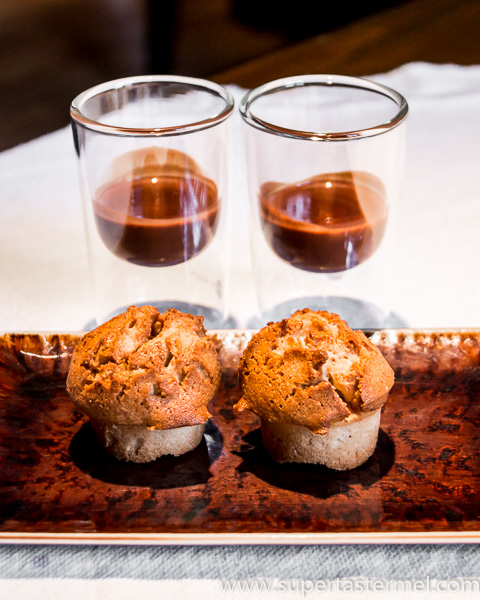 If someone were to ask me to describe the food in one word at Etxebarri, "simplicity" would be the first word to pop to mind. In the era of fine dining with fancy plating and molecular gastronomy, I can understand the appeal of sticking to the basics and letting the freshest ingredients to speak for itself. Etxebarri really is something else among all the Michelin-starred restaurants in the Basque Country and I get why people love this place but for me, the meal wasn't the best or extraordinary by any means. Some dishes were fantastic, some were okay and one was just downright disappointing. The service was also off-putting as the staff didn't speak any English and dishes were just placed on the table with no explanation so they came across as cold and indifferent. It would have been a better dining experience if we could understand more about what we were eating and how it was prepared since we had traveled a long way to be there, but I guess you can't have it all sometimes.