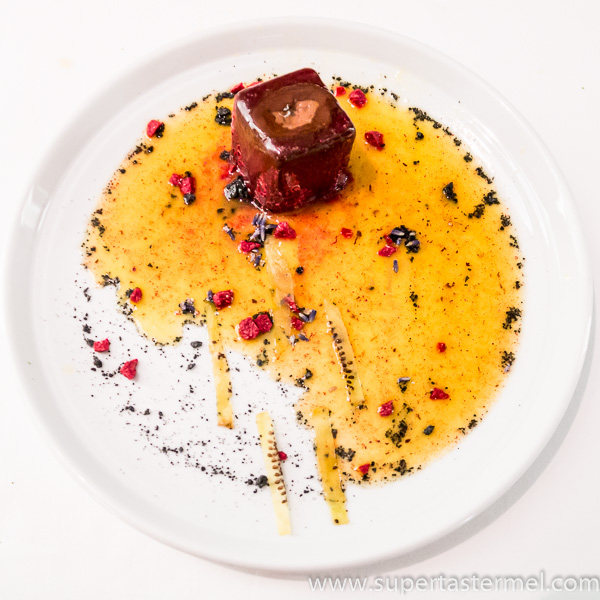 After eating at Ibai for lunch, we headed to Arzak for dinner which has held 3 Michelin stars since 1989 and is currently #21 on the World's 50 Best Restaurants! The family-run restaurant is currently operated by father and daughter Juan Mari and Elena Arzak where Juan Mari is considered to be a leading figure of the New Basque Cuisine (nouvelle cuisine basque) movement which has influenced international cuisines around the world while Elena has been recognized for her skills as the winner of World's Best Female Chef in 2012. We didn't see Juan Mari at the restaurant that night, but Elena was there and she explained the menu to us which comprised of a la carte dishes and a tasting menu with 8 courses for 205€. 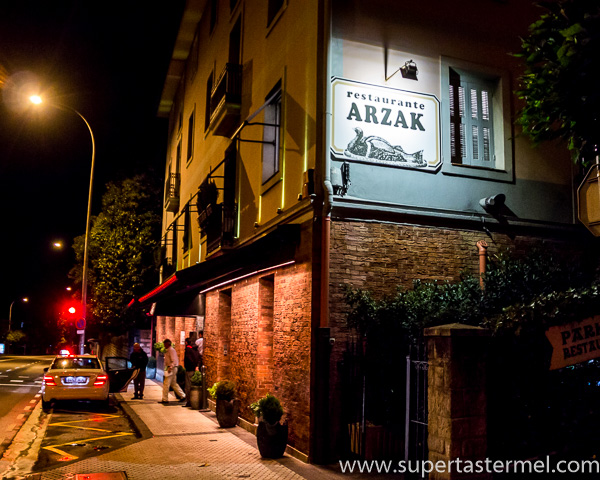 Although the restaurant looked pretty rustic on the outside, the interiors were more chic and modern with stark white walls and black furnishings. There were two dining rooms - one upstairs and one downstairs - and the spacing between the tables were comfortable enough as we settled in for a long meal. 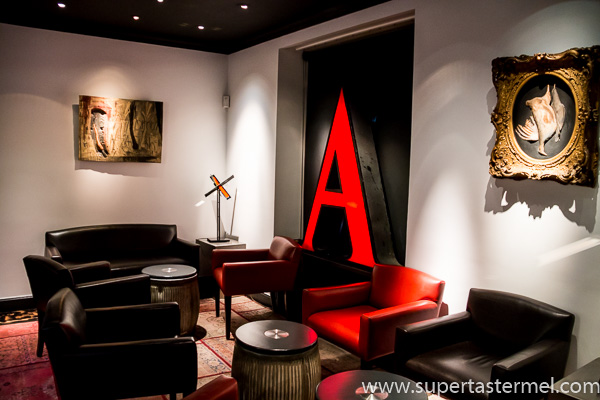 We opted for the tasting menu which came with two choices for the fish and meat dishes so we got one of each to try. 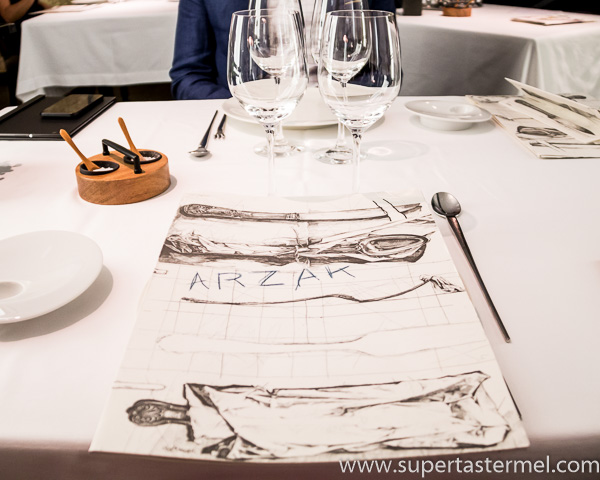 We started with a series of amuse bouche which were all presented in a very creative way - Moringa and prawn gyoza, Banana and squid, "Txistorra" with beer and mango, Marinated sardine and strawberry, and Raspberry bitter. All of them were packed with delightful flavors and it was a great way to start our meal! 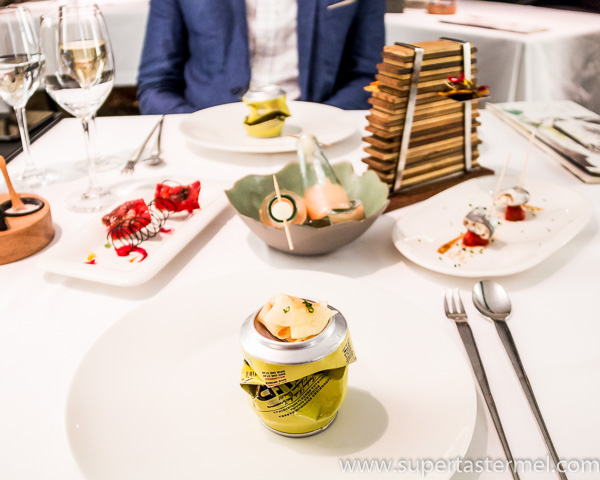 The first course was a gorgeous Fish of the Day which had been marinated with "patxaran" (a sloe-flavored liqueur) and dusted with purple corn. The fish tasted fresh enough but the flavors were on the light side and not that memorable. 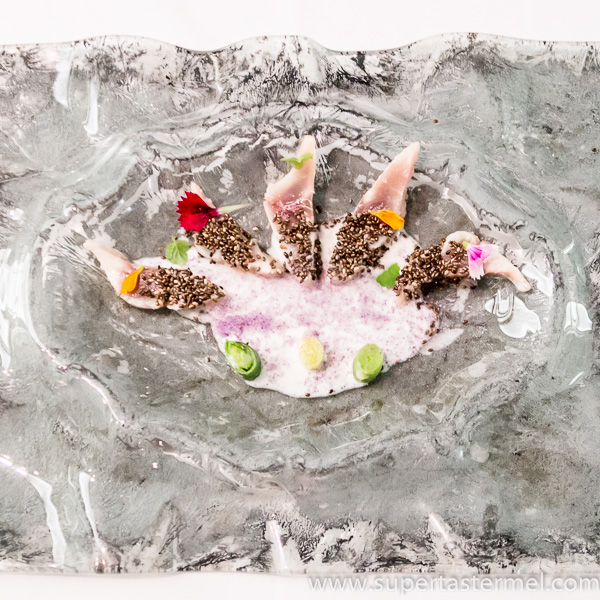 The Scarlet Prawn was more impressive with marinated prawns on lemon grass and mint served with an unctuous preparation of beetroot and crunchy krill. The prawn was super flavorful and I was especially impressed with the sauce which had many layers of flavors. 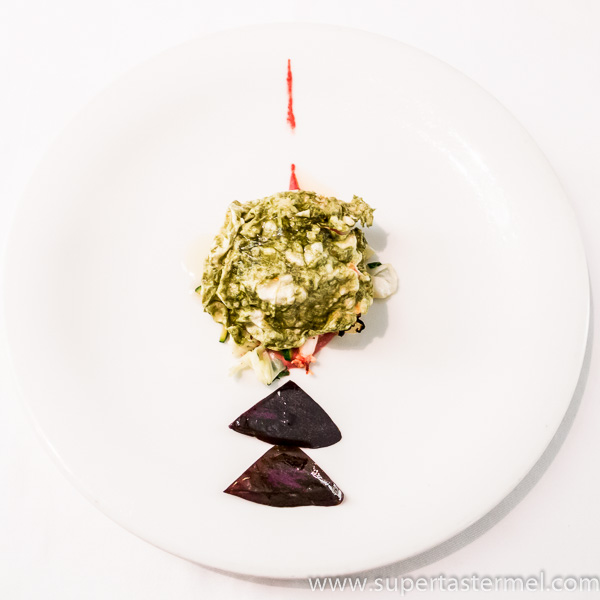 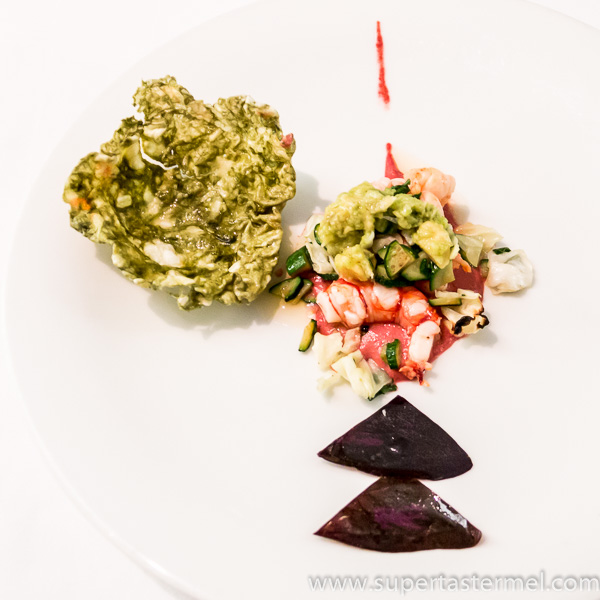 The Red Space Egg was another impressive-looking dish with a "red" egg cooked at 65° C, red peppers, cereal ferments and crispy pig's trotters. I broke the egg's outer layer which released a gush of egg yolk lava and the flavors were rich and satisfying. 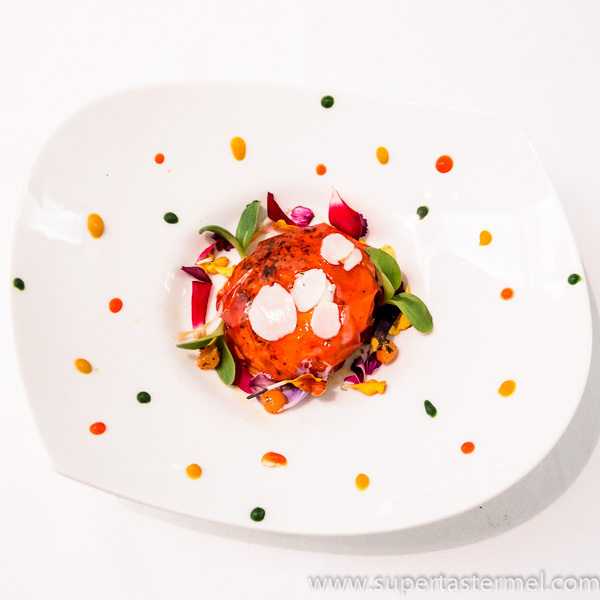 The clever presentation continued with the Monkfish Cleopatra where the monkfish had been grilled with pecan nut paste and decorated with hieroglyphics forms of pumpkin and chickpea on the side. The taste, however, failed to impress as the fish was a bit tough and bland. 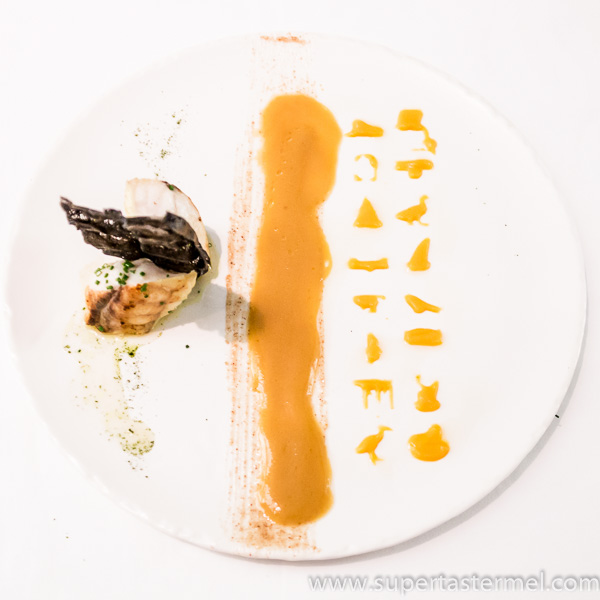 The Tuna's Sea with white tuna and green melon waves served with jack fruit sauce was slightly better but both of the fish dishes were lackluster in general. 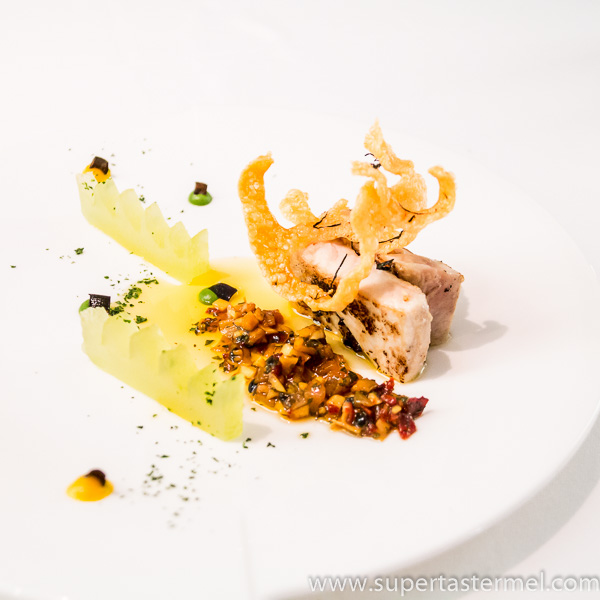 The meat dishes were another mixed bag as the colorful Pigeon with traces of mastic accompanied by feathery textured potato was a success with its perfectly-textured meat and delicate flavors. 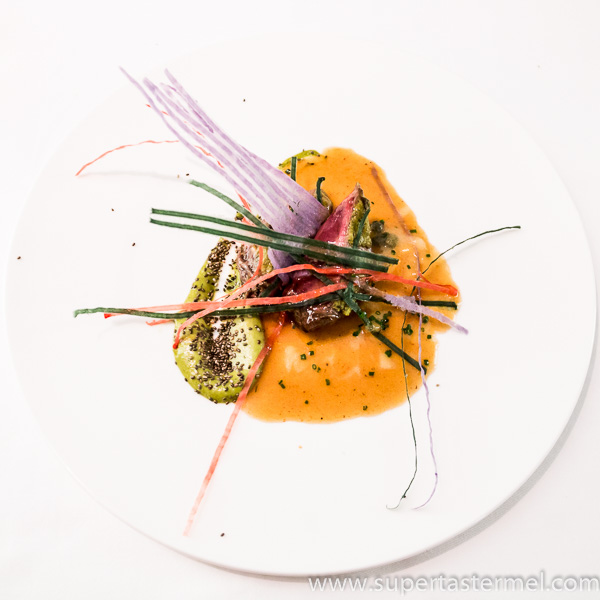 The Lamb with Cypress Aroma with roasted lamb loin over a nut and armagnac spread accompanied by yuca and "guitar" shavings was a disaster though as the lamb was too tough and chewy to eat. The presentation was cute though with an animated video of flames under the lamb but J thought it was a bit gimmicky at the same time. 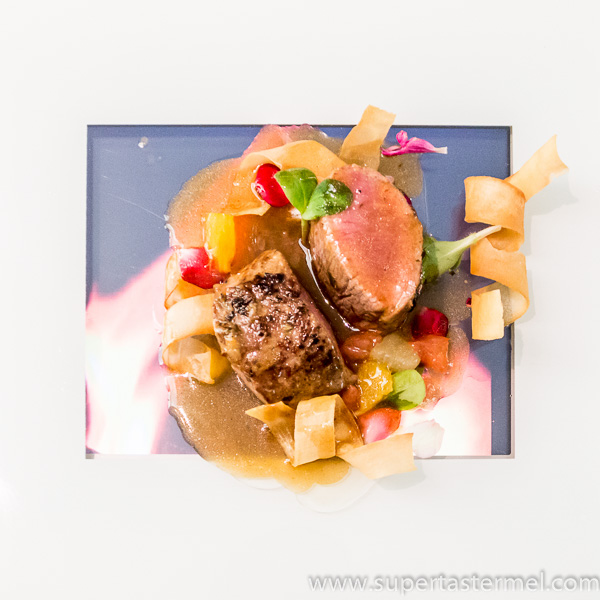 Our meal quickly picked back up though with a refreshing Acai Granita which consisted of a delicious yuzu ice cream "sauced" with acai and fruit. 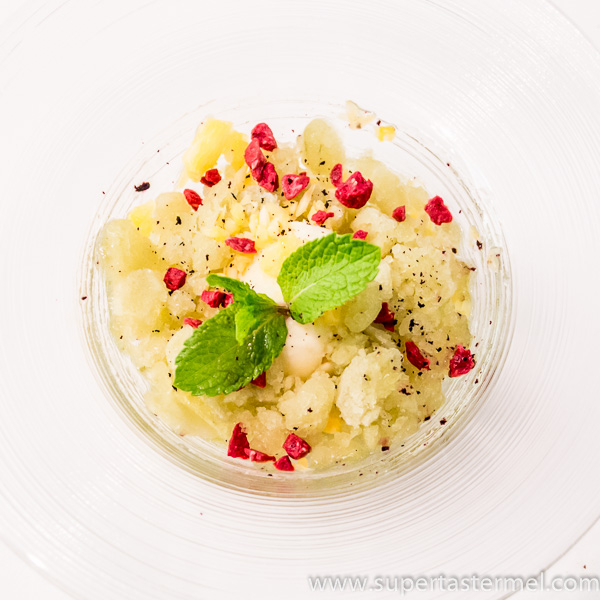 We were then surprised with a celebratory dessert for our anniversary and the staff offered to pack it for us to eat the next day since we still had more desserts to come. The Square Moon with lunar chocolate cube with a fluid core of mint, neroli and kiwi was my favorite out of all the desserts with its deliciously sweet and tart flavors.

I forgot to take a picture of the Big Truffle where hot chocolate was poured over the largue cocoa and sugar truffle which revealed a creamy chocolate and carob filling. It was really rich and definitely one for chocolate lovers.

Lastly, our petit fours came with more chocolates in a bird cage! Each chocolate was filled with liquid and while I thought initially they would have been too rich for me to finish, they were surprisingly light and refreshing with fillings of green apple, strawberry and mojito. 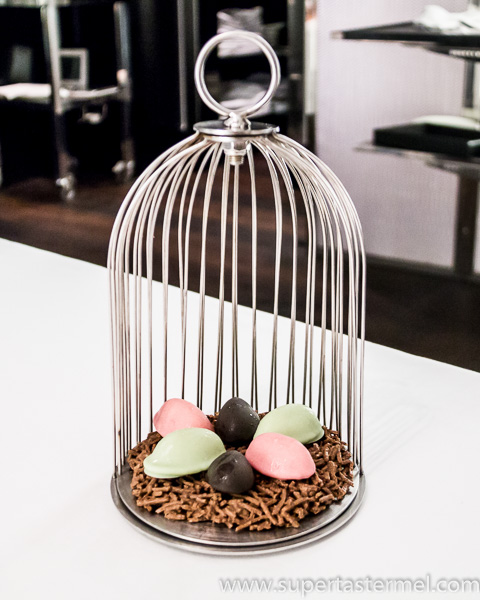 It wasn't that I didn't enjoy my dinner but I guess I expected more from a restaurant that has received as much praise and accolades as Arzak. The mains were a bit disappointing while the appetizers and desserts were stronger. The service was impeccable though from the sommelier who recommended wines for us to the restaurant manager who took care of us throughout the meal and to Elena herself who took the time to explain her dishes to us in a very detailed manner.