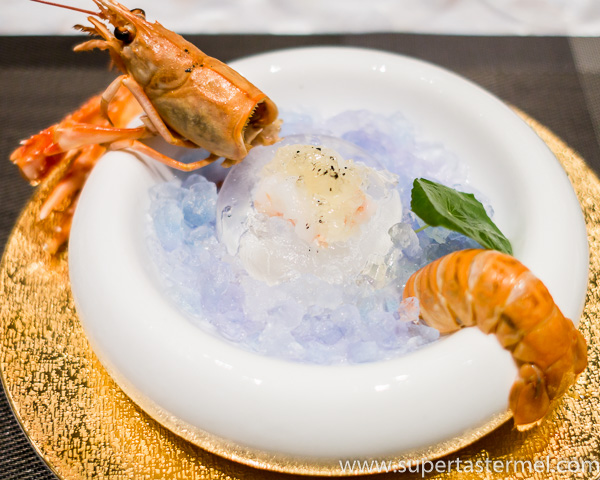 I'll be off to Japan again soon but before that I recently had the opportunity of trying some really good Japanese French fusion cuisine at the new Dining at Murasaki in Causeway Bay! Most of the ingredients are sourced directly from Japan such as meat from Kagoshima, seafood from Hokkaido and vegetables from Nara in order to deliver the most authentic flavors. Located in Sino Plaza, the upscale restaurant has a lot to offer including a sleek bar, a dreamy dessert corner, and dedicated areas for sushi and teppanyaki. 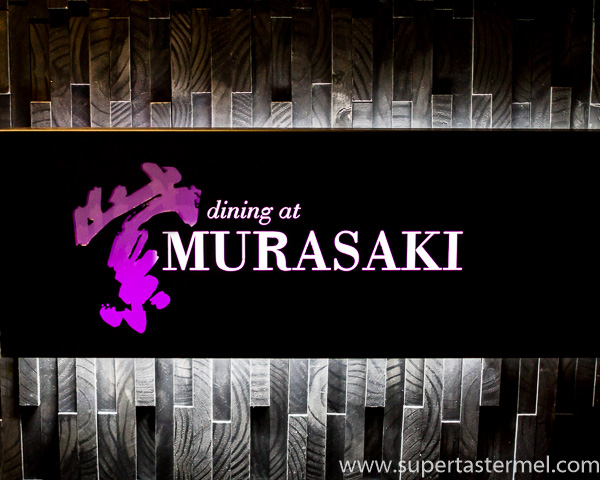 As you enter the restaurant, you will pass by the bar area which serves high-end alcohol including champagnes, wines, whiskeys and sake. 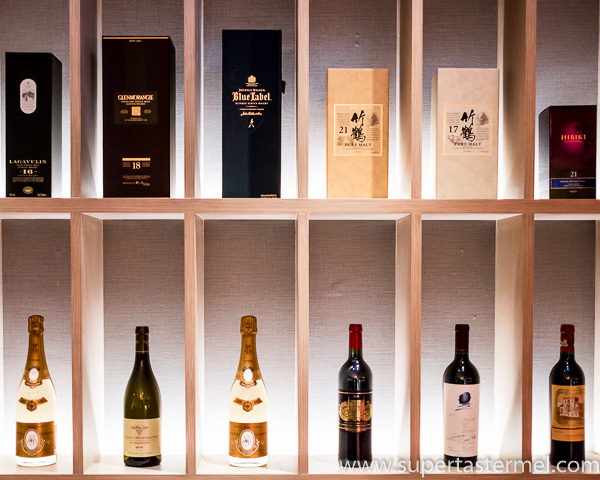 The main dining area is well-lit and spacious while tthere are more secluded seating along with two private rooms. 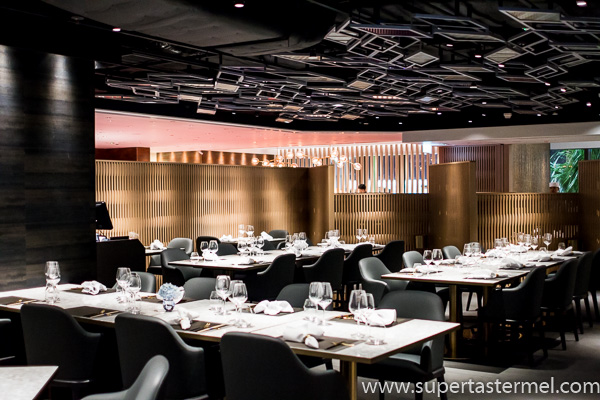 Check out this gorgeous and dreamy dessert corner - I totally wanted to try all the sweets on display! 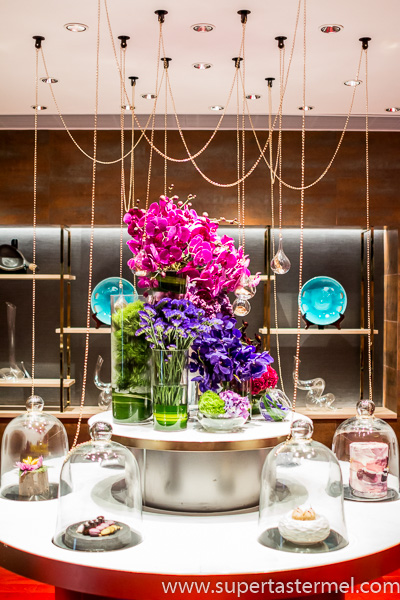 We dined in one of the private rooms for our dinner which was decorated in shades of purple since the name of the restaurant Murasaki means purple in Japanese. The color signifies luxury and elegance which is apparent in the utensils and plates used here. 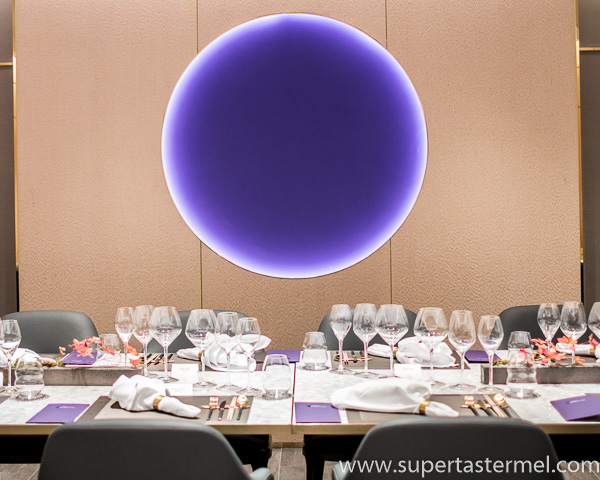 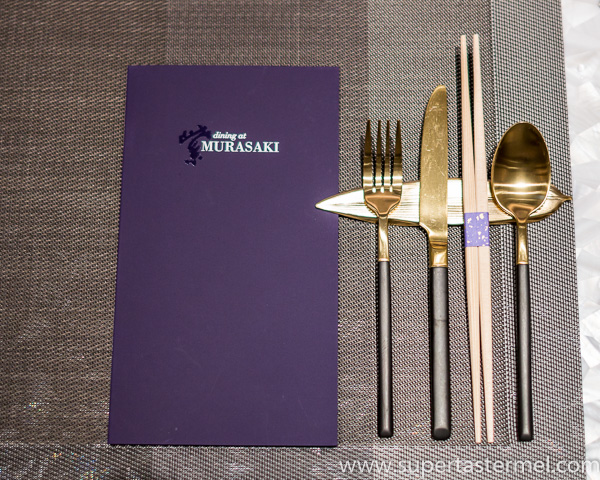 We started with the Matsutake Mushroom Droplets which was served on a tree stump where everything was edible including the "rocks" (it's toasted bread crumbs). The Matsutake mushroom was encased in a jelly while the two smaller droplets released a shot of broth into my mouth as I bite into them. I loved the creative plating here which looked like raindrops on leafs while the flavors were well-balanced. 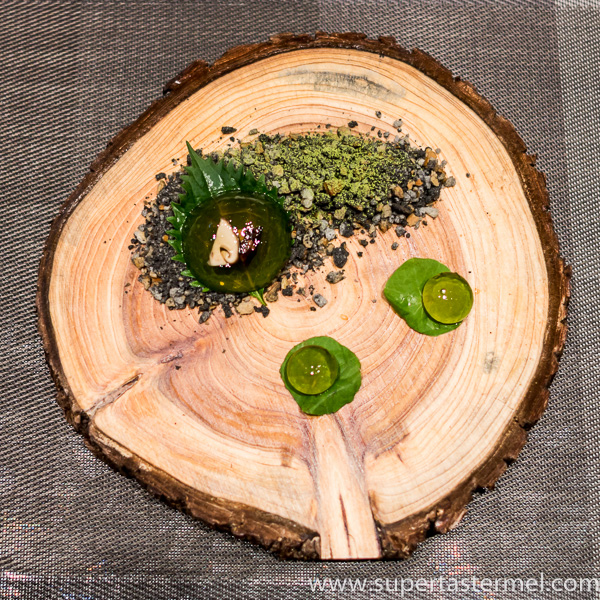 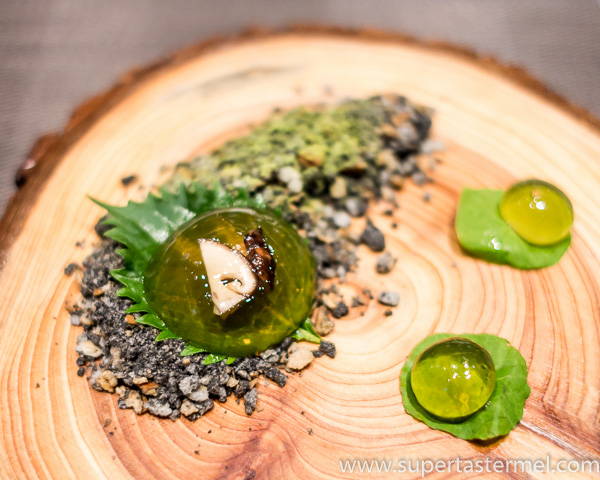 The presentation of the dishes continued to impress with the Spanish Langoustine with Bonito Jelly and Honey Citrus Sauce where the flesh of the langoustine arrived floating on a a block of ice between the shell of its head and tail. The combination of the langoustine, bonito and honey citrus worked well in a refreshing way.

The Japanese Hamaguri Clam Sake Soup was soothing to drink with sweet and umami flavors. 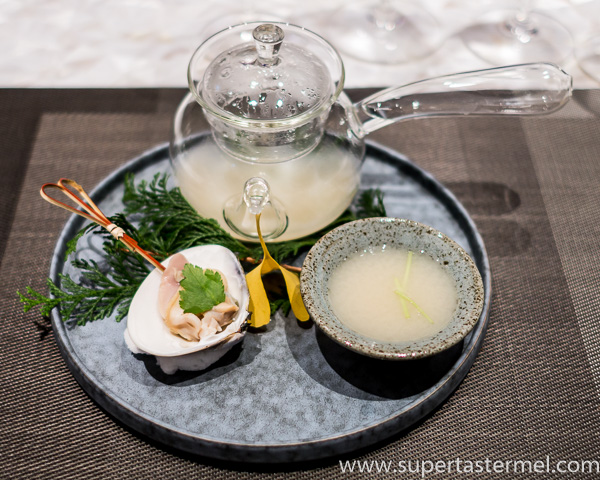 I liked the sauces in the Grilled Kinki Fish with Salmon Caviar Foam but I thought my fish was a bit overcooked while others said their pieces were just right. 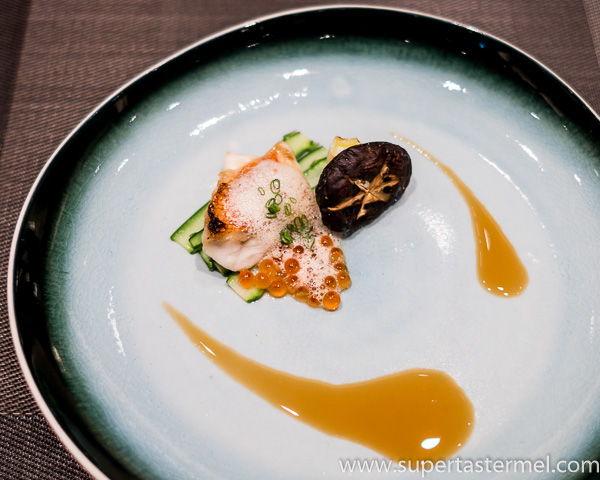 For mains, we got to choose from two options with the first being this flavorful Sous Vide Iberico Pork with Peppercorn Mustard. The pork was cooked perfectly while I absolutely loved the rich and spicy sauce. 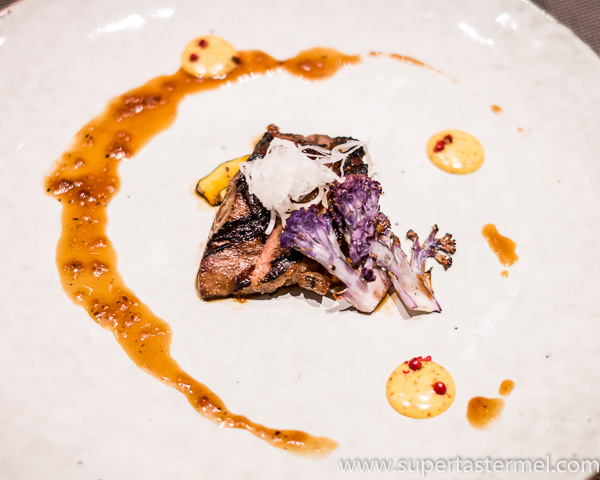 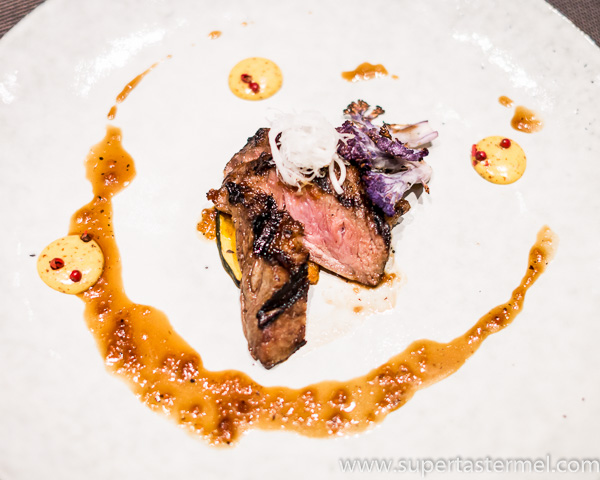 The other option Pan-fried French Quail with Onion Charcoal Chasseur paled in comparison though as the flavors were rather light while the quail could have been seared even more for a crispier skin. 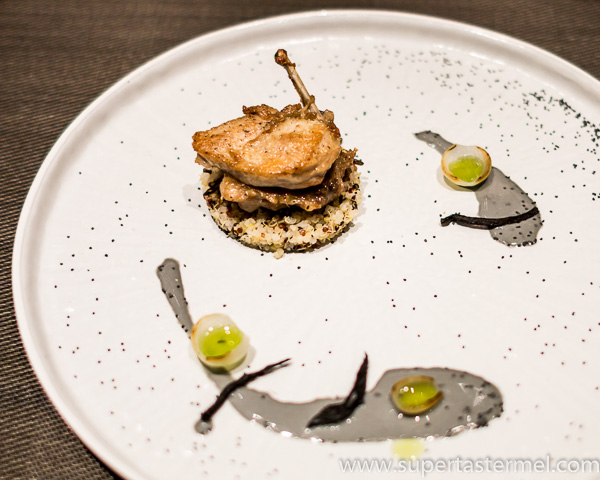 The Japanese Abalone Stone Rice in Soup was my absolute favorite dish of the night as it was full of umami flavors! The secret is to add the garnishes on the side including seaweed, sesame oil, green onion and most importantly black pepper which really brought out the rich flavors of the dish. On the side we also got to try the Eringi Mushroom Pasta with Moro Miso which is usually on the vegetarian menu. 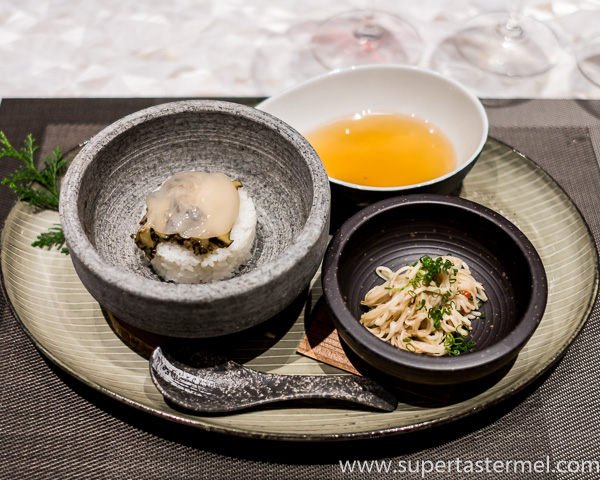 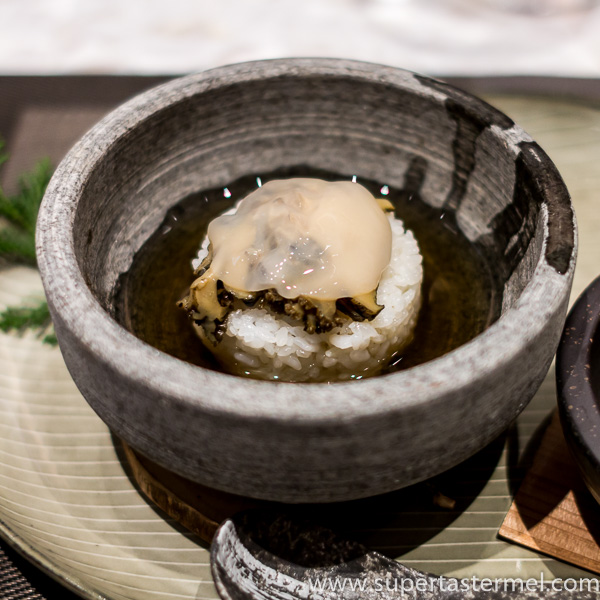 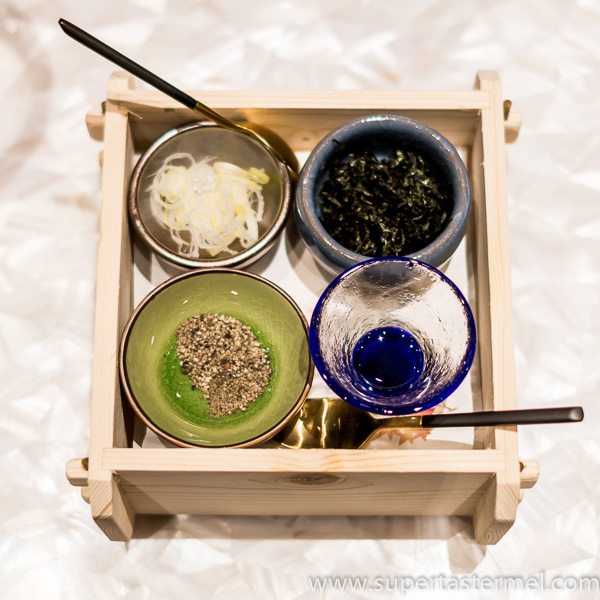 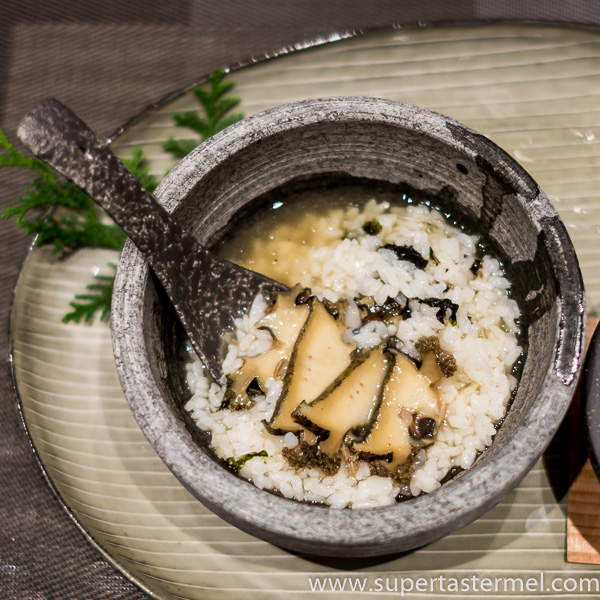 As we switched gears to dessert, we were served a refreshing Yamamomo (peach) Sorbet as a palate cleanser which arrived in an absolutely gorgeous white bowl! I have to say that I was impressed with the various cups, dishes and bowls used here which were all procured from Japan apparently. 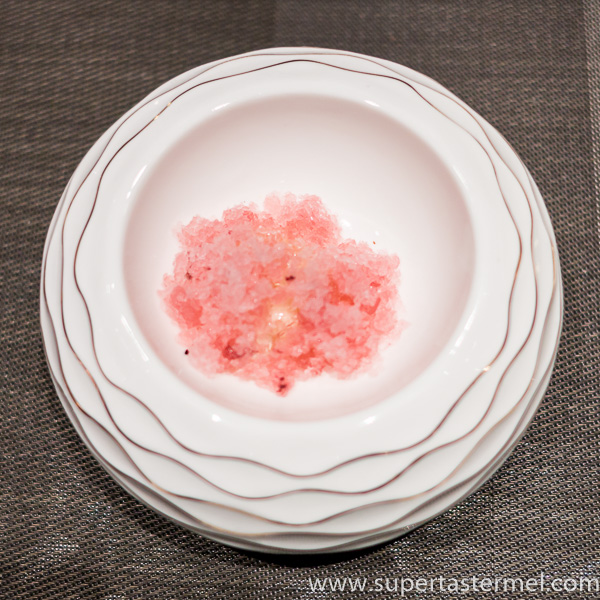 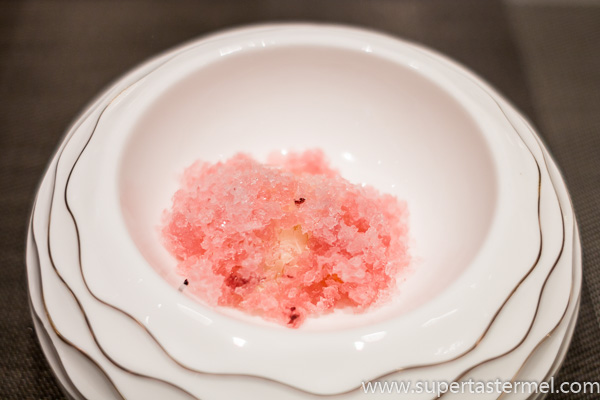 The Purple Moon seemingly pays homage to the restaurant's name with a sweet and delicious combination of purple yam, sweet potato and caramel ice cream. 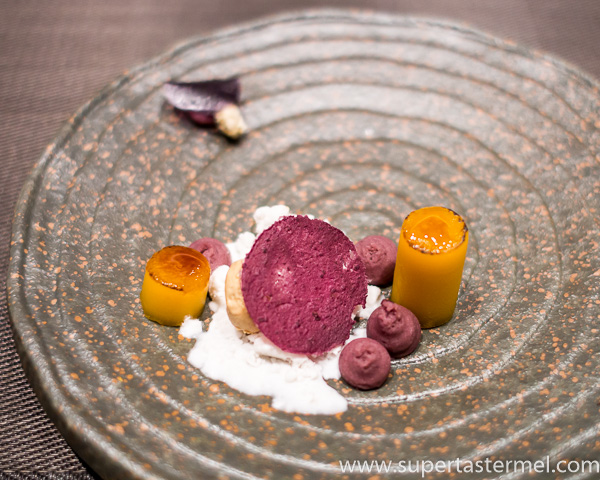 I totally wanted to take this beautiful cup home with me. 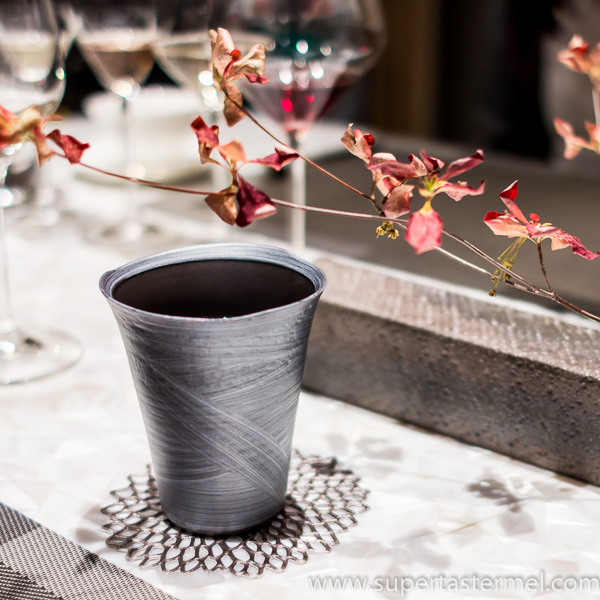 At the end, we also had the sweet treat of trying this special limited edition of sake from Tsukino Katsura (月の桂) which had a distinct amber hue and tasted a bit like Chinese yellow wine! 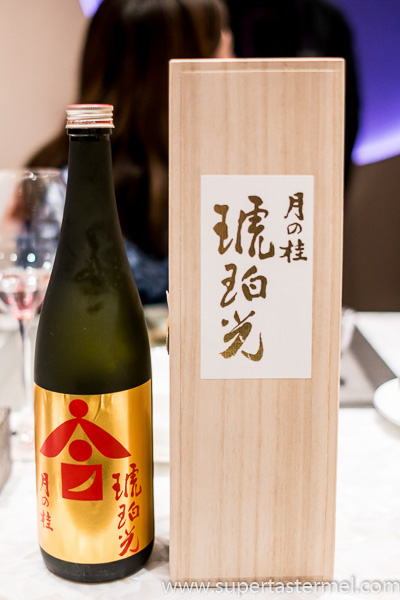