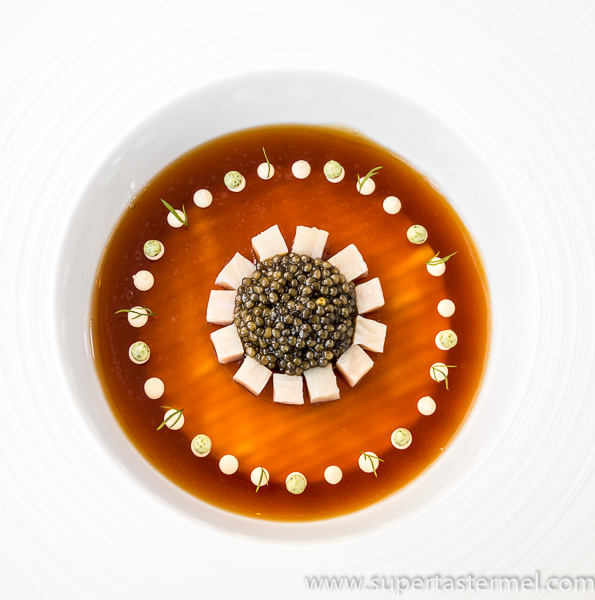 So I just found out that the Michelin Man has a name and his name is Bibendum - after the Latin phrase 'Nunc est Bibendum' which means 'now it's the time drink'! I chanced upon that discovery after having lunch at the newly revamped Claude Bosi at Bibendum restaurant on our last day in London at the recommendation of a friend. Located in the iconic Michelin House (which used to be UK's Michelin headquarter back in 1911), the restaurant had recently been taken over by Claude Bosi who held 2* at Hibiscus until it was closed in 2016. I've never been to Hibiscus or the old Bibendum so my review is from a fresh pair of eyes. 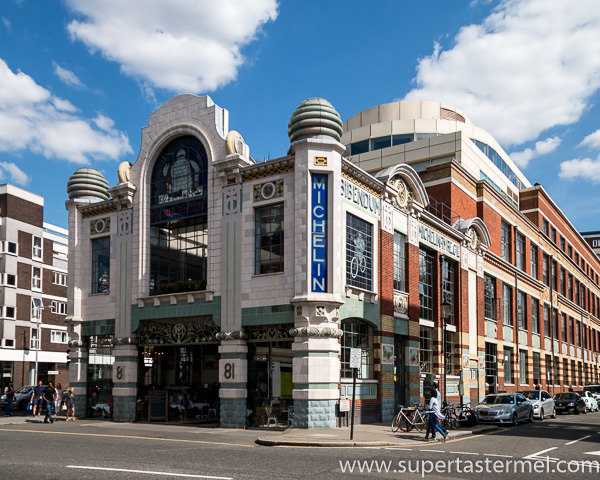 My friend had suggested that we came here during the day so that we can bask in the sunlight through the two gorgeous stain glass windows with Bibendum on it. Aside from the windows, you can find Bibendum everywhere in the restaurant from old posters, statues and even on the butter dish! 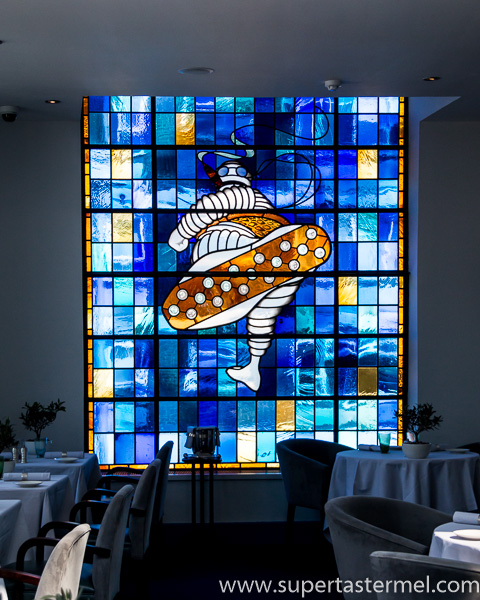 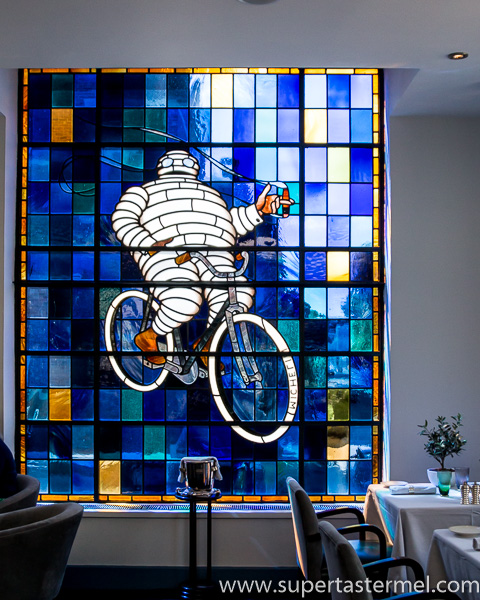 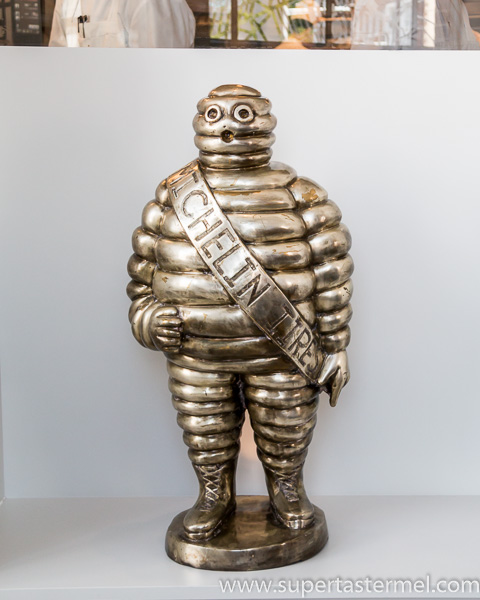 The Bibendum butter dish may be cute but the real star here was the delicious sourdough bread which came from Hedone. 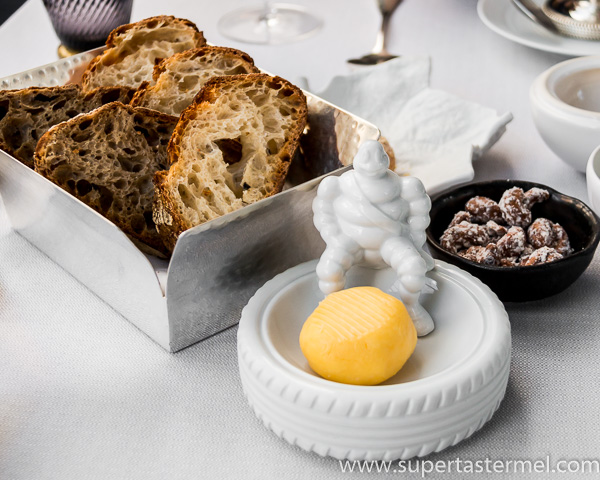 We ordered from the a la carte menu and were given a few casual snacks to start with including bowls of cashew nuts, olives and cheese goujeres. Surprisingly my favorites were the cashew nuts which had been coated with a layer of malt vinegar powder on the outside. 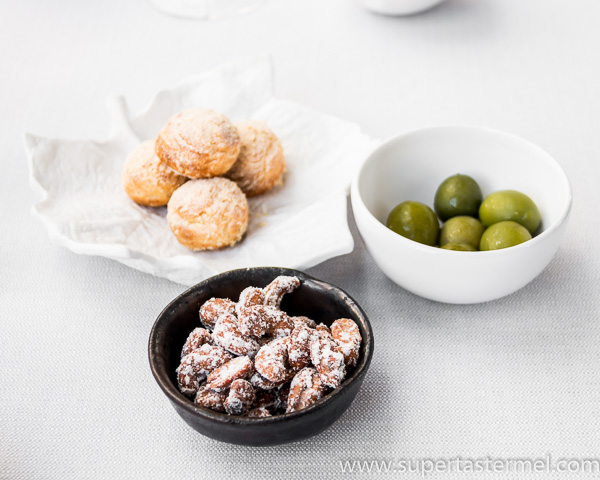 Our next amuse bouse was an elegant sweet corn with coconut foam and popcorn powder in a hollowed-out eggshell. 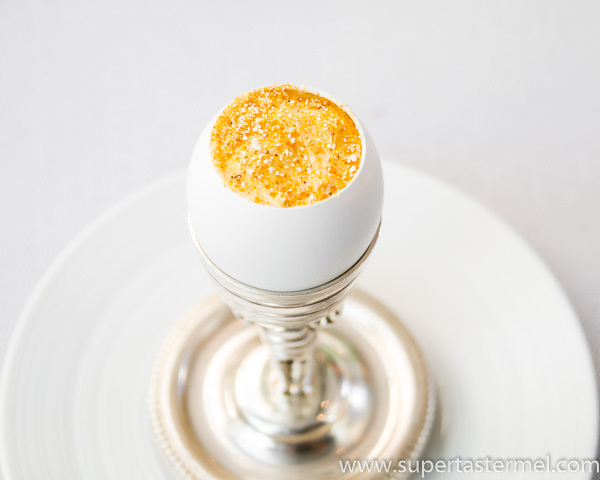 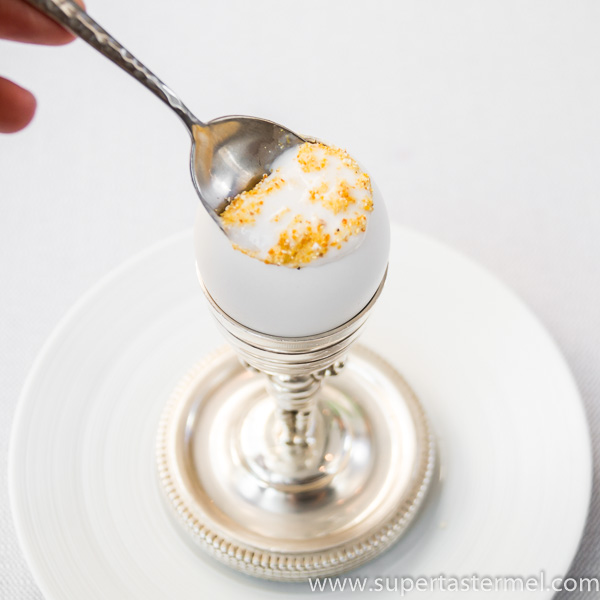 The gorgeous Duck Jelly with Oscietra caviar, spring onion and smoked sturgeon (£39) has quickly become a signature here with its elaborate plating. Looks aside, I enjoyed the flavors of the duck consomme and cubed sturgeon which came together nicely like a perfect marriage of land and sea.

The Cornish Cock Crab with white peach and pickled baby peach (£32) was certainly a bold and interesting combination. The crab with a rich crab sauce and the floral peach jelly were each very good by themselves - however, I'm not sure that the flavors really worked together but at the same time they don't NOT work together either. 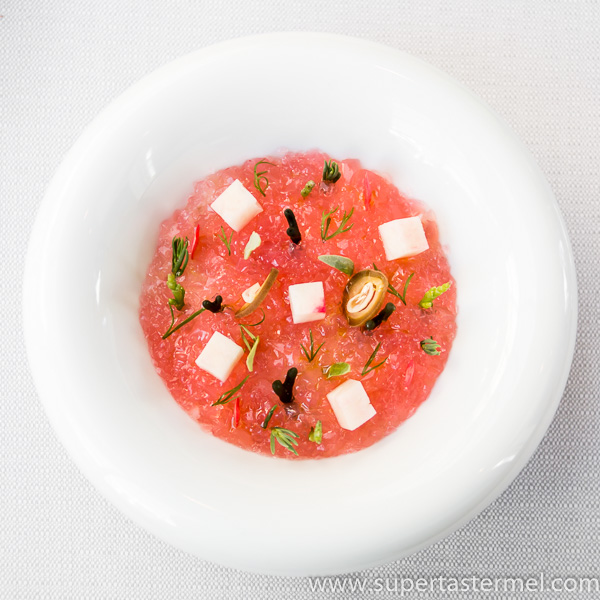 The Cornish Turbot with 'Grenobloise' (£36) was solid with a flavorful sauce of browned butter, capers, parsley, and lemon. 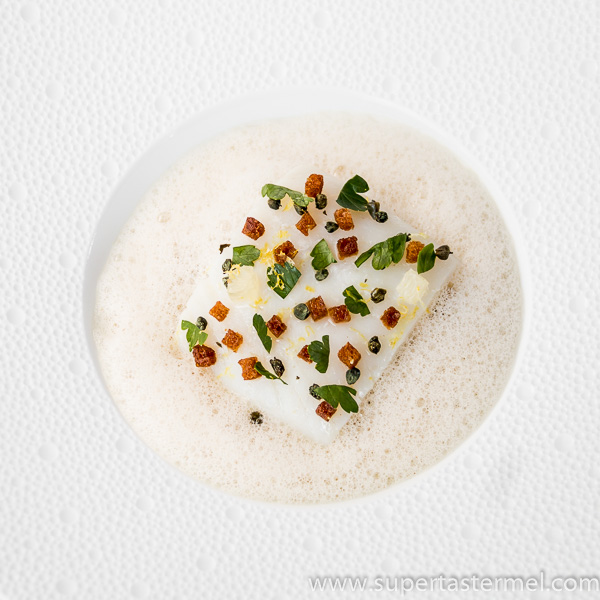 The Brittany Rabbit with langoustine and artichoke barigoule (£34) was another rather bold choice of combination. I've never had langoustine with rabbit before and I think it worked - the langoustine sauce was super delicious which went wonderfully with the rich flavors of the rabbit. 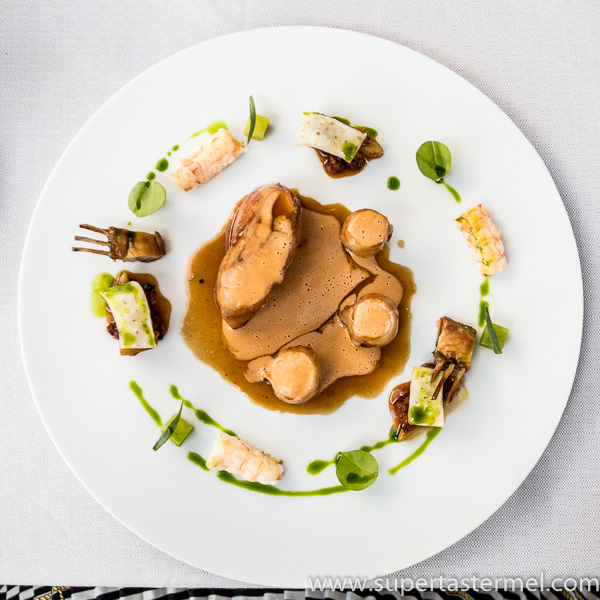 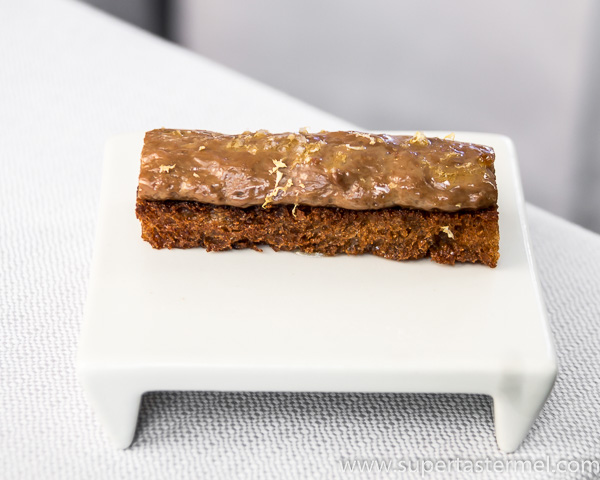 When it was dessert time, we were given a new set of napkins with Bibendum on it. 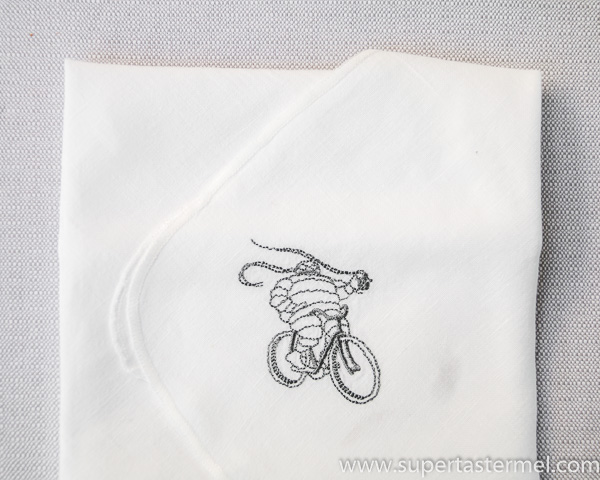 The New Season Paimpol Beans Millefeuille with earl grey ice cream (£12) was rather lackluster and disappointing as the flavors were bland (although the pastry was really nice and flaky). 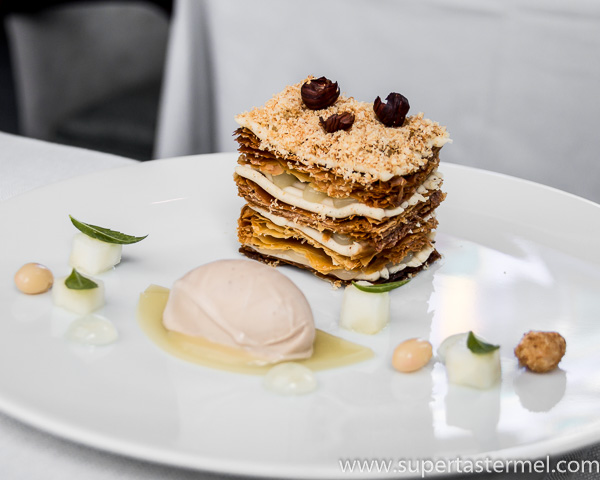 The Bibendum Chocolate Souffle with Indonesian basil ice cream (£14) redeemed the previous dessert though with its super fluffy deliciousness! We had to cut into poor Bibendum before stuffing him with basil ice cream and it was so good we finished this in seconds. 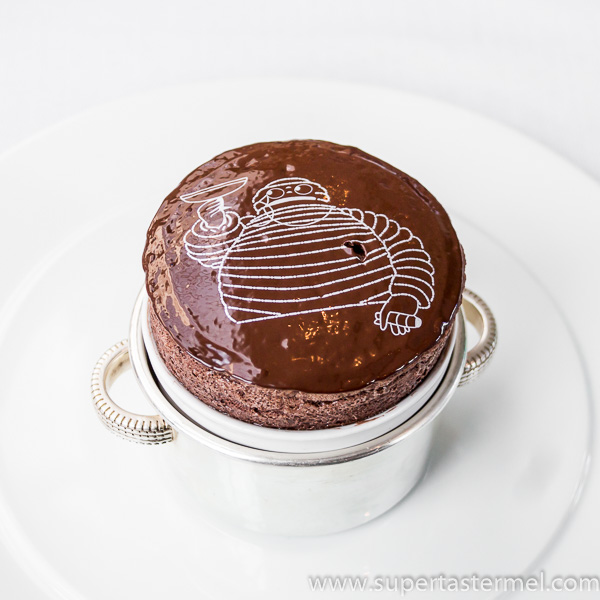 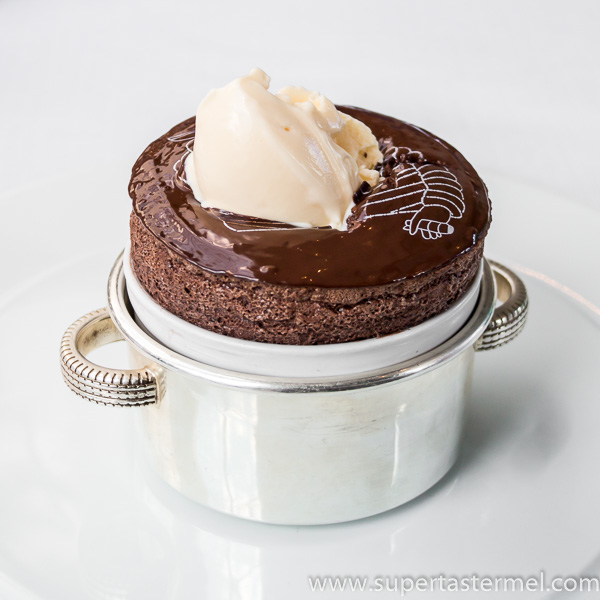 Lastly, a few petit fours to finish the meal. 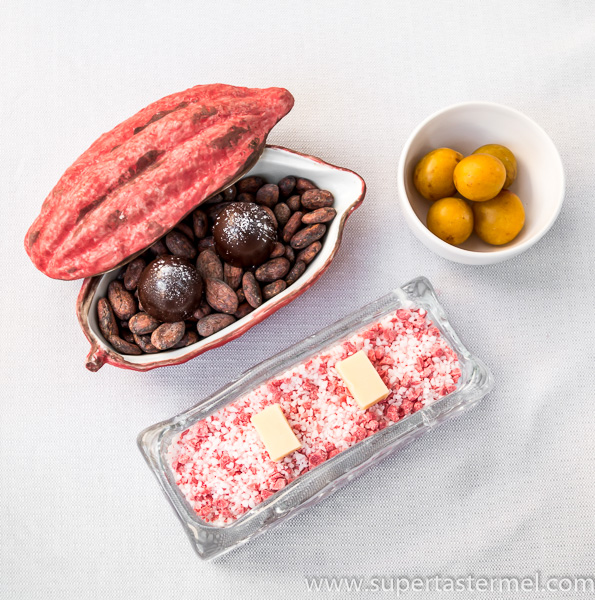 Ironically the restaurant inside the Michelin House has never held any Michelin stars but I think with the stellar cooking from Claude Bosi, stars should be in its future. It's not without its fault though. The meal was quite pricey and I expected more from the amuse bouche in the beginning and the petit fours at the end. As it stands, they were adequate but not impressive at all. It may not sound important but it is the first and last chance to leave an impression on diners and meals like this should start and end strong.