Miyajima - One of Japan's Top 3 Views

The third stop of my Japan trip was to Miyajima near Hiroshima! To be honest, this was the main reason we got the JR Rail Pass because the round trip alone from Tokyo by shinkansen is already worth it. The only limitation though is that the rail pass does not cover the Nozomi trains which would take you directly from Tokyo to Hiroshima in 4 hours. Instead we had to take the Sakura/Hikari trains and transfer in Osaka which added an hour to our journey. After arriving at the Hiroshima Station, we transferred to the JR Sanyo Line and got off at the Miyajimaguchi Station so we can take the JR Ferry (covered by the rail pass!) to the island itself. It was a short ferry ride of around 10 minutes and you can already see Miyajima's most famous icon from a distance - the giant red torii gate seemingly floating on water.

Coming to Miyajima to photograph the famous torii gate is one of my photography bucket list in Japan as it is considered one of Japan's Top 3 Views (Nihon Sankei). I was lucky to arrive on a sunny blue sky day but as I was there after noon time, the torii was a bit back lit if you are looking at it from the island so the best time to come here would have been in the morning where the lighting from the sun would be on the torii instead of being behind it. Another thing to pay attention to is when the high tide and low tide would be which would either make the torii look like it's floating on water or make it accessible by foot so you can actually walk out to it. 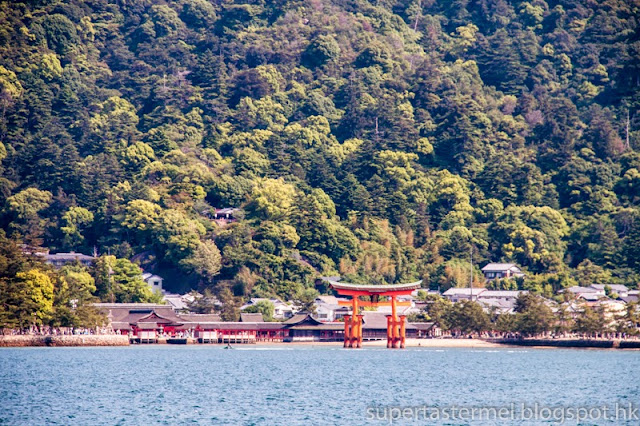 This is the view from the ferry of the torii against the island. 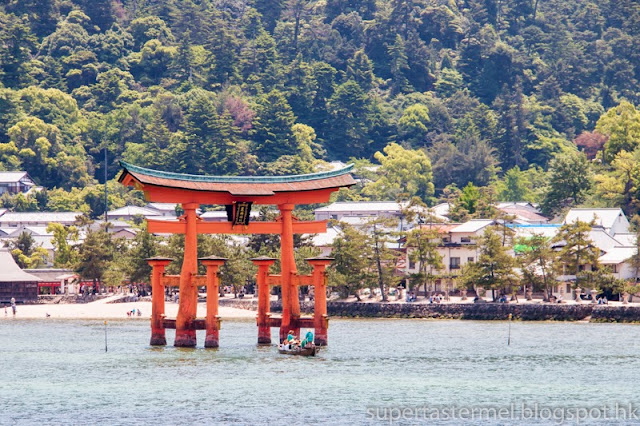 This is the view of the torii on the island itself which is the way it is mostly photographed. 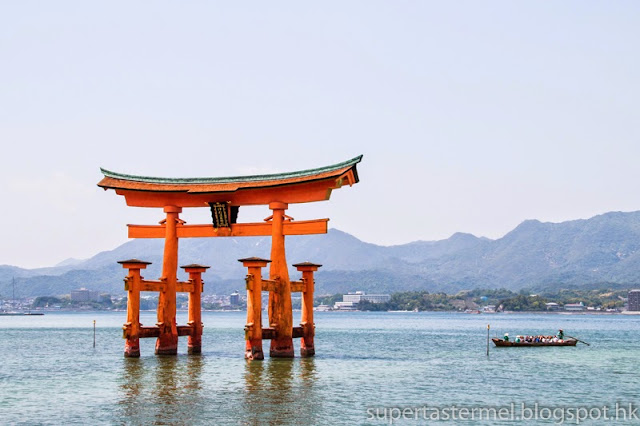 It looks like you can also take boat tours to see the torii up close and personal as well. 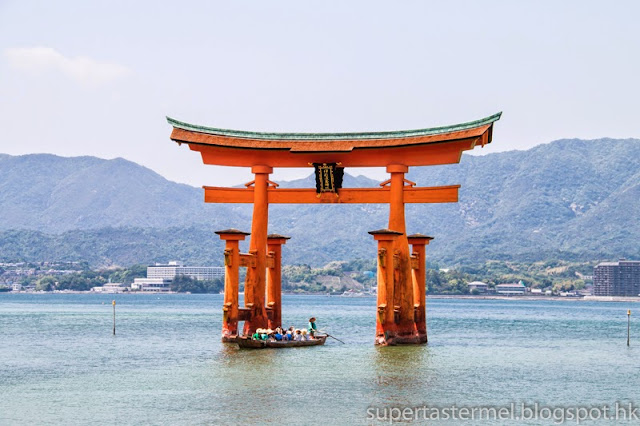 The main reason for the existence of the giant torii gate is to signify the entrance to a Shinto Shrine which in this case is the Itsukushima Shrine. The shrine is also built over water and is dedicated to the three daughters of the Shinto god of seas and storms. The island itself has long been considered sacred and commoners were not allowed to set foot on it to maintain its purity in the past. 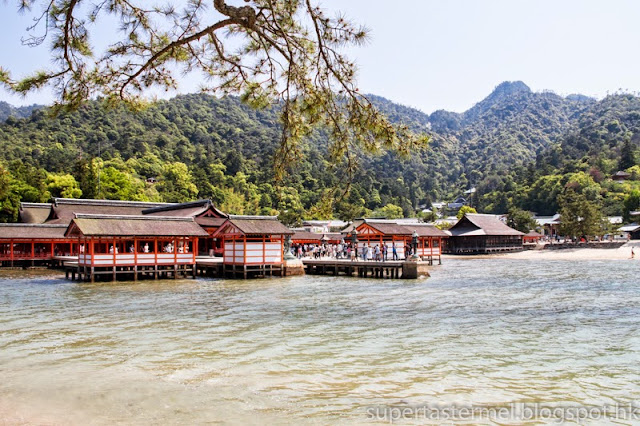 Besides the Itsukushima Shrine, there are many other shrines and temples like the Daisho-in which is a Buddhist template located at the base of Mount Misen, the highest peak in Miyajima. You can take a cable car up to the peak or take one of the 3 hiking trails which takes around 1.5-2 hours from the main part of town. 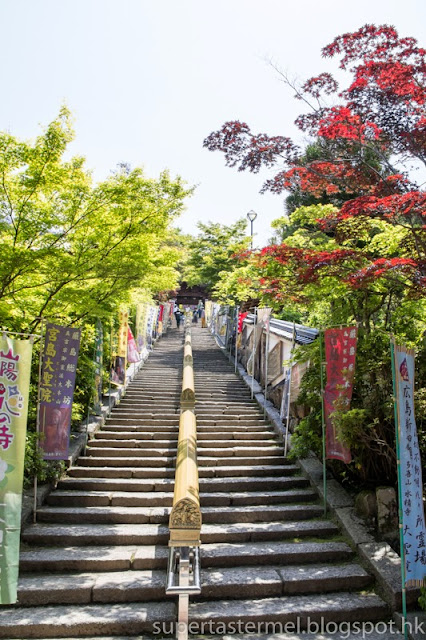 You can also perform an interesting Buddhist ritual here by spinning the metal wheels which have been inscribed with sutra and is said to have the same effect of reading them, therefore getting the blessing from it. 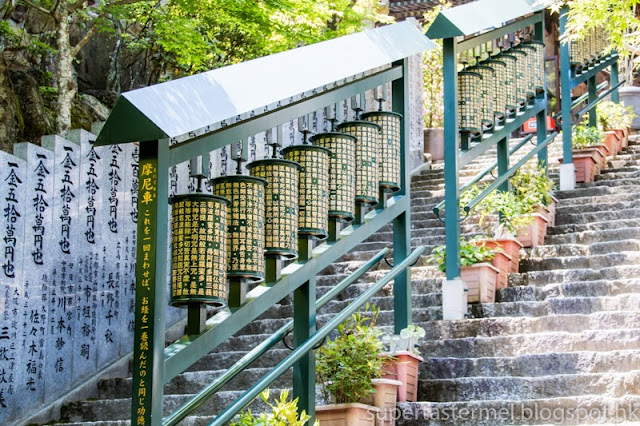 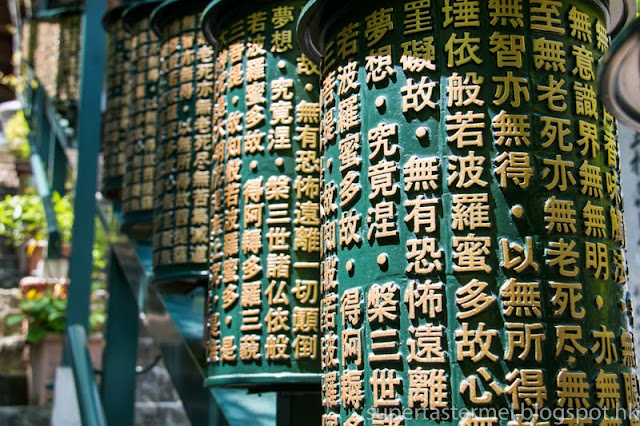 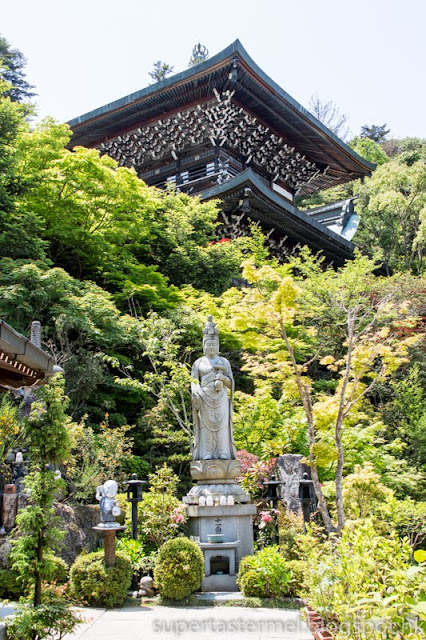 The other popular attraction at Miyajima would have to be the wild deers that freely roam around the island which is similar to the ones in Nara near Kyoto. 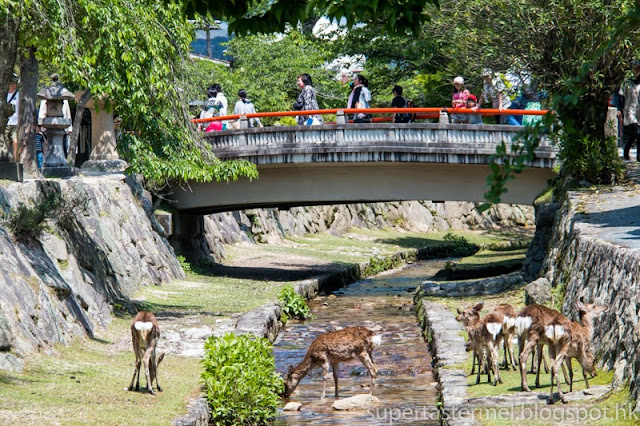 The deers are pretty tame and friendly enough but they seem quite hungry most of the time and like to sneak up on unsuspecting tourists when they are eating to steal a bite. It seems that feeding the deers is not a big thing here compared to Nara where street vendors will sell crackers for you to feed the animals. 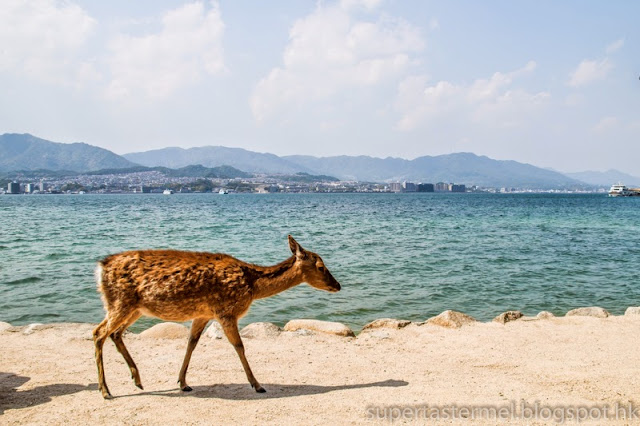 The locals seem to feed the deer though and I saw an elderly woman feed ice cream to the deer! I'm not sure if deer are supposed to eat ice cream but it lapped it up happily in no time. 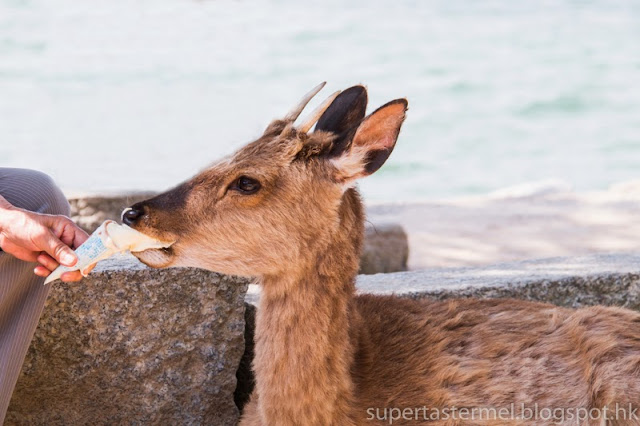 And here the deer are lining up for kakigori (Japanese shaved ice)! Okay that's not completely true - the owner had placed a bowl of food inside the stall so the deer were waiting for its turn to eat it but it made for a funny shot. 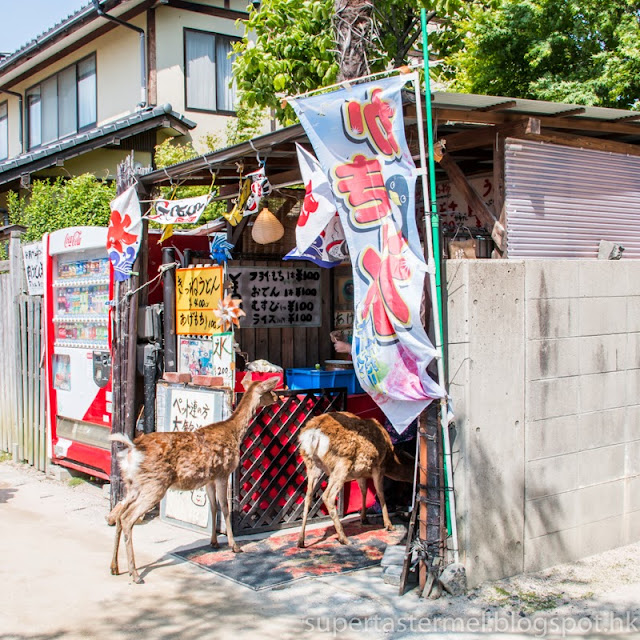 After walking around a bit, we got hungry and even though there were a lot of street food stalls and restaurants in the main strip of town but we decided to take the road less traveled and got a bite at a small cafe called Setouchi Grill Zipang on a quiet street. J just took one look at the restaurant from the outside and said it looked legit so in we went. 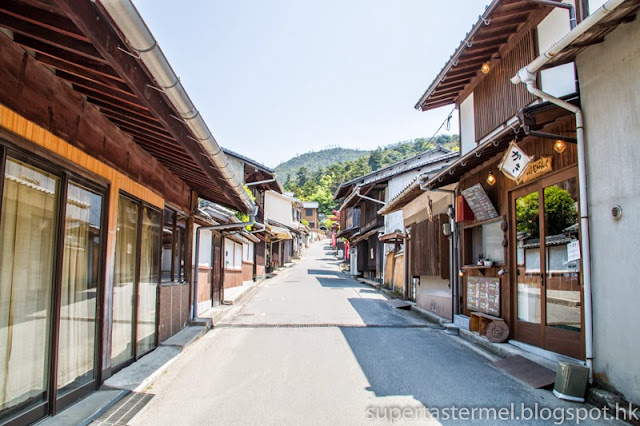 Who knew that Miyajima has its own beer! The pale ale is apparently brewed right on the island, and it was light and floral with decent hops and a bitter finish. 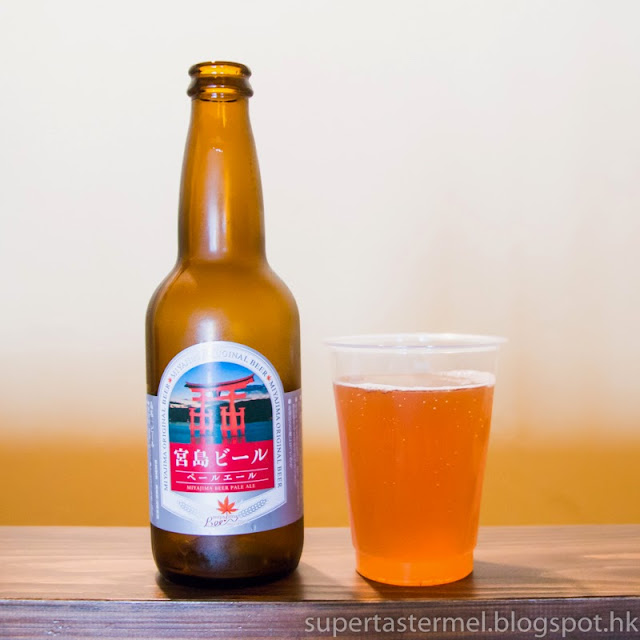 Hiroshima is very famous for its oysters as the prefecture accounts for 60-70% of oyster production in Japan so there were many food stalls that offered grilled oysters along the main street in Miyajima as well. I'm usually not a big fan of cooked oysters but these were really good as the oyster had a firm yet tender texture while it was juicy and smoky with a touch of tanginess from the lemon juices. 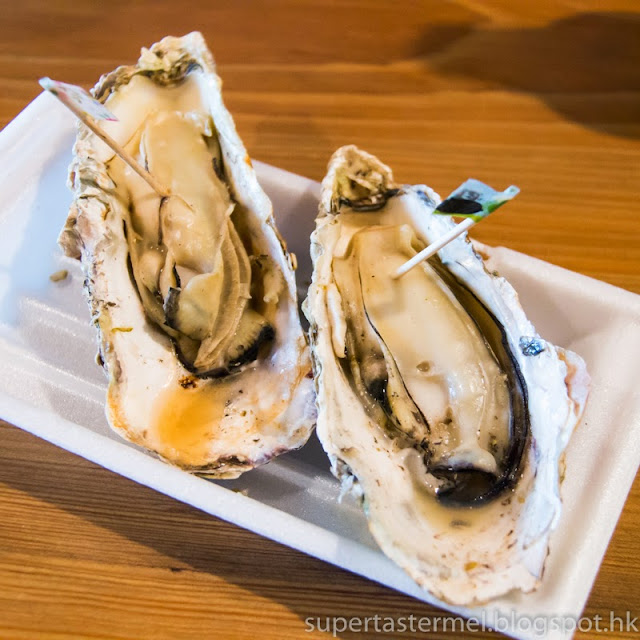 Another famous delicacy here is the anago-meshi which is broiled conger eel over rice. The anago were crispy on the outside yet light and plump on the inside which was complimented perfectly with a sweet and salty soy sauce glaze. Many restaurants on the island serve this but the most famous one is actually located off the island near the ferry port on the main land called Ueno which is said to be the first bento stand that served this to train passengers. 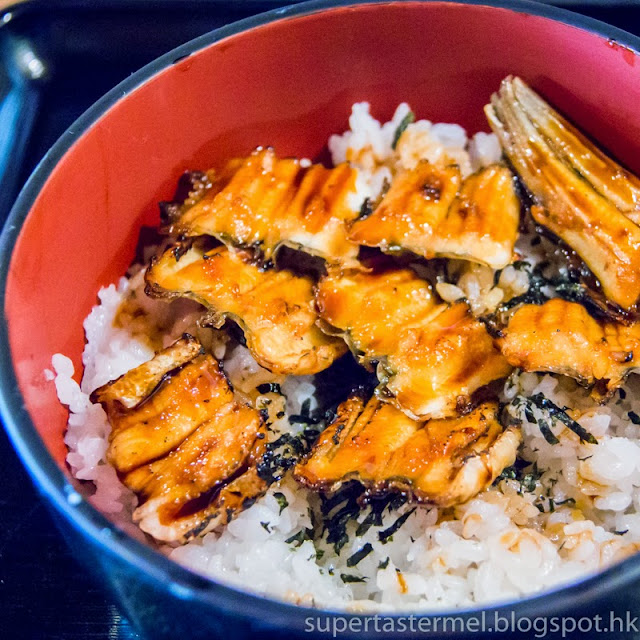 Another form of grilled oyster snack that looked enticing! 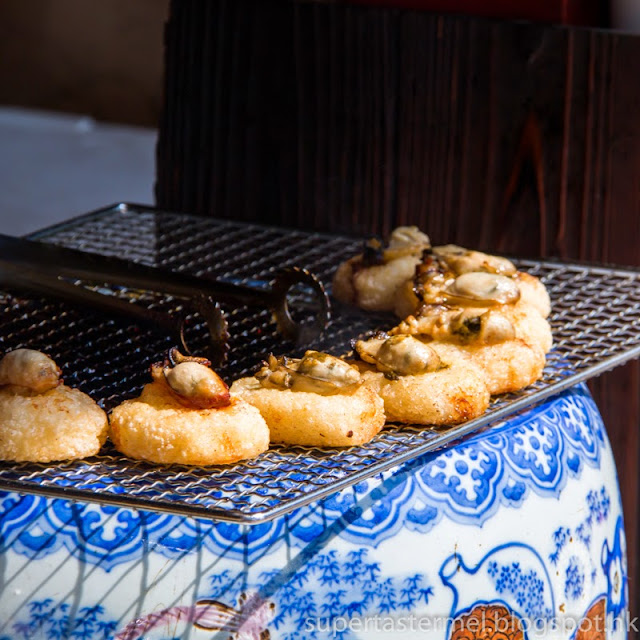 The most popular souvenir from Miyajima are these Momijimanju cakes baked in the shape of a maple leaf with a red bean paste filling. It was created to represent Momojidani which is a popular maple leaf viewing spot on the island. Nowadays these cakes can be found with many types of filling - the one in my hand is actually with matcha filling! 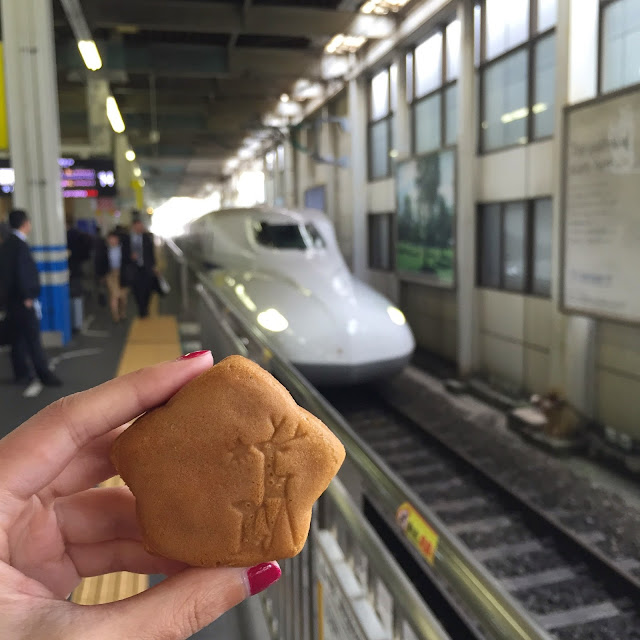 Access: Take the JR Sanyo Line to Miyajimaguchi Station and take the JR or Matsudai ferry to Miyajima. You can purchase the JR Rail Pass through my affiliated link here (there's no additional cost to you but I will make a commission if you click through and make a purchase)!